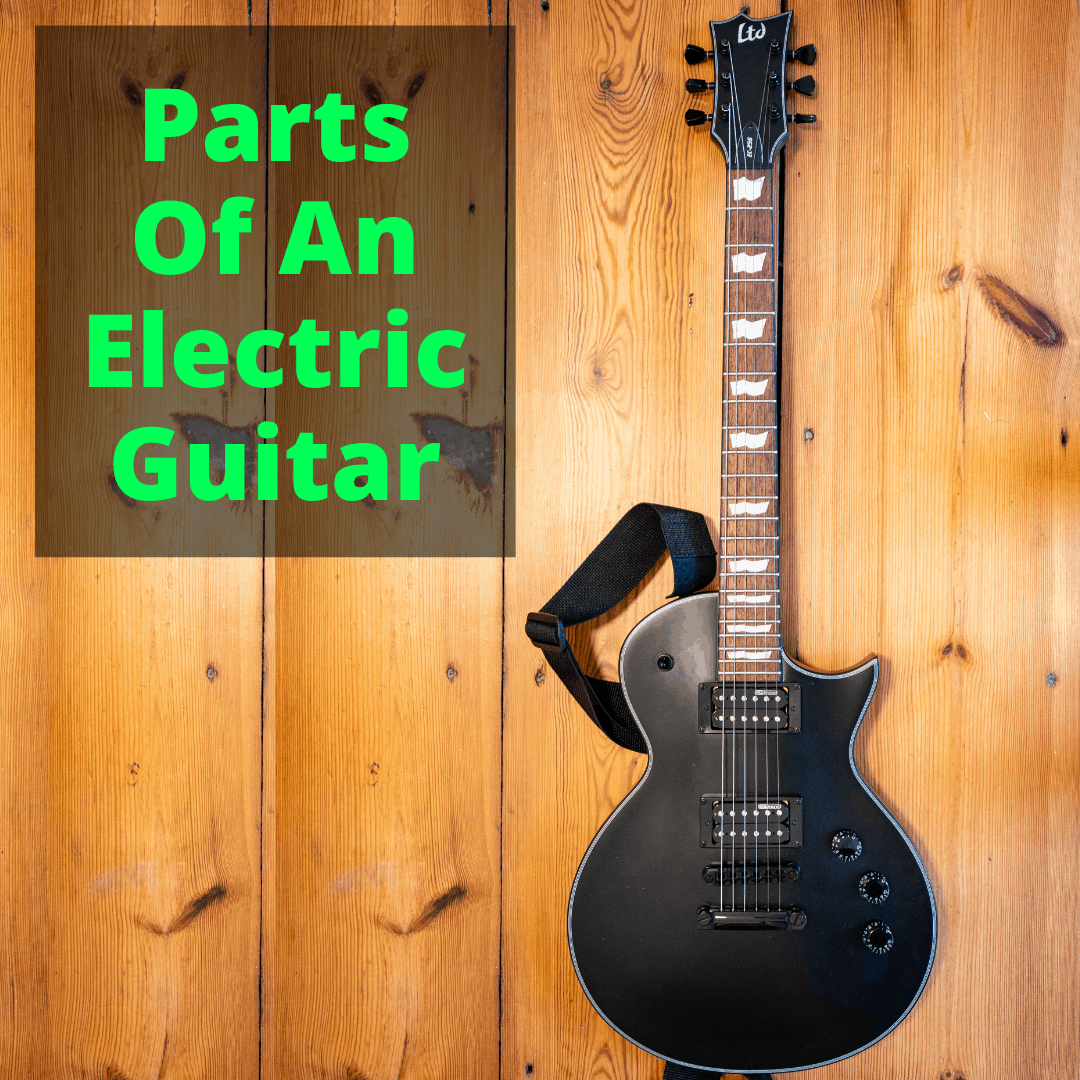 Learning to play the electric guitar is not easy.

And not knowing the parts of your new instruments makes it harder still.

Imagine reading an article about how to properly hold a guitar or watching a video on how to tune your instrument. Would you be able to follow all the instructions correctly, if you do not know what part of the guitar the instructor is pointing out?

You might be able to. But it will be challenging. If you hope to become a successful electric guitarist you need to start with the basics. And the basics include knowing the parts of an electric guitar and their corresponding functions.

Parts Of An Electric Guitar

The table of contents below has a quick list of all the electric guitar parts in alphabetical order. Any type has these parts, be it an electric baritone guitar, a bass guitar, or any other variety.

Now, let us discuss these parts in further detail, including where they are, what they are, what that are usually made of, and what function they perform. All of the photos show a ESP LTD Eclipse EC-256, which is on our list of the best electric guitars for metal. ESP, and their budget subsidiary LTD, are both top guitar brands from Japan.

For parts where there are different varieties for specific playing styles, such as modern bridges or pickups, so you know the differences between them. 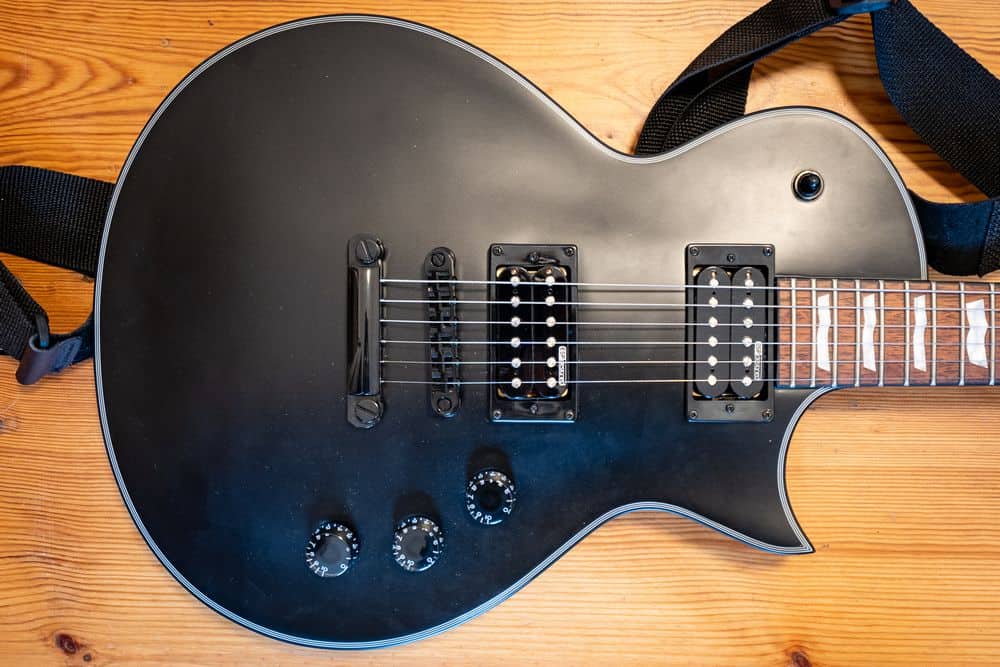 The electric guitar’s body is usually the most noticeable part. It is the big curvy part that rests against your body whenever you hold or play the guitar. It sits underneath the strings and is also the mounting point of some of the electronics that are incorporated on the electric guitar.

Electronics mounted on the guitar body include the bridge, output jack, pickups, selection switch, and the vibrato arm. The strap button is also a typical component that you may find somewhere on the guitar’s body. There may be a pickguard as well.

The body can be built in solid, semi-hollow, or hollow versions. You have probably noticed that most electric guitars have a solid body, instead of the hollow bod of an acoustic guitar.

But there are also electric guitars with semi-hollow bodies, which are hollow, but have a solid piece of wood that goes down the middle. This design helps keep the instrument from howling too much with feedback.

This kind of electric guitar captures the resonance of the guitar strings reverberating with the space inside of the body. However, the pickups are not shielded, so they are highly vulnerable to sound feedback. This means they do not work well with distorted tones. 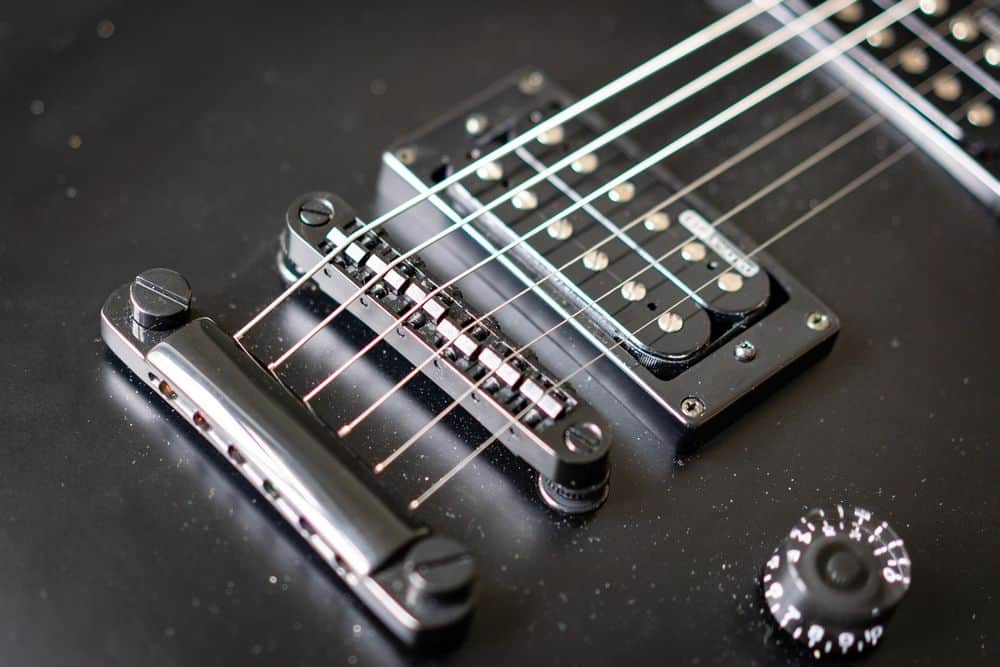 The bridge is the part where the guitar strings are anchored. It is usually found at the lower bout of the guitar’s body. Besides anchoring the strings, it also works with the moving parts called the saddle to set the intonation.

The saddle, which is usually attached to the bridge, can move back and forth to ensure accurate tuning all the way up and down the fretboard. It can also be raised and lowered to adjust the height of the strings over the fretboard. For example, you will want to raise the strings, if you are having problems with buzzing. The fretboard is located on the top side of the neck. It houses the frets and the fret markers. To play the guitar, you need to press the string down on various parts of the fretboard to produce sounds and play notes and chords. It is usually made of wood and is sometimes termed the fingerboard. The fret is the raised element on the fretboard and is usually made of thin metal. They run at regular intervals across the fretboard.

When playing a note or chord that is fretted, it means that you are pressing down a string on the fretboard. This increases the pitch of the notes, because the frets shorten the length of the string that vibrates. Electric guitars can have varying numbers of frets.

Inlays, also called fret markers, come in different shapes. The most common one is a simple small dot. Inlays serve as guides to help you locate the correct fret on the fretboard. These inlays help beginners a lot, until they have played guitar long enough to remember the notes and chords by heart. The head of the guitar is the flat part at the top end of the neck, which holds the tuners in place. Its size and shape vary depending on the brand or style of the guitar. The head also helps determine the arrangement and tuning to a certain extent, by the way the guitar neck vibrates. The neck is the second largest part of the guitar after the body. It is usually made of a long piece of wood with a truss rod inside. The neck is to holds the nut in place, as well as the frets, the head, the fretboard, and the tuners. The truss rod inside the neck is used to adjust the curvature of the neck, which affects how high above the frets the strings are. The nut is a tiny piece of skinny plastic or bone that has slots to hold each guitar string. It has to be cut to the right depth, because this makes a big difference in the sound the guitar makes, as well as its playability. If not correctly cut at the appropriate height, it may create a buzzing sound while playing. 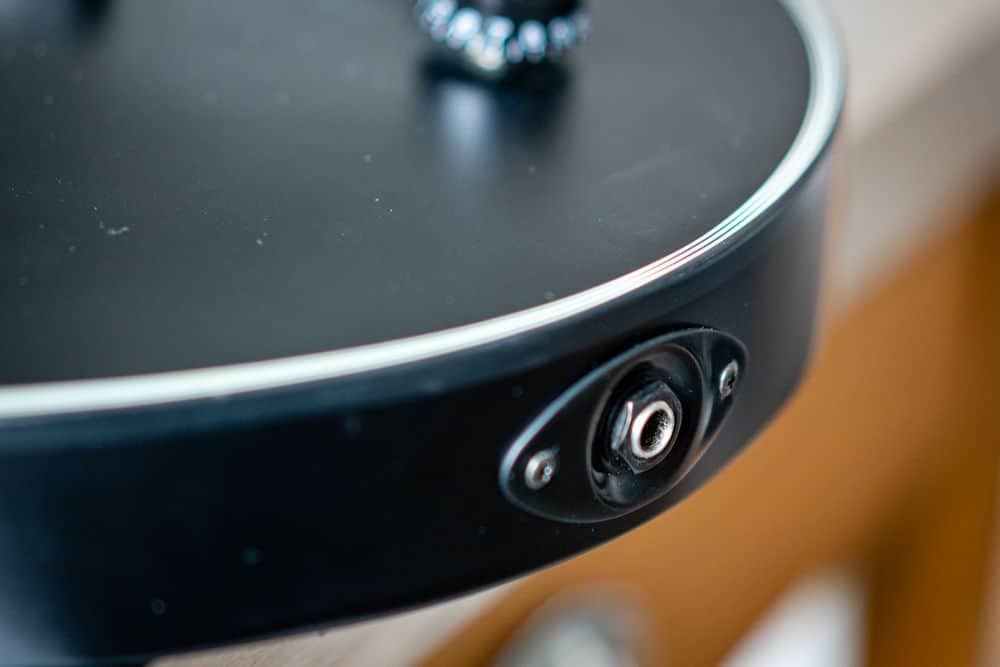 The output jack is the part where the signals of the electric components go. Plugging an instrument cable into your output jack sends these signals to an amplifier that can boost the guitar’s sound. You can also plug your electric guitar into a computer or other device using the output jack.

Pickguards are placed on the body of the electric guitar to prevent scratches or other damage. In some cases, they can also serve other purposes. For example, on a Fender Stratocaster, the pickguards serve as a mount for all the electronic components. The electric guitar’s pickups are the parts that contain the electronic components. Their function is to convert the strings’ movement into small electric signals, which are then transmitted down to the output jack, and then through an instrument cable to an amplifier, or some other component, if you are playing electric guitar without an amp.

There are many different types of guitar pickups, with each producing a unique sound. By changing the guitar’s pickups, you can completely change the sound you get from the instrument.

Most pickup models are associated with certain types and models of guitar. If you put new pickups on your guitar and they buzz, check to make sure they are properly grounded. 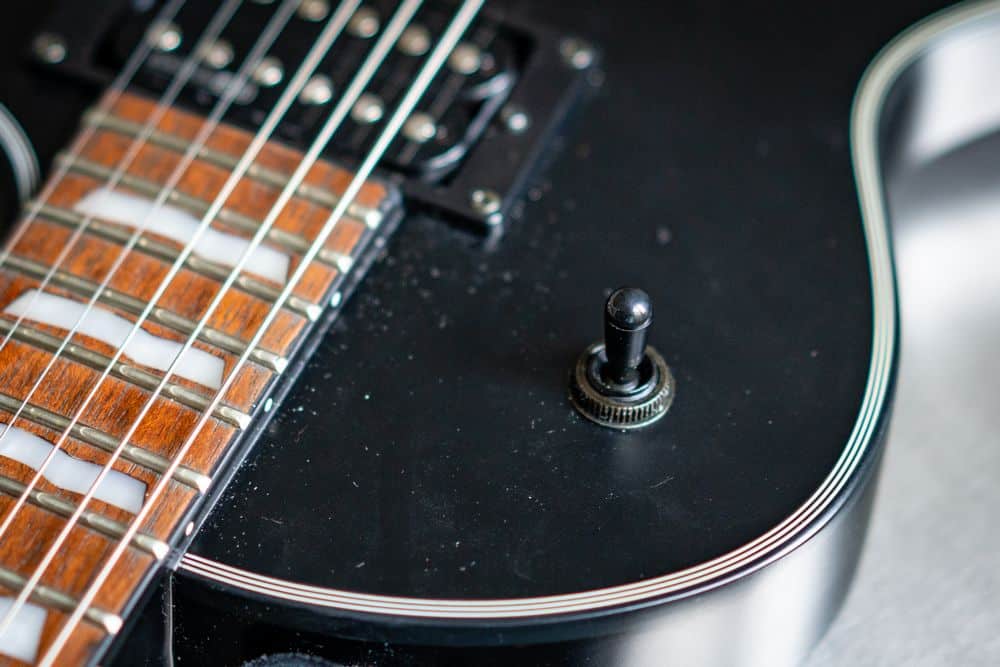 The pickup selector allows you to turn specific pickups on or off. This can change the guitar’s sound.

As the name implies, strap buttons are small buttons to which you can hook your guitar strap. According to several pro musicians, a locking type of strap button is the best. If you want to keep your strap secure while shredding up and down the guitar neck, it is advisable that you use one. A standard guitar has six strings, but there are many variations with different numbers of strings. Their diameters vary with some being very thin and others quite thick. While most classical and acoustic guitar strings are commonly made from gut or nylon, electric guitar strings, on the other hand, are made out of strong magnetic metals such as steel, chromium, or nickel. Strings need to be changed fairly often.

You cannot find string retainers on all types of guitars. They are usually found on guitars like the Fender Stratocaster, for example. String retainers have a role in preventing a string from jumping out of place. They also help preserve the string’s tension and keep the strings firmly slotted. The tuners are located on the guitar head. Their arrangement and placement are determined by the shape and size of the guitar head. Some guitars have all six tuners (on a six-string guitar) on one side, while others have three on each side.

The tuners allow you to tighten or loosen the guitar strings to achieve the right intonation. If you turn the tuner and nothing happens, read our article Guitar Tuning Peg Won’t Tighten String.

The Tremolo Bar (The Whammy Bar)

Commonly known as the whammy bar, the tremolo bar is the part of the electric guitar that you can use to modify the pitches of the strings. If you want to add vibrato to certain music passages, you can do that by changing the tension of the strings using the whammy bar. In fact, this is the reason why the tremolo bar is also called the vibrato bar.

A truss adjustment or rod can be located in different areas depending on the style and brand of the electric guitar. It can either be on the heel of the neck, behind the nut, at the base of the neck, or inside the guitar body (which is accessible through the soundhole or the headstock).

The truss works primarily to counteract the tension of the strings. It allows you to adjust how much (or how little) the neck bows when playing. These electric guitar controls do exactly what the names indicate. The volume control helps reduce or increase the volume. The tone control enables you to change the guitar tone, by modifying the amount of treble.

Knowing the different parts of the guitar and how they work together to create that beautiful sound (maybe not yet, but it will be beautiful once you get good at playing) is important. Not only does it help you understand what a guitar teacher is talking about, but it also helps you understand your instrument. And the more you understand it, the better you can make it sound.