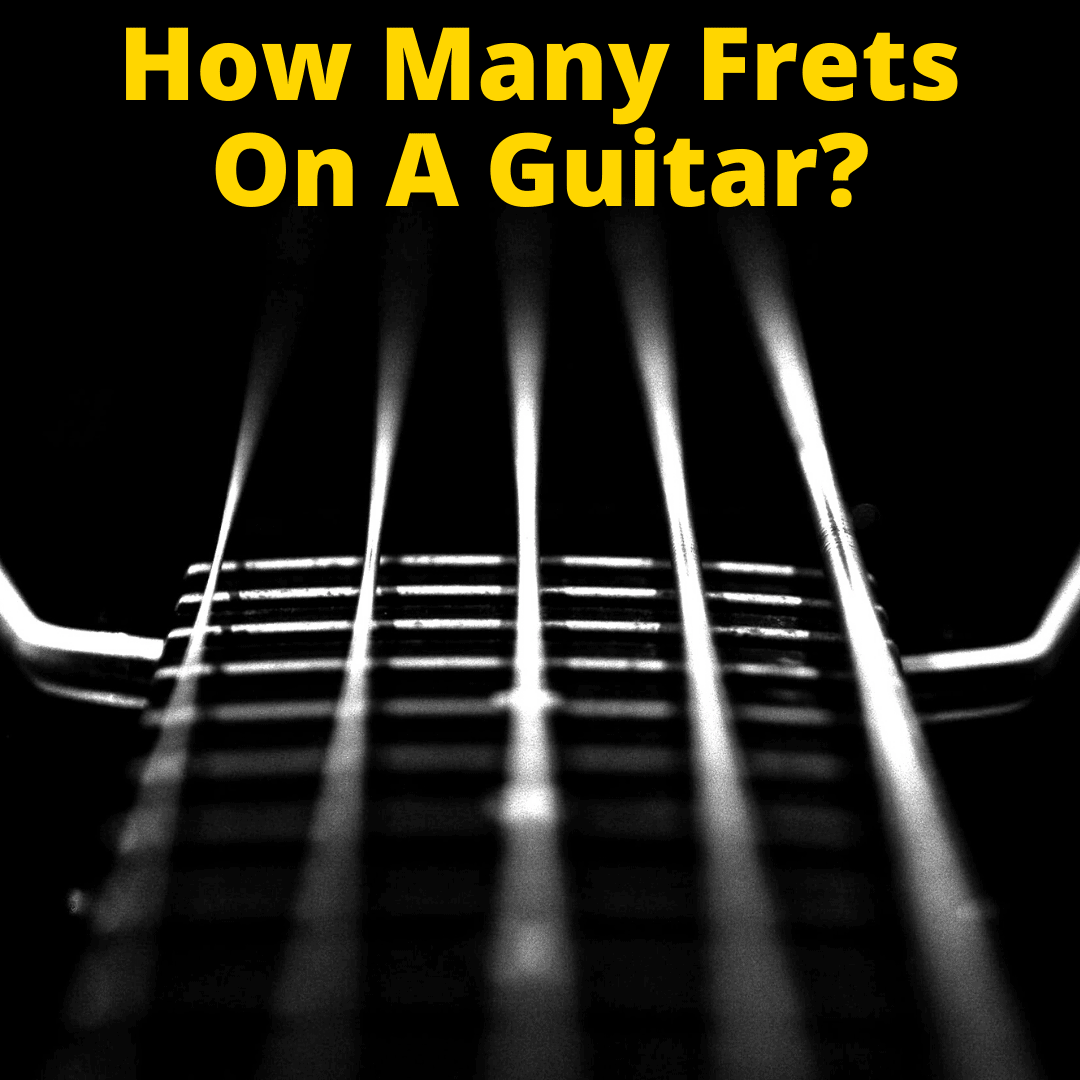 The guitar is a fretted instrument.

You can see that immediately. It has raised metal strips along the fretboard.

But if you look at most other stringed instruments, like the violin, viola, cello, double bass, etc., they do not have these frets.

Why do only guitars (and a few other instruments) have them?

What is their purpose and how do they affect playability?

And how many frets are there on a guitar anyway?

We’ll cover all of these questions and more, starting with the one that probably brought you here.

How Many Frets On A Guitar?

The number of frets differs, depending on the type of guitar. Classical guitars generally have 19 frets, while electric guitars usually have 22 or 24, with 22 being the most common number.

We’ll go into more detail on this below. First, let’s find out exactly what frets are and what purpose they serve.

What Are Frets And Why Do We Need Them? 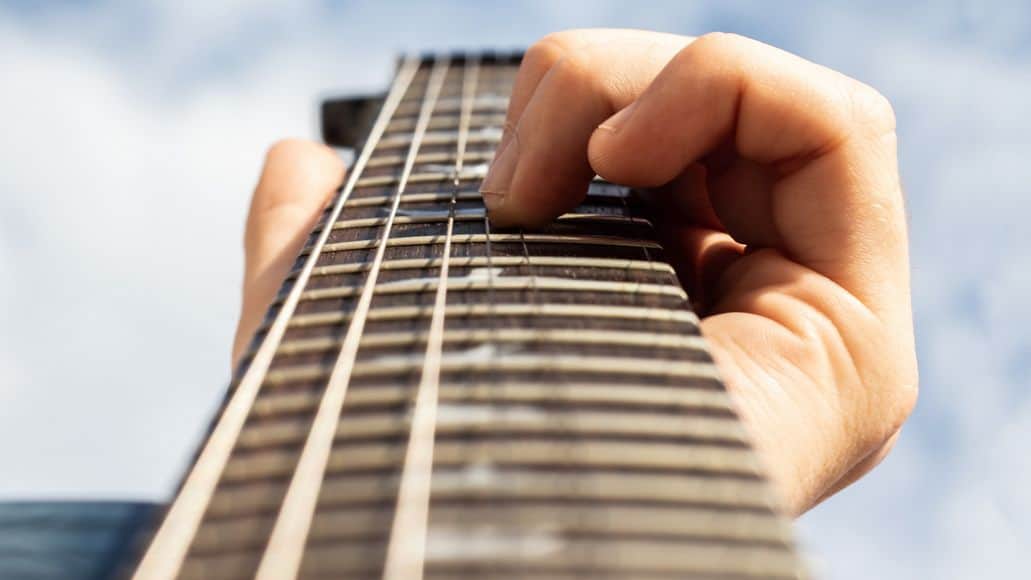 Simply put, these markers divide the fretboard into intervals to help us know where the notes are. In fact, frets are essential, given the fact that chords are important to guitar playing. Without frets, it would be much harder to play chords, because you would need to know the exact location of each of the notes on the fingerboard!

Number Of Frets On A Guitar

Many different types of guitars exist, but there are three main ones: acoustic, bass, and electric. The number of frets differs depending on the type of guitar.

Typically, there are nineteen (19) frets on classical guitars, following a reference system of tuning called the ‘equal temperament octave,’ also known as a Fret Rule for Guitars. This refers to the mathematical formula or technique that guitar makers use to calculate the placement of the frets in relation to semitones. 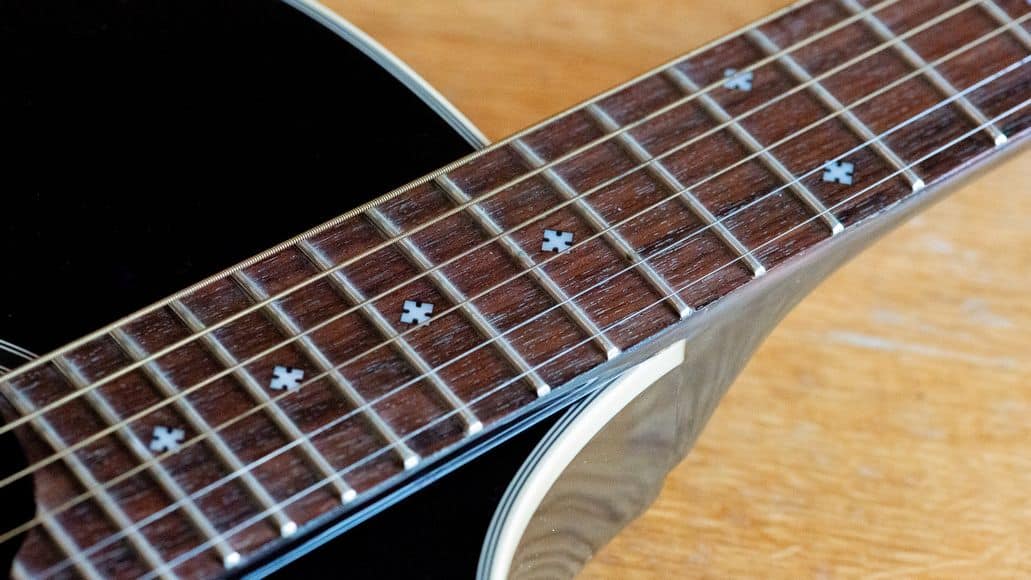 It might sound not very clear at first, especially if you are new to musical terms and theory. For now, all you need to know is that the fret rule results in the frets being placed a semitone apart.

Number Of Frets On Electric Guitars

Electric guitars usually have more frets than classical guitars. Most modern electric guitar models, including baritone guitars, have twenty-two (22) frets, while others have twenty-four (24).

Rather than having less than twenty frets, electric guitars started to have more due to the revolutionization of new music in the 1930s, such as rock and metal.

Let’s say you want to play songs in the metal genre. To play them easily, you might want to have 24 frets to play more notes on the guitar without moving down a string. In short, with the 23rd and 24th fret, you’ll have better access for the hand to reach those notes. And if you want to play some of these most difficult guitar solos, you won’t be able to do so without the 23rd and 24th frets.

Does The Number Of Frets On A Guitar Matter? 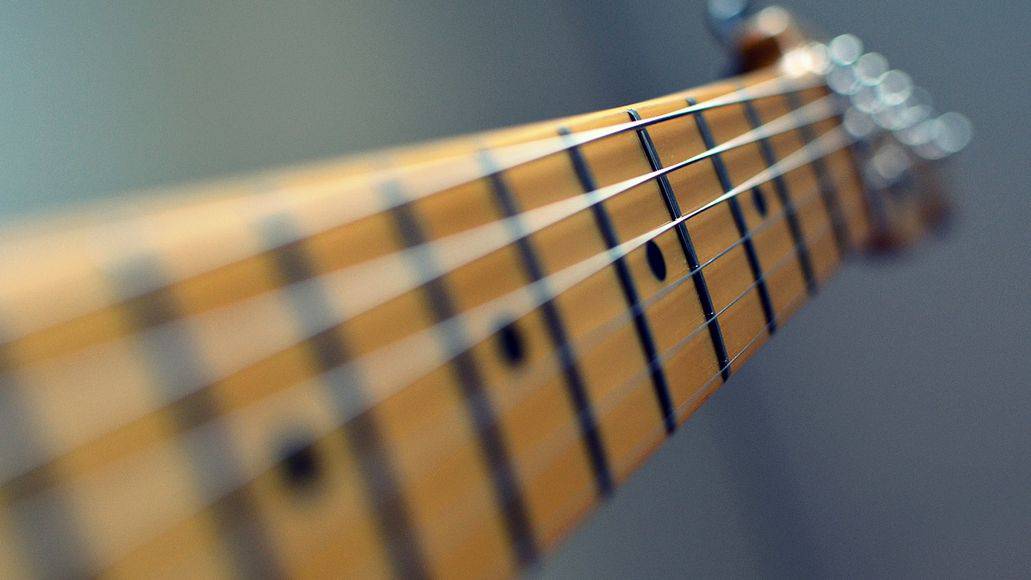 Mathematically, the difference between 19 frets and 24 frets might only be five, but depending on your goal in playing and the target music genre, the number of frets on a guitar matter much more than the number 5 would indicate.

Here’s what you need to know about 24 fret guitars, like the Sterling Majesty MAJ100, and those with lesser number of frets.

This might really be a minor issue for some guitarists, but other musicians love seeing extra frets on the guitar. It can provide a sense of completion to have two full octaves on a guitar. Those who love collecting guitars, will almost certainly want to have at least one guitar with the extra frets, right?

Having additional frets on the guitar means that you will have extra high playable tones. Think of it like this. On the high E string of your 24-fret guitar (assuming it is on standard tuning), you have two more halftones than on a 22-fret guitar, giving you two full octaves.

The 24th fret allows you to play a higher E note. Is that vital?

Yes, for certain songs. For example, you want to play Master of Puppets by Metallica; with a 22 fret guitar, it is impossible (if you’re shredding) because Kirk uses both the 23rd and 24th fret of the higher E string.

However, this extra fret principle doesn’t apply to other lower strings. You are getting one extra full tone on each of the other strings, but it doesn’t really matter, because you can also play those notes on a guitar with 22 frets.

They might not be as easy to play, but they are still the same notes. 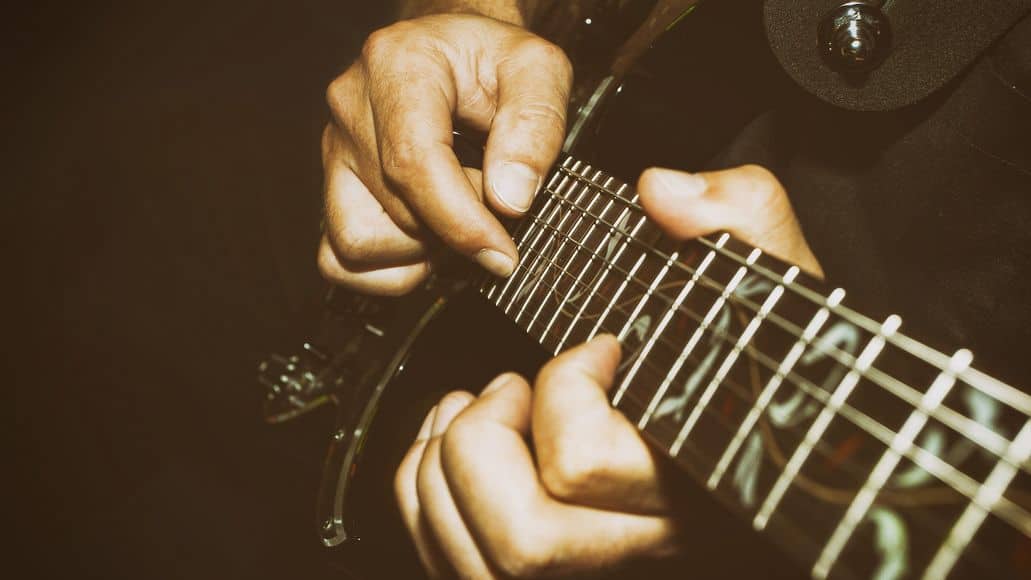 Playing the guitar requires dexterity and marvelous feats of physical agility, if you want to play all possible notes and chords. There are some instances when you need to switch from playing one string to another to play certain songs.

More frets allows you to play more notes, without using the higher strings. If the notes and chords you need are on the additional 23rd and 24th frets, it makes it much easier than having to move strings.

For example, one way to play middle C on the guitar is on the 20th fret of the 6th string. Sure, this location is rarely used, but if you have a 19 fret acoustic guitar, you don’t even have the option.

However, electrical guitar construction with extra frets has disadvantages too, and the biggest has to do with the pickups. It can also be tough to reach these additional frets on some guitars, unless you have one with a double-cutaway body shape or with a customized flat neck heel.

The Position Of The Neck Pickup Changes

We previously mentioned the neck pickup as a disadvantage of having extra frets. To some, it is the most concerning difference since it can have a considerable effect on the sound. How?

While the scale length stays the same, when you add more frets, the neck gets longer. This mean the neck pickup gets pushed back a bit more towards the bridge. Going from 22 to 24 frets adds 19.84 mm (or 0.781 inches) to the neck on a 25.5 inch scale.

Why does this matter?

Because moving the pickup changes the tone quality.

Guitar strings vibrate the most and produce the biggest sound right in the middle, which is the 12th fret on open strings. The closer a pickup is located to that midpoint, the bigger, fuller, and thicker the tones it produces.

If you have the same pickup in the neck position and the bridge position, you’ll probably have noticed that the bridge pickup always sounds brighter and thinner. This is why. It is located further from the midpoint.

What this means is that moving the neck pickup closer to the bridge, and thus further from the midpoint, means it will produce a thinner sound.

How Far Apart Are The Frets On A Guitar? You may have noticed that as you get closer to the body of the guitar, the distance between the frets becomes proportionately smaller. Luthiers (stringed-instrument makers), follows a principle to create musical notes in octaves and fifths.

Currently, there are several scale lengths due to the differences between guitar style and type. For years, the nut (front edge) distance to the first fret was 18, but now various guitar makers follow different calculation rules/formulas.

Since different brands and models vary in terms of the guitar scale length, the fret spacing also differs. To calculate fret spacing, you can use an online digital fret calculator or check different guitar brands or models.

Do You Really Need 24 Frets?

Do you really need a lot of frets on your guitar? Is it going to be a big issue if your guitar has less than 24 frets?

Generally, not really. Not a lot of songs require the use of the 23rd and 24th fret. If you don’t play hardcore metal or rock n roll, you’ll probably never even need to play the notes past the 20th fret.

The necessity of having more than 20 frets depends on the genre of music you will be playing. At the end of the day, having fewer or more frets on a guitar is primarily a matter of personal preference. Any of these easy metal riffs can easily be played on a guitar with 22 frets, for example.

What Are The Dots On A Guitar Fretboard For? 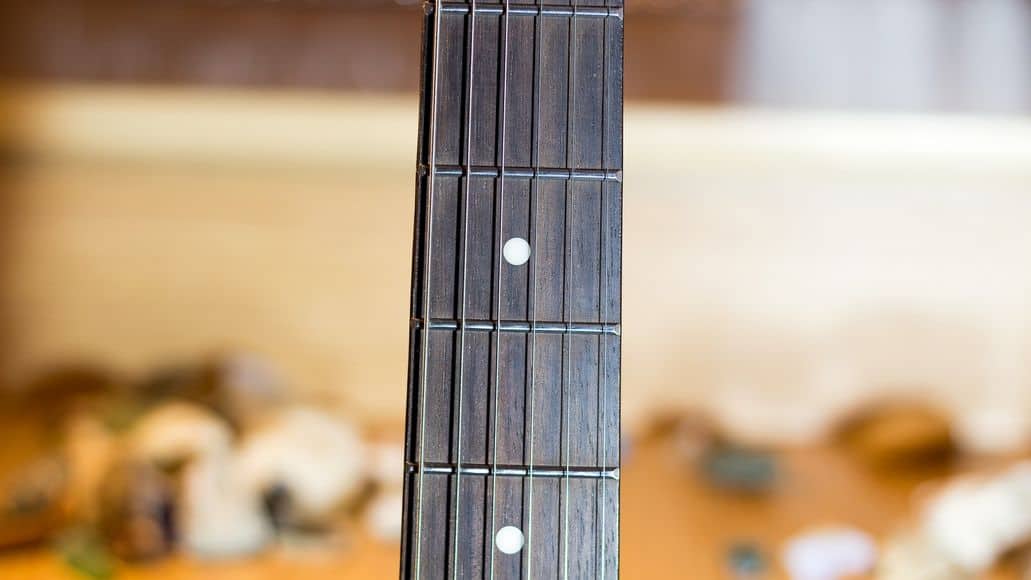 Now that you know a little more about frets, you are probably wondering what the purpose is of the dots in between the frets on the guitar fretboard.

These dots (sometimes called inlays) attached or drawn on the face of the guitar fretboard are indicators. Most guitars have these indicators, but some may not. Like frets, the dots aid guitarists in jumping from one position to a different part of the fingerboard more quickly, and with accuracy and ease.

As you play chords, notes, or scales on the guitar, you can use the dots to help you quickly identify each fret’s location even without looking at the guitar neck or fingerboard.

For instance, if you are jamming with friends and need to jump to the 7th fret, you can look for the 3rd inlay or dots on the 7th fret. In other words, these dots can serve as visual references, making a fret jump a bit easier and faster.

Most guitars have frets, because they make it much easier to accurately play chords. Without frets, it would be difficult to properly place each finger, but with the frets, you only have to place them behind the fret, so that the string makes contact with it.

The actual number of frets does differ, but it is generally 22 on a good electric guitar and 19 on a classical guitar, both of which are enough for most people. If you want to shred, you’ll probably want a guitar with 24 frets, like many of the top metal guitars.