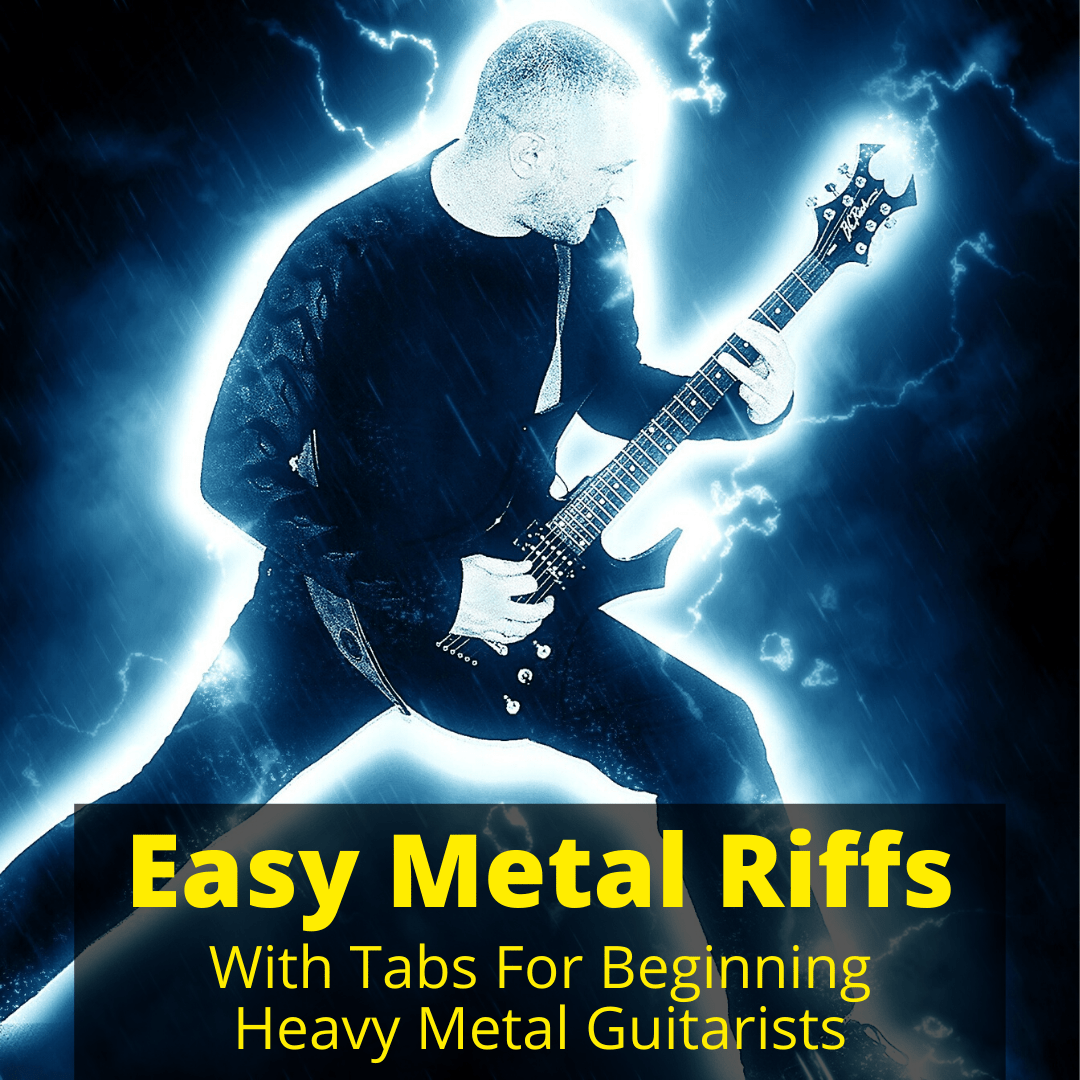 So you got yourself a new heavy metal guitar and you want to start playing some of your favorite riffs.

But a lot of them are just too complicated when you’re just starting out.

That doesn’t mean you can’t play anything, though.

Some of the greatest heavy metal and hard rock riffs of all time are actually quite easy to learn to play.

The following easy metal riffs are all famous, they sound great, and any beginner can pick them up with a little bit of practice.

We’ve included guitar tabs for each riff, so you can get to work on learning them immediately. Let’s get started!

Go through the list and find your favorite riff. Then study the tabs and start practicing. Before you know it, you’ll be ready to wow your friends with some of the most famous metal riffs of all time.

Smoke On The Water by Deep Purple

Of course, Deep Purple’s Smoke on the Water is usually the first riff every rock or medal-loving guitar player learns. The song comes from the band’s legendary album Machine Head and tells the story of an incident and a huge fire that happened back in 1971 in Montreux, Switzerland while the band was in the process of recording their album in Rolling Stone’ Mobile Studio.

The riff, written by guitar legend Ritchie Blackmore, is written in G minor blues scale. Instead of using standard power chords, Blackmore added a lower fourth below the basic note. It’s played on the third and fourth string and is quite easy to perform, both technically and rhythmically.

Another guitar champion of the era who is also responsible for the development of heavy metal music is Jimmy Page of Led Zeppelin. Released in 1969 on the band’s second album, Whole Lotta Love still remains one of the staples of the genre. The song’s guitar riff goes through the entire song and pretty much defines it.

Although fairly simple, there are a few important things that a beginning guitarist can learn from this simple riff written in E minor. Most notably, you’ll get the chance to practice playing proper rhythm and how to implement palm muting.

Who better to be featured on this list than Tony Iommi? Iommi is often credited with inventing heavy metal and he changed music history with his immensely heavy riff for Iron Man from the 1970’s Paranoid album. To this day, the song is considered one of the pivotal moments in the history of metal music.

The Iron Man riff is fairly simple. However, there’s one thing that even more experienced musicians don’t know. Although it starts with a B power cord, the riff is actually written in the key of E minor. There are a few ways you can play this riff, but Iommi always preferred to play it on 5th and 6th string.

And the title track of Sabbath’s 1970 album Paranoid is another example of how innovative Tony Iommi was for his time. This simple song with a simple riff was written just to fill up time on the record. However, the song ended up being their biggest hit and a song that they played at the end of almost every one of their live setlists.

Also written in E minor, the riff essentially consists of a three chord progression. While there are two main ways to play it, Iommi preferred to play it on 5th and 6th string, starting on the 12th fret.

He used the palm muting technique throughout the entire riff, except for the last cord. With this riff, a beginner can not only learn how to implement this technique but also get acquainted with dynamics and holding down a steady rhythm.

While we still hear the classic metal style, Ozzy Osbourne’s solo material turned out to be a little different than his work in Black Sabbath. With a great musician like Randy Rhoads doing all the guitar duties and a huge portion of the songwriting, the resulting material pretty much changed the game for metal music.

Crazy Train is still one of the musician’s biggest songs. Its intro features a riff that’s played note by note in F minor on the 5th and 6th strings. While you can play everything “evenly” without using any additional techniques and tricks, most of the notes are played with palm muting with only some of them left to ring out.

Breaking The Law by Judas Priest

Judas Priest pretty much changed the game in hard rock and heavy metal music. This is especially the case with their 1980 album British Steel. On it, we have Breaking the Law – a song with a very simple riff and a very simple structure. But despite its straightforward nature, this is still one of the most important genre classics.

This is another example of a riff that’s played note by note instead of using power cords. It’s written in A minor and it starts with an open 5th string. Just like Ozzy’s Crazy Train, this is one of the easiest examples to get familiar with minor scales and how they work.

While it’s not always easy to say whether AC/DC is heavy metal or hard rock, their songs have made a huge contribution to the development of the genre. Their entire catalog was done using a very simple yet effective formula that worked for them for many decades. And this is exactly what we hear in their legendary song T.N.T. from 1975.

Although their songs seem simple, most of the riffs are a bit tricky due to syncopation that makes for that “bouncy” groovy feel. This is also the case with T.N.T. which has just a little bit of that old school rock ‘n’ roll feel to it. A good amp for metal will help you achieve this sound with ease.

For Whom The Bell Tolls by Metallica

Just a straight-up mid-1980s metal song, For Whom the Bell Tolls is one of Metallica’s most popular pieces of all time. And its strength lies in its simplicity, with entire stadiums chanting along to all the riffs and vocal melodies.

While we’re at it, the song is filled with some really simple riffs, which makes it very popular among beginners. With a little practice, you can sound like Metallica.

The intro, right after the sounds of bells ringing out, is just simple F# and open E power chords. After that, we have a few riffs throughout the song that are also very beginner-friendly. There will never be a musician like Ronnie James Dio. Even to this day, the power of his voice is unmatched. A perfect example is his big hit song Holy Diver. Complementing his flawless singing, we have simple yet amazing guitar riffs. The song’s main riff is a must for every lover of rock and metal music, no matter the playing skill level.

Holy Diver is written in the key of C minor and consists mostly of power cords. Along with power cords, we also have a few spots where the C note, played on the 3rd fret on the 5th string, is palm-muted. This is another great riff that will get you familiar with the minor scale, palm muting technique, and dynamics. While it’s not a pop song, we can easily say that Rock You Like a Hurricane by Scorpions is as catchy as any mainstream tune these days. Released back in 1984, it’s the band’s signature song and just a straight-up heavy metal piece.

Compared to most of the other metal riffs, this one essentially serves as a chord progression. These are all power chords, but they serve the purpose of a regular chord progression that goes: E, G, A, C, and D. What’s really great about this song is that it really feels gratifying when you learn its main riff.

Symphony Of Destruction by Megadeth

One of the “Big Four” bands of thrash metal (along with Slayer, Metallica, and Anthrax), Megadeth defined the elements of modern metal music. With Dave Mustaine as the leading musician , the band had some pretty innovative songs, including Symphony of Destruction from their 1992 album Countdown to Extinction.

Since the 20th century was nearing its end, the piece reflects on the impact of global politics on both the masses and the individual. This is all accompanied by a very simple and sinister-sounding riff.

We have F and E power cords, along with a brief passage of palm-muted F and G notes played on the 6th string. The reason why this riff sounds so dark is due to a half-step distance between the first two power chords. Along with the G note, we could say that it fits Phrygian mode, which is known for its somewhat tense feel.

From their beginnings to their end, Slayer has always been a band that makes no compromises. They’re just a straight-up thrash metal band with some of the most evil-sounding riffs known to man (though we did include Kerry King on our overrated guitarists list). This is exactly what we can hear with the main riff of their legendary hit Raining Blood.

As you might suspect, the riff sounds as evil as its name might suggest. And this is exactly where all boundaries will be broken. If you know at least a little bit about music theory, you’ll definitely get confused over the riff’s structure since it doesn’t really fit into any scale you know. It’s just one evil-sounding chromatic mess that works perfectly in the ears of true metal fans.

What did you think of those riffs? Have you learned any (or all) of them yet? If you’re starting completely from scratch, I imagine they might seem a bit daunting (especially if you can’t read guitar tabs) and take a fairly long time to learn. If you have a little bit of experience, you were probably able to pick them up pretty easily. Once you’ve got them all down, try your hand at these easy guitar solos.