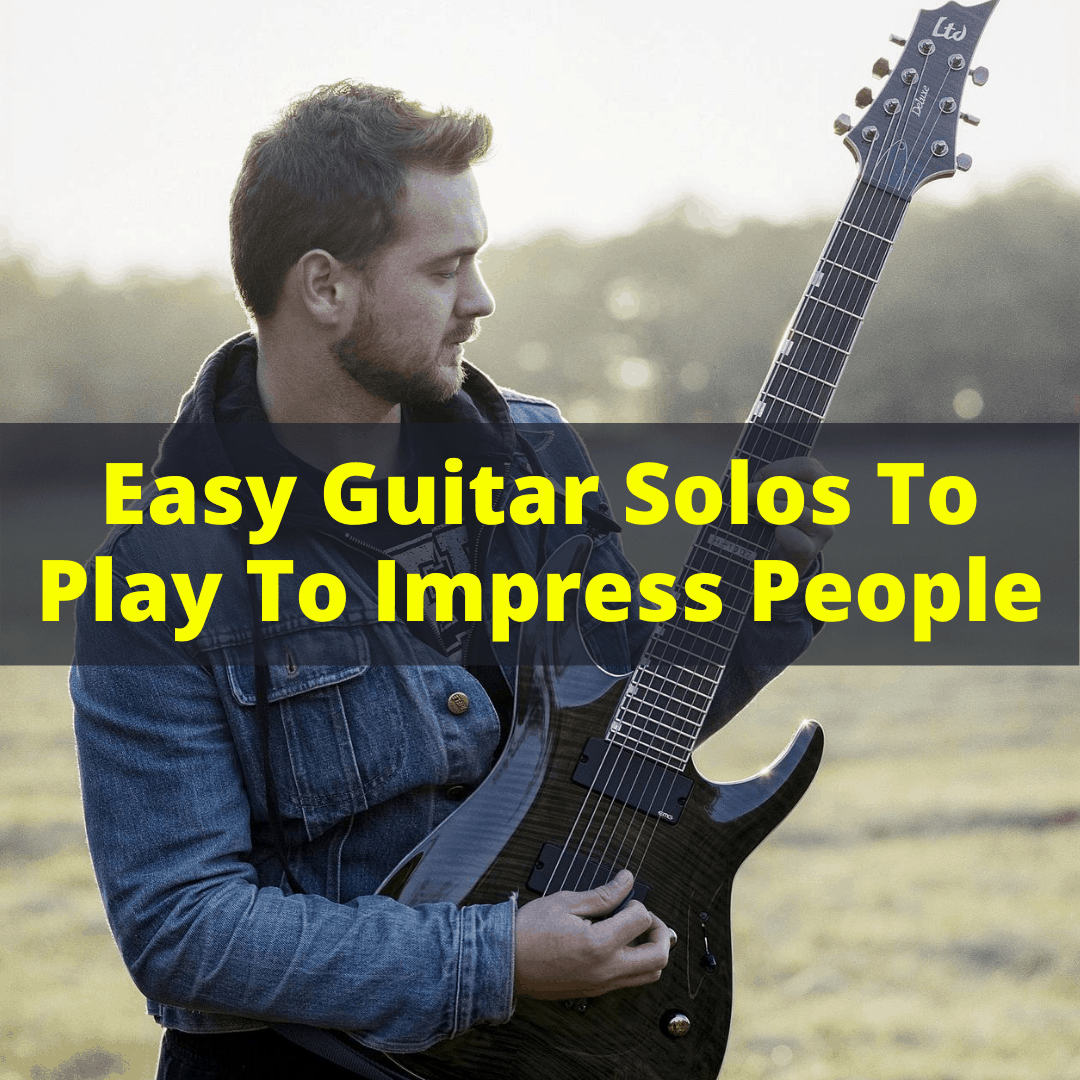 Want to impress people with your guitar skills?

Few things do that better than a guitar solo.

Of course, the reason they’re impressive is that they’re more difficult to play.

Luckily, there are some easy guitar solos that even beginners can learn, but that still sound impressive to listeners.

The following guitar solos sound great and are instantly recognizable, so people will definitely be impressed when you break one out. Best of all, every one of these solos is easy to learn!

Give each of these solos a listen (you’ve probably heard them before anyway) and choose your favorite. Then check out the guitar tabs and start learning. They’re all pretty easy, so it shouldn’t take long before you’re ready to wow people with your new skills.

Nirvana changed the game. They brought grunge into the limelight. And the song that thrust them so quickly there is the extremely popular Smells Like Teen Spirit, known just as well known today as it was when it came out.

Released in 1991, this talisman of the genre features hardly-understandable lyrical angst, pounding drums, and most iconic of all, guitar riffs and licks that hook you in an instant.

One of those is the droning, almost whiny guitar solo. And while those aren’t the best words to describe a piece of music, that’s kind of what it sounds like. But that’s not a bad thing.

It’s the guitar tone and slight bends that Cobain employed in this recording that make it seem whiny. But they’re also what make the solo a standout, and one that will surely garner you some praise when you cover it.

Follow this link to a list of tabs for you to learn the song, and the solo. This link has the lyrics and their meaning.

A major driving force behind the success that the Red Hot Chili Peppers have enjoyed, and their oh-so unique sound, is their stalwart guitarist, John Fruisciente. That’s quite obvious when you look at their run in the 90s.

They hit it big with their 1991 album Blood Sugar Sex Magik, then struggled throughout the rest of the 90s, until they released Californication in 1999. Not-so-coincidentally, Fruisciente left the band after Blood Money Sex Magik, and rejoined to write Californatication.

And it’s a good thing too, otherwise the world wouldn’t have the title track from the album Californication. We also wouldn’t have the really simple, but effective, solo that Fruiscente so effortlessly plays on the track.

What’s so great about this solo is that it is incredibly simple, but it carries the same vibe and energy as the rest of the song. Sure, there are a few bends and hammer-ons and pull offs, but they’re nothing that a novice guitar player can’t get right after a few practices.

And the best part is, you don’t have to lug around a great big amp or have distortion pedals to play the solo. It’s played clean, without any overdrive, so you can play it whenever you have a guitar in hand. Once you learn it, of course. To help you with that, you can find the guitar tabs here.

I bet before you clicked the play button, that iconic riff started playing in your head, right? And it’s no surprise – it’s one of the most recognizable pieces of music in modern history.

The riff came about when Jack White, multi-instrumentalist and vocalist for The White Stripes, was warming up. He’s quoted as saying: “I played the riff again and it sounded interesting… I thought if I ever got asked to write the next James Bond theme, that would be the riff for it.” And while he never got to feature the riff on a 007 OST, he did turn it into a massive hit.

White uses an octave pedal to get the main riff to sound as low as a bass, which actually makes it a great riff to play on your favorite baritone guitar, if you have one. The solo is basically the same riff, but a few octaves higher

You could also just play the main riff on a bass. Even though White played it on guitar, it works better on the bass, which is why it made our list of beginner bass songs that are easy to learn.

The rhythm is, for the most part, the same, too, which means that if you learn the main riff, you can very easily learn the solo. And don’t forgot the distortion – that ripping tone is half the reason to solo is so cool, and fun, to play.

We Will Rock You by Queen

This is a track that has stood the test of time, and will continue to do so. It’s anthemic. And that was planned.

In an interview with Mojo magazine in 2008, Queen guitarist Brian May says that he wanted to write something that the crowd could get involved in too. A revelation came to him in a dream.

And even though there’s no guitar until quite late in the song, the guitar plays an important role. It’s huge when it comes in, amping the song up and helping it reach that next level of rock ‘n’ roll gravitas.

And when it comes in, it goes straight into the solo too, making it stand out even more. What a way to impress your crowd if your only contribution to a song is to tear through a solo that’s as much a stalwart as the singalong lyrics!

The solo is quite repetitive, which will help you in your quest to learn it. And speaking of, here is a list of tabs to the song so you can get straight to it.

Zombie by The Cranberries

In 1993, The Cranberries released a track that was very different from to the sound that had carried them to the top. They were known more as a band to lay down limericks and ballads, so the anti-war Zombie was quite a departure from that.

Singer Dolores O’Riordan is even quoted as saying, “That was the most aggressive song we’d written. Zombie was quite different to what we’d done before.”

Inspired by atrocious bombings in the band’s home country of Ireland, O’Riordan originally wrote the song on an acoustic guitar. At rehearsal, she plugged in and asked drummer Fergal Lawler to hit the drums hard and this almost grungy classic was born.

The solo really adds to the feel of the song. It is powered by distortion and almost dissonant notation, creating an angsty, aggressive sound that really carries through well. And even though it is so emotive and does so much for the song, it’s not hard to play, and is surely one to impress anyone who is a fan of the more rock ‘n roll side of the Cranberries.

Here is a list of tabs to the track.

Def Leppard were pioneers of 80s glam-rock and they inspired many subsequent hair-metal bands. And just like many of the bands they’ve inspired, Def Leppard were no strangers to the lewder side of life, and this is ever so true on their 1987 single Animal.

Interestingly, the song was not recorded until two years after it was originally written. And it was the vocal line that started the whole process off, with the guitar parts written afterwards.

Something that Def Leppard did really well, was create music to perfectly back their purple lyricism. After all, it’s the music that gets you moving.

And this is translated into the Animal solo. It’s really simple, but so perfectly placed in the song. And it’s not difficult to learn at all, either. Just make sure to throw a lot of distortion, delay, and reverb on, break out your heavy metal guitar, and you’ll be living the 80s lead guitarist dream. Here is a list of tabs to get you starting.

Released as a single from their extremely successful American Idiot concept album, Holiday is a modern punk classic. The album tells the story of a group of young characters, who are led by one Jesus of Suburbia. But the record is really dripping in subtext.

In singer and guitarist Billie Joe Armstrong’s own words, “I am anti-war, so a lot of [the album] has to do with that, and there’re different sides of it too. Like, there’s one line that sort of messes with liberals a little too, where it says, ‘Hear the drum pounding out of time/ Another protester has crossed the line/ To find the money’s on the other side… [Holiday] is about this mishmash of people with all these strong opinions who really can’t agree, and leaving [decisions] to the person who’s sort of standing in the middle confused and overwhelmed.”

And while the album, and this song, are complicated, the solo isn’t. And if you play it to anyone who listened to American Idiot in their angst-filled teen years, you’ll surely be greeted with many nostalgic cheers. Here is a list of tabs so you can learn this track.

Kryptonite by 3 Doors Down

Arguable the most famous of the songs in 3 Doors Down’s repertoire, Kryptonite was an instant hit when it was released in 2000. In fact, it did so well that it won the Billboard Music Award for Top Rock Song that year.

Lead vocalist Brad Arnold wrote the song a few years earlier, in his high school math class. As the drummer for the band in those very early years (around 1992), he wrote the skippy drum beat on his desk while not really paying attention to the class.

The solo is quite easy, but what’s cool about it is that it’s played on the lower end, whereas most solos are played on the higher frets. It’s a really fun solo to play and one that will surely impress your audience. Here are the tabs you need to learn the song. And no need to put a capo on your electric guitar.

What’s cool about these guitar solos is that they are all instantly recognizable, while also being easy to play. That means your audience will get into the song right away, because each one of these tunes is genuinely popular.

Sure there are always some people who hate any song, but the tracks listed here are all by artists whom most people hold in extremely high regard. And if you nail one of their solos, even if it is an easy one, they’ll quickly hold you in high regard, too. It’s always more fun to tackle a challenge that is achievable, as opposed to the hardest guitar solos out there, so what are you waiting for?