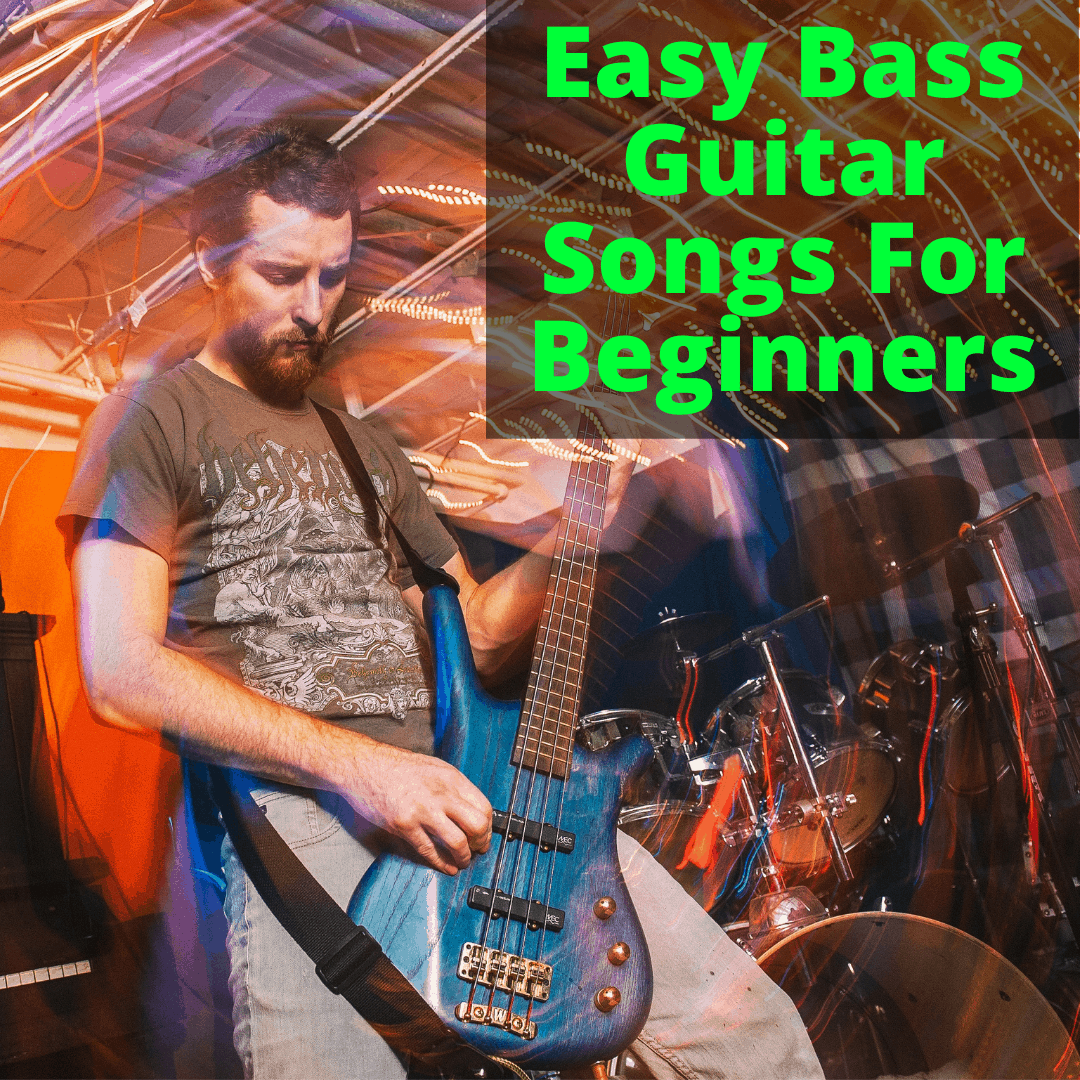 So you got a brand-new bass guitar.

Now what do you play?

You need some easy bass guitar songs for beginners.

Tunes that are simple enough that you can pick them up with practice. And fun enough to motivate you to keep practicing.

Ideally, they should also challenge you to improve your skills and teach you fundamental techniques.

Sounds like a lot to ask from a simple song. But there are plenty of great tunes that do all of that!

We included tunes from a variety of genres and styles. Hopefully there is at least one song that appeals to you. All show that the electric guitar vs bass argument does not automatically go to the guitar.

They’re all great great songs with catchy bass riffs, so they’re a lot of fun to learn, even if they’re not your preferred genre.

Queen – Another One Bites the Dust

Queen’s John Deacon was a master of coming up with simple but very catchy and groovy bass lines. One of his masterpieces is Another One Bites the Dust, from the band’s 1980 album The Game.

This song features an easily recognizable bass riff, played in a 4/4 time signature. But your timing and groove need to be perfect in order for it to sound good.

This song is a perfect practice example for those who are just starting out. Another great thing about Another One Bites the Dust is that you’ll be able to practice dynamics and coordination of your picking hand, ultimately preparing you for some more complex bass lines.

Although he was a pop superstar, Michael Jackson has always been respected by musicians of all genres, even metal music.

And let’s not forget how he always had great musicians in his band, both for live shows and studio sessions. One of his songs that’s really popular among bassists is Billie Jean from the legendary Thriller album.

The main bass riff is played in the pentatonic minor scale and consists of eighth notes played in a steady tempo. The entire song has a handful of different bass lines and a very simple structure.

Now, here’s an interesting one. Although fairly simple, Money by Pink Floyd can teach you a lot of things. First off, the main riff is written in a 7/4 time signature, which will help you learn more about odd meters.

It’s really important to perform it the right way so that it seems like it flows, as if it was written in a 4/4 time signature. This is achieved by performing with that slightly bouncy groove and using the exact note lengths.

So in this case, the main riff from Money will be a great practice for using stops and note lengths the proper way. Additionally, the song has a few other bass lines that aren’t that difficult to perform. If you’re a Pink Floyd fan, check out some of these bands that sound like Pink Floyd.

Ben E. King’s legendary hit song Stand By Me can help you learn these same things, all while playing in a 4/4 time signature. At the same time, the bass line complements the main chord progression and the vocal melody with its syncopated rhythms.

While it might seem simple at first, it’s just hard enough for beginning bassists to start scratching their heads. But it’s not impossible to learn at this level. It’s also one of the most important songs to learn if you plan on building your repertoire.

Just when everyone thought that rock music won’t ever have another big hit, out came Jack White with his Seven Nation Army.

While it seems like there’s a bass guitar in there, this was actually White playing his guitar through a DigiTech Whammy pedal, shifting its pitch exactly one octave lower.

Nonetheless, Seven Nation Army has become a go-to song for beginners due to this simple riff that repeats all throughout its length. There aren’t any particularly tricky parts about it, despite the riff being incredibly catchy.

The Clash – Should I Stay or Should I Go

Although often associated with punk music, The Clash is one of the most interesting bands of the late 1970s and the first half of the 1980s.

Mingling with the new wave movement, The Clash wrote Should I Stay or Should I Go which helped them make a breakthrough among rock bands of the era.

Sure, it took about a decade for the song to really blow up, but it was a simple and revolutionary tune for its era. This makes it a perfect addition to any beginners repertoire.

No one combined hip-hop and alternative rock music like the Gorilaz did back in the 2000s.

One of their biggest songs, Feel Good Inc., not only does this well, but also features a fairly simple structure, bass lines, and chord progressions, making it a great choice for everyone who’s just getting into bass or guitar.

Today, the song is a classic, retaining its popularity among fans of all genres. We strongly encourage you to make it a part of your repertoire.

The grunge movement brought a lot of changes to rock music back in the early 1990s, many of which are felt even to this day.

Kurt Cobain is easily the subgenre’s most prominent musician, leading his band Nirvana to superstardom. Many bands similar to Nirvana followed, but Nirvana remains the most prominent.

Nirvana’s biggest hit was Smells Like Teen Spirit, which is a big starting point for both bassists and guitar players. It features a simple chord progression and a rather straightforward rhythm.

The music is certainly more straightforward than the lyrics. Few even understand them, let alone get the meaning. If you’re curious, check out our breakdown of the Smells Like Teen Spirit lyrics and their meaning.

Although not exactly the band to start with as a complete beginner, the Red Hot Chili Peppers‘ Otherside is a great way for bassists to improve their skills and go into the intermediate level of playing.

Sure, it might take longer to have it sound exactly the same as it does when Flea plays it, but it’s definitely a song to check out. Additionally, you’ll slowly get into some syncopated and slightly funky grooves.

If you’re wondering how Flea gets the sound he does, he is one of the bassists included in our rundown of bass guitar rigs of the pros.

Cream – Sunshine of Your Love

Now we’re going all the way back to the 1960s and the legendary power trio Cream, featuring Eric Clapton, Jack Bruce, and Ginger Baker. Sunshine of Your Love is the link between blues and hard rock, with the song’s main riff serving as an inspiration to the coming generation of early metal musicians.

The main riff in this song is doubled by Bruce’s bass playing, giving it a slightly heavier feel than other music of the era. The entire song is pretty straightforward, including all the bass parts, which makes it one of the genre classics.

The Beatles – Come Together

The Beatles might seem simple to some, but their songwriting and arrangements were game-changing. Come Together is pretty bass-centric, something that you don’t find that often in rock and pop music.

At the same time, it’s a pretty simple and rewarding tune to learn, especially if you’re a beginner. Paul McCartney’s style of writing bass lines complemented the guitar parts, giving The Beatles their unique sound.

The Offspring – Pretty Fly (for a White Guy)

Now we head to the late 1990s, with Offspring and their bangin’ Pretty Fly (for a White Guy) off of their Americana record.

Although some of punk’s hardcore fans might not be into this kind of style, the band really did define modern punk music, along with other 1990s giants, like Green Day, Blink 182, and Fall Out Boy.

The song is especially known for its catchy parts and is most definitely a great way for bassists to start exploring their instruments. It features a pretty simple but groovy riff written in the pentatonic minor scale. With this particular song, you might even get inspired to come up with your own riffs.

Although often wrongly referred to as Every Little Thing is Gonna Be All Right and Don’t Worry About a Thing, Bob Marley’s legendary hit is actually called Three Little Birds.

This reggae tune features a simple structure and easy guitar, bass, and drum parts. But when you combine all the parts together and put Marley’s impeccable vocals over it, you get one pretty awesome song.

Although it’s all pretty simple, Three Little Birds can teach you a lot about new styles of music. Reggae grooves and bass lines are some of the foundations of modern music styles.

Another band from the grunge movement on this list, The Smashing Pumpkins are popular among musicians of all the subgenres of rock and metal music.

Led by frontman Billy Corgan, they’ve written, recorded, and released plenty of style-defining songs, one of which is Tonight, Tonight from the 1996 album Mellon Collie and the Infinite Sadness.

For this one, you’ll have to tune your strings one semitone lower to the E-flat standard and perform it as if it was written in the key of G, while the actual key is F-sharp minor. It features a lot of simple bass lines, which work perfectly with Corgan’s vocal lines and intricate guitar chords.

When you have a list of simple but great songs for beginners, you can’t avoid mentioning Led Zeppelin and their mega-hit Whole Lotta Love.

Although the spotlight has always been on Jimmy Page, bassist John Paul Jones is one of the band’s defining members. Whole Lotta Love is a great example of this.

The way he follows the guitar parts lays the foundations for heavy metal music. What’s also great about this song is that you’ll be able to learn how to count and come in at the right part. And if you like this song, check out their entire catalog, along with these bands that sound like Led Zeppelin.

Did you find a song in the list above that you think would be fun to learn? Then break out your best small bass amp and start practicing.

We tried to include a good variety of styles, so hopefully there was something there that appeals to you. If you found them all too easy, try some of these songs with great bass riffs. They are a bit more challenging.

If there are some easy bass songs you thing we overlooked, please let us know in the comments below. If we get a few good suggestions, we’ll be happy to add them to the list!