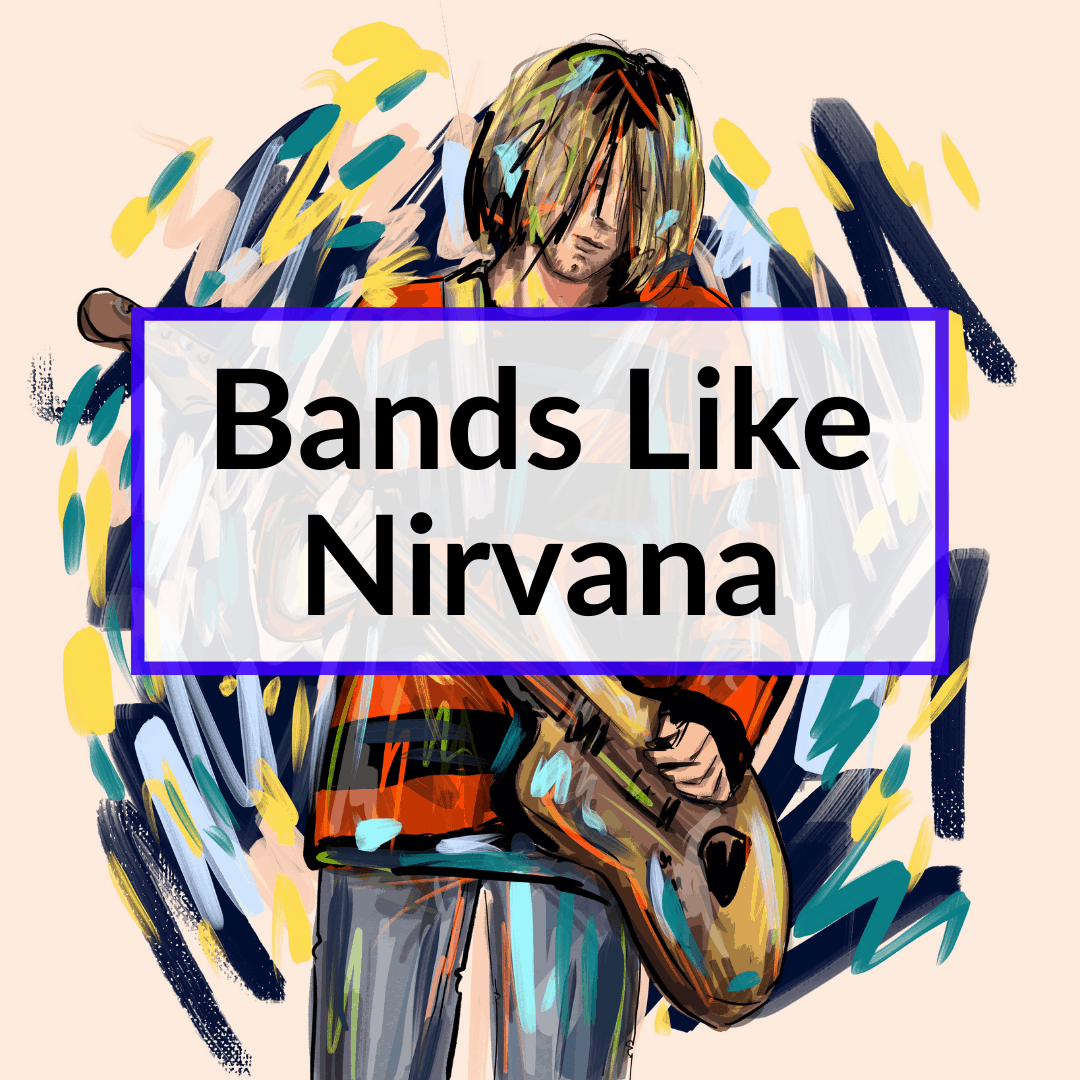 Nirvana is easily the most famous band from the grunge era.

Unfortunately, we will never get to enjoy new music from them, due to singer and guitarist Kurt Cobain’s unfortunate suicide.

But there are a number of grunge bands like Nirvana out there.

Sadly, many of them have also lost members to drugs or suicide, but they all left behind at least one album.

Let’s take a look at the best artists that are similar to Nirvana. There are sure to be at least a few you will enjoy.

Grunge was a pretty interesting movement and a somewhat unexpected turn of events in rock music. One of the most important bands from the era is Pearl Jam, who rose to fame around the same time Nirvana did.

Their music is usually a little less aggressive than what Kurt Cobain did over the years, but you can definitely notice the similarities. You can say the same thing about the lyrical themes.

The main ideas are usually the same, but Pearl Jam has often taken a different and a bit softer approach. It comes as no surprise that Nirvana’s and Pearl Jam’s fanbases overlap heavily.

While Hole was never as big as Nirvana commercially (not even close), they are still one of the most important names of the grunge movement.

They were fronted by Courtney Love (Kurt Cobain’s wife) and were formed around the same time as nirvana, so it comes as no surprise that the two bands would have a very similar musical direction.

Hole were initially active between 1989 and 2002, with Love and guitarist Eric Erlandson being the only constant members. They regrouped again in 2010 and lasted until 2012, seeing the return of Erlandson and other classic members.

Hole had only four albums, but the material is quite popular among Nirvana fans as well.

Just like Nirvana, Mudhoney is a band that came out of Seattle’s late-1980s scene. Although they were never as big as Nirvana, they have had a pretty fruitful career, releasing a total of 10 full-length studio albums between 1989 and 2018. The band is still active to this day and has kept a pretty stable lineup.

While they belong to the whole alternative rock and grunge movement, Mudhoney always kept their own unique style. There are some elements that put them close to Nirvana, but you’ll definitely be able to differentiate between the two.

The best way to start with their works would be with some of their earliest records, like the 1989 self-titled full-length debut album.

Alice in Chains are an obligatory mention on this list. While they certainly have some elements that put them in the same group of artists as Nirvana, they are well-known for their own unique style.

Most of the band’s music was written by guitarist Jerry Cantrell, while the lyrical themes and the overall mood were set by singer Layne Stayley.

Unfortunately, we lost Stayley too soon, but his lyrics and unique vocal style still inspire countless musicians worldwide. The band is active to this day, with a modified lineup.

No one can fully replace an artist like Layne Stayley, but DuVall’s contribution has been of crucial importance since his inclusion in 2006. The band’s overall style does fit some of the classic grunge boundaries, but you can also hear them exploring many other styles over the years.

Comparable to Alice in Chains, Soundgarden are another example of grunge groups that combined many different styles in their music. If you’re into Nirvana, but still like classic heavy metal in the style of the 1970s Black Sabbath, Soundgarden are a band for you.

Starting their work back in the mid-1980s, they were led by the creative duo of vocalist and guitarist Chris Cornell and lead guitarist Kim Thayil.

Their original run went until 1997. Then they took a lengthy hiatus until 2010. Unfortunately, they stopped working for good in 2017, after Cornell’s tragic passing.

What is really exciting about their music is that they found ways to implement odd time signatures and still make it sound groovy. Aside from their 1994 hit Black Hole Sun, you can check out anything from their first three albums, especially 1991’s Badmotorfinger. Outshined (video below) is a personal favorite.

Although they’re a bit different than to the rest of the bands on the list, the Pixies were a huge influence on Nirvana’s Kurt Cobain. In fact, according to Cobain himself, Nirvana’s mega-hit Smells Like Teen Spirit was his attempt at copying the Pixies’ style.

The Pixies are one of several artists on this list that also landed on our list of bands like Radiohead. They were originally formed back in 1986, releasing four full-length studio albums until their disbandment in 1993.

They came back in 1994 and are still active to this day, with a slightly different lineup. One thing that hasn’t changed is an amazing woman on bass. Just a different one these days. Both of them landed a spot on our list of great female bassists.

While the Pixies usually fitted into the alternative rock category, you can hear some serious influences of punk and noise pop genres. They are also known for combining surf rock and punk music, a combination that no other artists in the 1980s explored to a full extent.

Originally fronted by vocalist Scott Weiland, the Stone Temple Pilots are one of the most influential bands that came out of the late 1980s and the early 1990s.

While they kept their style close to the classic 1970s hard rock music, you can definitely notice their own stamp on it. Going from the 1992 debut album Core, up until 2001’s Shangri-La Dee Da, the band changed their songwriting approach with each release.

The band broke up, only to regroup once again in 2008, with the self-titled album coming out in 2010. Unfortunately, this was the final release with Scott Weiland, who left the band in 2013 and tragically passed away in 2015.

Between 2013 and 2015, lead vocal duties were taken by Linkin Park’s Chester Bennington, although this particular lineup never released an album.

In 2017, they came back again with Jeff Gutt of The X Factor fame. Although older material would be closer to what Nirvana did, we’d recommend that you start with anything, including the last two albums with Gutt on vocals. You can also check out this article on the Plush lyrics meaning.

Temple Of The Dog

If you’re generally into the whole grunge style, then you should definitely check out a grunge supergroup Temple of the Dog. The band was formed back in 1990 and featured Chris Cornell of Soundgarden, and pretty much the entire classic lineup of Pearl Jam.

For better or for worse, the band released only one studio album in 1991. They were active only around this period and disbanded not long after, in order to dedicate their time to their respective bands.

There were some one-off reunions, with the final one taking place in 2016, although Eddie Vedder wasn’t present. Either way, their sole album received much praise by fans of alternative rock, alternative metal, and grunge.

It’s a shame that a band like Mother Love Bone ended their career too soon. This was due to the passing of their vocalist Andrew Wood in 1990. He was pretty much the main creative force of the group.

They lasted only two years and managed to write, record, and release a single album. Titled Apple, this 1991 release is still adored by grunge fans worldwide.

Quite often, music media cites them as one of the most underrated bands of the grunge and alternative rock movements. And for a good reason.

This sole record has only 13 songs on it. It’s actually 14, if you count Lady Godiva Blues, which is the bonus track on the reissued version. There aren’t any fillers and you can go with pretty much any song to see what they are about.

You may know Mark Lanegan as a frequent collaborator of Josh Homme’s band Queens of the Stone Age. If you’re into Nirvana and QOTSA, then his main band Screaming Trees might interest you.

Many music fans and critics have compared his style to Tom Waits and Leonard Cohen. And we can confirm that. His overall alternative rock and grunge style was fused with some blues and folk rock elements over the years.

As for the main band Screaming Trees, they’ve always gone more into the psychedelic direction. If you like grunge, but also bands that sound like Tame Impala, there is a good chance you will enjoy the Screaming Trees.

Of course, we can’t complete this list without mentioning Dave Grohl and the Foo Fighters. After Cobain’s passing and the disbandment of Nirvana, Grohl questioned whether having a musical career is still worth it.

Fortunately, he went on to record an entire album worth of material all on his own under the name Foo Fighters. The only help he got was from Greg Dulli, who recorded guitar parts on one of the songs. The recording turned out pretty well, eventually getting attention from major labels.

At this point, the Foo Fighters are one of the big names keeping rock music alive. They were even recently nominated for the Rock And Roll Hall of Fame.

Although they’ve distanced themselves from the classic grunge style over the years, the band’s early material was closer to what Nirvana did, with heavier guitar riffs and an overall punk rock approach to songwriting and performing.

If you enjoy Nirvana, you will likely enjoy at least some of the bands mentioned above. In addition to the music another unfortunately similarity is that many of the bands listed here no longer exist, because one or more members have died (usually due to drugs or suicide).

If you want even more recommendations, try our lists of groups like Breaking Benjamin, Imagine Dragon-like bands, or bands that sound like Metallica.

If you want more content about Nirvana, we have an article that breaks down the Smells Like Teen Spirit lyrics & meaning. Not many even understood the lyrics, let alone the meaning behind them. If that is you, the article will prove insightful.