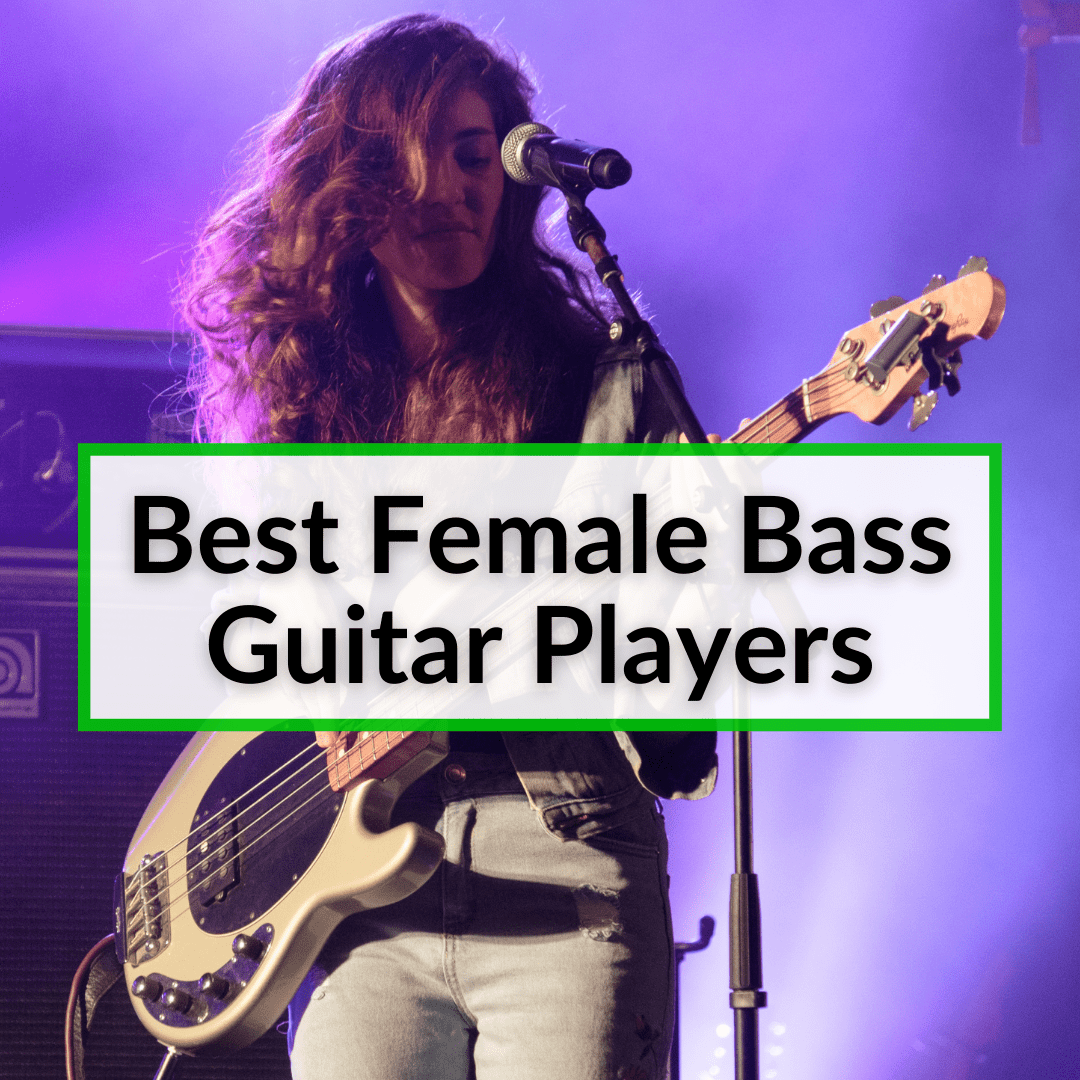 The way they move as they groove is just so sensual.

I’ve heard people say that having a female bassist is a gimmick. A way for a band to attract male fans.

They their playing is average at best, but they give male audiences something to look at.

Those people need to check out the the list of best female bass guitar players below.

You could remove the word “female” from the title of this article and still make a strong case that it is true.

These are some of the greatest bassists alive. Check out the videos below and see for yourself.

Before most girls even picked up a bass, one highly influential bassist, Carol Kaye, played on thousands of hits as a member of the famed Wrecking Crew, a top session orchestra from Los Angeles.

Her specific style was playing melodic bass lines, often syncopated. It wasn’t overly unorthodox, but gained a lot of attention during the 60s. Carol also used upper registers to better accompany melodic bass lines, a style that has been copied ever since.

One bassist who deserves to be far more well-known is a certain Tal Wilkenfeld, an Australian prodigy who played with Herbie Hancock, Chick Corea, Prince, The Who, The Allman Brothers, Toto, Jeff Beck, and many more!

Like Carol Kaye many decades before, Wilkenfeld rose to fame at a very young age playing guitar in jazz clubs, and quickly became a sought-after bassist, at the young age of 21. Often dubbed as “the future of jazz,” Tal has kept recoding and is now “the present of jazz.”

Tal likes to play the bass as if it were a lead guitar, but with such precision that even Jeff Beck called her “an anchor that corrects our mistakes.”

Kim Gordon of Sonic Youth & Jackie Fox of The Runaways

Both members of bands whose inclusion in the Rock And Roll Hall Of Fame is routinely claimed, Fox and Gordon represent just two of hundreds of female bassists.

Gordon helped launch the alternative rock sound of the 90s with Sonic Youth, and the bass lines of Fox (whose real name is Jackie Fuchs, the German word for fox) highlighted the hard rock of the 70s with the Runaways.

Carol Kaye could (and did) play just about anything. She was an exceptional performer. And while few bass players can match her in musical range and ability, there are number of bassists who share her talent for writing simple, unforgettable bass lines that define genres and eras.

One is Kim Gordon and her aggressively melodic bass on Sonic Youth. Another is the Pixies’ Kim Deal, who provided fantastic bass lines with some massive 90s alt-rock bands and, like Gordon, shared or assumed vocal duties on some of the band’s biggest songs.

Although it may not seem like they have much in common, Deal and Kaye mastered the art of simplicity, stripping down what could have been overly-charged bass lines to the most essential notes and rhythmic accents. See her live doing Gigantic in 1988.

Much like Kim Deal playing in the Pixies, Tina Weymouth’s bass in Talking Heads functioned as a rhythmic anchor and propulsion engine beneath the band’s guitars and synths.

Weymouth not only comprised half of the funkiest art-rock rhythm section ever, but also authored what is perhaps the funkiest bass line in rock history with her own project Genius Of Love by Tom Tom Club.

It’s almost impossible to imagine what the ’80s would sound like without Weymouth’s bass…although we could have lived without her dance moves.

US radio DJ David Jensen once said that Suzi Quatro “grabbed rock by the throat and encouraged women to become rock stars.” Suzi is widely considered the first bass player to become a mainstream rock star.

She was definitely a pioneer in breaking down doors for other bass players (and musicians in general). In fact, several bassists mention her as an influence. One example is the previously mentioned Tina Weymouth, who learned to play bass listening to Quatro’s albums.

A paradigm of the seventies hard rocker, with an energetic and defiant style, Quatro began her musical career at the age of 14.

At the time, she was playing bass in the girls’ band The Pleasure Seekers, which later changed its name to Cradle, alongside her sisters Patti, Nancy, and Arlene.

They released a couple of singles and Quatro received so much media and public attention that she ended up signing with the UK label RAK Records.

She released her self-titled debut in 1973, which featured the #1 UK hit Can The Can. But perhaps it was her role as Leather Tuscadero on the hit TV series Happy Days that gave her the most exposure in the US.

With hits in the UK, Europe, and Australia, Quatro is estimated to have sold over 50 million copies in her long career, and performed more than 100 concerts a year.

No list of female bassists could ever be complete, of course. There’s always one more name to add, one more riff to savor, and one more discussion of who’s overrated or underrated.

Ndegeocello is very technical but she also possesses great taste. Much of her music has flown under the radar, though she has a long career playing rock, pop, hip-hop, funk, and jazz.

Most audiences might know her version of Van Morrison’s Wild Nights with John Cougar Mellencamp and her neo-soul hit If That’s Your Boyfriend. Here’s a taste of her fantastic skill doing Dead End live on KCRW.

Starting her career as a jazz double bass player, Esperanza Spalding is an accomplished multi-instrumentalist blending traditional American jazz with Latin and Brazilian music, to give us a unique and funky mix of wonderful sounds.

Her technique is geared towards fast, complicated riffs and wacky grooves that drive the song forward and give the listener a chance to really enjoy the bass, without having to turn an ensemble piece into a solo.

She taught herself to play the violin at the age of 5 and was part of the Chamber Music Society of Oregon for 10 years. She left the orchestra when she was 15 years old.

Becoming a multi-instrumentalist, Spalding mastered oboe and clarinet before finally taking up the bass guitar in high school, where her outstanding musicianship did not go unnoticed.

Since then, she has been one of the most fascinating personalities in the musical world, the part of it that has its epicenter in jazz, but is not limited to that genre.

With several solo albums and collaborations with various artists, Spalding became the first jazz musician to take home the Grammy for Best New Artist in 2011.

A nationalized American born in Argentina, Paz Lenchatin is currently the bassist for the Pixies. She came from a family of musicians, and moved to Los Angeles when she was little.

She started playing the piano at the age of five, following later with the guitar, violin, cello, and other instruments. Among them, of course, was the bass guitar.

Prior to the Pixies, her most notable job was playing bass and providing backing vocals for A Perfect Circle. She was also the bassist for Billy Corgan’s side project Zwan and stoner rock group The Entrance Band (formerly known as Entrance).

In addition to playing bass, she is an accomplished violinist and has contributed string arrangements to  a wide range of musical artists, including Jenny Lewis, Melissa Auf der Maur, and Queens Of The Stone Age.

The diversity of playing various instruments is evident in her style. She can play mellow stoner bass lines, as well as something more rock and roll (Pixies).

Before Rob Zombie became a solo artist, he was the leader of the band White Zombie, which featured one of the most charismatic bass players on the scene: Sean Yseult.

She was a key player in the band’s sound during its 11 years of existence. Her very dirty and heavy bass lines and tone played an important role in the group’s success, especially on big hits like Black Sunshine and Thunder Kiss ’65.

After White Zombie disbanded, Yseult played for a while with the legendary The Cramps and then moved away from public exposure. She still plays and performs, although not as prominently as before.

Naturally, White Zombie’s music requires a fast and aggressive style of playing, which Sean did magnificently. But recently, she has been into a stoner rock style, which is a bit calmer and easier (it’s not easy playing metal after 50).

This is just a short sampling of excellent female bass players, not only in rock but also in jazz, soul, etc.

Are there any additional bassists you feel should have been included in this list? If so, please feel free to let us know in the comments below. Similarly, let us know if you feel one of the artists we included does not belong on this list.