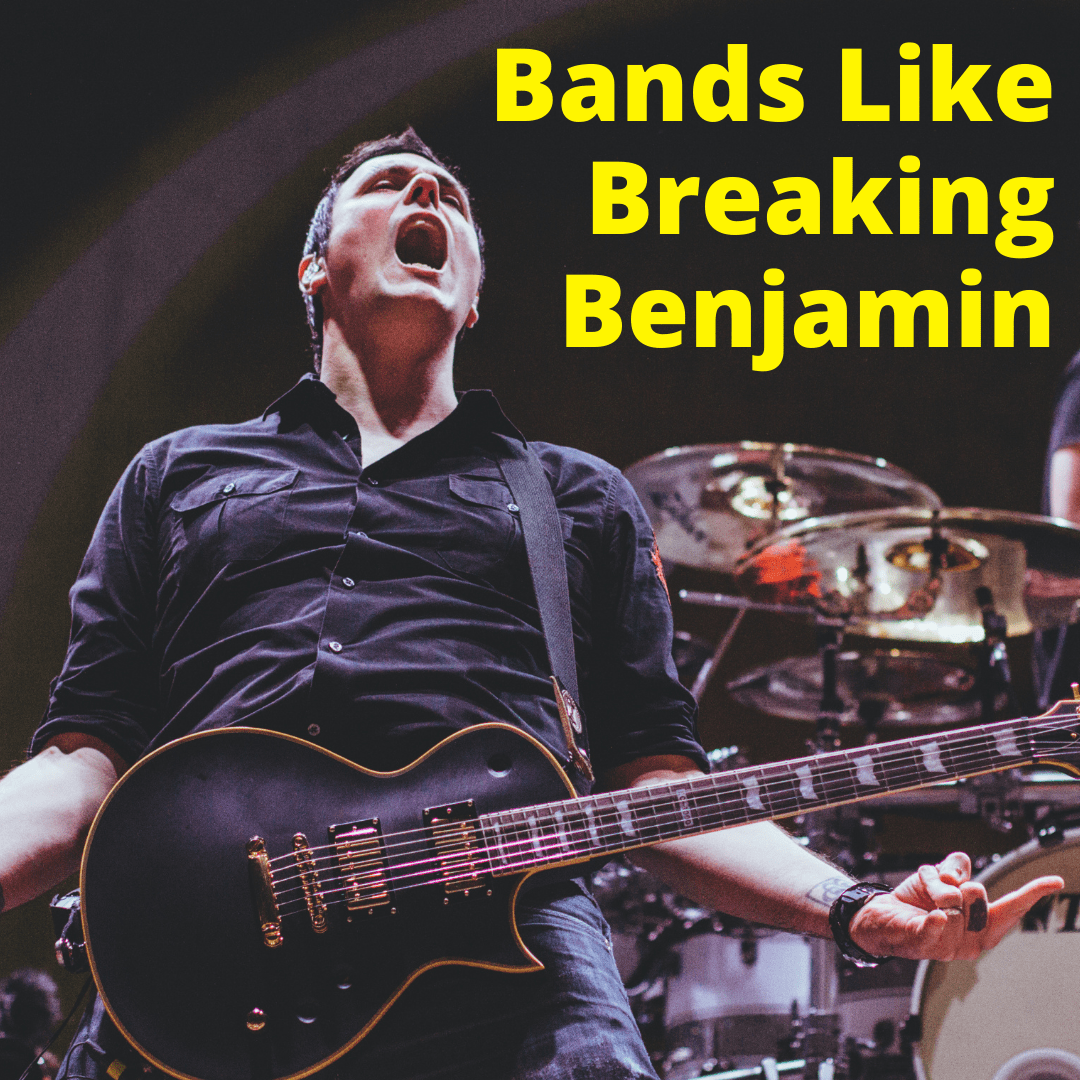 But it’s hard to find good bands among the millions of bad and mediocre ones.

I tend to begin my search for new music by starting with a group I already know and love. Then I look for ones that sound similar.

When it comes to bands like Breaking Benjamin, you can end up with a long list of diverse artists.

Keep reading for our favorite groups that sound like Breaking Benjamin, or that have some other strong similarity.

Formed not that long before Breaking Benjamin, Skillet is one of the most prominent bands associated with the Christian Rock movement.

Music-wise, their basis has always been the mixture of classic hard rock and heavy metal with some alternative rock and nu metal influences.

Bassist and vocalist John Cooper has led the band since 1996, serving as the principal songwriter and the main creative director.

Although they are usually associated with the Christian Rock movement, Skillet is popular even outside of those circles.

What’s great about A Perfect Circle is that they’re fairly popular among lovers of all the different subgenres of rock and metal music.

While usually associated with Tool, since Maynard is the vocalist, their style is pretty diverse. The earlier stuff had some of that Tool vibe to it, although they’ve always had a more melodic, rather than heavy and rhythmic, approach to their music.

Although they’ve been around since 1999, A Perfect Circle have released only four studio albums. But having these long breaks doesn’t mean that they’re lazy. They prefer to take time to work on their art and let it happen naturally.

Although the Thirteenth Step album is usually considered the classic Perfect Circle record, 2018’s Eat the Elephant was also met with some pretty great responses, despite being completely different to their previous works.

However, we’d suggest that you start with the debut album and go one by one. That way you can see how they evolved over the years, as well as their divers influences, which even include a group like Depeche Mode.

Starting their work in 1997, Canadian band Three Days Grace are one of the most popular groups associated with the so-called “post-grunge” movement.

But we don’t want to get too geeky about labeling them with a specific subgenre. They can easily be described as an alternative metal band. What’s important here is that a lot of Breaking Benjamin fans are also very fond of bands like Three Days Grace.

Since their inception, bassist Brad Walst and drummer Neil Sanderson have been the only constant members.

The biggest change came with the departure of vocalist and guitarist Adam Gontier, who was basically the face of the band. A suitable replacement was found in Matt Walst, bassist Brad Walst’s brother. They have released two albums with him so far.

Although 2015’s Human and 2018’s Outsider are awesome records, it took some time for fans to accept this change. In fact, both fans and critics weren’t originally that fond of the new style that they adopted on Human.

If you’re just getting into their music, we’d suggest that you start with the first four records, especially the self-titled debut.

Staind is one of America’s most interesting bands from the whole alternative metal and alternative rock movement. However you label them, what’s important is that Staind is usually pretty popular among Breaking Benjamin fans as well.

Formed in 1995, they had the same lineup up until the departure of drummer Jon Wysocki. They’ve usually kept true to their signature style, adding in a few new elements here and there.

They’ve been on a hiatus since 2012, with only occasional limited activity. Singer Aaron Lewis has launched his own solo country music career.

In 2019, they finally got back together and they are planning to release a new record soon. From a commercial perspective, their third album Break the Cycle, released in 2001, was the most successful. That would be a good one to start with.

After Scott Stapp parted ways with Creed, the three remaining members started their own band. With Myles Kennedy on guitar and vocals and under the Alter Bridge name, they’ve embarked on one of the most successful rock and metal careers of the 21st century.

But it’s really hard to put Alter Bridge into a particular subgenre. They’re a hard rock and heavy metal band that likes to explore different territories.

If you’re looking for bands like Breaking Benjamin, we’re certain that you’ll be into Alter Bridge. They do have some heavier stuff, but it’s always followed by Myles’ unique vocals and very catchy melodic passages.

Aside from the obligatory Blackbird, we’d recommend their 2019 album Walk the Sky where they went into some modern metal territories.

Alter Bridge is a band popular among plenty of different music fans. In fact, you’ll find both pop and extreme metal fans praising the band’s musicianship.

Shinedown was formed not long after Breaking Benjamin started their music career. Led by vocalist Brent Smith and drummer Barry Kerch, they have six studio albums so far, all of which could fit the general wider category of hard rock.

They never really liked some of those super-specific genre labels, but they’ve just rolled with it. An album like The Sound of Madness, for example, is a bit different for the band’s classic style.

But whichever album you start with, you’ll notice that they occasionally lean toward heavier music, all while keeping things catchy and melodic in most of their material.

Their influences are pretty diverse though. Anything from Pink Floyd and The Doors, and up to Iron Maiden and Metallica – you’ll definitely notice some elements from all of these classic bands in their works.

If you’re into Breaking Benjamin, we’re sure that My Chemical Romance will also be your thing. While they’re often put into the category of alternative rock, they’re one of the most prominent bands that pushed the whole emo movement during the 2000s.

Compared to the other bands on this list, we’d say that they’re a bit softer. Many also describe them as a pop punk band, although their overall style has been all over the place.

The band is mostly remembered for their vocalist Gerard Way. Although he does have a unique voice and overall appearance, we shouldn’t overlook the great skills and musicianship of guitarists Ray Toro and Frank Iero, and bassist Mikey Way.

After getting back together in 2019, they don’t have a permanent drummer, so Jarrod Alexander is filling in on that spot at the moment.

Another band that formed around the same time, The All-American Rejects is one of the most prominent names among lovers of the emo movement.

The creative duo of guitarist Nick Wheeler and vocalist Tyson Ritter has kept the band together since 1999, ultimately releasing four studio albums and seven extended plays between 2000 and now.

While Breaking Benjamin is in the hard rock zone, The All-American Rejects could be described as a combination of alternative rock and emo pop music. Nonetheless, their stuff is worth a try if you’re into Breaking Benjamin.

Then there’s a band like Chevelle. These classic American alternative rock legends are another band that we can add here.

The band was originally formed by brothers Pete Loeffler and Sam Loeffler, as well as bassist Matt Scott. The lineup soon changed and the third brother, Joe Loeffler, came into the fold. Things changed a bit over the years, but Pete and Sam are the only official current members.

You can hear a variety of influences in Chevelle’s music. One obvious inspiration is Tool, but they also cite The Cure as one of their influences. Throughout their prolific career, they’ve released nine full-length studio albums. Although their sound is diverse, you can’t really go wrong with any of them.

We tried to include a good variety of different bands here, while making sure all of them had considerable similarities to Breaking Benjamin.

Give any of the above bands like Breaking Benjamin a listen and see what you think. You’re sure to find at least one you like. More likely, you’ll like most of them. Perhaps even all of them.

If not, try checking our our article on bands like Imagine Dragons. Some of those might appeal to you, too. Finally, Breaking Benjamin is also named on our list of bands that sound like Nickelback, so that might also be worth checking out.

We are aware there are probably plenty of other good bands that sound like Breaking Benjamin. If there are any you feel belong on this list, please let us know in the comments below.