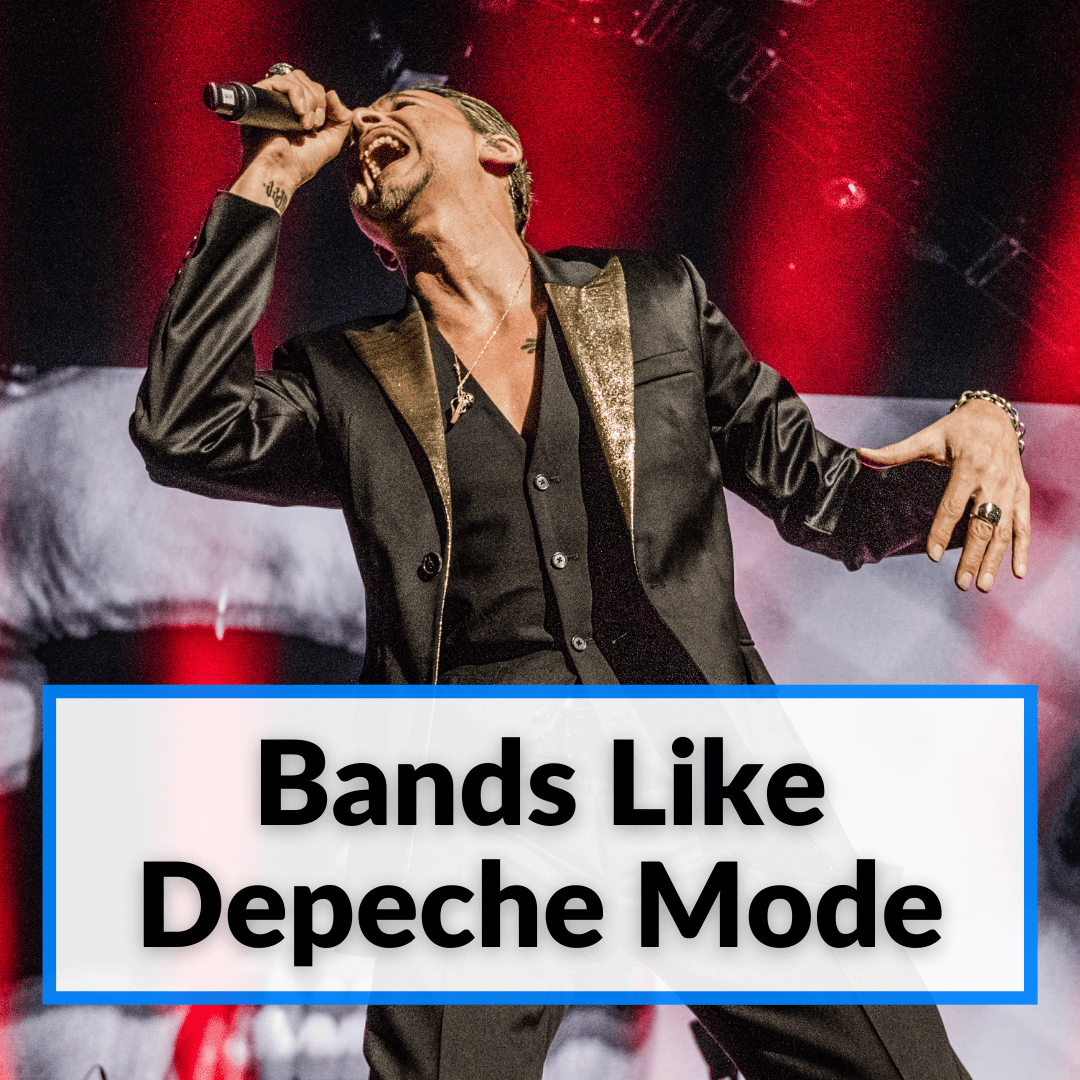 Depeche Mode is probably the biggest techno-pop band of all time.

They were one of the most important bands of the 1980s and their style was a unique blend of genres.

It is that unique sound that makes it difficult to find other bands like Depeche Mode.

That said, there are a ton of artists who do something similar. And even more who were influenced by DM.

Keep reading for a list of some great groups that are sure to appeal to any fan of Depeche Mode.

Of course, the most obvious choice for this list is Recoil. Essentially, this is a solo project by former Depeche Mode member Alan Wilder, who was with the group from the early 1980s to the mid-1990s.

While there are obvious similarities with Depeche Mode, Recoil drifts slightly into other directions. Aside from the classic synth-pop sound, we can also notice some trip-hop elements, and even straight-up techno music.

Wilder started working on this project even during his time with Depeche Mode. This makes it a great choice to listen to, as he was obviously inspired by his work in Depeche Mode.

Active since the mid-1980s, Erasure is an English duo, featuring Andy Bell on vocals and Vince Clarke on keyboards. They were popular in the UK, although their music also caught the attention of synth-pop fans all over the world.

Releasing their debut album, titled Wonderland,” in 1986, the duo started working hard over the coming years. In fact, they’ve had a very prolific career, with a total of 18 studio albums and 7 EPs to now.

Although they never achieved the massive success that Depeche Mode did, you’ll definitely find a lot of stuff that you’ll love in their music.

Now heading over to Germany, Camouflage is a trio that further defined the genre of synth-pop during the 1980s and the 1990s. While they never saw major mainstream success like Depeche Mode, Camouflage still has a lot of great stuff to offer.

Their debut single The Great Commandment from 1987 still remains their most popular work. But there are a total of eight studio albums in their collection, all featuring some pretty awesome synth-pop stuff. You can’t really go wrong with any of their records.

If you’ve gotten into synth-pop, you should definitely check out Chvrches. This Scottish trio belongs to the younger generation.

Formed in 2011, they are obviously heavily inspired by the 1980s synth-pop artists but have also brought their own modern twist to the genre. In some way, we could say that their music is the most balanced blend you’ll find of the old school and new school electronic music.

There are a total of four albums in their catalog. The Bones of What You Believe is their debut record, released back in 2013. In our opinion, it would be the best idea to start with that one and then go from there chronologically.

Also known as C&E, Cause & Effect is an American synth-pop quartet formed back in 1990. Although they haven’t released that much material over the past few decades or so, this Californian band gave a different twist to the genre.

Arguably, their most interesting release was the self-titled debut album from 1990. However, there’s also a bunch of other great stuff, including their final release Artificial Construct (Part Two) from 2011.

Unfortunately, they split up in 2020, officially revealing that they won’t be making music together anymore. Nonetheless, they left their mark on the history of synth-pop and you’ll definitely love their material.

Present on the scene since 1991, Mesh is a synth-pop duo from England, featuring Mark Hockings and Richard Silverthorn. What’s really interesting is that they mix alternative rock with electronic music.

In some way, this brings them closer to the style of Depeche Mode. Although they’re not a massively successful band, they still released some of the most interesting synth-pop stuff out there.

There are a total of 7 albums in their discography, all featuring quality material. They might not be that well-known, but it’s one of the easiest ways to get into new stuff if you’re generally a fan of Depeche Mode.

New Order, on the other hand, is a bit of a different story. There have been plenty of ways to describe their music, but it’s really hard to put them into a specific genre category.

Nonetheless, if you’re a fan of synth-pop, they’re one of the most important names that you should know.

Formed in 1980, their most popular hit song is Blue Monday, released back in the early 1980s. But compared to most of the bands on this list, New Order features a more conventional formation rather than just having keyboards and programed rhythm sections.

Of course, all of the band members do that as well, but it’s still the classic quintet with drums, bass, guitars, vocals, and keyboards. In some way, it’s like Depeche Mode, but with a more ’80s-oriented sound.

A New York-based band, Interpol is a bit of a different story. They’re not technically synth-pop, but their work still resembles some of the Depeche Mode stuff.

Usually labeled as indie rock or a post-punk revival band, they have a pretty solid discography of 6 albums. It’s not a huge amount, especially considering the fact that the first one was released in 2002, but they focused on quality rather than quantity.

Interpol are a really easy band to get into, no matter what kind of music you’re generally into. And it’s safe to say that they’re a good choice for all Depeche Mode fans.

One of the most successful synth-pop bands of all time, Pet Shop Boys have stuck to their signature musical style for decades now.

With 14 studio albums released from 1986 to now, there’s an abundance of great material to choose from, especially for those who are into Depeche Mode.

Of course, they’re far from being the same exact band as Depeche Mode. However, it’s pretty obvious that Pet Shop Boys were inspired by DM’s work. Therefore, it’s really safe to say you’ll love their music as well, if you’re generally into Depeche Mode.

Bronski Beat were a synth-pop trio that started their work back in the 1980s. They achieved massive success with the groundbreaking chart hit Smalltown Boy. Released in 1984, it still remains their most successful song.

Despite the fact that their biggest success was in their early years, they’re far from a one-hit-wonder. They’re also mostly known for the original singer Jimmy Somerville, who later went on to work on other projects. No matter the album you choose to go with, you’ll like Bronski Beat.

Of course, Duran Duran is a band that we simply can’t avoid mentioning here. Coming from Birmingham, England, they’re one of the pioneers of new wave and synth-pop musical styles.

Compared to Depeche Mode, however, Duran Duran are not as dark-sounding. Nonetheless, you’ll definitely love what you hear if you’re into synth-pop.

Another one of the early new wave and synth-pop bands, ABC are an important name to mention here. While their discography is not as rich as Depeche Mode, there’s still stuff that you’ll love.

The easiest way to get into them would probably be with their 1982 debut record The Lexicon of Love. It will definitely be an easy and enjoyable listen, and you can then move on to other albums from there.

Another synth-pop duo from England, Yazoo are an obligatory mention for a list like this one. Featuring Vince Clarke and Alison Moyet, they had a pretty brief career together. The original run lasted only from 1981 to 1983 and they reformed a couple of times later on in the 21st century.

There are only two albums worth of material in their discography, 1982’s Upstairs at Eric’s and 1983’s You and Me Both. Both are pretty awesome and will definitely find their place on your playlists if you’re into Depeche Mode.

Orchestral Manoeuvres In The Dark

Another English band on the list, Orchestral Manoeuvres in the Dark are one of the most important names of the early electronic, new wave, and synth-pop movements in the early 1980s.

The group went through a lot of changes during their career, with bassist and vocalist Andy McCluskey remaining the sole original member throughout the years.

Although they’ve stopped releasing new music as often as they did back in the early 1980s, there’s still an abundance of great stuff to check out from all of their eras.

If you want to get into them, we’d suggest trying some of their biggest hits, like Enola Gay or Electricity. Wherever you decide to start, you won’t regret it.

For the last entry on this list, we’re once again visiting Germany to check out Wolfsheim. This was a synth-pop duo active between 1987 and 2004.

During this period, they released a total of six full-length studio albums. Despite their disbandment, Wolfsheim are still popular among synth-pop fans and they’re one of the easiest bands to get into.

Depeche Mode changed the landscape of music with their unique techno-pop sound. And it made them one of the biggest bands ever.

There are a lot of bands like Depeche Mode, in that they do something similar. But very few are comparable.