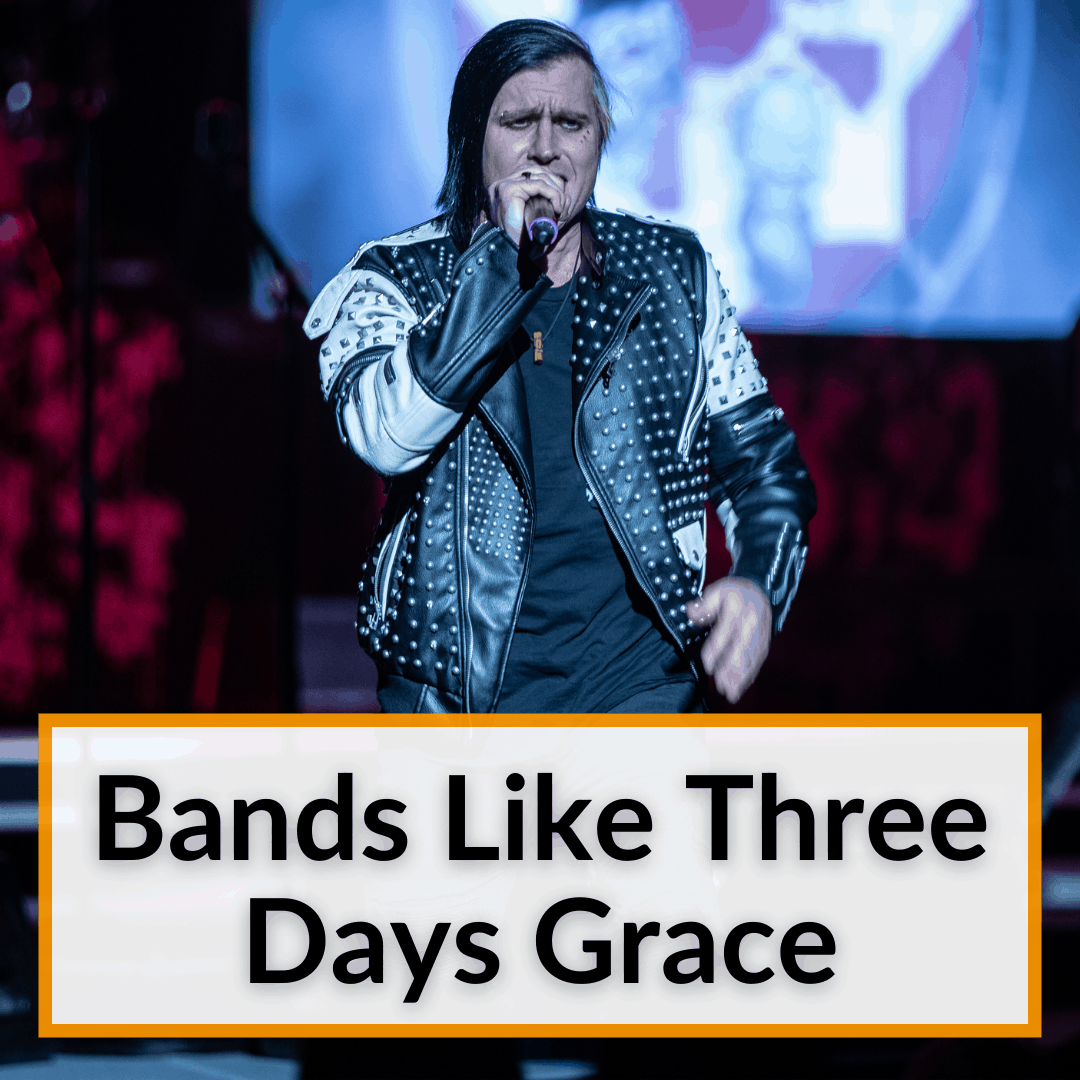 When you think of famous Canadian bands, most people think of Rush.

But Three Days Grace have built up a pretty sizable following as well.

They’ve also been fairly prolific, putting out a new album every 3 years since 2003.

But no matter how much new music they make, it’s never enough, is it?

That’s why we compiled this list of bands like Three Days Grace. Keep reading for some great music to keep you entertained while you wait for the next album.

Coming from Ontario, Canada, Thousand Foot Krutch has been led by guitarist and singer Trevor McNevan since their formation in the mid-1990s.

Originally known as Oddball, they changed their name to Thousand Foot Krutch before the release of the 1997 album That’s What People Do.

They’ve always worked as a trio, with McNevan remaining the sole original member throughout the years. Although mostly lumped into the Christian rock category, the band’s style has also been described as nu metal, rap rock, or simply hard rock.

They have a total of nine albums released as Thousand Foot Krutch. There’s also one album that they released as Oddball back in 1995. Pretty much all of them are worth checking out.

Another band labeled as Christian rock or Christian metal, Skillet have a pretty wide audience, gathering a lot of different rock music fans. These days, we can also add the alternative rock and even the symphonic metal genres to describe their overall style.

Be that as it may, there are plenty of Three Days Grace fans that are also very fond of Skillet. The band has been led by vocalist and bassist John Cooper since their formation back in 1996. In 1999, his wife Korey joined the fold, ultimately changing the band’s sound.

If you’re interested in a nu metal or alternative metal band with some electronic and symphonic elements, then Skillet should definitely be added to your playlists. And besides, they’re really easy to get into if you’re generally a fan of rock music.

Bringing us back to the late 1990s, Breaking Benjamin is one of the most important American bands from that era. Led by Benjamin Burnley, after whom the band was named, we could describe them as hard rock, alternative metal, or even post-grunge.

But whatever kind of genre label you put on them, the most important thing here is that you can always recognize their unique style. With Benjamin Burnley leading the way, they’ve incorporated a lot of different elements in their work.

At the same time, people can compare them to bands like Five Finger Death Punch and the band Coldplay. This only speaks of their musical diversity and innovativeness.

If you really want to get into their music, we’d suggest going with their debut album Saturate from 2002. They’ve released a total of six records, with Burnley remaining the sole original member over the years.

Starting their work at the beginning of the 2000s, Shinedown combines alternative metal with classic hard rock. At the same time, you can notice an abundance of other elements in there, even stuff like pop, grunge, and Southern rock.

However, as the band members have explained, they can’t put a single genre label on their music and are just doing their own thing and are shifting their styles with each album.

Shinedown are most often remembered for their singer Brent Smith. He and drummer Barry Kerch are original members who remained in the lineup since their formation. There are a total of six albums in their discography.

Most often, their 2008 record The Sound of Madness is considered to be their most representative work. Nonetheless, they’ve been climbing up the charts with each new release, so every single album is worth checking out.

Another alternative metal band formed back at the end of the 1990s, 10 Years have a pretty rich discography so far. With a total of nine albums released between 2001 and today, there’s a lot of interesting stuff in there worth checking out.

What’s interesting is that they’ve seen a lot of changes over the years. For instance, lead guitarist Brian Vodinh has worked as a drummer for most of the band’s career. But this only speaks of the band’s diversity and quality musicianship.

As for their style, they’ve explored a lot of different territories. It’s not a surprise that they’ve been described as alternative metal for the most of their career.

Aside from Three Days Grace, people have also compared them to Tool, especially due to vocal similarities between their singer Jesse Hasek and Maynard James Keenan.

Papa Roach is a band that brings some nostalgic feelings to a lot of people who grew up during the 1990s and the 2000s. If you’re fond of the classic 2000s nu metal style, then they’re definitely worth checking out.

Although formed way back in 1993, they only released their debut album Old Friends from Young Years in 1997.

The two members who have remained since the beginning are singer Jacoby Shaddix and guitarist Jerry Horton. Bassist Tobin Esperance has been present on all albums, and they also feature Tony Palermo on drums.

They have released 10 albums so far. As far as their style goes, they’re usually described as nu metal and alternative metal. They’re really easy to get into, and a lot of people know them for their legendary hit Last Resort.

With singer Brad Arnold, who originally also acted as the drummer, leading the way, 3 Doors Down are one of the most important groups of the so-called post-grunge movement.

Between 2000 and now, they’ve released a total of six albums. Sure, this isn’t much. But they always focused more on quality rather than quantity.

Their commercially most successful record, and the one that fans usually prefer, is the second one: 2002’s Away from the Sun. 2008’s self-titled is also pretty popular, as well as 2005’s Seventeen Days. Both topped the charts in the USA.

They’re a pretty easy band to get into. If you like Three Days Grace, you’ll definitely enjoy 3 Doors Down. Both of these bands also made our list of bands like Nickelback, so you might want to check that out, too.

They might be a bit different, but Falling in Reverse is a band that shouldn’t be left off this list. Essentially, they’re a great choice for anyone who gravitates towards emo, metalcore, and post-hardcore kind of stuff.

Compared to other bands mentioned here, Falling in Reverse are younger. Staring their work in 2008, they’ve released four albums so far. Singer and keyboard player Ronnie Radke has remained the sole original member throughout the years and is the band’s creative mastermind.

While slightly different than most of the bands here, there are clear parallels that we can draw between Falling in Reverse and Three Days Grace. To put it simply, they’re a better choice for anyone who prefers emo and metalcore kind of stuff over the regular hard rock and alternative metal styles.

Keeping most of their lineup stable over the years, Staind are a classic American band. They’re also mostly associated with the alternative metal movement, although there’s definitely a diversity to their style.

They’ve achieved some pretty great commercial success in the United States, with a lot of their singles achieving high chart positions. Most notably, they’re known for It’s Been Awhile from the 2001 album Break the Cycle.

They’re mostly known for their singer Aaron Lewis (which has turned into a huge detriment, to be honest), although their lineup has been really stable over the years. The only change came in 2011, with drummer Sal Giancarelli replacing the original member Jon Wysocki. Staind was also included in our list of groups list Chevelle.

If you like the type of stuff Aaron Lewis does now (i.e. more country), check out our article on the Cover Me Up lyrics meaning. This tune by Jason Isbell is also more country and, quite frankly, far better than anything Lewis could ever write.

Originally coming from South Africa, Seether are now a well-established name of the American post-grunge movement. From their formation to today, the band has mostly been led by singer and guitarist Shaun Morgan, who serves as the creative mastermind.

In 2002, they released their first album, titled Disclaimer. After its success, they did the follow-up Disclaimer II, which came out in 2004.

The latter release achieved platinum status, and so did the next two records: Karma and Effect and Finding Beauty in Negative Spaces. These first four records are considered their best work, so we’d suggest that you start with them.

Of course, Three Days Grace fans are still saddened by Adam Gontier’s departure from the band. If you’re still fond of his unique voice and musicianship, definitely check out Saint Asonia.

Adam formed the band with guitarist Mike Mushok of Staind, bassist Corey Lowery of Seether, and Rich Beddoe of Finger Eleven. But over the coming years, Lowery and Beddoe were replaced by Art of Dying’s Cale Gontier and Cody Watkins.

If you like these bands and would like to hear the combination of styles with Adam Gontier’s work, then definitely check out Saint Asonia.

Another band that we’d like to feature here is the Ontario, Canada-based My Darkest Days. This alternative rock and post-grunge group was active between 2005 and 2013.

Although their career was short-lasting, there’s some awesome stuff worth checking out in their catalog. There were two albums released during this period, 2010’s self-titled debut and 2012’s Sick and Twisted Affair.

If you’re a fan of Three Days Grace, you’re sure to enjoy at least some of the bands listed above. All are similar in some way.

We know there are other bands like Three Days Grace that we could have included, but we feel that these are the best among them. For some similar options, check out our article on bands that sound like A Day To Remember.

Do you agree, or do you feel we should have included any other groups? Please let us know in the comments below if we left out any bands you feel should have made the list. Or if you feel any of our choices simply don’t belong.