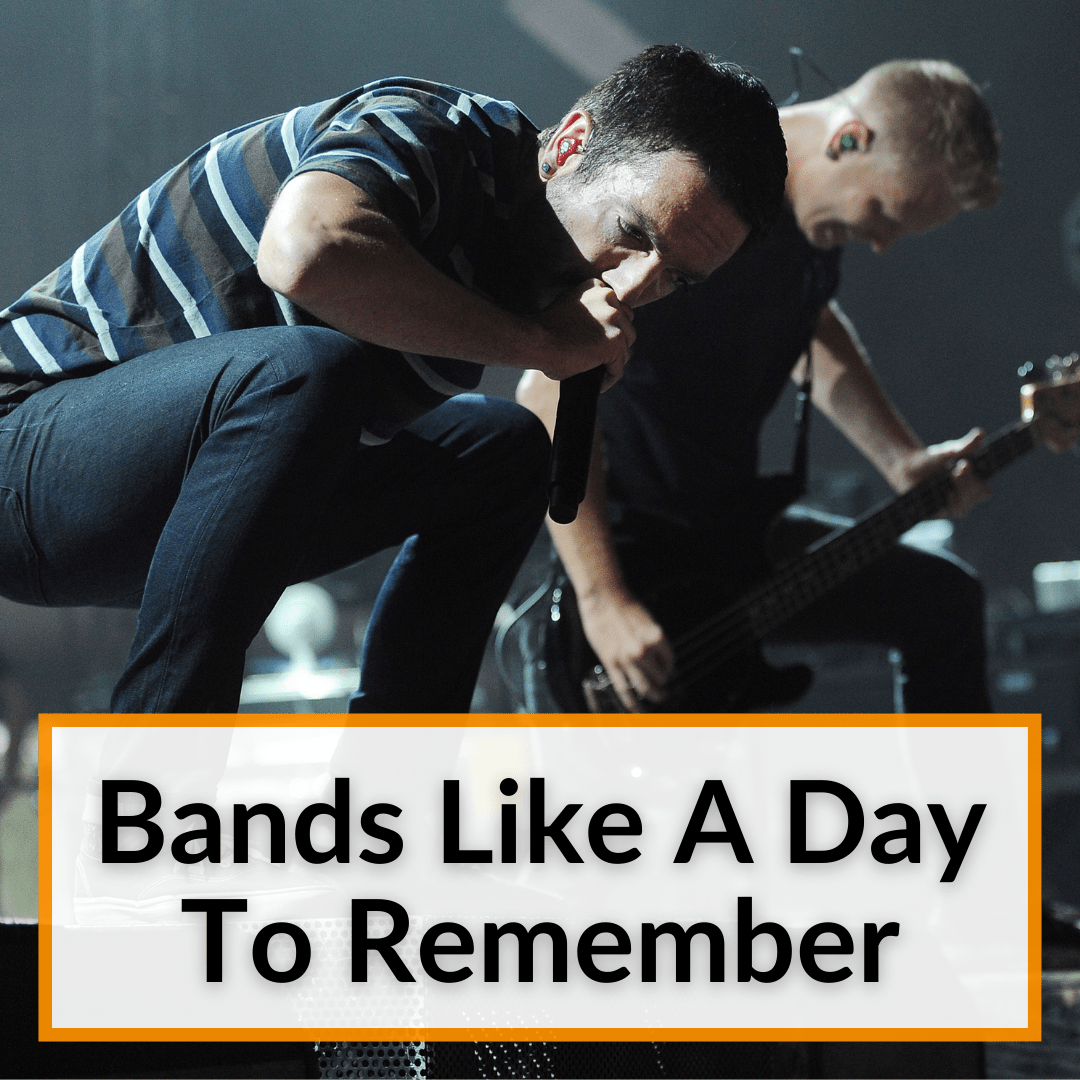 Several genres of metal were popular in the 2000’s, like pop punk, metalcore, emo, etc.

And A Day To Remember seemed to combine them all.

This gave them a pretty unique style and sound.

It also makes it a little harder to find other bands like A Day To Remember.

Keep reading for a list of some great artists that have some type of similarity with ADTR.

Coming from Ontario, Canada, Silverstein is one of the most popular post-hardcore bands of all time. Also associated with the whole emo movement, they’ve had quite a career from their start in 2000.

With a total of 10 albums, they’ve further explored the post-hardcore genre, giving it their own unique twist. Over the years, they’ve had a mostly stable lineup with guitarist Josh Bradford, drummer Paul Koehler, and vocalist Shane Told making up the core of the band.

They’re a pretty easy choice if you’re generally into bands like A Day to Remember. Silverstein have also been present on a lot of the Vans Warped tours, so that’s another way to describe their overall musical style.

Bless the Fall, also popularly known as “blessthefall,” are a band from Phoenix, Arizona. Their musical style is usually described as metalcore and post-hardcore, although many have categorized them as Christian metal as well.

Whatever genre label you decide to put on them, they’re definitely a group that you should check out if you’re into A Day to Remember. Since their formation in 2004, they have released a total of six albums.

They’ve mostly kept to their signature metalcore formula when making music. At the same time, they’ve had a certain number of musicians passing through the lineup, with the bassist and vocalist Jared Warth remaining the only constant member since the band’s formation.

Also known as just OM&M, Of Mice & Men are another important metalcore band. But they’re younger than some others here, having formed in 2009.

Nonetheless, they’ve already had some important lineup changes and they technically don’t have any original members remaining in the fold.

If you’re a fan of classic straight-up metalcore with some raw nu metal added to the equation, you should definitely check out Of Mice & Men. They have 6 albums in their discography and you can notice how their style evolved over the years.

With some later records, they’ve even got into classic heavy metal or even melodic metalcore. They’re definitely a pretty diverse band.

Memphis May Fire are a Texas-based band that have given a slightly different twist to the now-established metalcore genre. From their formation in 2006 to now, they have released 6 full-length studio albums.

As it usually goes with metalcore bands formed during the 2000s, they have changed their style over the years. Interestingly enough, they also incorporated southern rock into metalcore on their debut full-length album Sleepwalking.

It’s a pretty interesting blend, especially knowing that metalcore was kind of a new thing in that era. With later albums, they even started exploring classic pop rock, which just shows how versatile they are as musicians.

This alone makes them a great choice if you feel like getting into new music. Needless to say, they’re also very popular among musicians of various different genres.

When it comes to rock, metal, and all of their subgenres, Australia is an underrated goldmine. In this very diverse collection of bands, we can find a group like The Amity Affliction.

Formed back in 2003, they can roughly be described as a melodic metalcore band with some serious post-hardcore elements as well.

The band is pretty much led by vocalist and bassist (who was a vocalist and rhythm guitarist during their first few years) Ahren Stringer. He’s also the sole original member at this point.

They started releasing music in 2004 with their demo EP. Two more EPs were released before their first full-length record Severed Ties in 2008. Over the years, they became popular outside of Australia as well and are now one of the most important metalcore bands in the world.

It would be really hard not to mention Escape the Fate on this list, especially since they’re an American band that started working around the same time as A Day to Remember.

On the other hand, they lean more towards post-hardcore stuff, as well as classic hard rock. Both aesthetically and sonically, they can also be put under the emo label.

With their debut EP There’s No Sympathy for the Dead and debut full-length album Dying Is Your Latest Fashion, Escape the Fate immediately started off as an emo and post-hardcore band. Their later releases saw them experimenting more, going from pop punk to straight-up metalcore.

Rise Against takes us a bit further back. Formed in 1999, they released their first album The Unraveling in 2001.

This debut was more of a classic hardcore record with some melodic elements in there as well. They slowly started shifting their style, eventually going more towards classic punk rock.

They’re a bit different than most other metalcore bands that usually end up going towards pop punk or just straight up pop music. We’d recommend Rise Against to those who are more into conventional hardcore.

Coming from Long Island in New York, Taking Back Sunday is more of an alternative rock band with some emo elements. Of course, there are some post-hardcore elements in there as well, but they’re still more associated with the pop punk movement due to their overall musical style.

Starting in 1999, Taking Back Sunday released their debut record Tell All Your Friends in 2002. They were pretty open to experimentation over the years.

For instance, their 2016 album “Tidal Wave” was even described as a heartland rock record. Either way, you could always notice their signature style, no matter how people labeled their genre.

We Came As Romans

Now heading back to some classic metalcore, We Came as Romans are one of the most important bands of this particular genre. If you’re looking for something in the style of A Day to Remember, but feel like you want things to get heavier, they’re your go-to band.

The group’s discography consists of 5 full-length albums and 2 EPs. And there’s a lot of exciting stuff to check out. For instance, their debut full-length record To Plant a Seed was even described as an “electronicore” album.

It’s important to note that their fans were very fond of keyboard player and co-lead vocalist Kyle Pavone. Unfortunately, he passed away in 2018. The band continued without him and have decided not to replace him with a new member in order to respect his legacy.

Then we have a band like Beartooth. Despite the fact that they’re a younger band that formed during the early 2010s, they’re more of a conventional hardcore punk band with some metalcore and melodic hardcore stuff in there.

You’d expect newer groups to go more into post-hardcore and pop-oriented metalcore. But ever since their formation, they were more old-school-oriented.

In fact, their debut full-length studio album, 2014’s Disgusting, even had some crossover thrash elements.

Despite their overall heavier orientation, they did go into some pop punk territories on the 2018 album Disease. They’ve definitely shown some diversity, something that speaks to their great musicianship.

Yes, they might have a bit of an odd name. But Chunk! No, Captain Chunk! is an awesome band. Coming from France, they’ve mixed metalcore with pop punk on most of their material.

And this is a pretty interesting combination which they later changed on the 2021 album Gone Are the Good Days.

This kind of diversity should definitely be interesting to all of the fans of A Day to Remember. They don’t conform to a specific genre label and just combine musical elements that they love.

Four Year Strong is a quartet that predominantly relies on pop punk. At the same time, they’re quite fond of metalcore, which you can notice in their works.

Present on the scene since 2001, this Worcester, Massachusetts-based group has released a total of 7 full-length studio albums.

Going through their discography, we can definitely notice the similarities between Four Year Strong and A Day to Remember. However, Four Year Strong is predominantly a pop punk band like Blink 182, so it’s a good choice if you feel like going more into that direction.

Attack Attack! is a band that drew attention with their 2008 song Stick Stickly from the debut studio album Someday Came Suddenly.

Both the song and the video were pretty divisive, causing some mixed reactions among contemporary rock and metal fans.

In particular, it was their unconventional use of electronicore elements, as well as the “crabcore” meme that started with the band members’ moves in the video.

Be that as it may, Attack Attack! are a pretty good band if you’re into post-hardcore, emo, and metalcore stuff. After a long hiatus, they reformed in 2020 and have even released new material in 2021, including a very short song Kawaii Cowboys that mixes country, metalcore, and J-pop.

We tried to include a variety of bands and styles, while making sure they all have some similarity to ADTR. We’re sure you’ll find at least a few of these bands like A Day To Remember to be right up your alley.

What do you think of the list? Do you agree with our choices, or do you feel some of them simply don’t belong? Are there any bands we left off that should be on the list?

Please let us know in the comments below.