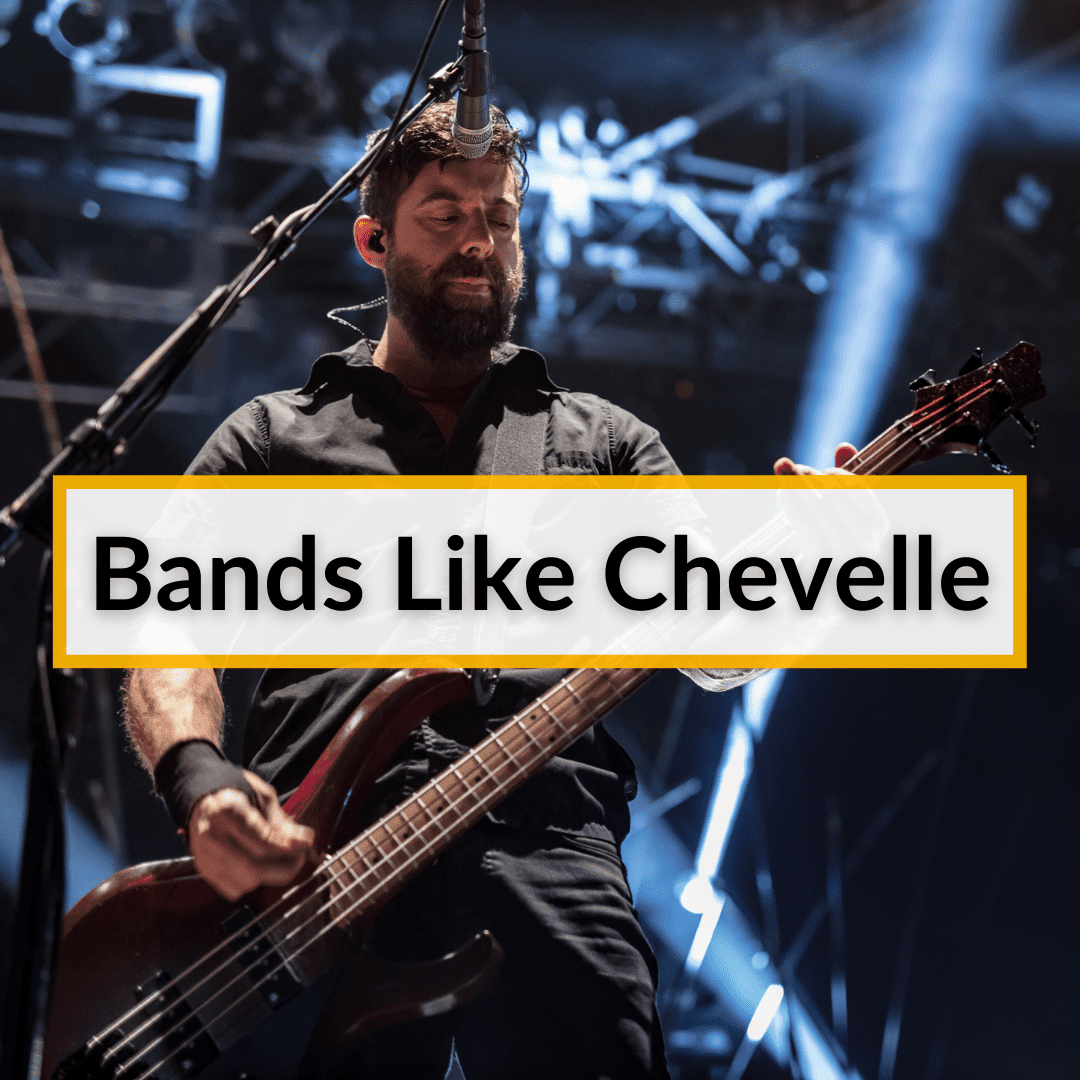 Chevelle often gets compared to Tool.

But we decided to leave Tool off this list.

For one, the comparison is too common. But we also don’t feel it makes that much sense.

There were some songs in the past where there was a resemblance to Tool.

But Tool has evolved far too much since then. The comparison just isn’t accurate any more.

And Chevelle has changed too, but in a different direction.

Besides, there are plenty of other bands that sound like Chevelle.

Keep reading for a list of great bands like Chevelle. You’re sure to find some great new music here.

Over the past years, this band has recorded six studio albums. It has had singles that have reached the top of the charts and has sold more than 20 million albums worldwide.

The first songs they played tended to be covers of groups known at the time, such as Korn, Rage Against The Machine, Pearl Jam, or Alice In Chains. They played in small clubs for a year and a half, until they released their first album Tormented in November 1996.

The first album had musical influences from Pantera and Machine Head. Tormented only sold four thousand copies, being a hard-to-find album at the time. With the future success of the band, this album would be released again in response to numerous requests from fans.

During that first year, Staind played a concert with the nu-metal band Limp Bizkit. Fred Durst, the frontman of Limp Bizkit, wanted to release Staind because of their album cover. He thought it was satanic.

He changed his mind when he heard them live, thus initiating a relationship of friendship and cooperation between the rapper and Staind.

Another band quite similar to Chevelle is the well-known South African rock band Seether. The band made its debut with the album Disclaimer.

Their style is influenced by bands like Cold and Staind, and the lyrics that accompany their songs reveal the most intimate essence of its vocalist and songwriter Shaun Morgan.

After fighting a battle against suicide, Morgan discovered that the antidote to depression and the will to die is found in music.

Beyond an existentialist whim, the only thing he seeks with his songs is to leave his mark, and as he says, to leave the world better than he found it. For this reason, the lyrics of his songs, despite being a bit crude and controversial, have an explanation in the unfortunate life of the listener.

The band was created in Johannesburg in 1999 under the name Saron Gas. It was later renamed Seether and in 2000 they recorded their first album Fragile.

The band’s album Disclaimer was produced by Jay Baumgardner who has worked with bands like Papa Roach and Drowning Pool. The album features songs like Pig, Morgan’s tormented cry against his family, and Gasoline, which has some of their hardest lyrics.

In addition to Morgan, the group was formed by Dale Steward (bass), Kevin Saffera (drums), and Pat Callahan (guitar). Wind Up Records bought the rights for the band. It is the same label that works with Creed.

Breaking Benjamin is a band that was created in Wilkes-Barre, Pennsylvania (USA) in 1998 by Benjamin Burnley, who still belongs to the group to this day. The genres that are presented in Breaking Benjamin’s music are Alternative Metal, Progressive Metal, and Post-grunge (similar to Chevelle).

Although the band is still active today, they had a break in 2010 due to certain illnesses that Benjamin had. Also, in 2011, two of the band members were fired and the drummer decided to leave, so Benjamin could not continue alone as it was too much work.

Later, in 2013, he announced that all those problems had been solved and that he would focus on the future of the band. He resumed his normal rhythm in 2014.

The name of the group comes from years ago when Benjamin was a soloist and sang Nirvana covers. In one of his performances, he threw the mic to the ground breaking it, to which the owner of the mic came up on stage and said “I want to thank Benjamin for breaking my damn mic.”

Cold is an American alternative metal band from Jacksonville, Florida, formed in 1996. Their sound is similar to that of bands like Breaking Benjamin, Staind, Taproot, Seether, and, of course, Chevelle.

Cold, originally called Grundig, was formed in 1996 by vocalist Scooter Ward, drummer Sam McCandless, bassist Jeremy Marshall, and guitarist Matt Loughran. The band initially settled in Jacksonville but later moved to Atlanta to try to gain a foothold in the music industry.

The band slowly made a name for themselves in Jacksonville and was followed by Limp Bizkit vocalist Fred Durst, a story similar to the one of Staind. Impressed by what he had heard from them, Durst invited Ward to record two acoustic songs, Check Please and Ugly.

The second album was far more successful than their debut album and peaked at #1 on the Billboard Heatseekers chart, as well as entering the top 100 on the album chart.

The third album Year of the Spider was their best-seller. After that album, numerous problems with the label occurred, many lineup changes followed, and the band members eventually parted ways.

However, in 2009, the band started touring again, which lead to two more studio albums in 2011 and 2019 respectively.

Godsmack was formed in Massachusetts in 1995. Its founding member is the musician, singer, percussionist, and guitarist Sully Erna. He was later joined by Lee Richards on guitar, Joe D’Arco on guitar and drums, and Tommy Stewart also on drums.

Over the years, several new musicians would enter the band and remain until the present: Tony Rombola on guitar and vocals, Robbie Merrill on bass, and Shannon Larkin on drums and percussion.

In the beginning, the band was called The Scam, but after recording their first demo, they changed their name to Godsmack.

They began performing covers, but were also composing their own songs little by litte, making themselves known first in their hometown, and then projected throughout the United States.

In 1996, the band launched their first production called All Wound Up. Said album was promoted in the city of Boston, including the hit Keep Away, which gave them entry into the English market. After this, the band performed at festivals like Ozzfest and Woodstock ’99.

People liked them and they began a tour throughout Europe with the band Black Sabbath. In 2002, Godsmack released the album Awake, earning a Grammy nomination for the song Vampires as best rock vocal performance.

The same year, Sully Erna was asked to compose the soundtrack with the band for the movie The Mummy. Many albums and tours followed, like one with Motley Crue. The band’s latest album came out in 2018.

Born somewhere in the Arizona desert, Puscifer is an Electro-Rock band, multimedia experience, traveling circus, and a group of survivors of alien abduction.

The band brings a unique mix of recorded production and stage theater, combining each release with a live concept show. The musical style resembles that of Chevelle.

This is mainly thanks to Maynard James Keenan, also the leader of Tool and A Perfect Circle, a musician idolized by fans who enjoy his different sounds. The dense and experimental environments of Maynard’s darker personality is perfectly accompanied by Carina Round’s voice and Matt Mitchell’s guitar.

Beyond the main trio of Maynard James Keenan, Mat Mitchell, and Carina Round, the group includes Greg Edwards (bass, guitar, keyboards), Gunnar Olsen (drums), as well as a cast of characters that appear during the shows.

Scott Anderson (voice), Sean Anderson (bass), James Black (guitar), Rob Gommerman (drums), and Rick Jackett (guitar) were classmates in the city of Burlington, Canada, not so far from Toronto. Together they found in music a place to express their feelings of frustration, anger, and loss.

In 1994, that triggered the launching of their first disc Letters From Chutney, under the band name “Rainbow Butt Monkeys”.

Over time their music began to consolidate and the band was renamed Finger Eleven, inspired by one of the first versions of the song Thin Spirits. In 1997, the band released their debut album Tip.

The previous music had a sound more related to funk and heavy metal, but Tip evolved towards a more melancholic style that referred to Doom metal. The album went quite unnoticed in the US.

But things changed with the launching The Greyest Of Blue Skies, in the year 2000. After a tour to present the album, the band decided to take their time to create what would be their third album Finger Eleven, which was released in 2003.

The album has a more varied atmosphere than its predecessor, encompassing different ranges and emotions, going from distorted and heavy sounds to almost minimalist balances.

In 2006 the band began working on a new album Them vs. You vs. Me, which was released in March 2007. Two more albums have been released to this day: Life Turns Electric in 2010 and Five Crooked Lines in 2015.

Despite leaving Tool off this list, there were still plenty of other bands like Chevelle to choose from. We narrowed the list down to the best of them.