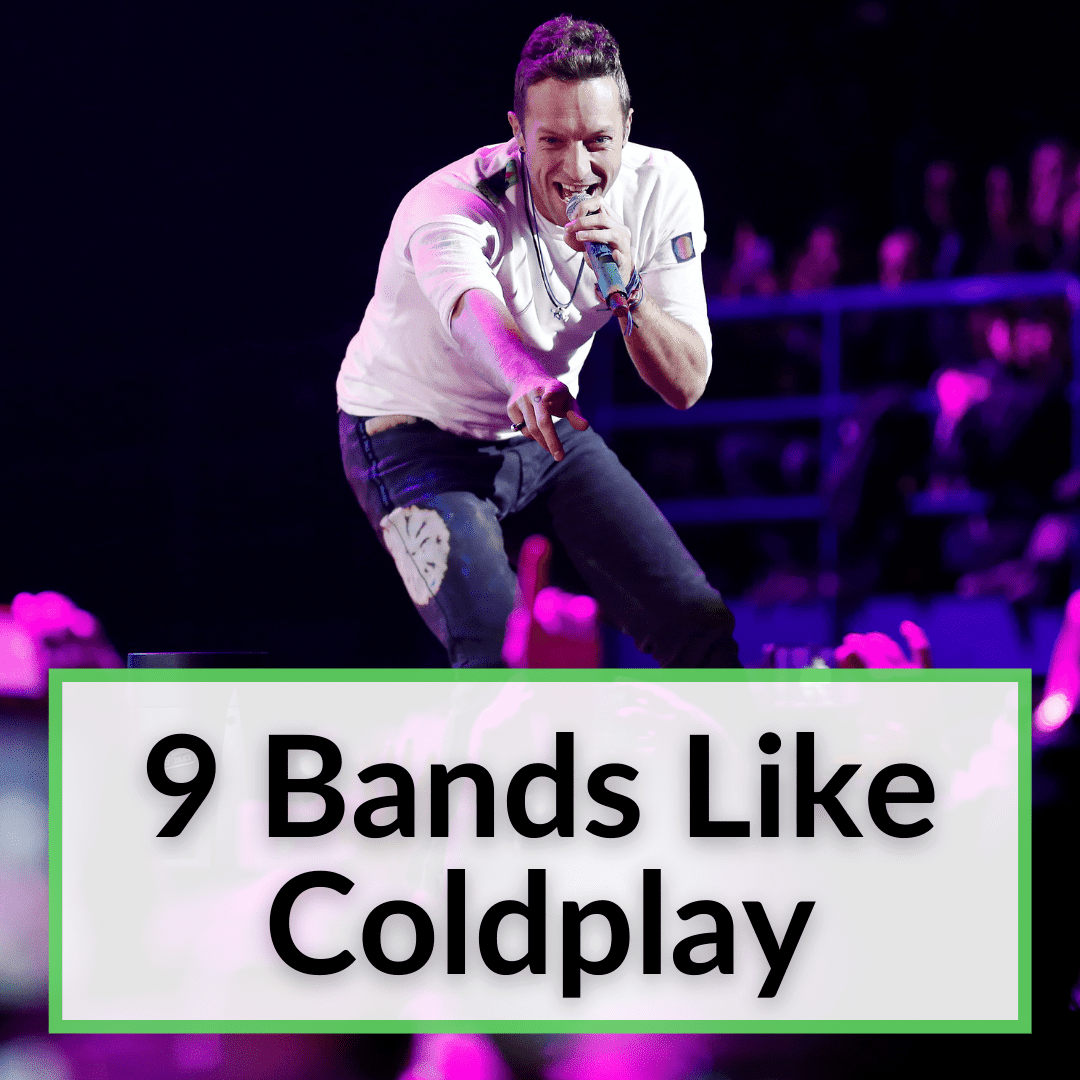 Coldplay is one of the biggest British bands ever.

That’s saying something, considering the caliber of bands that have come from the UK over the years.

Naturally, that means there are a lot of bands like Coldplay out there. Groups that were influenced by them to some degree.

There are also huge bands that came before and influenced Coldplay.

Keep reading for a list of great bands that sound like Coldplay. It includes both their influences and those influenced by them.

It only seems logical to start off this list with Imagine Dragons, since the band is arguably as popular as Coldplay. And, of course, they play the same music.

The band gained popularity in 2012 when they released their first studio album Night Visions, which brought the band to second place on the Billboard charts.

The same magazine and MTV named them the “Rising Band” for the year, and Rolling Stone named the song Radioactive the best rock single of 2013.

Their second studio album Smoke + Mirrors came out in early 2015 and peaked at No. 1 on the following charts: Billboard 200, Canadian Albums Chart, UK Albums Chart. Their debut album Night Visions is currently declared a platinum album in 8 countries.

This band is less well-known than Imagine Dragons and many people have no idea how many similarities Snow Patrol has with Coldplay. Maybe after this, Gary Lightbody, Nathan Connolly, Paul Wilson, Tom Simpson, and Jonny Quinn will gain more fans.

Both groups were formed in the mid-1990s and the positions they acquired were largely the result of not-so-subtle copying of tricks from big role models: U2.

Bono and the rest of the band didn’t mind. On the contrary, they publicly praised “their children” and took them on tour as pre-groups (Snow Patrol also did the last one: the U2-360).

Meanwhile, both bands have become mainstream attractions (Coldplay, however, somewhat bigger) thanks to some great songs. The first associations to Snow Patrol today are Chasing Cars and Open Your Eyes from the best-selling British album in 2006, Eyes Open.

Coldplay members were aware that after four of Coldplay’s and five of Snow Patrol’s stylistically more or less the same studio albums, they were ready to give up their identity for the sake of expanding their artistic horizons. That’s how similar the two bands are.

Guess who’s next on the list? That’s right, Bono, Adam Clayton, Larry Mullen, Jr., and The Edge have influenced thousands of bands, including Coldplay.

Do you remember a time when Bono was not among the rock gods? It’s hard to believe that the once small Irish band U2 originated in the post-punk scene in 1976. It was then that their first album Boy was released.

There are many interesting stories about the band U2 and their debut album. One of them, for example, is that the band was almost disbanded for religious reasons. Christianity did not support rock bands.

The phenomenal band achieved incredible success and became one of the greatest bands of all time, giving us hits like Stories For Boys, The Electric Co., An Cat Dubh, I Will Follow, and Out Of Control. And all of that from one album!

Before Bono became some kind of mutation of the song The Fly, equally good songs were released, some even better and stronger, like October, War, The Joshua Tree, Rattle and Hum, or Achtung Baby.

Whenever a music playlist at a party has Coldplay on it, it is 99% certain that a song by Maroon 5 will follow soon. Why? Because it’s the same quality music people listen to today.

Adam Levine is the frontman of the band made of seven members. They released countless songs that were hits on the charts and their first album debuted in 2002. Current members of the band include Jesse Carmichael, Sam Farrar, Matt Flynn, Mickey Madden, PJ Morton, and James Valentine.

There are a lot of fascinating facts about this band, and one of them is that the music video for the song Sugar was recorded at real weddings to which the band came in unannounced. Some shots from the video were staged, of course, but many were not.

In addition to winning three Grammy Awards over the years and making music history with their hit Is Anybody Out There, the band has always remained true to their pop-rock roots.

OneRepublic is basically a pop band, but they have a lot more to offer than that. Their influences very often go to the fields of indie, alternative rock, folk, and even EDM. Due to this variety, many of their songs resemble those of Coldplay.

The band members include frontman Ryan Tedder, electric guitar players Zach Filkins and Drew Brown, drummer Eddie Fisher, and bass and keyboard player Brent Kutzle. Tedder, in addition to being known as a multi-instrumentalist and frontman of the band, is also known as a songwriter and producer.

Tedder is known for being able to write a huge radio hit like Counting Stars, for which half of today’s pop performers would give their right hand. Not only that but also intimate, introspective songs with a much deeper meaning, such as earlier hits All The Right Moves and Secrets.

R.E.M. was a legendary rock band that was together for 31 years. During those years, they created quite a reputation in the music world.

The very beginnings of the band go back to the University of Georgia, the university where all four members studied. Those four are, of course, Michael Stipe, Bill Berry, Mike Mills, and Peter Buck.

They released their first album Murmur three years after the band’s founding. It picked up very good reactions from the audience.

However, the fame of Murmur was only an introduction to the large numbers that would come to be associated with their releases.

Among the most famous is Out Of Time. This album has sold more than four and a half million copies in the United States and has reached as many as 18 million people worldwide.

Unfortunately, R.E.M. ceased to exist in September 2011, and on the exact date of the breakup, September 21, ten years later, it was announced that the band members would never function as a whole again.

Mike Mills, the bassist, said the band disbanded after years of discussing it. The band decided to stop playing together out of “great reasons” and the desire to come out of that story as friends.

When you hear a song like Bittersweet Symphony, how can you not hear similarities with Coldplay?

Richard Ashcroft, the leader of the British quintet The Verve, is a guy with a very clear picture. He knows what he wants, how he wants it, and how far he can go.

The quintet he formed with Nick Mc Cabe, Simon Jones, Simon Tong, and Peter Salisbury was just another band on the British scene. But Ashcroft said, without the slightest hint of doubt: “History has a place for us. This will probably take us three albums, but we’ll be there.”

He was right! In 1997, when their third album Urban Hymns was released, The Verve went on to become the most important band in England. Before Urban Hymns and the song Bittersweet Symphony, the name The Verve did not say much to the general rock public.

However, despite the fact that fame had not knocked on their door, the group had a very solid collection of songs. Songs like All In The Mind, She’s a Superstar, and Gravity Grave all topped the charts of independent companies.

In case you didn’t know, Train is a very popular band in the United States. They are a pop music group with rock influences. Sound familiar? Yes, just like Coldplay.

Train has received many awards for music, such as ‘Song of the Year’ for Hey Soul Sister in 2011. An older award is the Grammy for ‘Best Rock Song’ for Drops of Jupiter in 2002. The Grammys are very prestigious awards, and Train has three. What better proof do you need that Train is an excellent band?

Some examples of good Train songs are Meet Virginia, Marry Me, and Hey Soul Sister. Many people like all the songs on the Save Me, San Francisco album, because they sound quite similar.

The band was formed in 1994, in Los Angeles, California. The band was originally formed by Charlie Colin, Pat Monahan, Rob Hotchkiss, Scott Underwood, and Jimmy Safford. The latter three still remain, with the addition of Drew Shoals, who joined the band in 2014.

Much like OneRepublic, it is impossible to describe Elbow in just a few words, because Elbow is not a simple alternative rock band. It manages to encompass a few rock subgenres, be it indie, avant-garde, alternative, pop opera, and even orchestral rock!

The band is very proactive, to the degree of having been praised by Radiohead, REM, Coldplay, and Blur, by whom Elbow was heavily influenced. There is no Elbow song that does not refer you to the best of each of the mentioned bands (Coldplay included).

There are so many bands like Coldplay out there that we really had to cut out a lot of them to keep the length of this list reasonable. We tried to keep only the absolute best groups.

Do you think we succeeded?

Let us know in the comments below if you feel we should have included any other bands, or if some of the ones we did include don’t belong.