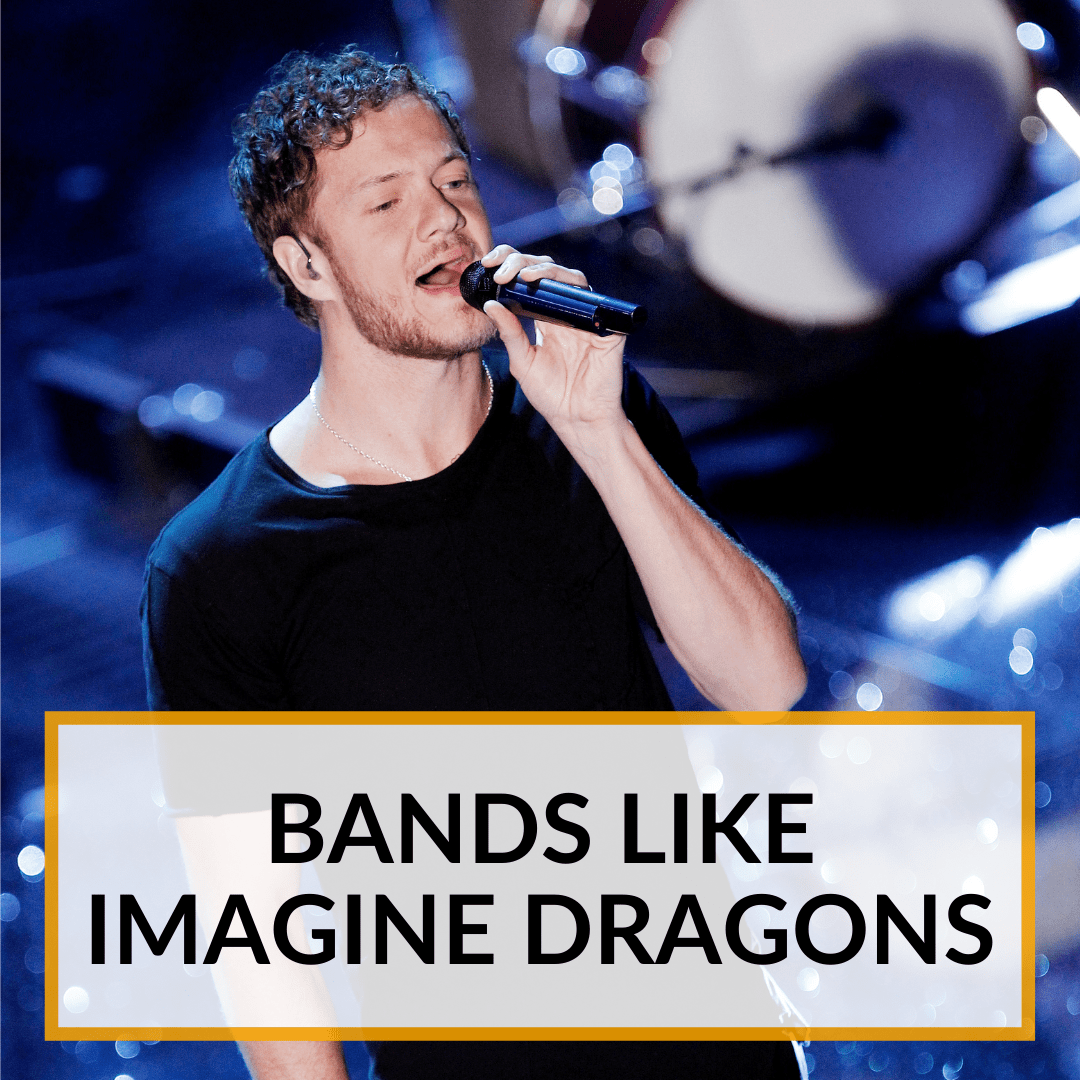 Imagine Dragons are probably the most successful band of the 2010s.

You can’t expect another band to emulate that.

But there are some great bands like Imagine Dragons out there.

They might not all be quite as successful, but if you like Dan Reynolds and co, you’re sure to enjoy at least a few of the following groups.

If you’re looking for a group similar to Imagine Dragons, the easiest answer is OneRepublic.

Although maybe just a bit more cheerful and more in the vein of conventional pop music, they’re still pretty close to what Imagine Dragons sound like.

Additionally, they also operate as a 6-piece band, holding a formation similar to some rock bands. But no matter how you categorize them, OneRepublic is a band that you should not miss out on.

There’s the mega-hit Counting Stars, which you’ve most likely heard. But there’s also a lot of other quality stuff in their body of work, including Love Runs Out, Didn’t I, All the Right Moves, Secrets, and others.

Then we have Twenty One Pilots, who are one of the most influential duos of today. Mostly known under their stylized lowercase name twenty øne piløts, the group consists of singer and multi-instrumentalist Tyler Joseph, and drummer Josh Dun.

The band originally started out as a trio back in 2009, with Joseph and two other members, releasing the debut self-titled album in this formation. From 2011 onwards, they’ve been working as a duo, releasing four more records.

Just like most other mainstream pop bands, they have their super successful hit, titled Stressed Out. Other great songs also include Heathens, Level of Concern, Ride, and Car Radio.

Up next, we’d like to look into Foster the People, a group that’s an obligatory mention if there’s a talk of bands like Imagine Dragons.

And you’ve definitely heard their song Pumped Up Kicks. Although it caused various reactions due to its controversial theme, it’s still one of the most popular modern pop rock songs.

The group is currently working as a quartet, with Mark Foster and Mark Pontius being the band leaders. If you want to get into Foster the People and have already heard Pumped Up Kicks, we’d recommend anything else from their debut full-length record Torches as a good place to start.

Of course, Maroon 5 is one of the most successful bands of the past few decades. If you’re really into Imagine Dragons but haven’t gotten the chance to hear much, or any, stuff from Maroon 5, we’d advise you to do so.

The band is older than Imagine Dragons, starting their work back in the mid-1990s under the name Kara’s Flowers. They’re mostly known for their vocalist and guitarist Adam Levine, although the band features six members now, all of whom are proficient musicians.

Looking into all of their albums, including three that were released under the Kara’s Flowers name, Maroon 5 have always explored different musical genres and blended them into their own style.

If you want something that’s more punk rock, then a band like Fall Out Boy is worth checking out. There are similarities with Imagine Dragons and other pop and pop rock groups mentioned here, but they’re still doing things their own way.

Formed in 2001, the band has been working with a solid four-piece lineup for quite a while now, releasing a total of seven albums.

Although their overall style can generally be categorized as emo, Fall Out Boy enjoyed exploring electronic music, R&B, power pop, and many other styles.

Lead vocalist and rhythm guitarist Patrick Stump is most often the one who comes up with the band’s music, while bassist Pete Wentz handles all the lyrics.

While most of the groups here are predominantly pop, relying on the contemporary popular element, Foals took a different direction. Instead of just doing the safe stuff, they’ve begun adding progressive rock and math rock elements into their music.

At the same time, they mix it with dance-punk, giving them a rather unique sound. Although it does sound a bit crazy, it all (somehow) works in perfect harmony.

Formed in Oxford, England back in the mid-2000s, they’ve had a pretty prolific run so far. There are a total of six full-length studio records and seven EPs, all filled with quality stuff that made them very popular in indie rock circles.

Foals are a great choice if you’re feeling more experimental and want to try out some music you’ve never heard before.

Blind Channel are a different kind of band, although you can definitely notice some similarities with Imagine Dragons and other groups on the list here.

They refer to their own style as “violent pop” but they’ve most often been categorized as post-hardcore. There’s a lot of stuff in their music, anything from soft vocals and melodic passages, up to actual extreme metal-inspired growls and screams.

Coming from the Finnish city of Oulu, they’ve become widely known after their participation in the 2021 Eurovision Song Contest. Aside from the song Dark Side that we’ve heard during this event, there’s a lot of interesting stuff on all three of their full-length studio albums.

If you like a good combination of catchy pop with some heavy guitars, growls, and other metal elements, then Blind Channel is for you.

Everything always takes us back to Coldplay. A legendary British band, and a legitimate heir to U2’s throne, the group has conquered the hearts of millions of fans worldwide.

In fact, their music is so popular that they’ve got such a large following that fans of all genres enjoy their music. It seems that their formula works pretty well. See our list of bands like Coldplay for an idea how many groups have copied their sound since.

Their music is more laid-back and kind of low key compared to Imagine Dragons. Nonetheless, their work is worthy of praise. They have delivered multiple albums and other releases over the past decades, topping the charts all over the world.

You might be thinking that this is not the best place for metal bands, but we’re not talking a group like Metallica here. Linkin Park is a band that has always added pop elements in their music, mostly with their song structures. In some ways, we could call them a pop and hip-hop band with mostly metal-centric arrangements.

Their One More Light album, the final one prior to Chester Bennington’s tragic passing, was a full-on pop record. But you’ll definitely enjoy their heavier stuff as well, like the classic album Hybrid Theory.

The Killers are a classic band that opened up the 21st century. Although they’re usually categorized as alternative rock or indie rock, the band explored other territories as well, most notably new wave and even post-punk stuff.

It all blends in perfectly with some other styles they’ve explored, like classic soft rock, electronica, glam rock, and synth pop. It comes as no surprise that the list the band Depeche Mode as an influence.

Their music is as honest as their philanthropic work over the years. There are a total of six albums in their catalog, but we’d recommend the earlier stuff if you want to get into them. The song Mr. Brightside has great lyrics and music and is a perfect example. This is not a band that you should overlook.

Panic! At The Disco

Panic! At the Disco is another very obvious choice if you want a band similar to Imagine Dragons. They’re a group often associated with the emo movement, although they changed their style over the years.

Starting in 2015, it pretty much turned into a solo project of singer Brendon Urie. At the same time, Urie’s music evolved, going away from their punk and emo-inspired roots to more of a mainstream pop sound.

Therefore, we recommend you go with either of the two albums released as Urie’s solo work under the Panic! At the Disco moniker.

Also known as XA or just Ambassadors, X Ambassadors are a modern alternative rock trio. They originally started as a quartet, but are now left with three members after the departure of Noah Feldshuh.

If you want a clearer picture of their style, they usually cite the Red Hot Chili Peppers and Incubus as their main influences. But being a modern rock band with some pop elements, they’re also pretty popular among some Imagine Dragons fans.

They have three albums so far, as well as four EPs. You won’t regret starting with pretty much any of these releases.

Originally coming from Kentucky, Cage the Elephant is an alternative rock group that experiments with plenty of other styles as well. Of course, they’ve evolved over the years, but you’ll definitely enjoy their sound, if you’re into Imagine Dragons.

But be aware that they go more into some psychedelic rock oriented territories, along with occasional blues or even punk elements. But it is definitely a band worth checking out.

Going strong since 2007, The Script is an Ireland-based trio consisting of vocalist Danny O’Donoghue, guitarist Mark Sheehan, and drummer and multi-instrumentalist Glen Power.

Over the course of their six full-length studio albums and four EPs, they’ve explored a few different genres, even combining hip hop and Celtic music with their alt-rock style. You can always recognize their unique style, no matter which of their songs is playing at the moment.

Some of the above bands have reached similar levels of success to Imagine Dragons, but most have not. Despite that, they are great bands that have a similar sound or style. That is why they made our list of bands like Imagine Dragons.

One of the groups Dan Reynold’s lists as an influence is Nirvana, but we did not list them here, since they don’t have much in common. But if you like Nirvana, check out our list of similar bands to Nirvana.