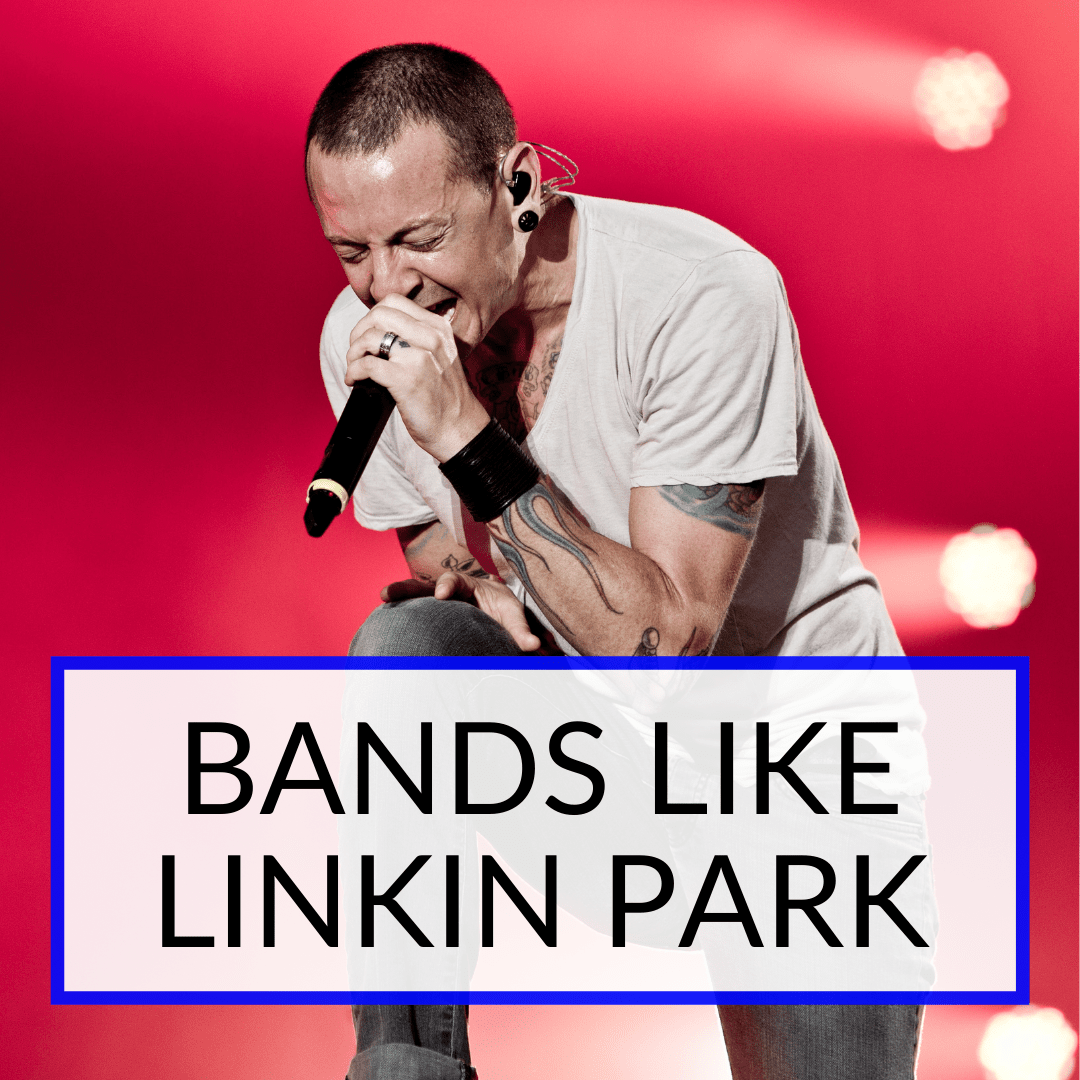 Linkin Park was one of the defining bands of the early 2000s.

They mixed rap and metal better than anyone, at least in terms of commercial success.

The reason for that is a heavy pop influence in their music.

But they were not the only band doing this at the time.

But all had something in common with Linkin Park. You’ll find the best of them below.

Formed back in 1997, Three Days Grace is a Canadian band known for their unique post-grunge and alternative metal style.

When it comes to their overall direction, there are certainly some parallels you can draw with Linkin Park. You have heavy parts; you have softer parts; you have clever combinations of both.

The band is known for two distinct eras. From its very beginning, it was fronted by Adam Gontier who suddenly left in 2013. He was replaced by Matt Walst.

Matt is a great musician, but the band’s classic fans had a hard time accepting this change. Despite the change, you won’t go wrong with any of their albums if you want something that’s close to Linkin Park.

Up next, we’d like to mention Skillet, a Tennesee-based band that’s mostly associated with the Christian rock movement. But they have a lot of great stuff to offer, be it religious-oriented or not.

Led by bassist and lead vocalist John Cooper, as well as his wife, vocalist and multi-instrumentalist Korey Cooper, the band explored many different territories over the years. John is the only original member remaining at this point, but Korey is also a creative force that leads the band.

Although we could define them as an alternative metal band with a Christin twist, there are even some symphonic metal elements in Skillet’s music.

This doesn’t necessarily sound like something that’s close to Linkin Park, but you’ll notice some similarities when you play their music. This is especially the case with their earlier material.

Evanescence is one of the many bands that came into the spotlight not long after Linkin Park. What makes the band stand out is Amy Lee and her unique vocals.

At this point, she’s the only original member remaining, and the creative leader of the band. The band has five albums under their belt, but Bring Me to Life from their 2003 debut album Fallen is still the song they’re mostly associated with. The song also featured Paul McCoy of 12 Stones doing the recognizable rap lines.

As the years went by, the band added some new stuff to their style. But even today, you can still notice their classic recognizable nu metal style. For the most part, Linkin Park and Evanescence fanbases overlap.

Coming from Pennsylvania, Breaking Benjamin is a band known for their hard rock and post-grunge style. The lineup has been dynamic, but the band is led by vocalist and guitarist Benjamin Burnley, who is the sole original member at this point.

Once again, we have a band that has an interesting blend of heavy and soft stuff. From their 2002 debut album Saturate up to 2018’s Ember, you can still notice Benjamin’s classic style, despite the fact that the band evolved.

Pretty much any of their stuff is worth checking out if you’re into Linkin Park. The old saying goes for Breaking Benjamin – all killer, no filler!

Formed back in 1993, Papa Roach finally released their debut album in 1997, right around the time when the whole nu metal movement was exploding.

Although they are a bit heavier than Linkin Park on average, we can definitely notice some similarities between these two bands. From their earliest stuff in the late 1990s and up to present-day material, we’re certain that you’ll like Papa Roach and their music if you’re into Linkin Park.

At this point, singer Jacoby Shaddix and guitarist Jerry Horton are the only original members. The duo is also the main creative force, writing most of the group’s material over the decades.

Although they had some stylistic changes, we’d encourage you to try out any of their albums. The safest bet is the oldest material from the late 1990s and the early 2000s.

Up next, we’d like to mention another Tennessee-based alternative metal band that’s associated with the Christian rock movement. Red have been present on the scene since 2002.

Their breakthrough came with the 2006 debut album, appropriately named End of Silence. Although they had some lineup changes, the core of the band remains the same, with singer Michael Barnes, guitarist Anthony Armstrong, and bassist Randy Armstrong keeping the name alive from the very beginning.

This is yet another band lumped under the so-called post-grunge umbrella term. But you’ll definitely notice some similarities between Red and Linkin Park.

Bring Me The Horizon

If you’re into Linkin Park, especially some of their heavier stuff, Bring Me the Horizon is one of the easiest bands to get into. One striking similarity is that both bands gravitated more towards pop music as the years went by.

With BMTH, you’ll get anything from the mid-2000s metalcore and deathcore, up to electronica-infused pop-rock. And it’s all worth a listen, it if you’re a fan of Linkin Park.

Still, it is an unusual twist for a band that started with metalcore and deathcore. But to be perfectly honest, they’ve proven to be really good with all of the styles that they covered. There’s definitely something for everyone’s taste in their discography.

If rap rock and rap metal are the styles you appreciate the most in Linkin Park’s works, then Hollywood Undead is the band for you.

Starting back in the mid-2000s, they’ve always focused on bringing the best possible energy to these otherwise completely opposite styles. They blend it so well and you’ll definitely enjoy all of the groove-filled tunes that they’ve released over the past years.

Led by Jorel “J-Dog” Decker, a musician who’s been the only constant member since the beginning, Hollywood Undead features multiple vocalists. They’re more rap than metal or rock, but there’s definitely stuff for fans of both styles.

Although Limp Bizkit can seem very different from Linkin Park, there are some obvious similarities as well. After all, both bands not only belong to the nu metal movement but have helped define it.

Either way, we have two bands that have a significant overlap in fanbases. Therefore, Limp Bizkit is maybe not completely like Linkin Park, but it’s worth checking out.

If you like the heavier groove-filed aspect of LP, then Limp Bizkit would be a great choice. Additionally, we’d also like to mention the very underrated guitar work by Wes Borland. Although not a virtuoso in the classic sense of the word, his approach to the instrument is pretty innovative.

Formed back in 1994 in Chicago, Illinois, Disturbed is yet another classic name in the world of nu metal. Even if you haven’t heard of the band before, there’s a high chance that you’ve stumbled upon their hit Down With the Sickness.

Although this is the song that they’re the most famous for, their catalog includes plenty of other awesome pieces. Disturbed have seven albums under their belt so far.

The earlier stuff from the early 2000s is probably closer to what Linkin Park was doing back then. Above all, they’re way more than just their hit song Down With the Sickness, so make sure to look deeper into their discography.

There’s a high chance that metal-oriented readers are weirded out or angered by the addition of Twenty One Pilots to this list. But those who like modern pop music will understand.

Linkin Park eventually moved completely into pop territories with their final record One More Light. Even before that, they always gravitated towards pop-oriented stuff, especially with their vocal melodies and song structures.

These days, a lot of Linkin Park fans are into Twenty One Pilots. Their music often mingles with alternative rock, and you’ll definitely find some interesting stuff there if you’re into Linkin Park.

Stone Sour is the modern version of a classic rock ‘n’ roll band. Their music is a perfect blend of groove, heaviness, and catchy fun-sounding choruses. Fronted by Corey Taylor of Slipknot, they’ve actually been around for quite a while.

Since it’s Corey’s other band, you can notice some similarities to Slipknot. But the music is not as heavy (dare we say extreme?) so it’s more in the territory of Linkin Park. This is yet another band that has an overlapping fanbase with Linkin Park.

At the moment, the band is on an indefinite hiatus, with their future completely uncertain. Nonetheless, they’ve left a solid legacy behind them. On their six studio albums, we can hear a lot of different elements, anything from catchy sing-along stuff up to straight-up thrash/groove metal.

While few bands achieved the same level of success as Linkin Park, there are quite a few groups that have a similar style and sound.

All of the bands like Linkin Park listed above have something in common with them. And since Linkin Park can never again make new music (at least not with the same lineup we all loved so much), the groups listed here are your next best bet.