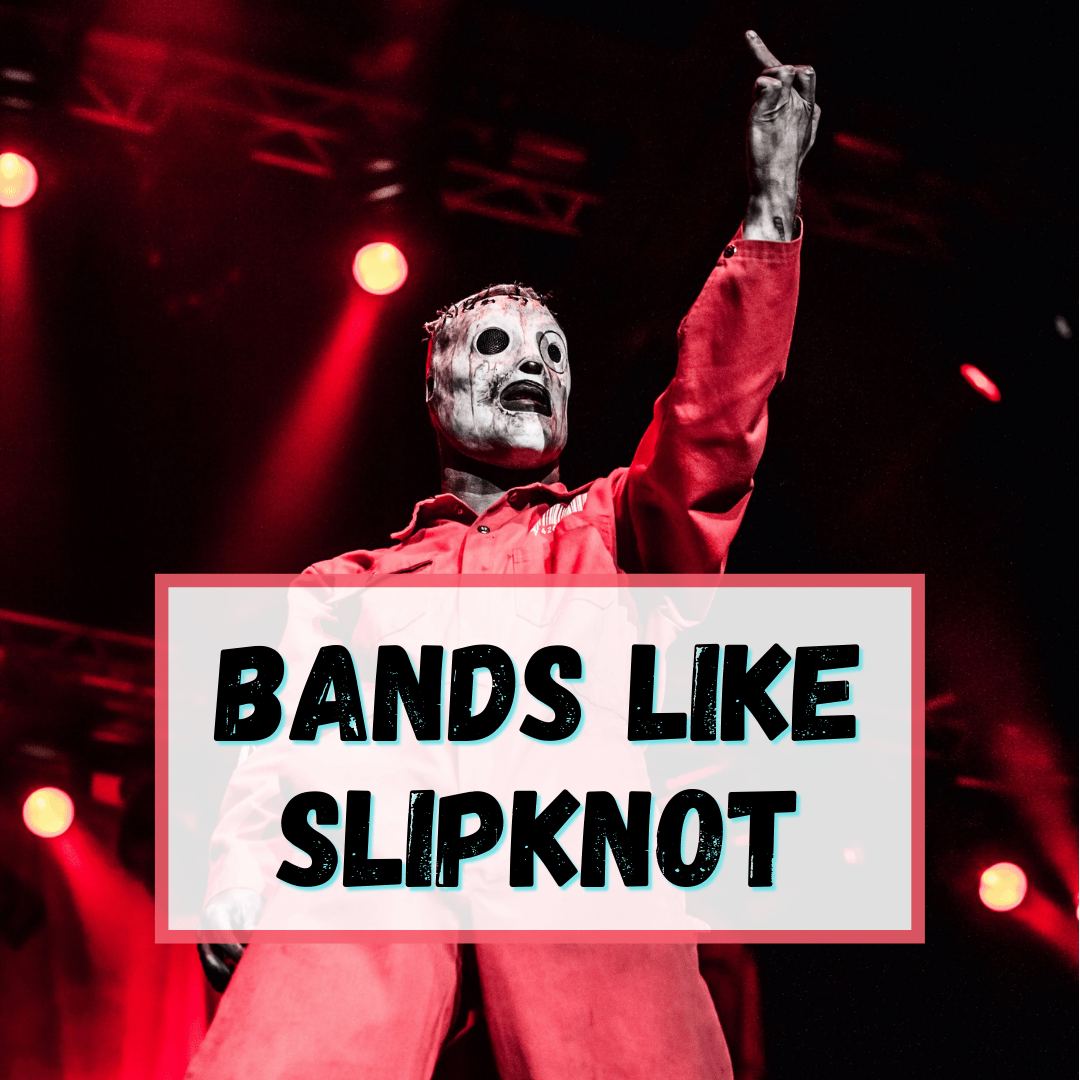 Slipknot is one of a kind.

But there are bands that sound similar. Quite a few, in fact.

If you’re looking to discover some new bands that sound like Slipknot, you have no shortage of options. But most are pretty terrible.

We’ve compiled the best bands like Slipknot below. Most of them either influenced Slipknot, or they were influenced by them. Let’s dive right in and take a look.

If you’re looking for bands like Slipknot, the simplest way is to go back to the beginning of the whole nu metal movement. Korn is usually credited as the band that started it all.

While this is debatable, they’re most certainly one of the most influential metal bands of all time and they are the ones that eventually inspired Slipknot’s early works.

The band Korn was formed back in the early 1990s, featuring Jonathan Davis, James “Munky” Schaffer, Brian “Head” Welch, Reginald “Fieldy” Arvizu, and David Silveria. Today, the group has the same lineup, except for drummer David Silveria, who has been replaced by Ray Luzier.

Korn is one of the groups that popularized extended-range guitars and going into those really deep territories. A lot of their songs are even played in the standard A tuning, making them sound really heavy.

There’s also been some experimentation in their work, like “The Path of Totality” album where there was a noticeable influx of electronic music. But if you want the classic nu metal stuff, then 1998’s Follow the Leader is the way to go.

Another group that’s often synonymous with the nu metal movement is Limp Bizkit. The group was originally formed back in 1994, but it was only with the debut album Three Dollar Bill, Y’all that they finally established their signature style.

A huge part of setting this style was the recruitment of guitarist Wes Borland. Although all the eyes and ears are often on singer Fred Durst, Borland was the true talent.

He was one of the most innovative guitarists of this era, approaching the instrument unlike anyone else. Durst could have been replaced by any annoying frat boy.

There was actually one album with Mike Smith on the guitar, instead of Borland, titled Results May Vary. This album did not go down well with critics.

The classic stuff is on the first three albums, especially Chocolate Starfish and the Hot Dog Flavored Water from 2000. This has all the big songs everyone sings at karaoke.

Another important part of their sound was Leor Dimant, also known as DJ Lethal. However, the inclusion of sampling, turntables, programming, and all that jazz has been met with mixed reactions.

Whatever you think about it, there is no denying it changed metal music forever. We also included this group on our list of bands that sound like Linkin Park.

We considered FFDP for this list as well, but after including Limp Bizkit, we didn’t want another divisive band like Five Finger Death Punch on here. One is enough.

Whatever else you may think of him, Marilyn Manson is one of the most influential musicians from the 1990s. In fact, he’s more than that.

He’s one of the artists who defined this era both sonically and visually. He also had an immense impact on Slipknot with his music and his aesthetics.

Of course, there’s a lot of controversy surrounding Manson as well. He’s certainly an unusual figure, there is no one else quite like him. Manson was one of the pioneers of modern metal.

Although the songs aren’t that technically and rhythmically demanding as some of the Slipknot stuff, there’s a somewhat similar feel to them. That doomy and gloomy vibe and Manson’s lyrical themes – it all sums up in a pretty dark equation.

All of his works are worth checking out, but if you’re completely new to Manson, check out some of his awesome covers first, like Eurhythmics’ Sweet Dreams (Are Made of This), Depeche Mode’s Personal Jesus, or The End by The Doors.

If that’s the case, then the safest way for you to find out new music is to check out Stone Sour. They were formed in 1992 and Corey Taylor was actually a member, before joining Slipknot, where he replaced the original vocalist Anders Colsefni.

Another original member of the band is Jim Root, who joined Slipknot in 1999. However, they only released their first album in 2002.

Stone Sour isn’t as heavy as Slipknot. In fact, they leaning way more toward hard rock and alternative metal. But they do have a very similar groovy feel to their music.

Above all, they’re one of the best live bands of today. Since 2002, they’ve released six studio albums. You can start with pretty much any of them. You’ll definitely dig their stuff, if you’re generally into Slipknot.

Next we have Coal Chamber who take a bit of a darker turn from Stone Sour. This is something that might sit well with fans of Slipknot.

Singer Dez Fafara and guitarist and keyboard player Miguel Rascón were the only constant members throughout the years and all of the band’s incarnations (although drummer Mike Cox has also been present on all of the albums). The band is usually known for vocalist Dez Fafara, who’s also the leader of DevilDriver.

Unfortunately, the band has only four albums. But you can check out pretty much any of them if you’re into Slipknot. None are as hard-hitting and heavy as Slipknot, but there’s still some pretty innovative and dark stuff in there. It’s highly likely that you’ll be into it.

Mudvayne is a story of its own. If you’ve been into metal for a while, there’s a chance you’ve seen their memorable video for Dig.

This was, and remains, their most popular song, in large part due to an unusual intro riff that combines weird-sounding bass and guitar parts. But they’re more than just that.

For instance, bassist Ryan Martinie is one of the most proficient bassists in the world of metal music. And singer Chad Gray is also known for working with Hellyeah, a band that also featured the almighty Vinnie Paul of Pantera.

Although there are some very similar elements, including heavy and groovy riffs and drum parts, Mudvayne is a bit different from Slipknot. This is mostly due to their exploration of more progressive territories.

That said, their debut record L.D. 50, which is mostly straight-up nu metal, is still their most popular work. In fact Shawn Crahan of Slipknot, aka Clown, was the executive producer on this album. You have to check it out.

If you lean more toward classic nu metal from the late 1990s and early 2000s, as well as industrial metal, then we’d recommend New York City-based Dope.

You’ll sometimes see adjectives like “alternative metal” used to describe them, but they have a lot of aggressive-oriented stuff in their music, often tending toward speed metal. You’ll notice a significant influence of industrial metal champions Ministry.

The band started out back in 1997 when it was formed by Brian Charles Ebejer. Known popularly as Edsel Dope, the singer, guitarist, and eventually, keyboardist has been the sole permanent member of the band and their main creative force.

Aside from him, lead guitarist Andre Michel Karkos, popularly known as Virus, has been present on almost all of the band’s recordings.

Dope is another band that you can safely check out if you’re into Slipknot. They’re heavy, they’re mean, and their music is unapologetic. Just straight up nu metal.

The metal-loving kids who grew up in the late 1990s and the early 2000s are as fond of the band Avenged Sevenfold as they are of Slipknot. In fact, this is one of the biggest rock and metal bands to come out of this particular era.

Their style is be a bit different. They have also veered into classic metal and hard rock on some of their albums. They’ve even explored progressive territories on the 2016 album The Stage.

However, you can always notice the influence of nu metal and early metalcore music in all of their work, making them a perfect addition to this list.

As for the albums and songs on that you should check out first, we’d recommend City of Evil, Waking the Fallen, or the 2007 self-titled album if, you lean more toward classic metal.

The debut record Sounding the Seventh Trumpet isn’t bad either, although it’s far less coherent and mature than the later stuff they’ve put out.

If you don’t know, there’s actually been some beefing between Mushroomhead and Slipknot. This comes from Slipknot’s earliest days, because Mushroomhead have claimed that Slipknot ripped them off.

We can’t blame them. Mushroomhead started in the early 1990s, had very similar types of masks, and has played a combination of industrial and nu metal music for quite a while. They also had more band members than usual.

Although fans of either band are really defensive, you’ll definitely love Mushroomhead if you’re into Slipknot. Just don’t get too involved with belonging to one of these two camps and enjoy both of their music as it is.

I’m sure you’re already familiar with some of these bands. Perhaps even all of them. If so, do you agree that they are similar to Slipknot and will appeal to fans of Slipknot? Feel free to let us know in the comments below.

Please also let us know if you know of and bands we left off this list, that you think should have had a place on it. We’ll be sure to check them out and possibly even add them to the article.

Do you also like Tool and Pink Floyd? If so, check out our lists of bands similar to Pink Floyd and groups like Tool.