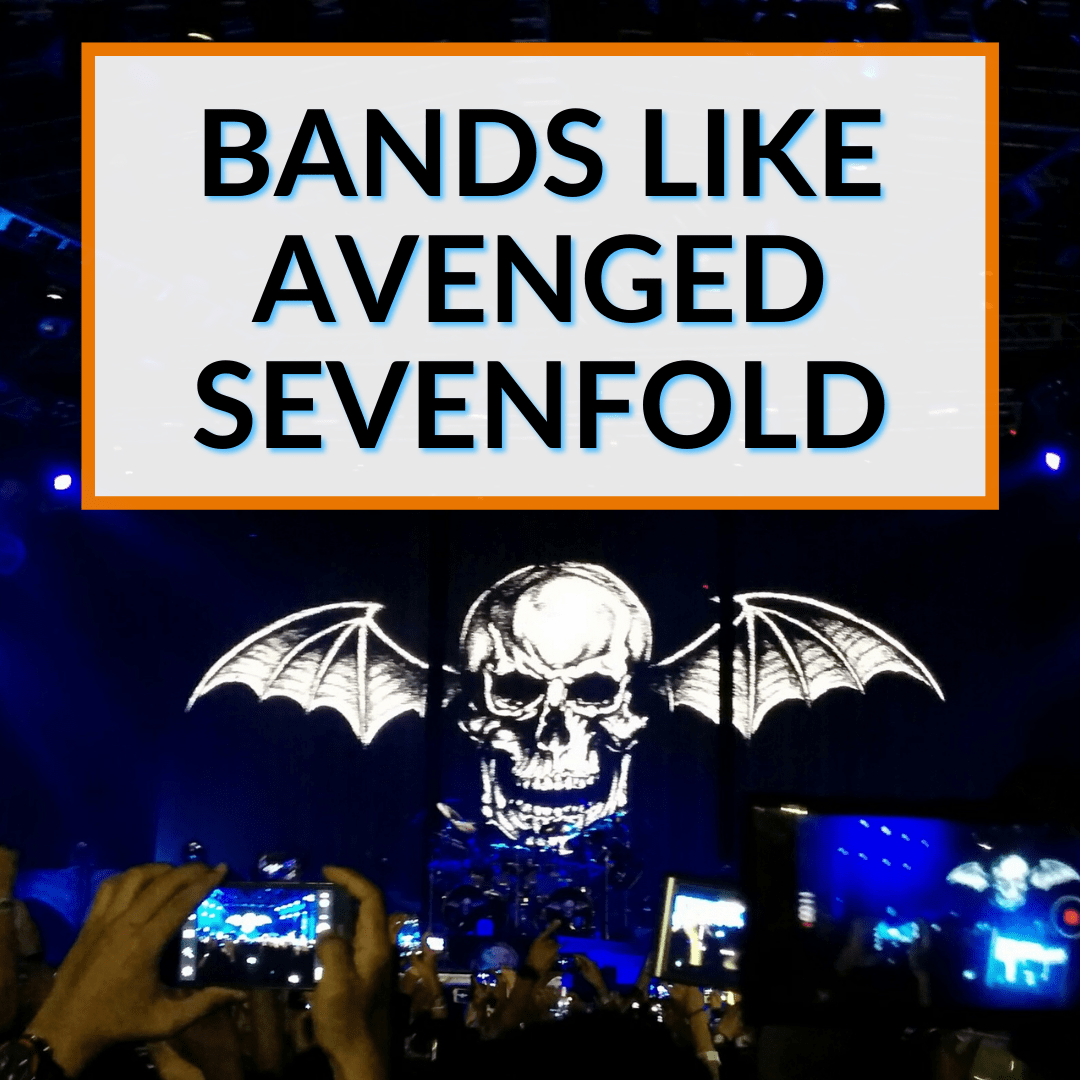 Avenged Sevenfold is one of the most successful and prolific metal bands of the last 20 years.

It should come as no surprise that there are tons of bands like Avenged Sevenfold out there.

When something is successful, others will copy it.

But we didn’t want to just include the copycats on this list.

We wanted a list that includes some of A7X’s influences, as well as the best of the bands they influenced. We also wanted a few somewhat different choices.

Keep reading for our full list of groups that are similar to Avenged Sevenfold.

Since the mid-2000s, Matt Heafy has been keeping the metal scene fresh. With his band Trivium, he’s released an abundance of music, shifting through different subgenres of metal as the years went by.

Comparable to Avenged Sevenfold, Trivium’s early stuff went more into the metalcore style, which was popular in the 2000s. Later on, Heafy experimented with some of the more conventional metal styles, all while bringing in his own twist to the music.

At this point, Trivium is one of the few bands that is carrying on the legacy of the old legends.

If you’re into Avenged Sevenfold, there’s a lot of stuff that you’ll like about Trivium. Heavy riffs, aggressive drum grooves, scorching lead sections, and a mix of growling and regular vocals – Trivium has it all.

Bullet For My Valentine

Starting their work in the late 1990s, Bullet for My Valentine explored different aspects of metalcore music. The band is also mostly remembered for frontman Matt Tuck, although a lot of their music was written by guitarist Michael Paget.

While there are similarities to Avenged Sevenfold, there’s always been this catchy melodic aspect to Bullet for My Valentine.

In a way, we could say that there’s some pop influence in there, similar to the emo and emo hardcore bands of the 1990s and the 2000s. The band’s later material, like the 2016 album Gravity, saw them going more into a synth-driven and pop-oriented direction.

It’s impossible not to mention one of the biggest influences on Synyster Gates and the rest. While Metallica now belongs to the older generation of bands, there are certainly a lot of similarities between these two bands.

If you’ve focused most of your attention on 21st-century metal bands, like A7X, then we’d definitely advise you to broaden your horizons with classic bands like Metallica.

Formed back in the early 1980s and led by Lars Ulrich and James Hetfield since the very beginning, Metallica changed the musical landscape of the 1980s. They were pretty heavy for their times.

However, their music was somehow so appealing that they became superstars in a matter of years. Their self-titled album, also known as The Black Album, is the easiest way to start.

If you want something raw, then go with the first two albums: Kill ‘Em All and Ride the Lightning. But overall, their most respected album remains 1986’s Master of Puppets.

Although Stone Sour is usually known as Corey Taylor’s side project, he was actually a member of Stone Sour before he joined Slipknot. But they did not release any music until the early 2000s.

If we were to give them a specific genre label, then it’s a mix of classic heavy metal and hard rock. Their stuff is not too complex, but their songs are written and arranged in a way to make entire stadiums sing.

Additionally, if you’re familiar with the band Slipknot, you should also know that guitarist Jim Root was a member of Stone Sour for a while, too.

Stone Sour’s stuff is really easy to get into. If you like Avenged Sevenfold but are looking for a more laidback metal band with catchy songs, then Stone Sour is a great choice.

While we’re at it, Slipknot is an unavoidable mention here. The band’s first two albums, the self-titled one and Iowa, may be a bit heavier than Avenged Sevenfold.

But as time went by, they explored other styles as well. That said, 2001’s Iowa still remains their pivotal work, something that both the band and the fans look up to even to this day.

Their later material combines different elements, and there’s even some softer acoustic stuff in their catalog as well. All of their albums are worth giving a go.

They haven’t released much material since 1999, but they also focused on making great music with no fillers. All Hope Is Gone can be a great way to get started on them, as well as 2019’s We Are Not Your Kind. But if you want the most brutal stuff, then try Iowa.

Atreyu is a bit of a different band. Sure, we’re still talking about the good stuff, the kind of metal music that you’ll like. But they also do a lot of catchy sing-alongs and groovy kind of stuff that’s really easy to get into.

Coming from California, the band formed in the late 1990s. Just like a lot of young bands back then, they explored the increasingly popular metalcore style.

There’s a great deal of stuff worth checking out in their body of work. At this point, two original members remain in the band: lead guitarist Dan Jacobs and vocalist and multi-instrumentalist Brandon Saller.

Five Finger Death Punch is one of the most divisive bands in metal music. In fact, a lot of people will probably hate seeing them on this list.

Nonetheless, the band has some real metal bangers to offer. There are some parallels that we can draw between Avenged Sevenfold and Five Finger Death Punch. However, FFDP goes more into the groove metal category. This is also accompanied by an in-your-face kind of production.

The band has been around since 2005, right around the time of nu metal’s peak. For all these years, the band was led by rhythm guitarist Zoltan Bathory. Their music is pretty easy to get into, but we’d recommend that you start with the early material first.

Another group formed in the late 1990s, All That Remains is an example of a perfect marriage between classic and modern metal music. Throughout their career, they were led by singer Philip Labonte and guitarist Oli Herbert.

This was until Herbert’s tragic passing in 2018, with Labonte remaining as the sole original member at the moment. The lead guitar duties are now taken by modern virtuoso Jason Richardson.

Just like most of the bands that formed around that time, All That Remains started as a metalcore group. However, similar to Avenged Sevenfold, they’ve evolved and adopted a more conventional metal style over the years.

Although they go more into the emo direction, Black Veil Brides is a band worth checking out if you’re a fan of Avenged Sevenfold. At this point, vocalist Andy Biersack remains the sole original member of the group and the musician for whom Black Veil Brides are known the most.

Releasing their debut album in 2010, they were a straight-up metalcore band at first. However, it took one album to completely reinvent their style and go into glam metal.

If you like Avenged Sevenfold’s classic metal-oriented stuff, then there’s a high chance that you’ll like Black Veil Brides too. Their debut album Stitch These Wounds is a good place to start. It is essentially metalcore.

If you’re more into Avenged Sevenfold’s metalcore stuff, then we’d also recommend Asking Alexandria. As expected from a band that started in the late 1990s to early 2000s, they have changed styles over the years.

Their 2009 debut album Stand Up and Scream will sit well with all classic metalcore fans. As time went by, they began adding some electronic elements to their music. In fact, one of their releases called Stepped Up and Scratched is a full-blown remix album of their previous works.

At this point, they’ve shifted to a hard rock-focused band, even featuring some pop elements. But you can still hear their classic signature style in there.

On the other hand we have Killswitch Engage, one of those metalcore bands that never shifted towards hard rock or classic metal. Their music is not as catchy and melodic as some of the other bands mentioned here.

Everything from their 2000 self-titled debut album up to now features some pretty heavy stuff. Their fans usually divide their work into two eras, one where Jesse Leach was the vocalist, and the other one where Howard Jones handled these duties.

The members have also proven to be very proficient musicians. For instance, the original drummer Adam Dutkiewicz is currently taking the position of lead guitarist.

Additionally, they’ve done a really good job at writing their own music and covering classic stuff as well. If you want to get into them, we’d recommend going with the cover of Dio’s legendary Holy Diver.

Lastly, we’d like to mention As I Lay Dying as another straight-up metalcore band that stayed true to their original style. If you’re into heavy stuff and don’t want to deal with the occasional catchy pop-inspired parts, then ALID is what you’re looking for.

We’ll take a somewhat wild approach here and recommend you start with their 2019 comeback album Shaped by Fire. Just straight-up heavy riffs, blasting drum beats, and metalcore vocals. What more could you ask for? And if you like them, check out the band Bring Me The Horizon.

If you’re a fan of A7X and you’ve been looking for new music to enjoy, we hope this list gave you some new bands to explore. What do you think of our recommendations?

Do you agree that these are the best bands like Avenged Sevenfold? Or are there some other bands you think we should have included (if you wanted to see symphonic metal bands like Nightwish, we have a separate article for that). Please let us know in the comments below.