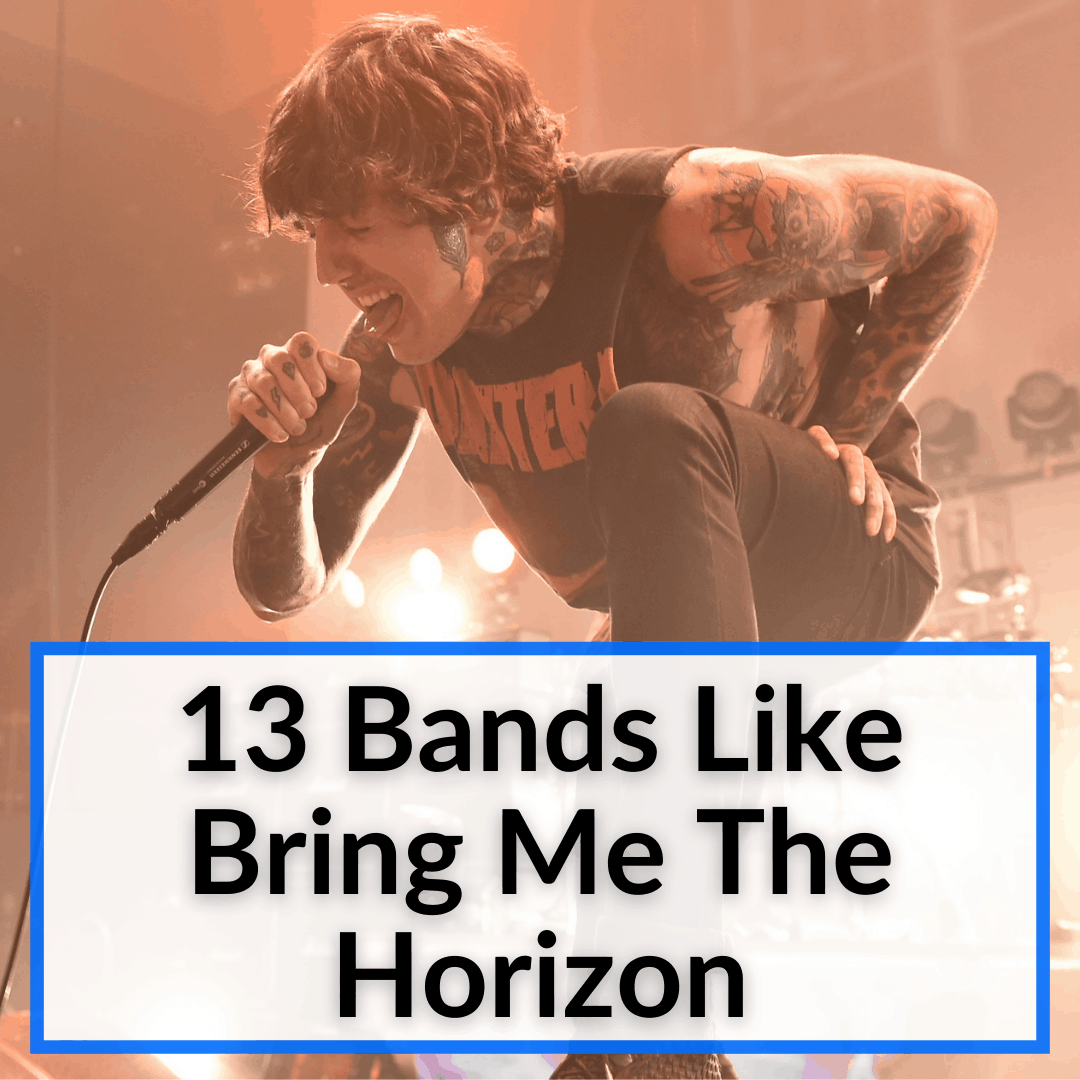 Bring Me The Horizon were quite the controversial band when they first started.

They’ve toned it down a lot, but still seem to attract some controversy for things like trashing Coldplay’s table at a concert.

It is things like that, along with their tendency to change styles, that make it more difficult to find other bands like Bring Me The Horizon.

Keep reading for 13 great bands that are similar to BMTH. We’re sure you’ll enjoy at least some of them.

A British band coming from York, Asking Alexandria has been present on the scene since 2006. Although there have been bands defined as metalcore before them, they’re still one of the most influential groups in the genre. In fact, Asking Alexandria is responsible for taking the genre into some new territories.

They released their first album Stand Up and Scream back in 2009, attracting attention of metalcore fans. Slowly but surely, they began getting more traction, eventually releasing five more albums up to 2020.

As time went by, they shifted their style towards hard rock, and even some pop rock. This is a very similar approach to what Bring Me The Horizon did.

Coming from Richmond, Virginia, Bad Omens is a younger metalcore band. Starting their work in 2015, they had some minor lineup changes and are now working as a standard quartet.

Sure, they haven’t been around for that long, releasing only two full-length studio albums so far. But if you like stuff in the vein of Bring Me the Horizon, especially their older stuff, you’ll definitely love Bad Omens. We certainly hope that they’ll release new stuff in the coming years.

Of course, you can’t expect to have this list of metalcore bands without at least one of them coming from Florida. Up next, we’re bringing Wage War: a band that originally started as Empires back in 2010.

After some changes in the lineup, they changed their name and finally released their debut studio album Blueprints in 2015.

Although certainly not as big as Bring Me the Horizon, they bring classic old-school metalcore with a modern twist. Their stuff is immensely heavy and without compromise.

They also have dual lead vocals, with Briton Bond handling the growling stuff, and guitarist Cody Quistad doing all the clean stuff. We have an article on how to scream sing for beginners, if you’d like to see what it takes to sing like Briton Bond,

Ice Nine Kills is often described as just a heavy metal band. However, we can certainly notice some metalcore in there, as well as some similarities with Bring Me the Horizon.

The band is actually older than BMTH, starting their work back in 2000. Interestingly enough, they originally started as just Ice Nine and they played ska punk. Their old ska punk demo from 2002 was eventually released in 2009.

However, in 2006, they finally released their debut record Last Chance to Make Amends. At this point, they still kept most of the ska punk elements. It took four years after this record for them to release a full-on metalcore and post-hardcore album, titled Safe Is Just a Shadow.

After that, albums just kept lining up. They changed their style again over the years, although they never went back to the old ska punk stuff again.

Knowing that California is home to various different rock, punk, metal, and hardcore bands, it’s not a surprise to have a Californian band on this list as well. Of Mice & Men, also known as OM&M, is now one of the most important groups of this movement.

They started their work right after vocalist Austin Carlile left the (in)famous band Attack Attack! in 2009. Teaming up with bassist Jaxin Hall, they finally got a full lineup and released the self-titled debut album in 2010.

Interestingly enough, neither Carlile nor Hall are in the band anymore. Nonetheless, they still exist under this name, and they still write some pretty awesome metalcore stuff.

At this point, there are a total of six full-length studio albums and two EPs under the Of Mice & Men moniker. OM&M is also included on our list of bands like A Day To Remember.

Britain has an abundance of great metalcore bands, in addition to Bring Me the Horizon and Asking Alexandria. The Architects are one of the most important collectives in this genre, fusing classic hardcore and metalcore with progressive metal.

While there are some parallels we can draw between them and Bring Me the Horizon, the Architects are a very unique band. You won’t find anyone quite like them. Formed in 2004, they also explored the so-called “mathcore” style.

Drummer Dan Searle is technically the only original member at this point, with the band going through several lineup changes since their formation in 2004. Nonetheless, you can always recognize their style.

If you’re up for some metalcore with a progressive rock twist, you have nine albums and one split EP worth of material.

Formed in 2002, Suicide Silence is one of the most important names in the metalcore movement. The band initially became known for their vocalist Mitch Lucker, who recorded the first three albums.

Unfortunately, Lucker passed away after a tragic motorcycle accident in 2012. Lead vocal duties are now taken by Eddie Hermida who has been with the band since 2013.

Metalcore fans love both of these eras. The only album that caused some mixed reactions was 2017’s self-titled one. But even that one is worth checking out if you’re into Bring Me the Horizon.

Another very important name in the world of metalcore is As I Lay Dying. As you may or may not know, the singer and the group’s leader Tim Lambesis is a controversial figure. But if we were to look into their music, they are one of the most impactful bands of the genre.

Although metalcore, you can notice some obvious thrash metal and death metal elements as well. Sure, they’re not completely like Bring Me the Horizon, but we can compare As I Lay Dying’s stuff to BMTH’s older material.

They regrouped in 2018, releasing a new album about a year later. Honestly, wherever you start, be it with their older or newer stuff, you can’t really go wrong with As I Lay Dying.

If you’re up for some classic British metalcore, then you should definitely check out While She Sleeps. Coming from Sheffield, the group has been active since 2006, delivering a total of five albums between 2012 and today.

They only had one lineup change, and it was before the release of the debut album. From 2009 onwards, they kept the same stable 5-piece formation.

Their style gravitates more towards hardcore punk, with some metal elements in there. That’s why we’d recommend While She Sleeps to anyone who is more into Bring Me The Horizon’s older stuff.

There have been many different ways to describe Motionless in White and their music over the years. We can also put them into the metalcore category, although they’re quite versatile in their approach to songwriting.

Essentially, this is Chris Cerulli’s band, as he remains the only constant member over the years, as well as their creative leader.

Nonetheless, there’s a lot of stuff that influenced the band and their music, ranging from gothic rock to industrial metal and metalcore. There are a total of five albums in their catalog and we’d advise you to start from the beginning.

If you’re a fan of Bring Me the Horizon, we can confidently say that Sleeping with Sirens will be really easy to get into. Coming from Florida, they have been open to experimenting with classic rock and even pop rock.

Just like Bring Me the Horizon, they’re not strictly a metalcore band. Sure, their earliest stuff is a mixture of post-hardcore, emo, and metalcore stuff. But as time went by, they slowly gravitated towards other styles as well.

In fact, an album like 2017’s Gossip is a full-on pop punk record. On the other hand, they returned to their older style on 2019’s How It Feels to Be Lost. Either way, you have a lot of stuff to choose from.

Then we also have a band like Falling in Reverse. They’re also more in the vein of pop punk, and they’ve even experimented with some hip hop on some of their material.

Similar to what we had with the previous band, Sleeping with Sirens, we’d recommend Falling in Reverse to those who enjoy a more versatile approach to metalcore. You can go with any of their albums as we’re sure you’ll like them all.

Another band in this style is Pierce the Veil. Coming from California, they too fall into the post-hardcore category, experimenting with pop punk and emo stuff as well

But Pierce the Veil have some progressive rock elements as well, which makes them an interesting addition to this list.

From their beginnings in 2006 to now, they’ve released a total of four albums. And honestly, they’re one of those rare bands that didn’t blow out all of their good stuff in the beginning. They’re only getting better with time, which is what their commercial and chart success also proves.

If you’re a fan of Bring Me The Horizon, we’re sure you’ll like most, if not all, of the bands listed above. Naturally, we included quite a few other British groups, but our choices were certainly not limited to artists from across the pond.

What do you think of the list? Do you agree with all of our selections, or do you feel some simply don’t belong here? Are there any other bands like Bring Me The Horizon you feel we overlooked? Please let us know in the comments below.