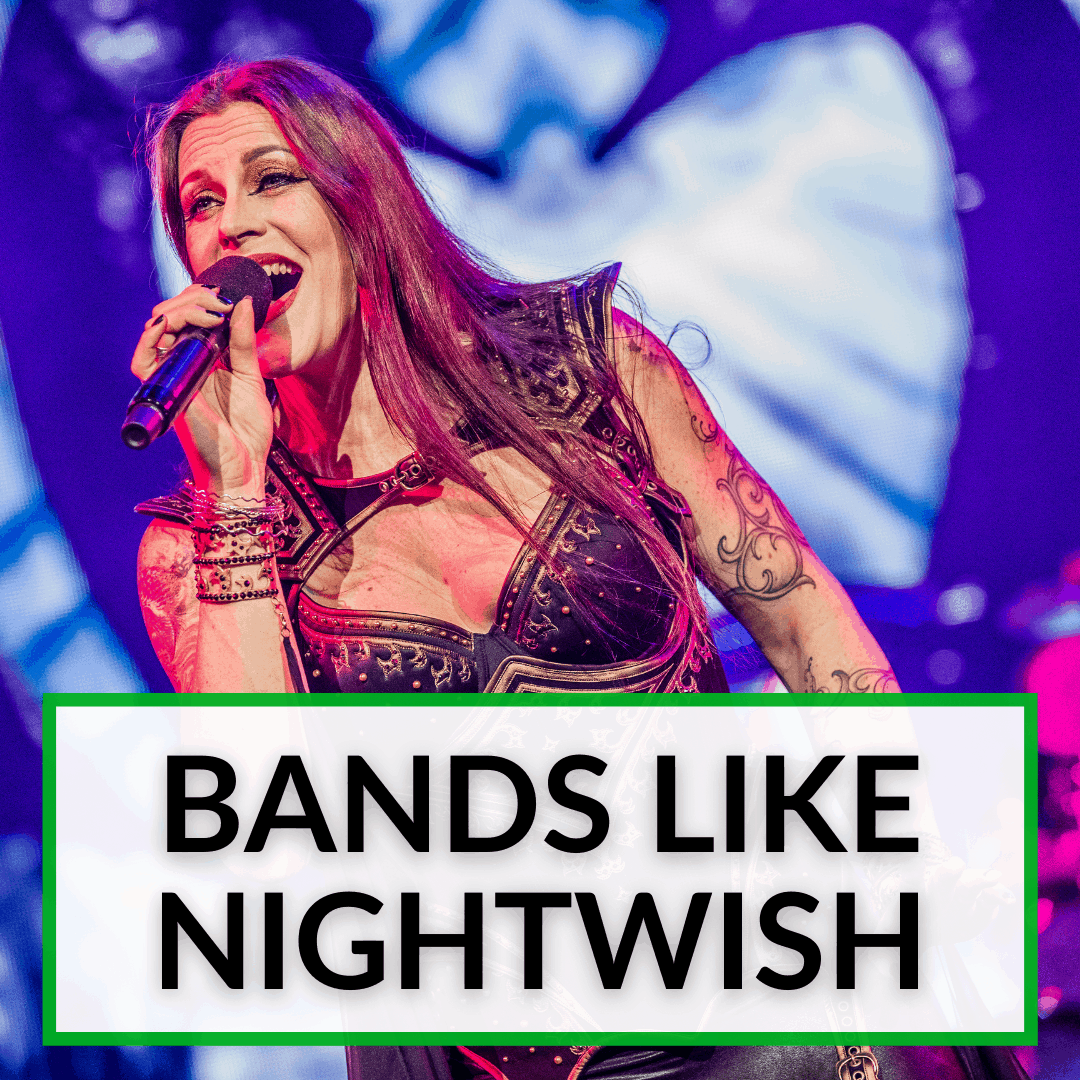 Nightwish is the most successful Finnish band worldwide.

They were inducted into the Finnish Music Hall of Fame in 2018.

They are also one of the biggest names in symphonic metal.

But that doesn’t mean there aren’t plenty of similar bands out there.

And no, our list of bands like Nightwish is not just a collection of heavy groups with female lead singers.

Sure, some of the bands listed below fit that description, but many others do not.

The one thing they all have in common is similarities to Nightwish and an overlapping fan base.

Coming from the Netherlands, Delain is a very interesting band, combining symphonic metal with some of the more modern metal elements. Of course, they also feature a female vocalist.

The first vocalist was Anne Invernizzi, although that initial lineup broke up after about a year. From 2005 to 2021, Delain’s style was mostly defined by Charlotte Wessels and her unique voice.

Although keyboardist Martijn Westerholt is the band’s leader and the principal songwriter, it was Charlotte for whom everyone remembered Delain.

Unfortunately, the band’s lineup dissolved in 2021 and their future is uncertain. Nonetheless, they’ve left a huge mark in the world of symphonic metal and you’ll definitely enjoy their stuff if you’re into Nightwish.

Another Dutch band, we have Epica as a great example of a group that’s similar in style to Nightwish. Active since 2002, they first started with Helena Iren Michaelsen on vocals, who was replaced by the very talented Simone Simons not long after the band’s formation.

Thanks to her voice and impeccable performances on every record, they’ve cemented their place as one of the most important bands of the symphonic metal subgenre.

But, of course, we shouldn’t forget original constant members, guitarist Mark Jansen and keyboard player Coen Janssen, who kept the band going throughout the years.

If you like Nightwish, Epica will be really easy to get into. You can pretty much start with any of their albums.

Fusing the European innovativeness and American metal fury, Kamelot pushed the boundaries of the then newly-formed genre of power metal. At this point, they have 12 full-length studio albums, all filled with some of the best music of the genre.

From the band’s formation in 1987 until now, Kamelot has been led by guitarist Thomas Youngblood. He is not only the sole constant original member but has also been the main creative force behind the band.

Sure, the band’s lineup has changed, and their style shifted. But you can always notice their unique style and sheer power. Kamelot a must for every power metal and symphonic metal lover.

Coming from Germany, Gamma Ray are the real deal. Formed by Kai Hansen in 1989 after his much-debated departure from the legendary Helloween, they pushed the boundaries of this new style of music, delivering some new elements into this world.

Throughout most of their career, Kai Hansen has played guitar and provided lead vocals. Of course, there’s also the early era with Ralf Scheepers on vocals, which included the first three albums. And from 2015 and onwards, all the vocal duties are now taken by Frank Beck.

Although they’ve certainly evolved over the years, you can always easily notice Gamma Ray’s unique style. If you’re up for some straight-up power metal, you won’t go wrong with them.

Once again, we’re bringing a Dutch band to the list. After Forever is one of those groups that combines operatic female vocals with aggressive growling.

The band formed back in 1995, with Mark Jansen, later known as the leader of Epica, doing all the guitar and vocal duties. Although Mark remains the creative leader, they also added vocalist Floor Jansen and began releasing albums.

Unfortunately, the band only lasted until 2009. They had five pretty solid albums. And, as you may already know, Floor Jansen later joined Nightwish. So if you’re into the Floor Jansen era of the band, you’ll definitely like After Forever.

Although not as commercially big as some of the other bands on this list, Xandria have been delivering some awesome quality symphonic and power metal since the mid-1990s.

Throughout the years, guitarist and keyboard player Marco Heubaum remains the band’s leader and the only constant original member.

There are seven albums in their collection. And, to be fair, it’s all worth checking out. It’s kind of a shame that they haven’t achieved the commercial success of some of the other power and symphonic metal bands, but they’re certainly not a band that you’ll want to miss out on.

Amaranthe is a band that took a bit of a different approach, ultimately achieving great success in the world of symphonic and power metal subgenres. They basically have it all – clean female vocals, clean male vocals, growling male vocals, a standard instrumental formation, and a diversity of styles that they cover.

Of course, if you’re a fan of a band like Nightwish, we can safely assume that you love all of their aspects. Amaranthe has a lot of territories covered, even combining metalcore with dance rock stuff. Yes, they’re more of a “pop-metal” band if you will, but they’re most definitely worth checking out.

Now we get to the true old epic power and symphonic metal. Blind Guardian are often considered the pioneers of these subgenres, and rightfully so.

They started their work back in 1984 and kept pushing through all of the musical changes on the market, all while staying true to their own unique style.

Since their formation, only two constant members remain: bassist and vocalist Hansi Kürsch and lead guitarist André Olbrich. Their creative vision can be noticed on all of the band’s records, starting with 1988’s Battalions of Fear, all the way to 2019’s Legacy of the Dark Lands.

If you’ve just gotten into power and symphonic metal and don’t know what else to check out, Blind Guardian is not only a safe bet, but a must, if you want to know more about this kind of music.

Another Dutch band on the list, Within Temptation makes some pretty catchy metal music and is really easy to get into. In fact, fans of genres other than metal are also very fond of them.

Their lineup changed a lot over the years, but vocalist Sharon den Adel, bassist Jeroen van Veen, and guitarist and vocalist Robert Westerholt remain the core of the group. Although they started off as a full-on doom gothic metal group, they eventually changed, bringing more variety into the equation.

Sure, we can discuss how to label their musical styles, but let’s not forget their material. From 1997 to now, they’ve released seven full-length studio albums, all filled with awesome material. You can start with pretty much anything and you won’t regret it.

If we’re talking about the power metal subgenre, DragonForce is a band that you just cannot go without. They’re fast, they’re extremely energetic, and they deliver some of the most intricate guitar parts you’ll hear in metal music.

If you’re predominantly into guitar-driven stuff, you’ll enjoy Herman Li and Sam Totman doing their thing on all of the band’s albums. Their guitar solos are impossible.

While we’re at it, there’s a total of eight DragonForce albums, all filled with some pretty crazy power metal stuff.

The most famous of the band’s pieces is Through the Fire and Flames from the 2006 album Inhuman Rampage. Just make sure to listen to the entire version that’s over seven minutes long and not the five-minute radio edit.

Theiron is, by far, one of the strongest bands on the metal scene. They started way back in the late 1980s as a full-on death metal band. You know, the brutal kind that’s not set for major success.

But as the mid-1990s came, they started adding in symphonic elements. And with 1996’s album Theli, they finally defined their style and incorporated choirs and other more unconventional instruments.

More exciting albums kept lining in, like Vovin and Deggial. And the only constant member since the very beginning remains Christofer Johnsson, the creative mastermind behind Therion. Aside from guitar work, he does other instruments and orchestral arrangements.

More in the vein of those classic straight-up power metal bands, Sonata Arctica are responsible for further shaping the genre throughout the 1990s and the 2000s. They even influenced one of the biggest Japanese bands we included in our rundown of Babymetal-like bands.

No matter how you define their music, there’s a lot of surprisingly catchy stuff in there for a metal band.

Be that as it may, Sonata Arctica is a band often adored by fans of Nightwish. Therefore, we’d recommend that you give them a try.

HammerFall gravitates more towards the conventional classic heavy metal band rather than a power metal band. Nonetheless, their music has been capturing the hearts of metal fans worldwide.

Led by guitarist Oscar Dronjak, they’ve released eleven studio albums so far. You can’t go wrong with any of their records. But if you want an easy way into HammerFall’s music, we recommend Hearts on Fire, a metal song that landed on Sweden’s popular charts.

The bands listed above are our favorites among the bands with similarities to Nightwish. All are excellent and any fan of Nightwish is sure to like at least some of them. And probably all.

You can also check out our article listing bands like Evanescence. There tends to be a lot of overlap in the fan bases of that band and this one.

What do you think of this list? Do all of the groups we included belong? Are there any other bands like Nightwish you think we missed? Feel free to let us know in the comments below.