Getting an entire choir to warm up together is not always easy.

Most singers will want to warm-up on their own and this should not necessarily be discouraged.

But warming up together as a group, in addition to any individual warm-up exercises, is highly beneficial.

When creating a warm-up routine for a choir, it is important to allow the expressive, free voice to come out.

Generally, a healthy voice will emerge naturally and it is best to stay out of the way and let that sound emerge.

My experience with the exercises below is that they address the dictum: do no harm. The sound that I hear from this vocal procedure is clear, in tune, free, and pleasing. Singers are encouraged to sing individually with a sensitivity to the group sound.

When warming up your choir, start with the body as a whole, then move on the the breath, the nose and the vocal chords.

Warm Up The Body Before anything else, you need to prepare the body for singing. The following exercises accomplish this.

These exercises are several from the many effective exercises that singers can do to ready the body for singing.

They generally work well in close quarters and are designed to bring a state of readiness to the body with special attention to relaxing muscles in the neck which attach to the laryngeal cartilages. Freedom and readiness are the issues: free the voice and ready the body.

Prepare The Breath For Singing Once the body is alert and has been energized through physical warm-up exercise, it is time to wake up the breath. These following exercises are effective at doing so.

(These exercises come from the Ehmann/Haasemann book listed below.)

The intent of these vocalizes is “vocal-ease.” Breath flow needs to be uninhibited and immediately connected to the sound.

The Italian concept of appoggio is roughly translated as “support,” but appoggio is much more: a dynamic balance of abdominal and thoracic muscle movement, coordinated with vocal onset (phonation), which allows cooperative (antagonistic) coordination among the muscles. Its features are:

Prepare The Nose for Singing Now that the body is ready and energized for singing and the breath has been vitalized, it is time to prepare the nose.

The Italian maxim goes something like this: “Put some nose in the sound without the sound being in the nose.” Virtually everyone agrees that, in the bel canto style, nasal singing is avoided. The converse is also true: “cut-off nasality” is to be avoided.

Nasal sound has a twang that is generally out of place in classical singing. On the other hand, the sound of “cut-off nasality” is dull and monochromatic, flat (not in pitch but in resonance). In a balanced voice there is some nose in the sound, but the sound is not nasal.

A good test is to sing and pinch the nostrils. If the sound doesn’t change at all, there is no nasality in the sound: it has “cut-off” nasality. If the sound changes a lot, there is a nasal twang: it has too much nasality.

If the sound changes slightly, then the balance is probably right. This is a tricky concept to teach. Studio voice teachers use a variety of techniques to get the right mix of nasality in the voice.

In a choral setting I have found that the best way to “wake up the nose” is through a humming vocalize. Ask the singers to bring the lips gently together as if humming [m]. Place the tip of the tongue easily behind the upper teeth as if singing [n].

Hum using this combination of [m] and [n]. Experiment in mid-range with random humming sounds, single pitches and gentle glissandos. Use the humming “puppy whine” in upper register as a means of developing nasal placement and as a technique to connect with head register.

Once singers are comfortable with humming, introduce this vocalize: 5-3-4-2-1 (sol-mi-fa-re-do) in major mode and in a comfortable mid-voice range. Hum the first four pitches and sustain the final pitch on the vowel [a]. Repeat several times a half step lower each time, but remaining in a comfortable range.

Another useful vocalize on the same pitch pattern (sol-mi-fa-re-do) or a more extended pattern (sol/mi – fa/re – mi/do – re/ti – do) is [ni-ne-na-no-nu] sung while doing gentle circular gestures with your hands in front of the body as if lovingly stroking a cat.

Warm Up The Voice

Once you have animated the body, initiated consistent breath flow, easily connected breath to sound and energized the nasal placement, it is time to extend the range of the vocalizes to awaken the full range of the voice.

There are numerous vocalizes that effectively achieve the goal of vocal extension. The two that I use most frequently with choirs are these: 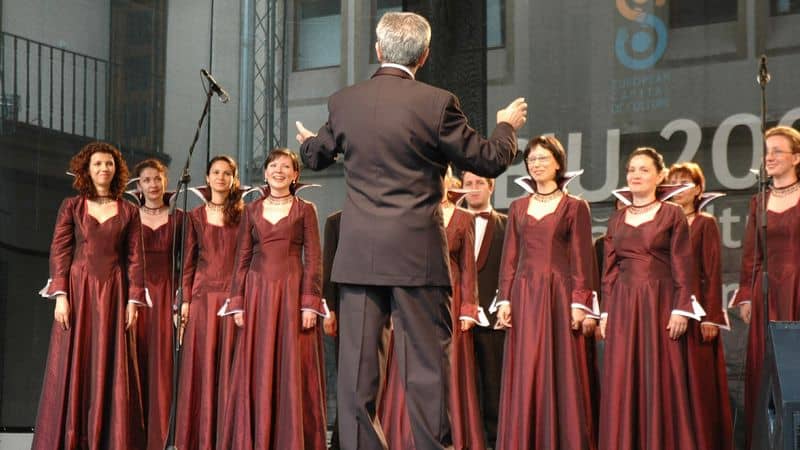 Once you have animated the body, initiated consistent breath flow easily connected to sound, energized the nasal placement and extended the range of the vocalizes to awaken the full voice, it is time to focus on vocal beauty. Notice the order: vocal beauty is the last important vocal component to be addressed.

The exercise that I use most often for beauty of sustained singing is a single pitch in mid-voice, first hummed pianissimo and then sung with gradual crescendo on a succession of vowels that grows increasingly brighter: [u – o – a].

If the vowel is truly unified, somewhere in the [a] an overtone (or sometimes two) emerges as a result of the vowel unification. When this happens, the choir is truly singing in tune.

For optimum sound, think in this order:

For optimum resonance, encourage the following:

For beautiful sound and optimum resonance, use the following:

Doing all of these exercises every day will probably require 10-15 minutes and you may not have that much time in rehearsal. I generally use a 20-25% rule of thumb for vocal warm-up and sight-singing exercises. If your rehearsal is 50 minutes, take no less than 10 minutes for vocal and musical exercises.

Find a plan that works for you and stick with it. Slight variations from day to day are good, but in general keep the routine the same; in the long run that will produce the most consistent results.

Research has demonstrated the value of singing every day. The vocal exercise does not have to be complex: easy humming in the shower or simple scalar passages in the car on the way to work are effective; certainly more extensive vocalizing is needed for more rigorous singing. The benefit of humming is holistic: somehow we feel more integrated and grounded.

Characteristics Of A Good Choir Voice 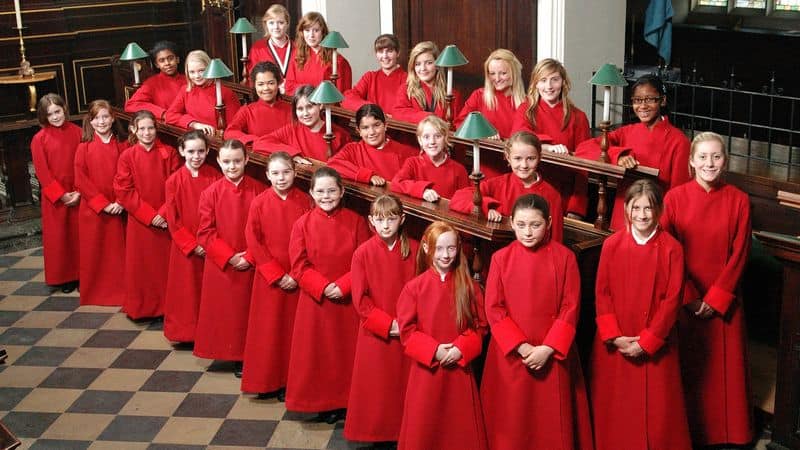 Much debate among singers, singing teachers, and choral conductors has centered on the topic of vibrato. I believe it is possible for good choral union and vibrato to peacefully coexist (consult recordings of The Robert Shaw Chorale or the Swedish Radio Choir with Eric Ericson conducting as examples).

Straight-tone singing to the point of “laser-like” vocal production (as I have heard in some choirs) is unhealthy and unpleasant. Likewise, a vocal free-for-all in which singers are allowed to do anything and everything with vibrato does not yield the most satisfactory choral sound.

A Note About Blend

A chorus learns to sing together to the extent that members of the chorus have developed unified concepts of pitch, vowel, diction, rhythm, articulation, dynamics, balance and timbre. In rehearsal I encourage all singers to:

Some Principles Of Vocal Training

If you feel that the choir is singing with a generally healthy sound, but intonation is still a problem, try simplifying the musical demands according to the suggested order above.

This was a heavy article. Probably the heaviest on this site. But we wanted to give you the most comprehensive article on choir exercises possible.

Even if there are far too many exercises here for your particular situation, we hop you at least find a few useful warm ups, etc. among them.