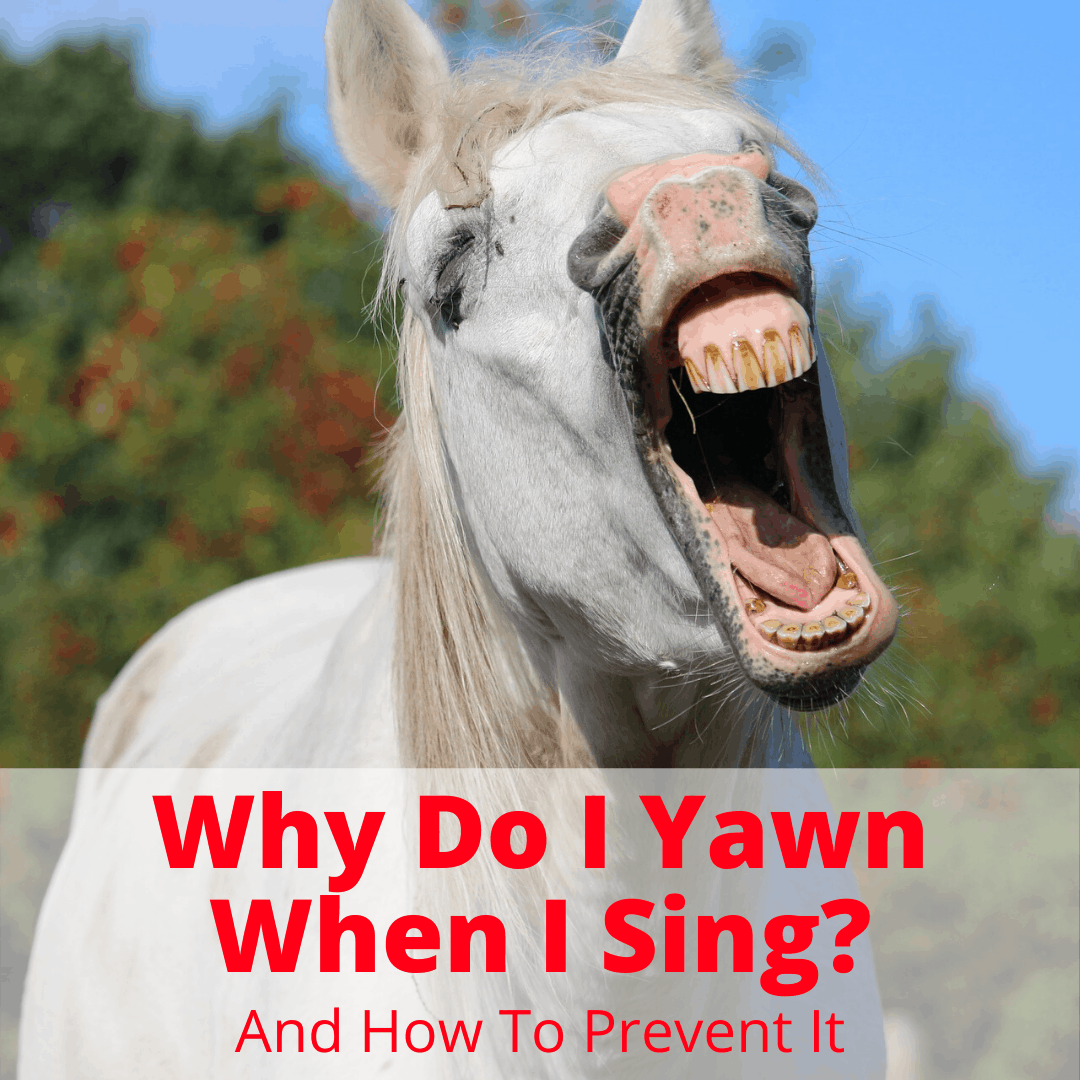 Yawning while singing is actually fairly common, just like sneezing or crying when singing.

Of course, that does not answer the question: “Why do I yawn when I sing?”

There are actually several possible reasons you might find yourself yawning involuntarily.

Some indicate a problem.

But other times, yawning is actually an indication that you’re doing something right.

We’ll go over all the possible causes, good and bad, and also cover what you can do to prevent yourself from yawning so much when you are trying to sing.

Why Do I Yawn When I Sing?

There are a number of possible causes that might trigger a yawn when you sing, apart from the obvious one of just being sleepy.

One reason for yawning when singing can simply be that your lungs need more oxygen. Using the proper throat position when singing can also cause yawning. It is simply a natural reflex of opening your throat in that way.

Some also say it can indicate a well-adapting soft palate, while others believe it might be a sign of iron deficiency.

As you can see, possible reasons for yawning while singing vary quite a bit, and they can be both positive or negative. Obviously, if it indicates something negative, like an iron deficiency, you want to take steps to correct the issue.

But even if it is the result of excellent singing technique, you may need to correct it, if it has a strong negative effect on your performance.

Check out the list of possible below and which one might be the reason you can’t stop yawning while you sing. And, if it is having a negative effect on your performance, learn some tips to avoid yawning.

Yawning Is A Reflex To Bring In More Oxygen When you sing, your body burns a lot of oxygen. In order to replace the air you lost your body might instinctively yawn. A yawn is one of the body’s reflex mechanisms to inhale a large amount of air.

Thus, there is not generally anything to worry about, if you find yourself yawning while singing. In fact, it can actually be a good indication that you are adopting the proper throat positioning when singing.

Nevertheless, you will probably want to stop this from happening, so that it does not impact your singing. Since yawning is a way for the body to draw in large amounts of air, you need to learn how to do this on your own.

In effect, you need to mimic the yawn and take in a large amount of air at once. You should also work on improving your lung power.

Your Soft Palate Moves When Singing

Beginning singers commonly experiencing frequent yawning episodes when singing. Another reason is that the soft palate moves when you sing, especially when singing consonants.

As the soft palate lifts, the brain gets confused between really needing to yawn and singing. Why? Because when you yawn, the soft palate also moves up at the beginning. The brain senses this signal, and initiates a yawn. This is something that happens less and less as you keep practicing and your brain figures out the difference.

As you can see, yawning when singing is usually not a bad sign, a medical symptom, or an indication of improper breathing. In addition to the previous two natural causes, it could also be a sign of you actually doing something exactly right: proper throat positioning.

Some songs require an open throat to keep help the sounds you produce from becoming overly nasal. Similar to the motion your soft palate makes when you yawn, certain vocal techniques cause you to open your throat in the same manner as if you are yawning. This initiates the yawn reflex. You can also overcome this through practice.

Exhaustion Makes You Yawn When You Sing

This cause is the most obvious one, which is why we listed it further down. But it is a very common reason. And if you find yourself yawning due to a lack of sleep, don’t just ignore it. Get some sleep! Being a singer can mean a lot of vocalizations, practicing, late-night performances, and even early morning rehearsals. If you lack sleep and are not getting enough rest, your vocal cords, lungs, and other singing-related anatomical parts could be susceptible to injury.

Sleeping is our body’s way to repair, heal, and rejuvenate. Not only does it allow muscle cells and various other bodily systems to recuperate from exhaustion, but it also helps in recovery from vocal fatigue. The vocal cords are a muscle, after all.

A voice and swallowing expert named Lori Ellen Sutton, even said in an article that a lack of adequate sleep could affect the voice in a lot of ways. If you are tired, you will not have the energy to inhale and exhale air properly while singing. Also, exhausted singers tend to increase caffeine intake, consequently resulting in mucus buildup on the vocal folds and dehydration.

Excessive Yawning When Singing May Indicate An Underlying Medical Condition

Yawning is typically triggered by fatigue, sleepiness, or exhaustion. Some yawns are quick, lasting only a few seconds. others last longer, before an open-mouthed exhale.  Excessive yawning is when you yawn more than once per minute.

While excessive yawning can be normal for some people, usually as a result of fatigue or lack of sleep, it may also be a manifestation of an underlying medical condition.

This nerve is located in the chest area, running from the brain down through the throat to the abdominal cavity. When this nerve becomes more active or stimulated, various bodily organs are affected, including the heart, blood vessels, intestines, and more. Furthermore, it may cause excessive yawning, not only when you are singing but also when you are doing other activities.

You may also feel lightheadedness, cold sweats, and nausea, in addition to excessive yawning. You may be at risk for low blood pressure and fainting episodes because the heartbeat slows down, and the blood vessels widen.

Other conditions that may result in excessive yawning are hypersomnia and narcolepsy. These are two disorders that involve a constant feeling of sleepiness.

Narcolepsy causes sudden, brief sleep attacks. For instance, someone who has narcolepsy can suddenly fall asleep while eating.

Hypersomnia, on the other hand, is characterized by too much sleepiness at inappropriate times. Both conditions may seem the same, but specialists say that they are two different things. Excessive yawning is a physical symptom of these health issues.

How To Stop Yawning When I Sing Now that you learned some reasons behind yawning while you sing let’s discuss some tips and tricks that you may find useful in putting a stop to it.

Regardless of the reason, these solutions will help you stop yawning when singing, so that it does not negatively affect your performance.

Do Deep Breathing Techniques Before Singing

There are many ways to improve your breathing technique. Prior to letting a note come out of your mouth, relax and breathe deeply for about five to ten minutes.

Start by slowly breathing in for five to six seconds. Hold your breath for one to two seconds and then exhale for four to five seconds. Doing this deep breathing technique for a few minutes before you sing can help your lungs get the oxygen they need to reduce yawning episodes.

Take breaths when you sing, especially when you are singing a fast-paced song, holding long notes, singing rap music, or belting out a high note. Breathing properly will help prevent yawning. Take breaths during breaks or pauses in the song. When it’s time for the instrumental part or sections without melody, quickly inhale some air.

In addition to getting a quick inhale and exhale during song breaks, you might want to use the deep breathing method as described in the previous tip to prevent yawning when singing.

During song breaks, quickly exhale before breathing in. Even if you inhale a lot of oxygen when there is a pause in the song, you still need to get rid of the carbon dioxide in your lungs. If you haven’t gotten it all out while singing, give a quick exhale, before inhaling more air.

Avoid Thinking About Yawning While You Are Singing

Did you just yawn now? The next time you are about to start a performance, or are in the middle of one, try to avoid thinking about yawning. Of course, that will probably make you think about it more….

Get Adequate Rest And Sleep Before Your Performance No matter how hard you work on doing deep breathing techniques before singing and breathing properly during singing, you will still find yourself yawning if you are sleepy!

After all, yawning is also your body’s reflex to remind you that you need to doze off at some point, get a good night’s rest, and let your body recover from the strenuous activities you did throughout the day.

The only way to avoid this type of yawning is to actually get some sleep. And that’s a good idea anyway. If you are sleep-depriverd, it could affect your performance, because your soft palate, throat, lungs, and body cells lack the energy to function well.

In some rare cases, the only solution is to get help from a health care professional. If you have a family history of the medical conditions mentioned above, we recommend seeking advice from a doctor.

If you do not have any medical issues that would cause you to yawn excessively and you have tried all of our tips on this list, but you still can’t stop yawning while singing, you could also get in touch with a vocal coach to see if they can help.

It is not uncommon to yawn involuntarily while singing, for any number of reasons. Whatever the reason, there are steps you can take to keep from yawning excessively. Follow our tips above and keep at it, and you should soon find that you are yawning far less frequently.