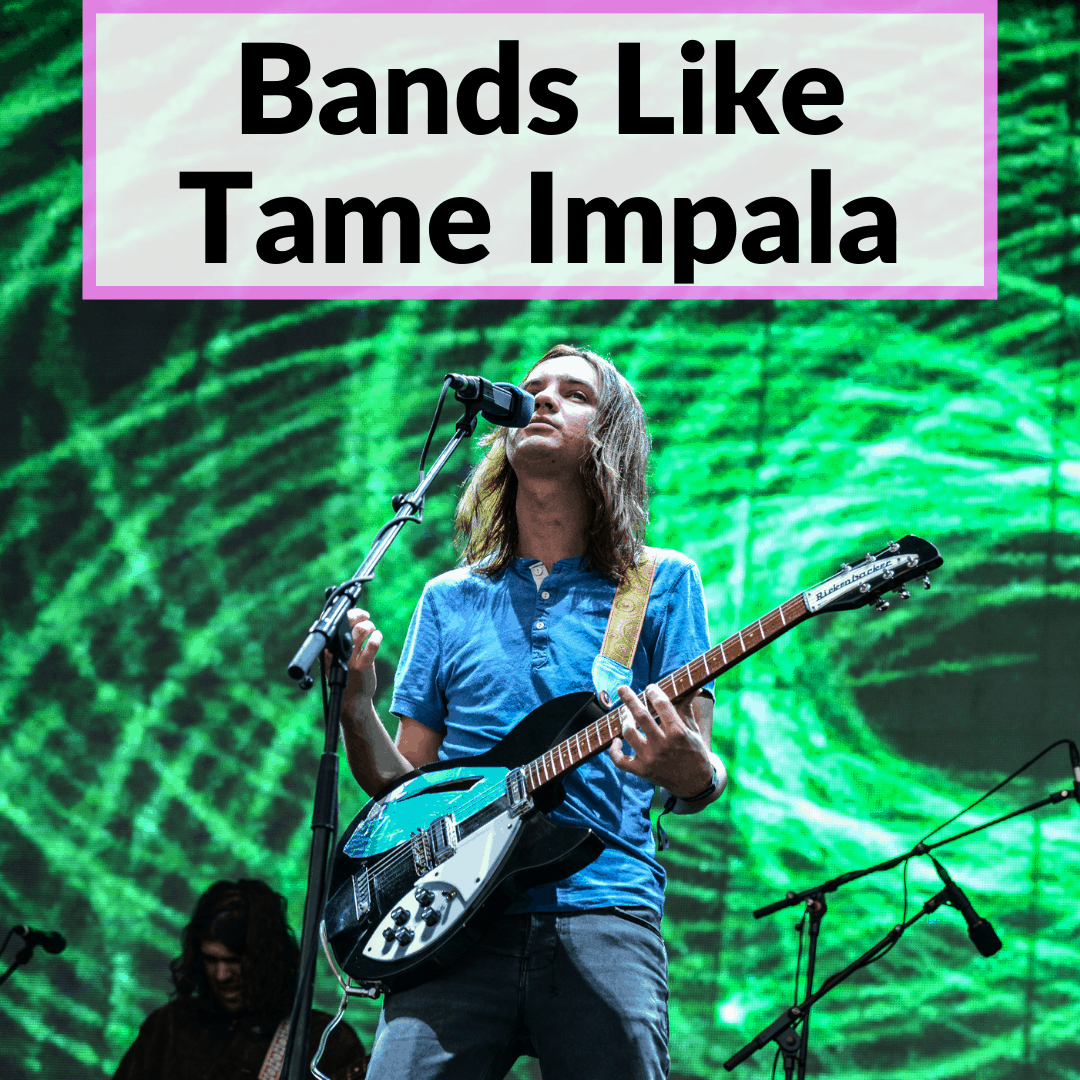 Kevin Parker is a musical genius.

He makes all the music and plays all the instruments for Tame Impala. That makes the sound impossible to copy.

But there are plenty of bands like Tame Impala that have a similar sound.

Obviously, not all of these bands are any good. But some are great and belong on the playlist of any Tame Impala fan.

Let’s take a look at our favorite artists that make music similar to Tame Impala. I hope you find some new music you can enjoy in the list below.

Formed back in 2004, Beach House is a duo consisting of Victoria Legrand on keyboards and vocals and Alex Scally on guitar, keyboards, and backing vocals. The easiest way to categorize them would be to put them into the dream pop genre.

Their overall atmospheric feel, very similar to what Kevin Parker of Tame Impala is doing, is often fused with indie rock and psychedelic rock. They’ve also often been categorized as a shoegaze band.

They have a total of seven albums so far, and the duo has evolved since their formation in the 2000s. Bloom from 2012 was their biggest commercial success, but you can start with pretty much any of their records.

Coming from France, Melody Prochet is one of the musicians keeping psychedelic rock alive these days. Although her project Melody’s Echo Chamber is not as big as Kevin Parker’s Tame Impala, we can certainly draw some parallels between the two.

In fact, Melody supported Tame Impala on the 2010 European tour with her old project named My Bee’s Garden. After that, she collaborated with Parker himself in order to start Melody’s Echo Chamber.

There have been two albums and one EP so far. 2012’s self-titled debut is arguably closer to Tame Impala’s work, although you can’t go wrong with 2018’s Bon Voyage either.

MGMT is a duo consisting of Andrew VanWyngarden and Benjamin Goldwasser. Although both share multiple duties in the band, the mastermind is VanWyngarden. He is the principal songwriter and the lead vocalist. Over the years, MGMT also recruited a few different musicians for live shows.

The duo has released four full-length studio albums so far, with their style ranging anywhere between indie rock, psychedelic rock, and synth pop. You can notice some obvious similarities between them and Tame Impala, but they have their own recognizable style.

Named after a small unincorporated community in the middle of nowhere in New Mexico, Trementina is an independent psychedelic rock band.

Such a name choice fits their musical style pretty well, as everything sounds atmospheric and dreamy, drenched in reverb and other effects.

The band isn’t that well-known and comes nowhere near Tame Impala in terms of commercial success. Nonetheless, they’re not to be overlooked. And if you’re really interested in exploring some lesser-known psychedelic-infused bands, Trementina would be the best way to start.

Just like Tame Impala, Washed Out is a project led by one ambitious individual who does most of the work. Ernest Weatherly Greene Jr. started his work under this name sometime in the late 2000s.

Though similar to Tame Impala, there’s way less rock and way more synthy and dreamy atmospheric pop stuff in the equation. So if this is the side that you like more about Tame Impala, Washed Out would be a great project for you to check out.

Ernest Weatherly Greene Jr. has four albums and three EPs released so far and pretty much anything is a good way to start exploring his works.

Coming from New York City, DIIV is a quartet (they were a quintet for a while as well) that generally fits the so-called shoegaze movement in rock music. Active since 2011, they have released three albums so far.

The band’s lead vocalist and guitarist Zachary Cole Smith has been the main creative force driving the band for all these years, while guitarist Andrew Bailey is the only other original band member remaining at this point.

The band was initially started as Smith’s solo project, so they have an approach comparable to Kevin Parker and Tame Impala, along with the band’s overall atmospheric and psychedelic style.

If you prefer a gentler and more poppy version of the Tame Impala sound, we recommend Still Corner. This duo is one of the modern bands defining the whole dream pop movement of today and features producer and songwriter Greg Hughes and singer Tessa Murray.

Their dream pop and neo-psychedelic style is as weird as the story of their formation. Hughes and Murray met accidentally at a random London train stop when a train was diverted to an alternate route.

Coming from Oxford, England, Glass Animals are a rock band that have been active since 2010. Although there are only three albums recorded and released under this name, the band definitely has a promising future, especially among fans of psychedelic stuff in the style of Tame Impala.

Looking at their more recent stuff, Heat Waves is a song that attracted a lot of attention in 2021. That could be a great way for you to start on their works.

If you’re into Australian artists, then Pond is another great group worth checking out. Founded in 2008 with four members a fifth member was added during 2009.

The basic four members have remained the same, while the drummer kept changing over the years. Interestingly enough, Kevin Parker himself was one of the drummers, serving between 2009 and 2011.

Aside from drumming on the band’s third album Frond, he has since continued collaborating with the band as a producer and a mixing engineer. The fact that he’s still involved with the group makes Pond worthy of your time if you’re into Tame Impala.

King Gizzard And The Lizard Wizard

Let’s get one thing straight – there’s no band out there like King Gizzard and the Lizard Wizard. Starting as a garage rock band, they evolved into an art collective that incorporates plenty of different genres in their music

And, of course, they’re also an Australian band, heavily influenced by psychedelic music. Although their style is all over the place, even going deeply into thrash metal, Tame Impala fans are often fond of King Gizzard and the Lizard Wizard.

And although they have not been around as long as Tame Impala, they’ve released a pretty large number of albums during this period. In 2017 alone, they released five records. No matter what your preferred genres are, you’ll definitely find something you like in KGLW’s music.

The Flaming Lips take us all the way back to the early 1980s. Led by lead vocalist and multi-instrumentalist Wayne Cone, they’re still active to this day and have released 17 studio albums so far.

Aside from Cone, the only other constant member since the beginning has been bassist and keyboard player Michael Ivins.

The band is often put into the neo-psychedelic genre, but they are difficult to categorize by predetermined styles. Wayne Cone, who is the band’s leading creative force, has always been pretty innovative and ambitious.

In fact, they pushed the boundaries of live shows. In the late 1990s, they even implemented the use of Walkman-like devices so that the audience would have a full sonic experience during their performances.

It’s also worth noting that Kevin Parker has heavily been influenced by Flaming Lips. So if you haven’t checked them out yet, we’d advise that you do.

Then we have Sugar Candy Mountain. They are one of the lesser-known bands you can check out if you’re feeling experimental. Coming from California, they combine pop and psychedelic rock music. They’re not that big, although they have released a few albums so far. All are worth checking out.

If you’re into solo artists who do all of their work alone, then Kainalu is what you’re looking for. Conceived by Trent Prall, this project explores dreamy-pop territories by adding some funky and groovy arrangements to the style. Although he’s semi-obscure and nowhere near as big as some other names mentioned here, we’d highly advise you to check him out.

No matter what kind of music you’re into, there’s at least some stuff by Gorillaz that you’ll love. This popular animated and virtual band was conceived by Damon Albarn and Jamie Hewlett who pretty much did all the work on both the musical and artistic aspects.

Many years later, and they’re now one of the most important names in 21st-century music. By mixing rock, pop, hip hop, trap, and plenty of other genres, they broke out of conventional molds of modern music.

In 2020, they teased a possible collaboration with Kevin Parker of Tame Impala, but nothing has been confirmed so far. If you want even more music in this vein, check out our article on bands like MGMT, which also includes Gorillaz and Tame Impala.

They are also featured in our article of bands that sound like Radiohead. During two decades of work, they released five studio albums and a soundtrack album for the 2013 film Her.

Many attributes have been used to explain their overall style, but you’ll have to take a listen for yourself to fully understand them. It helps to know that one of their major influences was a band like Depeche Mode.

Mazzy Star came from Santa Monica, California and was formed in 1989 from members of the band Opal. The primary members were vocalist Hope Sandoval and guitarist, keyboardist, pianist and songwriter David Roback. Roback passed away in February 2020.

Mazzy Star’s most famous song is Fade into You. It showcases their dreamy sound and Hope’s ethereal voice. They released 4 full-length albums during their time as a band. Any one of them would be a great starting point to see what their music is about.

If you like Tame Impala, you should enjoy at least a few of the above bands as well. All have something in common with Tame Impala. In several cases, there is even a direct connection with Kevin Parker.

If you know some other great bands like Tame Impala, please feel free to share them in the comments below. I’m sure there are a few we overlooked, or that we don’t even know about. We’re always happy to add more great artists to our list!

If you want more great music selections, check out some of our other similar articles covering bands that sound like Tool, groups like Polyphia, and artists like Pink Floyd. Tame Impala themselves were includes in our list of bands like the Arctic Monkeys, so be sure to check that out as well.