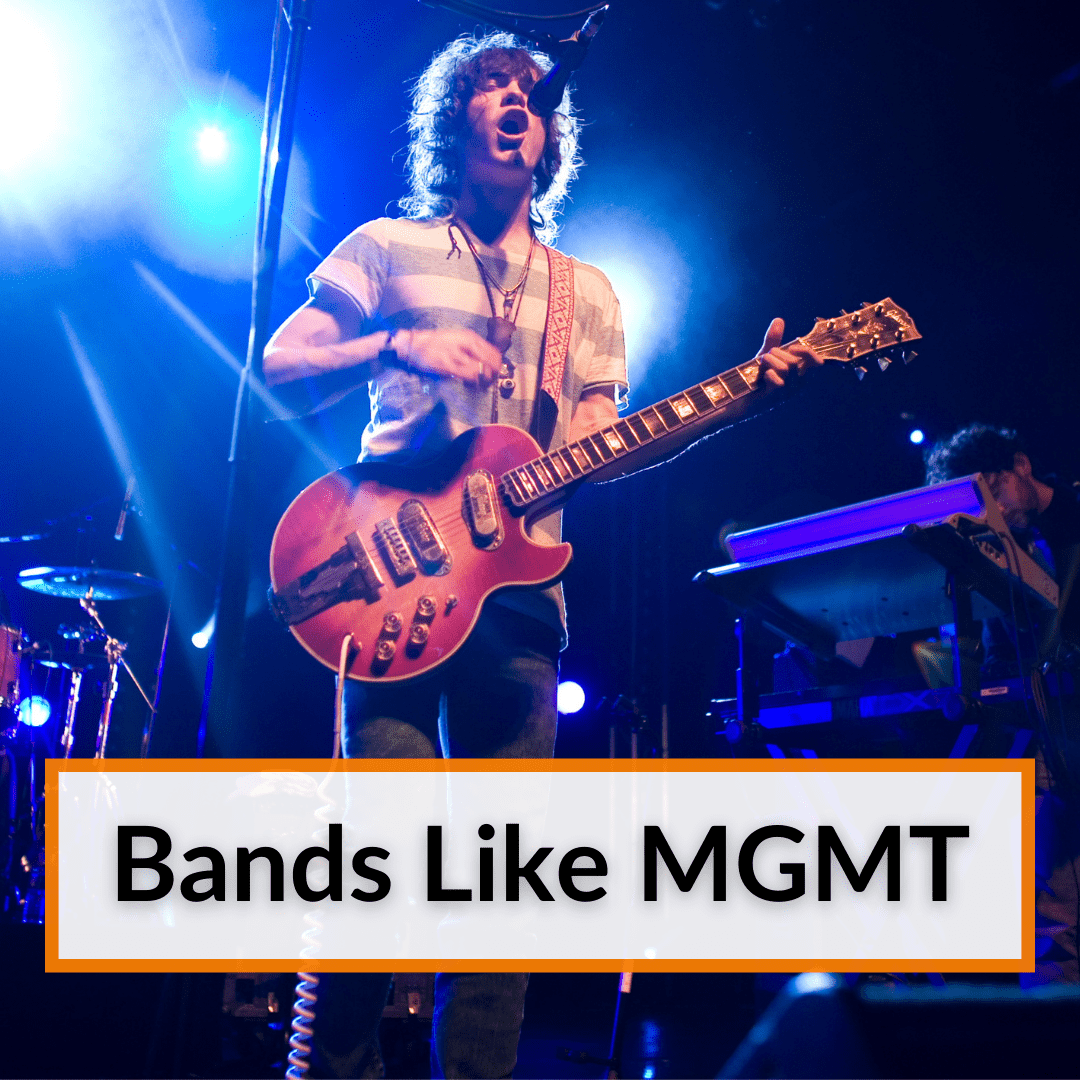 Finding bands like MGMT turned out to not be overly difficult.

Sure, they have a unique sound that is a blend of many different genres.

But that style has actually become quite popular over the past 10 or 15 years, and there are numerous bands that blend genres in a similar fashion.

And some of those bands are actually far more popular than MGMT.

Whether they are more popular or not, all of the groups below bring a similar sound or style to the table. And all make great music.

Keep reading for some great bands similar to MGMT.

Let’s kick things off with a well-known electronic indie pop-rock band: Portugal. The Man. The band began in 2004 in Alaska but soon after moved to Portland.

To this day, the band has managed to put out 8 studio albums containing various hits, one of which is Feel It Still, which was decorated with numerous awards.

Due to Gourley’s explorative nature and lively spirit, the musical approach is often abstract. The band mixes several genres at once. Sound familiar? Yes, just like MGMT.

Tame Impala is another famous band that is very similar to MGMT, but perhaps even more popular. Tame Impala is a great example of a one-man band, just like Gorillaz, Moby, etc.

Kevin Parker, a genius musician from Australia, creates fantastic psychedelic music mashed with pop, rock, synth, and many other genres.

Parker does pretty much everything by himself – writing, recording, producing, performing, managing, and so on.

He does have a touring band that consists of Dominic Simper, Jay Watson, Cam Avery, and Julien Barbagallo, alongside Kevin Parker, of course.

All of Tame Impala’s records have won numerous awards, especially in Australia. This has led to various fruitful collaborations and now the band has tens of millions of fans all around the globe. Everyone seems to enjoy this psychedelic rock music that is often spiced up with a pinch of melancholy.

Another Australian band that resembles MGMT quite a lot in their psychedelic electro-rock sounds. The connection is quite obvious since Pond was created by Nick Allbrook and Jay Watson, two of Tame Impala’s touring members.

The other two Pond members are Jamie Terry and Joe Ryan. The four started as an experimental band, both in music and lineups. But as they immediately gained success from the first album, they solidified their lineup and have kept it the same since.

Just like MGMT and Tame Impala, it is impossible to classify Pond into one genre. They fuse psychedelia with indie pop, rock, synth, even prog-rock! With 8 studio albums, there are a variety of different songs for you to enjoy, and each album brings something that everyone can listen to.

We already mentioned how Gorillaz is a good example of a one-man band. Damon Albarn, a former member of Blur, is the guy who creates all the music, which is often followed by fantastic artwork. Jamie Hewlett is the one to praise for the incredibly fun and innovative videos and artwork.

It is interesting that this collaboration came to be, since Albarn and Hewlett were not very fond of each other upon meeting. It was only after a few years that these two bonded and eventually got the idea for a virtual band, which is now known as Gorillaz.

Gorillaz is a band that started creating unique music in the late 90s and is therefore is a pioneer in various aspects. The music style includes electronic music, alternative rock, and hip hop among other genres. Due to catchy, upbeat songs, Gorillaz has become a great influence on many bands today.

Unknown Mortal Orchestra is one of the younger bands today, originating in 2010. That same year, the first single Ffunny Ffrends hit the world and was an immediate hit.

The band has that 20th century psychedelic style mixed with modern indie rock vibes. The style is not limited to American nor British rock influence, since Ruban Nielson brought something special from New Zealand with him.

The music is upbeat, catchy, and weird, with a great psychedelic feel and fantastic music videos. This is certainly a band that resembles MGMT in many ways.

A band full of absurdities – from the band name, song names, publicity problems, and much more. Speaking of which, Josh Hodges, the founder of the band, explained the situation briefly. In summary, he was around obnoxious people whom he hated, and one guy once titled himself as a “starfucker”.

The absurdity of such a statement inspired Hodges to give the name to the band, which again goes further in absurdity considering the style of the songs. The name is more or less suitable for metal or some comedy band, not the mellow indie-pop band that Starfucker is.

The name naturally caused several problems and Hodges was on the brink of permanently changing it into a Pyramid. But, as the band was all about absurdity, he decided to keep the name even though it causes problems.

All in all, a very interesting band to listen to that quite resembles MGMT in style.

The band was formed in 2007 in the UK, mainly by Joe Newman and Gwil Sainsbury who were roommates at the time

Newman already had some songs that were written while on hallucinogens and Sainsbury quickly got into the production process. With Gus Unger-Hamilton and Thom Sonny Green in the mix, the lineup was formed.

The band went on to release several singles, all of which instantly became popular. The psychedelic synth-rock songs have received numerous rewards and the band continued to create.

Ultimately, Sainsbury left the band and was replaced by Ellie Rowsell as the singer. The band continues to periodically put out singles to this day.

Empire Of The Sun

Another Australian duo, Empire of the Sun is made up of Luke Steele, also a member of The Sleepy Jackson, and Nick Littlemore of Pnau.

The band makes its debut in 2007 and got to release the first album in October 2008. Walking On A Dream has had success in Australia, and especially, in Great Britain.

In December 2008, a BBC poll found the duo in fourth place among bands capable of marking the 2009 musical scene.

The first two singles from the album, Walking on a Dream and We Are the People, highlight Empire of the Sun from a commercial point of view throughout Europe, with good sales and approval success.

The light, happy, and upbeat synthpop music has gathered a lot of fans all around the world, and We Are the People was on Top Charts for weeks.

With one eye on electronic pop and one eye on the music of the 70s and 80s, Joseph Mount was inspired by his childhood in the south of England to create a sunny, warm album packed with great songs like The Bay, The Look or Everything Goes my Way.

Inspired by the versatility and emotional intelligence of Björk and Aphex Twin, Metronomy began as Mount’s digital project, after several previous experiments as a drummer.

The group has been gaining popularity thanks to its particular musical style, which, despite maintaining a classic electropop base, also incorporates complex vocal arrangements and classic rock instrumentation.

His music has been compared to that of LCD Soundsystem, The Chap, Bloc Party, MGMT, or Hot Chip, among others.

Metronomy became known in various musical sectors by remixing artists such as Roots Manuva, Franz Ferdinand, Klaxons, or Goldfrapp, among others.

Three albums later, with a band format and a sound in constant evolution, Metronomy is considered as one of the most interesting bands to come from the British Isles.

Passion Pit is an electronic indie-pop musical project, originally from Massachusetts, USA. The project was formed solely by singer-songwriter Michael Angelakos at the end of 2007.

He wrote, recorded, and edited the initial songs by himself from his laptop. Those songs would eventually be part of what would become his first EP Chunk of Change.

After attending a performance near Boston, a Berklee College of Music student called Ian Hultquist became so interested in Angelakos’ project that he approached him with the proposal to form a band with the musical material that Passion Pit had at that moment.

It was there that both musicians began to work together, which would eventually lead them to end up forming a group with more members on board.

Among them would be Ayad Al Adhamy on synthesizer, Thom Plasse on bass, and Adam Todd Lavinsky on drums. During this new facet that Passion Pit found themselves in, it would take a while for them to try to develop a collaborative format, as well as a structure that would work best for them.

Shortly after the group signed with Frenchkiss Records in 2008, musicians Nate Donmoyer and Jeff Apruzzese entered the band, replacing Lavinsky and Plasse, respectively.

The band creates fantastic indie rock songs that millions of fans are enjoying. The numbers on YouTube don’t lie.

Since there are so many bands like MGMT that also blend elements of indie pop, synth-pop, psychedelic pop, indie rock, psychedelic rock, neo-psychedelia, electronic rock, and more, we narrowed our list down to the absolute best. Finally, check out our list of bands that sound like The Strokes. MGMT is one of the groups listed.