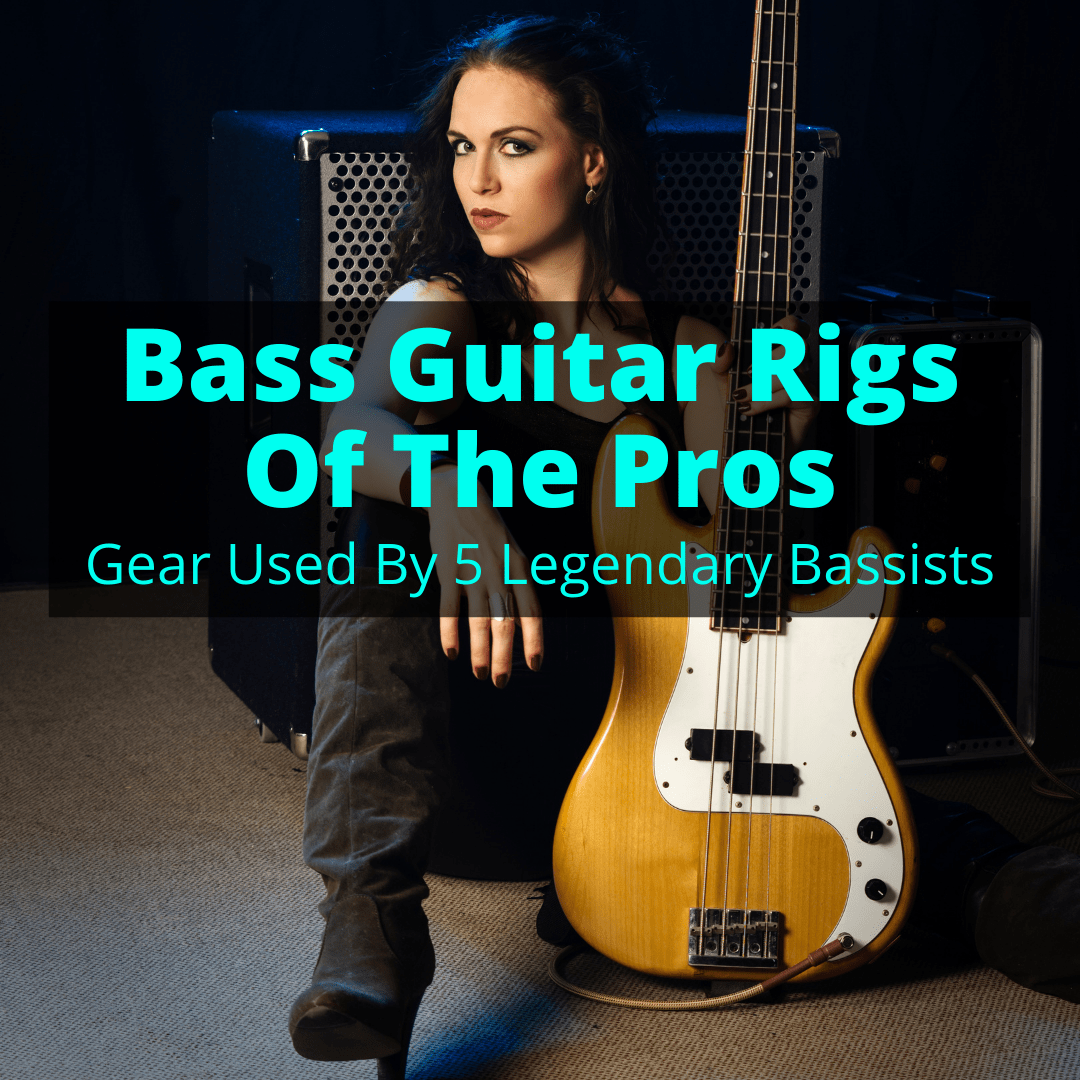 You might not be able to afford any of it yet.

But as a bassist, it’s only natural to wonder what gear the best of the best use.

It gives you something to aim for.

And in many cases, budget brands offer stripped down versions of the best basses for a much lower price.

With that in mind, let’s take a look a 5 of the most famous bassists ever and see what bass guitar rigs they use.

Bass Guitar Rigs Of The Pros

There are obviously many other bassists we could have included, but we had to keep the article to a reasonable length.

We are not saying the 5 bass players below the best ever, though you could certainly make that case. All have had a huge influence on today’s bassists, so it made a lot of sense to detail their particular equipment choices.

Rush is one of the most respected bands of all time. Fronted by bassist and singer Geddy Lee, they conquered a lot of new musical territories.

And a huge part of their musical greatness was not only Geddy’s songwriting and impeccable bass playing but his tone as well. Combined with his high-pitched voice, as well as Neil Peart’s drumming and Alex Lifeson’s guitar, it was just a perfect progressive rock setting.

As far as bass guitars go, Geddy’s main choices were Fender and Rickenbacker. From the earliest days, he went with the Fender Precision Bass, later complementing it with classic Rickenbackers like the 4001 or the 3001.

There’s also an unusual Rickenbacker 4080/12 present in his collection – a double-neck instrument featuring a 4-string bass and a 12-string guitar with humbuckers.

The Rickenbacker 4080 was also a double-neck instrument, only with a 6-string neck instead of a 12-string one. He also played different variations of Fender’s Jazz BassSteinberger L2, Wal MK II, and even his own signature Fender model.

But the rest of his rig never was really that complicated, usually relying on simple principles. He did use Electro-Harmonix’s POG2, the Polyphonic Octave Generator, allowing him to create some pretty unique tones, like on “The Anarchist.”

He’s also a keyboard player, with pretty intricate rigs being a part of his live setup. But one thing that stands out is the floor-based keyboard Moog Taurus I which allows him to play it at the same time he’s playing bass.

When they emerged on the scene back in the 1980s, the Red Hot Chili Peppers were a shocking discovery to many. Fusing rock and metal music with funk was somewhat outrageous, but that was exactly what launched the band into the stratosphere in the 1990s.

One of the most important elements to the band’s sound and style is Michael Peter Balzary, popularly known as Flea. His bass playing that pretty much defined the Red Hot Chili Peppers sound.

In more recent years, he was often seen using a Fender Jazz Bass from Fender’s Custom Shop. There have been other brands in his collection over the years, like Spector, Teisco, Wal, and others.

As far as amps go, Flea is pretty fond of Gallien-Krueger, paired with Gallien-Krueger and Mesa Boogie cabinets. The 2001RB amp head, in particular, is what he mostly uses these days.

Flea’s unique style of playing also includes heavy use of effects pedals. For many RHCP songs, he uses the Malekko B:Assmaster distortion which gives him that uniquely fuzzy tone.

Then there’s also MXR M133 Micro Amp that adds a simple clean boost, with just a slight coloration. Of course, there has to be a wah pedal and Flea’s choice is the Dunlop Cry Baby 105Q.

One of the most interesting devices he uses is the Moog Moogerfooger MF-103 12-Stage Phaser, allowing him to create those insane yet unique tones that we all love him for.

At a time when the majority of listeners thought that the bass isn’t that interesting and that there’s nothing new or innovative you can do with the instrument anymore, out came Thundercat with a very innovative approach.

Making a huge breakthrough after playing on Kendrick Lamar’s 2015 album “To Pimp a Butterfly,” the bassist began exploring new musical territories and pushing the boundaries of conventional bass playing.

His insanely groovy funky playing is complemented by his awesome tone. At this point, his most prominent bass guitar is the Ibanez Thundercat signature model, the TCB1006.

Featuring a hollow-body construction, as well as 6 strings, this one is pretty huge, dwarfing any standard 4-string or 5-string bass. It features 24 frets, a scale length of 34 inches, and EMG’s 45HZ passive pickups.

Thundercat is also known for his use of MTD Custom Shop 6-string bass which he played on before getting the signature Ibanez bass guitar. There’s also a 4-string Ibanez Artcore AGB200 in his collection, which is also a hollow-body instrument like the TCB1006.

Going over to amplifiers, Thundercat is currently using Aguilar stuff, most notably the Tone Hammer 500, DB 751, and DB 750 models. These are accompanied by Aguilar’s GS410 and DB410 cabinets.

Prior to switching over to Aguilar amplifiers, he used a SWR750x head paired with SWR Goliath II cabinets, which bear four 10-inch speakers.

With these basses and amps, Thundercat has a few important pedals to enhance his tone. He’s well known for using DigiTech’s legendary Whammy, as well as the Pigtronix Bass Envelope Phaser. Occasionally, he also uses the Boss SYB-5 Bass Synthesizer and the Moog Moogerfooger Low-Pass Filter.

Talking about bassists who pushed the boundaries, it’s impossible not to mention Les Claypool and his band Primus. Rarely do you find such a catchy-sounding group with music that’s mostly bass-centric.

Starting his career in the late 1970s and the early 1980s, he eventually founded a group called Primate, which would eventually become Primus as we know it today.

The band’s style could be described as a mixture of funk and metal, although there are plenty of other genres in there as well.

Claypool also became famous for composing and recording the intro theme to South Park. But primarily, music fans know him for his unconventional techniques and unusual choice of notes.

One of Claypool’s most notable bass guitars is the Carl Thompson model, popularly known as the “Rainbow” bass. The instrument is made out of multiple different tonewoods.

Most importantly, it is a fretless bass with six strings and a pretty crazy double-cutaway body design. The instrument comes with one pickup, EMG’s active DC.

Claypool also owns Carl Thompson walnut-body 4-string, equipped with an EMG-BTC preamp and an EMG 35 pickup. The most shocking part about it is that it comes with a Kahler tremolo bridge.

He also has some other crazy basses, like the Regal RD-05 with the resonator body, as well as the Michael Kelly Bayou 4, which also has a resonator body.

He occasionally even uses an upright bass. Aside from these crazy basses, Claypool also has a Fender Jazz Bass, Ibanez Musician, and plenty of others.

Over the years, Claypool preferred to go with Mesa Boogie and Ampeg bass guitar amplifiers with the 400+ model being an important part of his live rig.

Then there’s also the Mesa Boogie Subway D-800 amp that he uses with matching Subway cabinets, featuring the 1×12-inch formation.

Claypool has also often used the ADA MP-1 tube preamp, as well as the ADA MP-2 model. Occasionally, he would also use an Ampeg amp, like the SVT-4PRO and the SVT-3PRO.

As you’d expect, Claypool also loves weird pedals and effects: anything that could enhance the harmonic chaos that is Primus.

The Korg ToneWorks AX300B is one of the things that he loves, which he mostly uses for envelope filtering.

Then there are also Line 6’s DL4 Delay Modeler and DM4 Distortion Modeler. But in order to enhance his tone, the Electro-Harmonix Hot Tubes plays a huge role, allowing Claypool to “saturate” it a bit.

As more and more musicians are going into the world of digital modeling amps, Les Claypool began using Fractal Audio Systems’ AX8, which is a floor-based unit. It’s not only an extremely potent device but also a very practical one.

Sting is one of the most influential musicians of the 20th century. Aside from fronting The Police, he’s also had an immensely successful solo career.

His impeccable voice has always been complemented by an amazing bass tone, which is a result of his amazing rig.

Other than that, he has also used Ibanez, Spector, and Steinberger basses. Although a pretty unconventional instrument, Sting also used a Hamer 8-string model, featuring four choruses of two strings.

As far as amplifiers go, he’s usually very fond of Ampeg, which has most often been his go-to brand with the SVT-4PRO being the main part of his rig.

Other than that, his signal chain is not that complex. However, he also used the foot-operated synth, the Moog Taurus 2, which is a more advanced model than the one used by Rush’s Geddy Lee.

There you have it. 5 of the most influential bass players ever and the equipment they use. These guys prove that when it comes to guitar vs bass, the guitar does not necessarily win.

The gear they use is not cheap, but even if you can’t afford most of it now, it gives you something to strive for in the future.

And, as mentioned, companies like Squier often make stripped down versions of professional basses and sell them for much less (in Squier’s case, they do this with Fender basses).