And it is felt even to this day. The electric guitar is associated with virtuosity and lightning speed shredding.

If you want to hop onto this shred-train, or if you’re already somewhat experienced with it, you’ve no doubt noticed how hard it is to find a proper instrument for a reasonable price. Sterling By MusicMan Majesty MAJ100
4.5
$1,099.99
Pros:
Cons:
View on Amazon View on Guitar Center
We earn a commission if you make a purchase, at no additional cost to you.

It is a stripped-down and much cheaper alternative to the Music Man Majesty. But it retains many of the qualities that make that instrument one of the best ever.

Read the rest of this Sterling By Music Man John Petrucci Majesty MAJ100 review to find out just why we considered it the best electric guitar under $1000 (before the recent price increase), and if it is the right one for you.

As mentioned, this is a cheaper alternative to Music Man’s Majesty guitar. Although mind-blowingly awesome, that particular instrument comes with an astronomical price tag.

Sterling’s MAJ100 offers some of the important qualities with a “stripped-down” approach and a price just below the $1000 mark.

The overall design is pretty close to the Music Man Majesty guitar. There are a few differences, like the inlay on the first fret, but the guitar still retains the same aesthetically pleasing look.

Combined with its great features and very few downsides, it’s a guitar that can satisfy even a professional shredder.

Sterling By MusicMan Majesty MAJ100
4.5
$1,099.99
Pros:
Cons:
View on Amazon View on Guitar Center
We earn a commission if you make a purchase, at no additional cost to you.

As mentioned, the Sterling version has an almost identical design as the more expensive Music Man Majesty. The body is made of basswood and the neck connects to the body using a “set neck” construction. It has a similar profile and design to the neck on the more expensive instrument.

It’s accompanied by a rosewood fingerboard with 24 frets and a dual-action truss rod for advanced setup options. It looks beautiful, but you have to make sure to clean the fretboard regularly, of course.

The headstock retains the company’s very practical “6 + 2” formation, allowing strings to go in a straight uninterrupted line, which adds to the guitar’s amazing tuning stability.

Of course, the guitar is packed with some amazing ergonomic features. The guitar is very comfortable to hold and play.

The neck and the body joint has an indent that makes it easier to access those higher frets. At the same time, the cutaways go deep towards the end of the fretboard, which further assists you in reaching every single one.

The Majesty MAJ100 comes with two humbucker pickups. Although a “stock” variant, they are voiced pretty well and you can get some tonal varieties in there with the 3-way switch. A bit of a downside is that the guitar could use a coil-split or a coil-tap feature.

On the other hand, the MAJ100 has the same push/pull volume pot for a clean boost that we see on the Music Man Majesty guitar. The additional 12 dB are especially useful if you’re playing through a tube amp or any other device that’s sensitive to your playing dynamics. You should also bear in mind that this feature comes with an active preamp, although the pickups themselves are passive.

If you want to play the guitar without an amp, this gives you plenty of options. You can connect it to any number of devices, like a headphone amp, a mixer, a stereo system, a computer, etc. The bridge might not be the one we see on the Music Man Majesty, but it’s still pretty great: the Sterling’s SBMM Modern Tremolo, which allows easy operation in both directions. Although the guitar doesn’t have a locking nut, we have simple locking tuners. Even with heavy tremolo use, you won’t need to worry about going out of tune easily.

When we talk about shred-oriented instruments, it’s impossible to avoid mentioning Ibanez. After all, they’re one of the first companies to push the boundaries and bring the previously unthought-of combinations, like the Stratocaster shape with humbucker pickups.

Since the demand for virtuoso-friendly instruments was high back in the late 1980s, the company came up with their RG series. One of the most popular instruments in that series is the Ibanez RG550, which brings all the essential features a virtuoso player might need, without a head-spinning price tag. Ibanez RG Genesis Collection RG-550 View on Amazon
We earn a commission if you make a purchase, at no additional cost to you.

Of course, it’s not exactly a budget guitar, but it’s a pretty great deal for the money. And the price is pretty close to Sterling’s Majesty MAJ100, making a direct comparison inevitable.

While both of these instruments are conceived as “Super-Strat” kind of guitars, the Ibanez here has a more of an old school approach, kind of close to Steve Vai’s signature JEM models.

The MAJ100 has cutouts that go deeper, all the way to the 24th fret, while those on RG550 don’t. We also have Ibanez’s classic “6-in-line” headstock and their regular tuning machines.

Now, the bridge is where things get interesting. Although both of these guitars are top-notch in this regard, Ibanez has a pretty great Edge double-locking tremolo bridge, paired with a locking nut. However, we’d say that both of these guitars manage to stay in tune even with heavy tremolo use, so it just comes down to what you prefer. 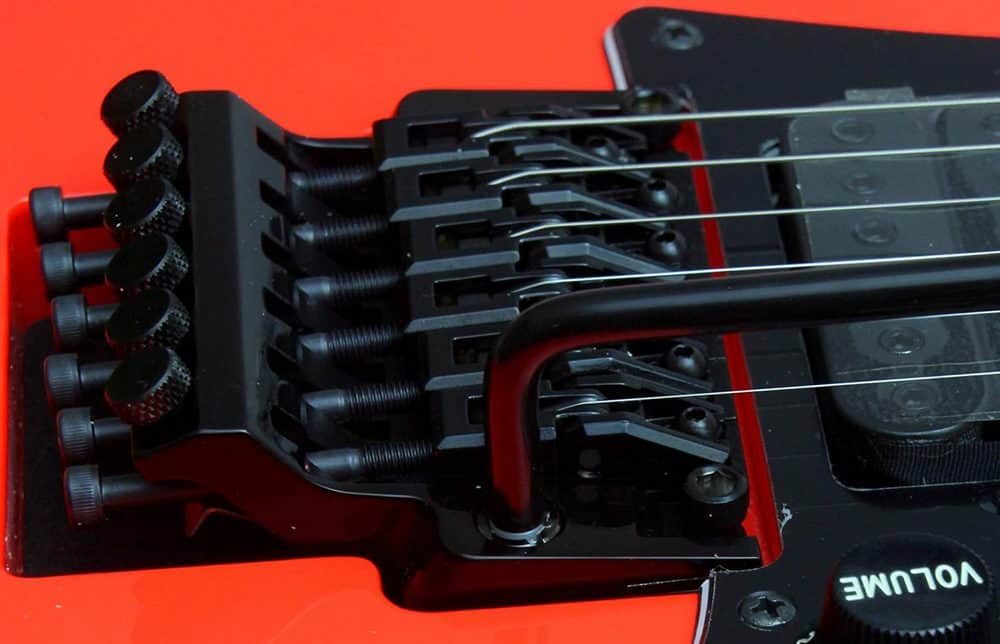 The pickups, however, might be a little more interesting on the Ibanez. First, we have two humbuckers in the regular bridge and neck positions. In the middle, we have a single-coil pickup, resulting in five combinations.

This makes Ibanez RG550 a bit more versatile than the MAJ100, especially when it comes to those sparkling bright “twangy” tones. And although these are Ibanez’s pickups, they’re far from what you’d expect from stock stuff. They sound great.

While the Sterling is more ergonomic overall, the Ibanez has its advantages as well. For instance, the volume pot is much closer to the strings, which makes it easier to do all those volume swells when needed.

In the end, these guitars fall into the same quality tier. It only comes down to what you prefer.

The Sterling MAJ100 indeed is a viable cheap alternative to the Music Man Majesty and comes with almost identical ergonomic advantages. Done in collaboration between Music Man and Dream Theater’s John Petrucci, it’s unlikely you’ll find another guitar as comfortable as the MAJ100 within this price range.

The Ibanez, however, is more versatile with its five pickup combinations and provides some nice features, like the Edge tremolo, that make it the other top choice in this price range, especially if you want an electric guitar for metal.

It’s impossible to say which is “better.” Both of these guitars are true shred machines that can find use in an abundance of genres. Although focusing mostly on hard rock and metal music, they’re both pretty awesome for jazz, blues, and even pop music as well.

We were surprised how amazing the Sterling By Music Man John Petrucci Majesty MAJ100 is for its price range.

Sure, the lack of the coil-split or the coil-tap feature is a downside, since it would be nice to have those sparkling funky tones or “ice pick” bluesy sounds.

But when we consider all the other features, we can’t really complain that much. And despite this lack of single-coil tones, the guitar easily finds its way into almost any genre that comes to mind. After all, John Petrucci had his say in this guitar’s design process, so it’s only expected that it would be a versatile shred machine.

And we just can’t stress enough how comfortable and easy to play this guitar is. These are pretty much the same traits we see on Music Man’s Majesty guitar. But there are some significant differences between these two models.

One of the most obvious ones is the neck-through construction on the Music Man Majesty version. It also features a substantially improved bridge, and even an additional piezo pickup, along with some “blending” combination between the magnetic and piezo pickups.

At the same time, you should bear in mind that the Music Man is more than three times the price, so it should have features this version does not.

In the end, if you’re a metal guitar player who’s mostly focusing on the “shreddier” side of the genre, Sterling’s MAJ100 Majesty is a guitar to consider. Of course, it’s far from a budget option and it includes some pro-level features.

We would generally recommend it to a more advanced player than a beginner, but if you’ve got money to spend and you want to start out on a guitar like this, there is no reason not to. It is easy to learn on.

This is a fairly expensive guitar that looks, feels, plays and sounds like an even more expensive guitar. In short: it is an exceptional value and that is why it scores a Musicaroo rating of 4.7 out of 5.

Sterling By MusicMan Majesty MAJ100
4.5
$1,099.99
View on Amazon View on Guitar Center
We earn a commission if you make a purchase, at no additional cost to you.