The acoustic vs classical guitar debate has no true winner.

But it has no loser either.

Either type of guitar is a great option for beginning and more advanced guitarists.

Both types have distinct advantages and disadvantages. If you are trying to decide between the two, you want to match the pros and cons to your needs and goals as best you can.

That is exactly what this article will help you do.

To the untrained eye, a classical and an acoustic guitar look remarkably similar, especially if both instruments have the same color. But the two are actually quite different. They differ in build, in sound and in use or purpose of playing.

If you are torn between the two, knowing as much as possible about each type will help you make the right decision for you.

What Is An Acoustic Guitar? An acoustic guitar is a musical instrument that has strings and frets. It produces sound by the vibration of the strings above a hollow chamber in the body of the guitar.

Musicians who play acoustic guitars produce sound using their fingers (for example, by strumming or plucking the strings) or using a pick. Playing type varies, depending on the genre of music and the player’s personal preference.

What Is A Classical Guitar? Classical guitars look similar to acoustic guitars at first glance. But if you look a little closer, you will notice a number of differences.

The most obvious is the decorative rosette design around the sound hole, though this obviously makes no difference in terms of the sound or playability. But it’s usually the first first thing people notice.

What does impact the sound are the strings. Classical guitars generally use nylon strings, which produce a richer, warmer sound. In addition to the different strings, you might also notice the shorter neck and the wider fretboard. Let’s take a closer look at all of the differences.

The following are all the ways an acoustic guitar and a classical guitar differ. 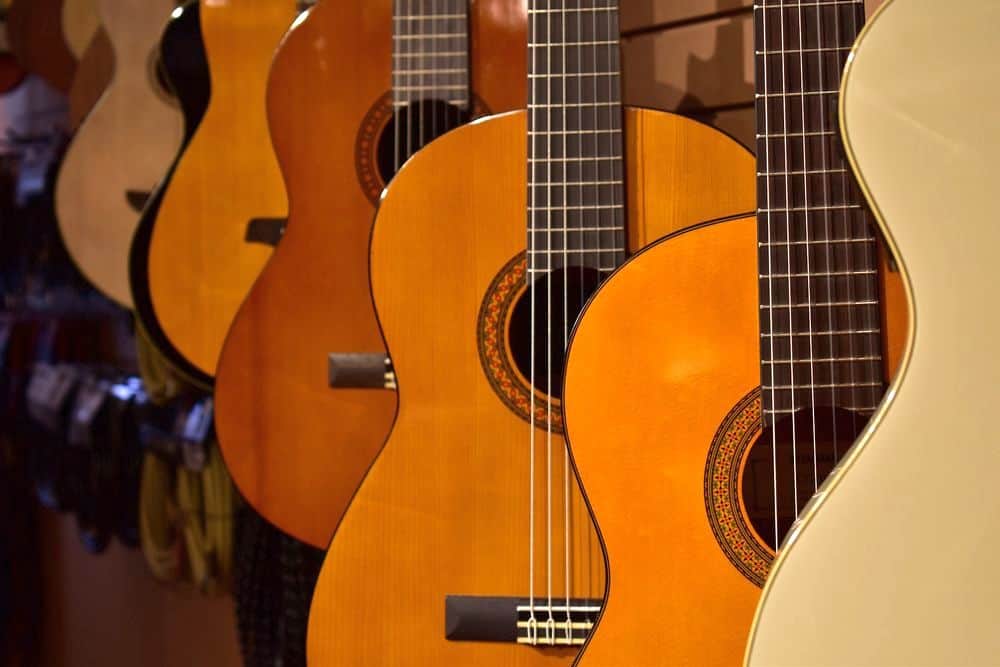 Bigger and wider sides, usually means that they are a bit heavier than classicals. Check out the Yamaha F335 for a good example of an acoustic guitar.

Most classical guitars, especially concert ones, are full-bodied instruments. They do not have “cutaways“, which make access to the guitar’s upper frets easier.

Instead, to accommodate for the lack of easier access to the upper frets on classical guitars, modern luthiers (stringed-instrument makers) adopted new designs on classical guitars—including elevated fingerboards. Of course, Stauffer was already doing this on some guitars back in the nineteenth century. 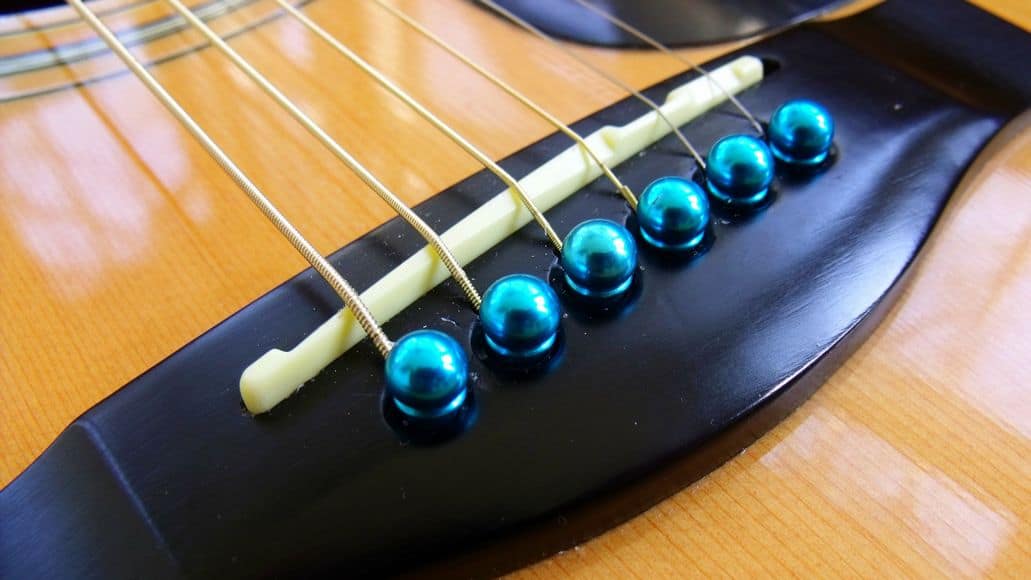 Another notable difference between acoustic guitars and classical guitars is how the strings are fastened at the end of the bridge.

On acoustic guitars, the strings are usually held in place using bridge pins, since the strings have little balls on the end. The bridge pins can make a difference in a guitar’s sound.

On the other hand, classical guitars have strings that are tied at the bridge. As a result they require a very different method of changing strings.

Acoustic guitars have radiused fingerboards, meaning that they have a slight curve.

Most classical fingerboards are flat. 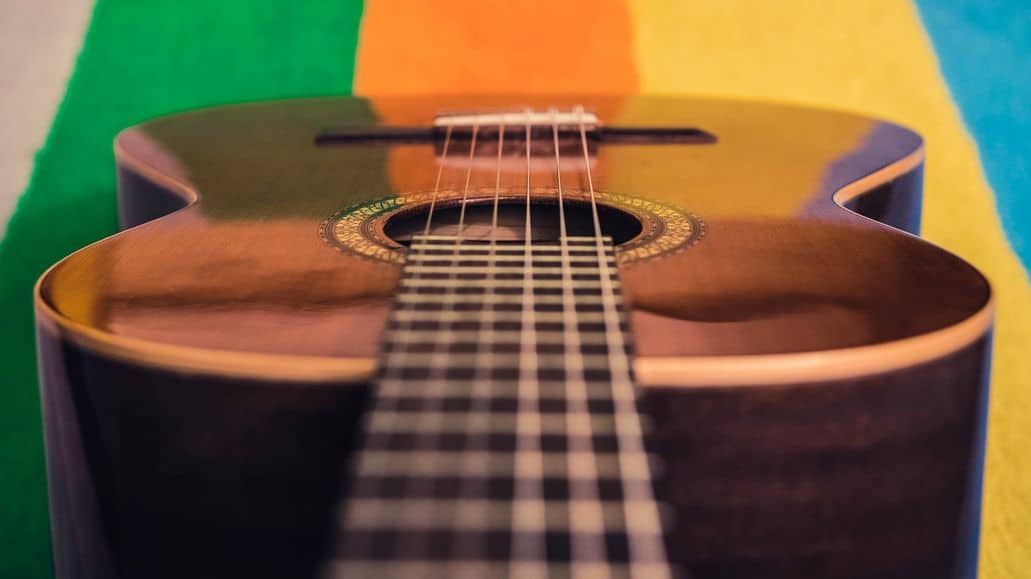 If you have seen an acoustic or electric guitar, you may have noticed that there are dots on the fret board. These dots are called fret markers or fret inlays which serve as a visual aid and help guide your hand to the notes or chords you intend on playing.

Some classical guitars may have dots on frets seven and twelve (and in some exceptions, on areas on the upper side of the guitar’s neck). But, in general, classical guitars usually do not have any fret markers on the fingerboard itself.

Acoustic guitars have individual tuning machines that stick up through the headstock. This difference between acoustics and classical guitars means, once again, that changing strings requires a different technique for each type of guitar.

Acoustics have narrower neck profiles than classical guitars. A narrower guitar neck makes it easier for the fretting hand and fingers to get into various chord shapes.

Classical guitars have wider necks. This makes it easier to achieve accurate finger placement (especially all four fingers at once) on the fretboard when playing different notes in rapid succession. 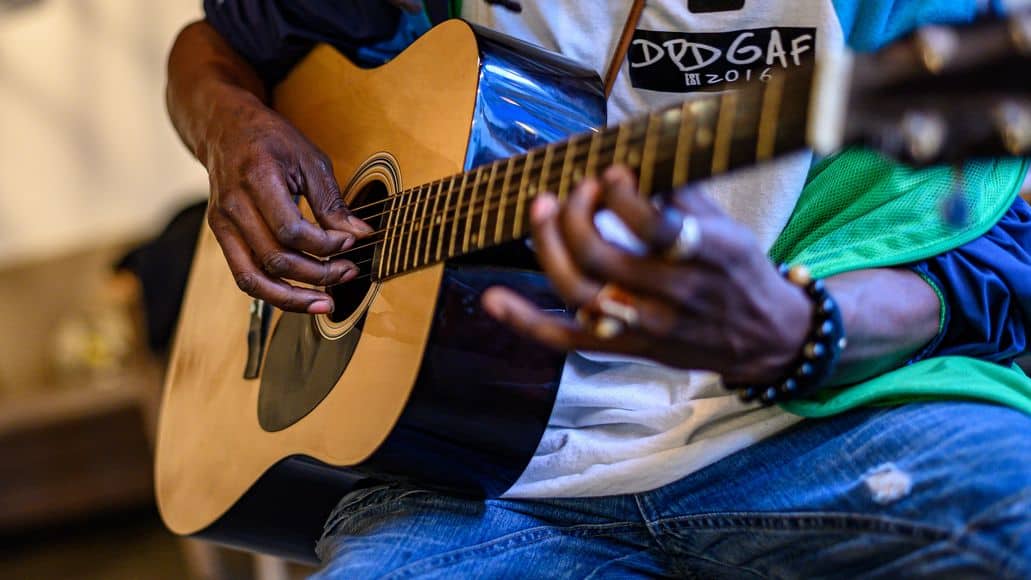 In general, guitarists use different approaches when using the right hand to play the two types of guitar.

Guitarists who use acoustic guitars tend to play music using either a finger pick or plectrum.

Classical players do not use picks or plectrums but rely on using bare their fingernails to make music on a classical guitar.

Which approach a guitarist uses to play the strings is basically dictated by the style or genre of music they play. That means that some musicians use a pick on a classical guitar, and there are also plenty of cases of musicians not using a pick on an acoustic. 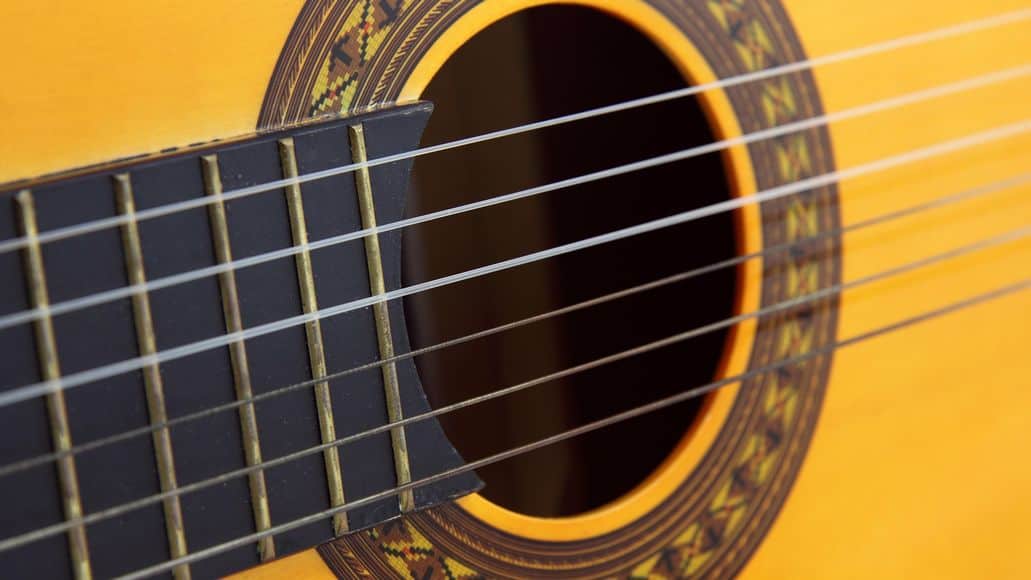 Let’s say you put nylon strings on an acoustic guitar or steel strings on a classic (which you should never do because it might damage the instrument). The guitars would sound completely different than they do with their regular strings and they would, in fact, each sound closer to the other type of guitar.

Because of the noticeable differences in string type and consequently string tension, acoustic guitars and classical guitars differ in their volume. Acoustics are generally much louder than classicals.

That said, modern guitar making techniques have vastly improved over the century, so the volume capability of newly built classical guitars has changed. But they are still generally quieter instruments than acoustics.

We already know that an acoustic guitar and a classical guitar basically look alike at first glance. Obviously, they have a number of similarities. Most of them can easily be identified even by a new guitar player.

Acoustic guitars have a number of advantages over classical guitars.

Although classical guitars may be less popular than acoustic guitars, they are still a good option for those who are interested in learning the guitar. They are a great way for aspiring guitarists of any age or skill level to improve, work on, and master playing technique.

Here is a quick review of what’s better about classical guitars.

Who Should Get An Acoustic Guitar (And Why)? 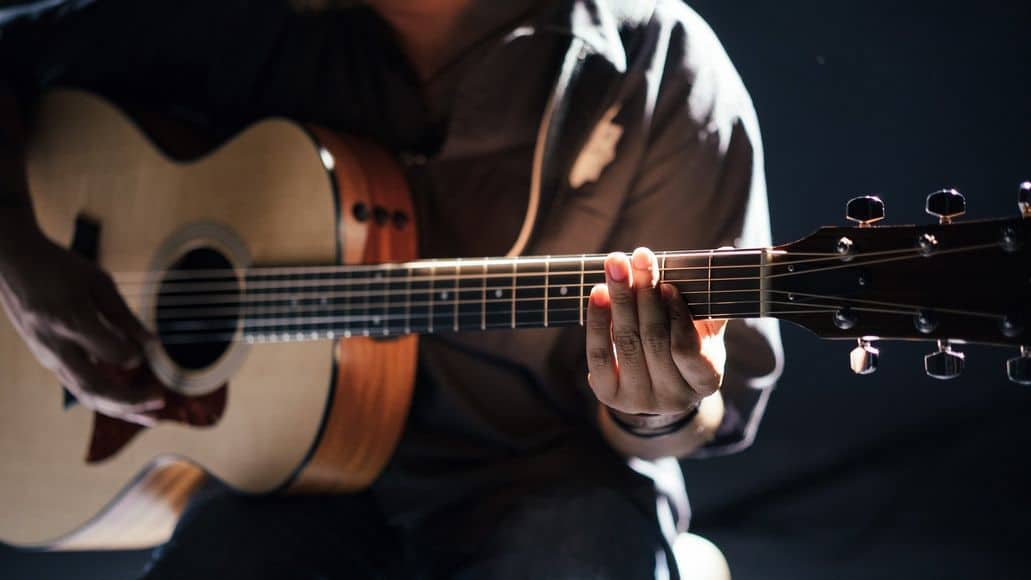 The strings on an acoustic are harder on your fingers, but the narrower fret board makes it easier to play for those with small hands. If your hands are small, you are probably better off with an acoustic. Otherwise it really depends.

As a guitarist, if you prefer the modern type of feel when you play the guitar, you can go with an acoustic guitar, it will give you more opportunity to experiment with modern styles of playing and songs and try other new things.

Who Should Get A Classical Guitar (And Why)? If you plan on playing classical styles, go with a classical guitar. That said, it is not used only for playing the classical genre of music. You do not need to play pieces such as Astor Piazzolla’s classical Libertango or Johann Sebastian Bach’s Bourrée in E minor on your guitar all the time.

You can use your classical guitar to play many different styles of music like jazz, pop, or rock. If you also want to learn traditional, Latin, or folk music without any additional modern-like sound effects, a classical guitar may provide a purer and clearer sound. That said, many folk rock bands, like Mumford & Sons, use acoustic guitars.

Finally, if you are on a strict budget, a classical guitar might be better, since they tend to cost less.

Classical Guitar Vs Acoustic: Which Is Right For You?

After reading all of the basics of both acoustic and classical guitars, you have no doubt realized that there is no actual “best” choice. It depends on a number of factors.

If you can’t decide between the two, weigh your options carefully and figure out which one offers more advantages. But don’t overlook fun. Which type of guitar is going to make your playing more fun? That is often overlooked, but perhaps the most important consideration of all.

Your instrument should inspire you to pick it up and practice, if you ever want to successfully learn how to play the guitar. In the end, that’s what really matters.