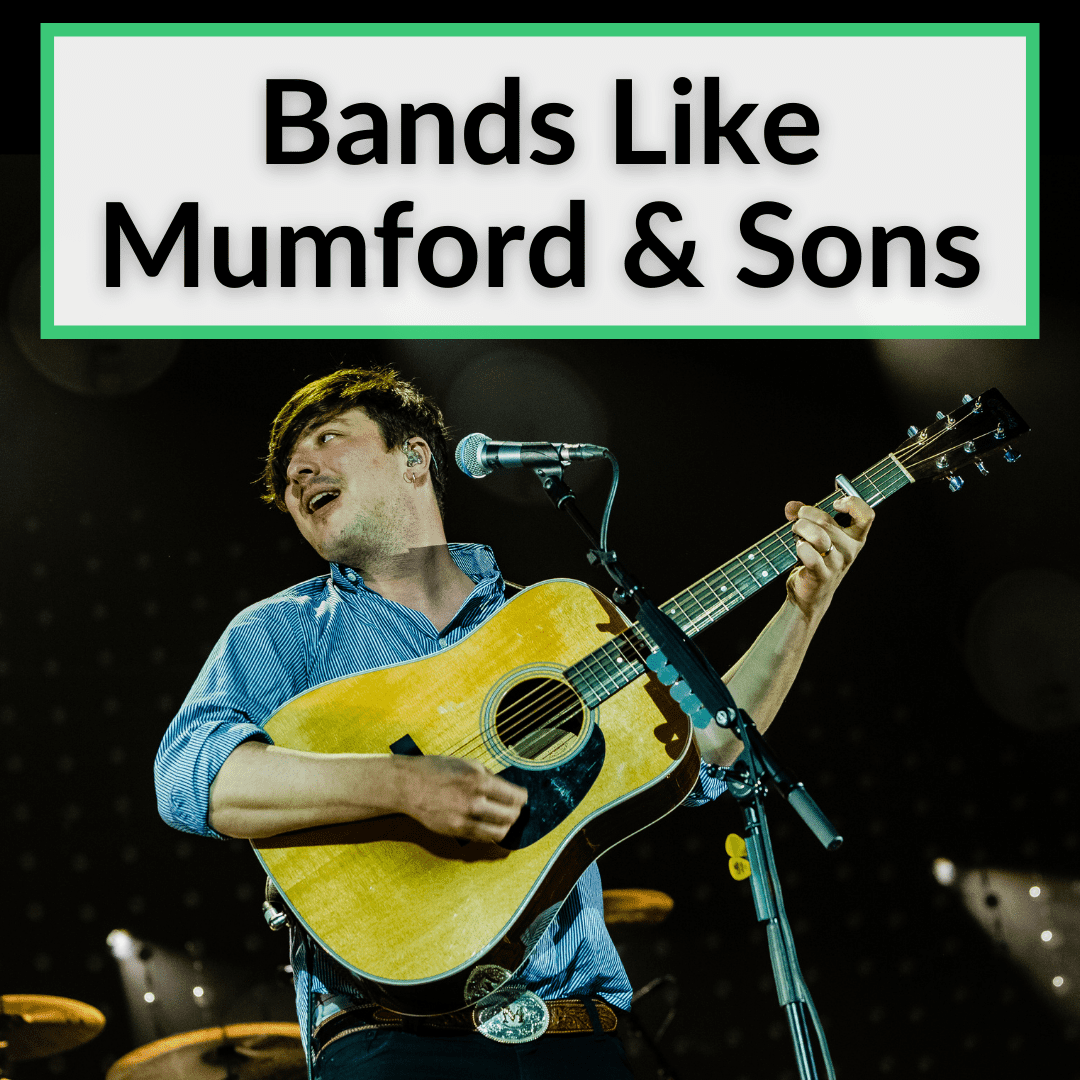 Mumford & Sons took England by storm with their debut album back in 2009.

The rest of the world soon followed.

Their mix of folk rock sound with lyrics influenced by literature seems to appeal to just about everyone.

Naturally, the folk roots mean there have been plenty of bands like Mumford And Sons in the past.

There are also some great new bands with a similar sound.

Even though the comparisons with other groups such as Mumford & Sons do not stop, Jeremiah Fraites thinks the quality of the songs is more important than labels and genres.

With the aim of joining beautiful melodies with interesting lyrics, The Lumineers surprised us with songs like Submarines or Stubborn Love. They have an intense, almost epic, tone, but always with a romantic and youthful nuance.

Also, songs like Classy Girls or Big Parade show us that their fusion of melodies goes beyond folk music.

Friends since they were children living in a small town in New Jersey, Jeremiah Fraites and Wesley Schultz suddenly decided to move to distant Denver, Colorado, to continue their music.

In Denver, they met cellist Neyla Pekarek through an ad portal, and much later they were completed with a pianist Stelth Ulvang and bassist Ben Wahamak. But since 2005, The Lumineers were already touring all kinds of clubs and bars in search of an opportunity on stage.

The Lumineers hit the stage in 2012 with their self-titled debut album, a work that became an unexpected hit and went platinum in the United States.

The Head And The Heart

The Head And The Heart is perhaps a lesser-known band than The Lumineers, but no less similar to Mumford & Sons.

They do not try to discover anything new. they simply seek to find a point of sound cohesion between the 6 musicians that make up the group: Charity Thielen, Jonathan Russell, Josiah Johnson, Kenny Hensley, Tyler Williams.

And they find it! The melodic folk progressions and vocal capacity that flow like a river is what makes us adore this band. Yes, the band is not perfect to some, but we cannot ignore how funny and daring they sound.

The debut album has had such an impact that in just one year those guys (and girls) from Seattle have gone from being unknown to opening for bands such as Vampire Weekend.

Their indie-folk music hits the listener so hard that they automatically get teleported to a burning bonfire located in one of the lush forests of the Pacific Northwest.

Arguably the most famous band on this list, Passenger definitely has songs that sound much like those from Mumford & Sons.

Michael David Rosenberg was the co-founder, as well as the lead vocalist and songwriter for many of the songs by this musical band. The English singer first founded the band in 2007 with Andrew Phillips with the album Wicked Man’s Rest.

But in 2009, it was Michael who, starting his solo career, continued with the name Passenger from that moment on.

The band falls within the folk-rock genre and has gained great success, having concerts attended by thousands of fans. Proof of this is that most of their albums have become platinum, not only in Great Britain but also in other countries in the rest of Europe such as Sweden, Switzerland, Belgium, etc.

Even in Africa, they know this music and many people attend Passenger concerts. Whether with a band or solo, Michael is still widely recognized and always at the top of the charts in many countries.

Of Monsters And Men

The name of the band, as well as the country from which it comes (Iceland) certainly don’t give us an impression that they sound similar to Mumford & Sons.

But the musical style of Of Monsters and Men fits between indie-folk and folk-pop, where the melodies of the instruments are intertwined with stories. A good example is Little Talks, one of the greatest hits from the group’s first album.

The five of them took the world by surprise and with their first album My Head is an Animal. They managed to position themselves at the top of the charts.

The group was formed in Reykjavik in 2009, which is also when the members met. And although they all had personal projects in the beginning, they saw that they had very good chemistry and decided to participate as a group in a well-known musical contest that takes place every year in the Icelandic capital.

The group of course needed a name, so it was “Raggi” who came up with “Of Monster and Men”, a title that he had originally intended for a fictional comic. The name ended up fitting in perfectly with the stories, lyrics, and compositions of the group.

Originally from Michigan but settled in Los Angeles, Lord Huron is a band whose essence lies in the lyrics of their songs.

Such songs have a particular narrative about great survival adventures in overwhelming nature, usually from the wild West. The style of music is, of course, country/indie rock, much like Mumford & Sons.

The name of the band is inspired by Lake Huron, which Ben Schneider, leader and founder of the group, used to visit in his childhood and where he spent his nights playing music around the campfire. Other members include Mark Barry, Miguel Briseno, and Tom Renaud.

In his music, Vance Joy manages to create an atmosphere of emotional nudity. In art, love has been treated in a thousand ways, and Joy chooses to make intimacy visible over aesthetics.

We can see how many singers in the current scene present their feelings. However, the Melbourne man speaks both of romantic love and friendship without any kind of artifice or metaphor.

His only weapons and companions on stage are the strings: those of a ukulele or a guitar. Only these and his sweet voice are necessary to silence crowded stadiums. Riptide, his first single, started his road to fame.

The public felt this song like something from heaven and it began to circulate around the internet like wildfire. Riptide has more than 700 million views on Spotify, a figure that seems large now, but will surely keep growing and seem small in the future.

Much like Mumford & Sons, The Strumbellas gained fame overnight with their indie-folk music. Since releasing their self-titled EP in 2009, The Strumbellas have grown into an indie behemoth, with four albums and a folk-leaning pop that took them to festivals like Bonnaroo and Lollapalooza.

Their third album Hope was released in April 2018 and catapulted them on the top with the single Spirits. It reached the top of the “Billboard Alternative Songs chart” and won the best single of the year award at the 2017 “Juno Awards”.

Due to Simon Ward’s depression problems, The Strumbellas don’t know when they will play in front of their fans again, but there is optimism surrounding the single Greatest Enemy.

They are willing to talk about mental health because it has impacted everyone in the band. The band, apart from Simon Ward, includes David Ritter, Jon Hembrey, Isabel Ritchie, Darryl James, and Jeremy Drury.

The rigors of the music industry affected everyone and this year has been tough for the artists, producers, engineers, and crew.

Listening to the British indie-folk band Bear’s Den will induce similar emotional responses as when listening to Mumford & Sons.

Although in its beginnings there were three, today the band is made up of only Andrew Davie and Kevin Jones. The band has unlimited capacity to move people, both with their stories and with their music.

The beauty of their approach lays in their songs and their voices, and in the intensity with which they strangle hearts. This has been demonstrated over time, with four studio albums.

Formed in London in 2012, they gained great success with their song Agape, which received more than 12 million views on YouTube. Ever since then, Bear’s Den is going strong and in several of their concerts in Europe, they have been the opening act for the emblematic Neil Young.

Noah And The Whale

Noah & The Whale is an English band originally from London, England. The band was formed in 2006, and its music is a combination of indie-folk, pop-rock, bluegrass, and other styles. In several of their songs, you can simply hear the Mumford & Sons style.

Its name came from a wordplay between one of Charlie Fink’s favorite films, entitled The Squid and the Whale, and the director of the film, Noah Baumbach.

They are also fans of director Wes Anderson, who helped produce The Squid and the Whale. The band commonly uses the sentence “Sic transit glory”, a frequent phrase in Anderson’s film Rushmore.

The female voice, in the beginning, was represented by different women, among which were Emmy the Great, Lillie Flynn (daughter of singer Johnny Flynn), and Rebecca Taylor of Slow Club. However, it was Laura Marling who finally took the position for good.

There you have our list of the best bands like Mumford and Sons. Of course, there were many more groups we could have included, but we limited ourselves to the very best in the interest of not making this article super long.

If you can think of some other bands that sound like Mumford And Sons that we should have included, please let us know in the comments below. Do the same if there are any bands on this list that you feel do not belong.