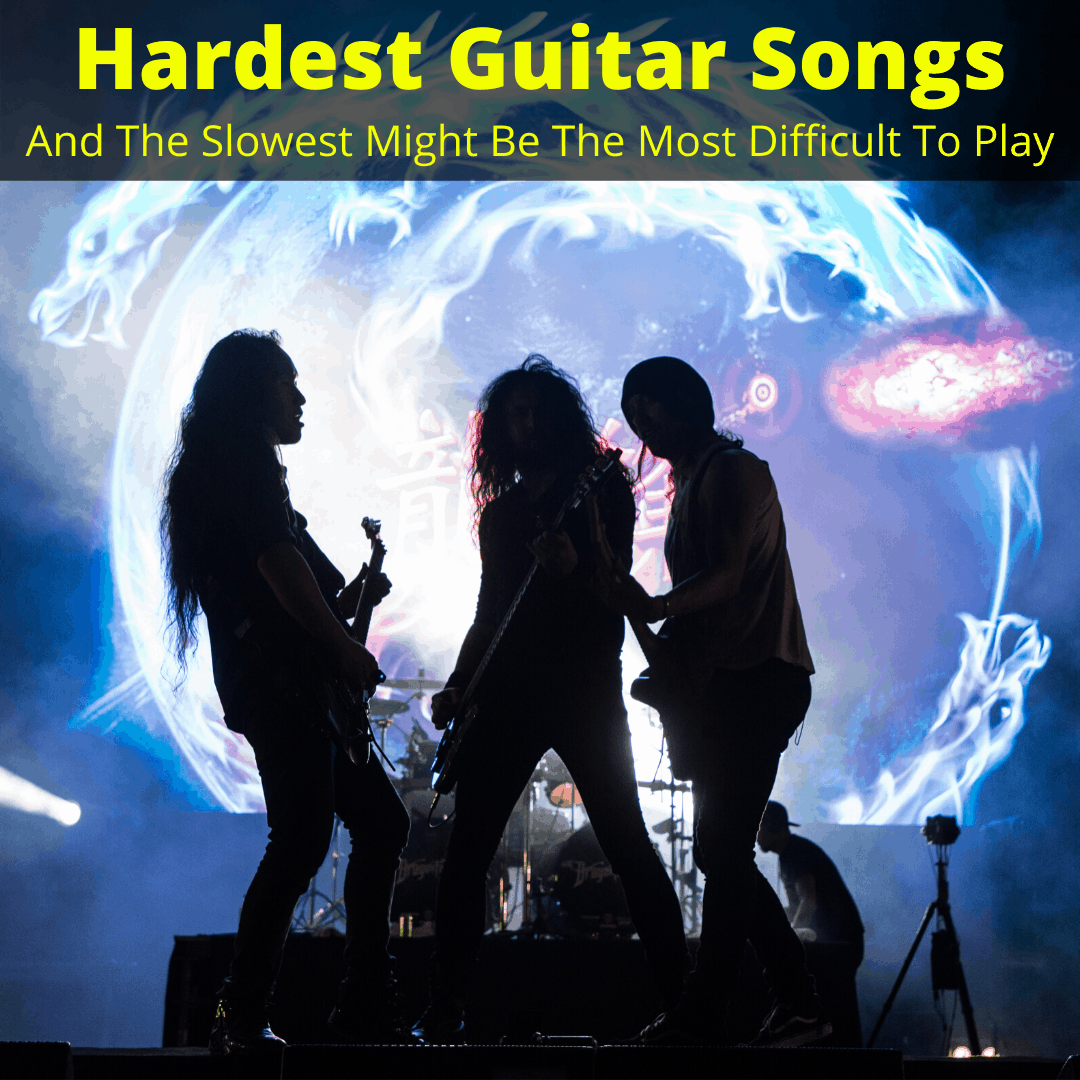 Listing the hardest guitar songs is no easy task.

Different guitarists have different strengths, so what is difficult for one player may be much easier to play for another.

That said, there are some songs that are universally acknowledged as incredibly challenging. No matter your skill level, you will have an exceedingly difficult time playing any of the songs below on the guitar.

If you have the skill and the patience to keep at it, you can learn to play most of them reasonably well.

If you are only just learning to play the guitar, watch the videos below for inspiration, then check out these much easier guitar riffs for a much more achievable challenge.

Let’s get to the songs! In no particular order…

Hardest Songs To Play On Guitar

Through The Fire And Flames by DragonForce

If you want straight-up shred, DragonForce is the right band for you. The legendary power metal band is led by Herman Li who is well-known for his impeccable technical skills as well as some unusual techniques that he uses to create unique sounds.

His ultimate masterpiece is Through the Fire and Flames from their 2005 album Inhuman Rampage. What makes this song so hard?

Well, both rhythm and lead sections are written with a lot of 16th and 16th triplet notes, all of which are played at around 200 beats per minute. It’s just mind-blowing how someone can even pull this off. The solos are some of the hardest to play ever.

Scene Seven: I. The Dance of Eternity by Dream Theater

Dream Theater are, by far, the most innovative metal band that emerged back in the 1990s. With John Petrucci doing all the guitar duties, it’s no surprise that all the guitar parts are incredibly. The ultimate challenge for every guitar player is to learn how to play Dream Theater’s “The Dance of Eternity.”

This epic piece is about 6 minutes and 15 seconds long, but it features no less than 108 time signature changes. Combine that with some of the fast guitar parts, and you’re in for a treat. And in need of the best guitar picks you can find, so you can get down to shredding

Compared to many other “shred” type of players, Petrucci also adds some very intricate rhythmic patterns, making things even more difficult. You also need to bear in mind that this tune is performed on a 7-string guitar.

There is a reason he is always on those “best guitarists” lists and unlike many of the overrated names on the lists, who should probably be replaced by some of these extremely underrated guitarists, Petrucci belongs there.

CAFO by Animals as Leaders

Just when everyone thought that the guitar simply cannot be taken to a whole new level, Tosin Abasi came about to prove them wrong. Playing his extended range guitars, he has not only implemented new innovative techniques but also written some pretty unusual progressive metal pieces.

Usually labeled as a “djent” band, Animals as Leaders is at the forefront of the innovation in modern music. We included them in our list of bands similar to Polyphia. For this list, we’re including the band’s CAFO from their 2009 self-titled debut album.

Both rhythm and lead sections are really tricky to pull off. The riffs are written in an unusual way, with some very complex rhythms. Additionally, the lead section is filled with a ton of sweep picking parts.

To put it simply, CAFO is the ultimate sweep picking challenge. And there are plenty of other complicated elements as well. This song will take a long time to learn for even the most skilled guitarist. And most will never be able to pull it off.

Cliffs of Dover by Eric Johnson

Going back to 1990, Eric Johnson was one of the first guitar players to add a more modern approach to the old school blues style. Cliffs of Dover is his most popular piece.

Compared to some of the other most difficult songs to perform on the guitar, this one sounds a little softer. Clearly inspired by blues music, Eric Johnson adds his own stamp into this instrumental track.

In order to perform it properly, you need to be skilled with alternate picking, string skipping, chicken picking, and other techniques. And let’s not forget that it’s filled with many changes, making it even more difficult to remember.

There’s no other guitar master out there like Guthrie Govan. It’s no wonder that many consider him to be the best guitar player of all time. Whether this is true or measurable in any way, he’s definitely going down in history as one of the most skilled guitar players.

If you’re planning how to play this instrumental prog rock piece, you’ll need to physically train and stretch your fretting hand first in order to perform some of the fretboard gymnastics. This is beyond shredding and the song is just all over the place.

Here we have kind of a different piece on our hands. One of the biggest innovators of modern music, Robert Fripp has written some of the most complex pieces ever known and all are quite difficult to pull off. He was a huge influence on the band Tool.

If we’re talking about the hardest guitar songs, we have to mention Discipline from the 1981 album of the same name. In this minimalistic song, Fripp and Adrian Belew perform a great number of variations of the original theme, all while doing some complex polyrhythms along with the bass and drums.

What’s really amazing is that Fripp and Belew play in two completely different time signatures throughout most of this song, yet it all feels like it’s in perfect sync.

These polyrhythmic games are exactly what makes King Crimson’s Discipline so difficult. We can easily bet that those classic metal “shredders” wouldn’t be able to pull it off.

Symbiotic In Theory by Necrophagist

With the abundance of extreme metal bands, it sometimes gets hard to filter out the stuff that you might like. However, Necrophagist, led by Muhammed Suiçmez, was something else. The band’s unique style could be defined as technical death metal.

In Necrophagist’s song Symbiotic In Theory we can hear many different progressive elements, including  many difficult guitar parts. The song is all over the place and involves the use of complex guitar techniques, all performed flawlessly by Muhammed Suiçmez. You will definitely need a good metal guitar for this one.

While we’re on the topic of extreme metal, it’s hard not to mention one of the death metal pioneers: the almighty Cannibal Corpse. Coming from their album The Wretched Spawn, the song Frantic Disembowelment must be on this list.

Although it is under three minutes in length, the song features a tempo that’s just over 230 beats per minute. Meanwhile, the riffs and all guitar parts are completely dissonant and sound out of place while they also feature a lot of triplets and 16th notes.

It might not be that hard to learn some of the parts, but if you want to perform them the right way at the song’s original tempo, you’re in for a big challenge. Jack Owen and Pat O’Brien really outdid themselves on this one.

Far Beyond the Sun by Yngwie Malmsteen

Eddie Van Halen was probably the first guitar player to really shock with his playing skills. Yngwie Malmsteen took Eddie’s playing, combined it with his love of classical music, and pushed his amazing electric guitars to a whole new level.

What we now know as neoclassical metal was started by Yngwie back in the 1980s. His 1984 debut album brought us Far Beyond the Sun, which still remains one of his biggest songs. It has also earned a reputation for being one of the most challenging guitar songs of all time.

While the song’s intro might not be that complicated, it takes no more than 15 seconds to get to the tricky part. The entire song is filled with intricate alternate picking shredding parts, along with an insane amount of sweep picking arpeggios. In addition to this, it’s even harder to make it sound exactly like the original, because Yngwie Malmsteen has a very unique vibrato.

When Andy McKee appeared in the early 2000s, it was almost unimaginable to see someone play the guitar the way he does. While the standard tapping technique wasn’t anything new, with masters like Eddie Van Halen, Joe Satriani, and Steve Vai taking it to a whole new level, McKee made it sound is if there were two or more instruments playing at the same time.

His piece called Drifting was a major success and it showed new ways an acoustic guitar can be implemented in making music. The most problematic part here is that you need to do percussion parts with both hands while also hitting on the fretboard.

Aside from these parts and the incredible coordination they require, most of the song is played with a two-hand tapping technique that’s combined with some percussive parts. It’s not only about learning this song, but it’s also about being skilled enough to even wrap your mind around it.

Tornado of Souls by Megadeth

Megadeth has always been at the forefront of innovation in rock and metal music. Though they get labeled a thrash metal band similar to Metallica and not progressive metal, they always added new innovative elements to their metal style.

Led by Dave Mustaine, Megadeth also had some of the best and most skilled musicians ever. Their 1990 album features none other than Marty Friedman who is one of the most skilled and most respected guitarists of all time.

Coming from this classic album, the band’s staple song Tornado of Souls features some of the most complicated guitar parts in the history of this instrument. And it’s Friedman’s guitar solo that poses the biggest challenge here.

It starts off as a somewhat bluesy lead section and then turns into a real shredfest filled with many extremely precise bends and vibratos, as well as alternate picking and sweep picking passages. You’ll need tons of practice to pull this one off!

What did you think? Can you play any of these songs? And do you agree with our choices of the hardest songs to play on the guitar? If not, what songs do you find more difficult to learn? Please let us know in the comments below!