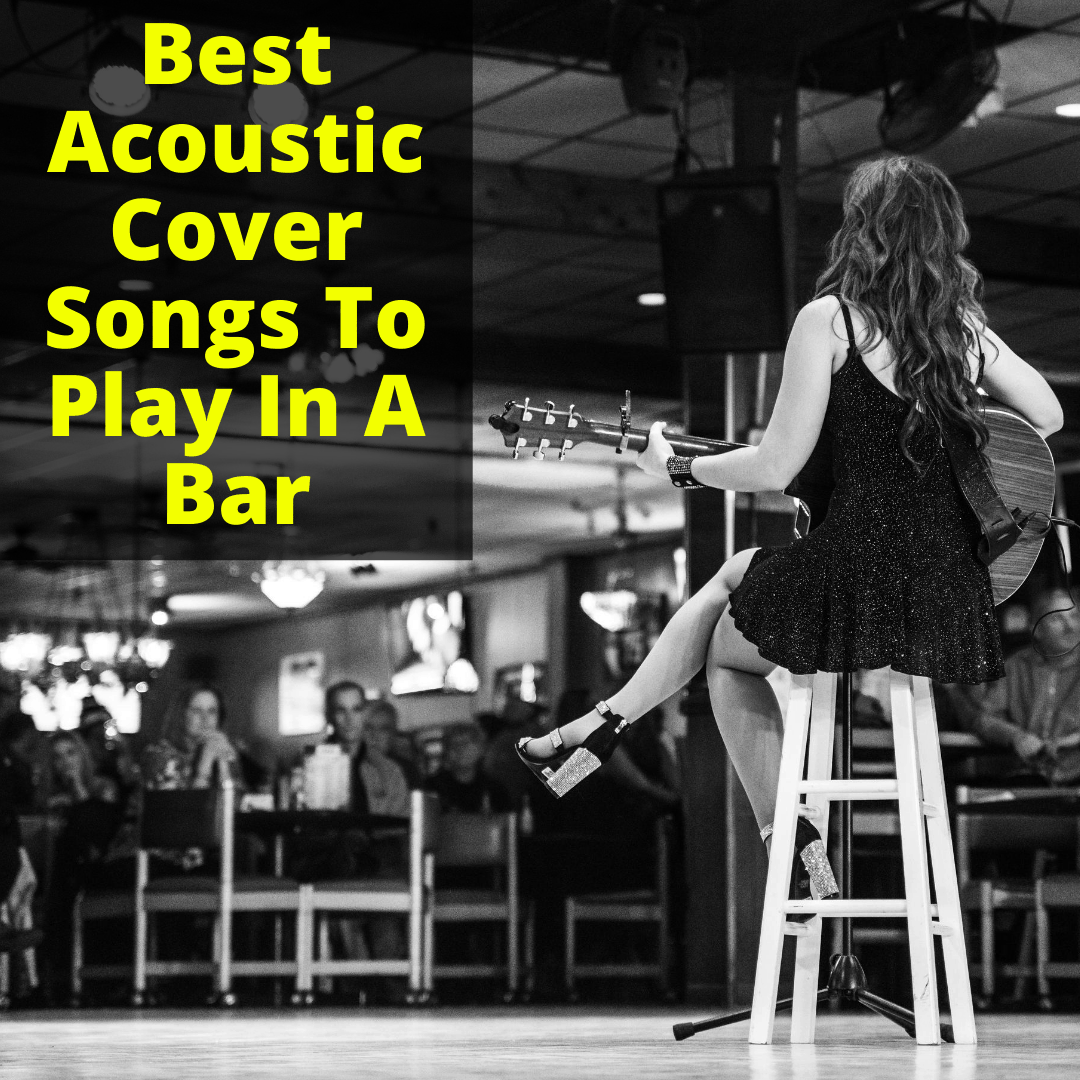 So you got a great acoustic gig at a local bar!

But now the big question: what songs to play?

The best acoustic cover songs to play in a bar should not be overly difficult, should be instantly recognizable and popular enough that anyone can sing along.

You don’t want people to groan, because every song you play is expected. That’s why we included a few unexpected tracks below. Check them out and hopefully one, or more, makes it onto your setlist!

Best Acoustic Cover Songs To Play In A Bar

“I bless the rains down in Africa!”, the first of many iconic lines from songs on this list. You’d be hard pressed to find anyone in the bar not singing along to this chorus if you cover this tune, that’s for sure. You definitely know it and if you like it, you may also like Imagine Dragons and similar bands.

Written by David Paich and Jeff Porcaro in 1982, the track is based on Paich’s love for the continent.

Although he had never been there before writing the track, he is quoted as saying “At the beginning of the ’80s I watched a late night doc about the terrible death and suffering of the people in Africa.It moved and appalled me, and the pictures just wouldn’t leave my head. I tried to imagine how I’d feel if I was there.”

Pretty grim, but it inspired a timeless song.

If you pay attention to time signatures, you might think that the timing in the song isn’t the typical 4/4. But it is. However, since the song sounds like it’s in a different time signature, it might take some getting used to when you first start playing it.

With the intro riff, the big build, and the chorus that’s impossible not to join, this is the perfect track to get the bar folk up on to their feet, singing their hearts out.

To get the best response from this song, I highly suggest you make sure your audience has poured plenty of social lubricant down their throats.

But who is the oh-so sweet Caroline? In two different interviews, spanned years apart, Neil reveals the secret. “Caroline” is his then wife, Marcia. Shes the inspiration for his 1969 hit, but Marcia didn’t quite work with the melody – Diamond needed a three-syllable word. Enter a childhood picture of Caroline Kennedy, the daughter of late president John F. Kennedy and Jacqueline Kennedy.

And I’m sure Diamond is glad he saw that picture, because the song was a hit. It spent 14 years on the charts, reaching the height of number 4 on the Hot 100. And it has stood the test of time, being commonplace at every sing along worth its salt.

Save Tonight by Eagle Eye Cherry

Sentimental, but still fun, Save Tonight by Eagle Eye Cherry is the perfect track for that Sunday afternoon buzz. The catchy chorus is bound to get the crowd swinging their arms in time, eyes closed, and singing along.

But it’s just as comfortable an addition to a thirsty Friday afternoon crowd, working their way up to oblivion. And it’s a hit that has generational appeal, too.

This song is so good, that Eagle Eye Cherry couldn’t believe that he had written it. Convinced he had ripped it off, he once said: “When I wrote the riff in the chorus, I was racking my brain, thinking I had stolen it… I thought that someone must have used this because it was too good.”

If you needed any other reason to add this song to your setlist, let it be this: it’s easy. It’s only made up of a four chord combination: A minor, F, C, and G. In that same order, throughout the whole song. It’s a great song to play on a classical or acoustic guitar.  If you’re not sure of the difference, read Acoustic Vs Classical Guitar.

It’s intimate and raw, and a very popular song to cover. So much so that some other very good musicians have taken up the opportunity. John Mayer plays a beautifully intricate version in the video below – imagine playing something similar in a dimly lit pub, silhouetted by cigarette smoke.

And then there’s this version, played as a tribute to the late Tom Petty by Coldplay, featuring R.E.M. guitarist Peter Buck. While this is a full band, and you might just be a solo artist, take from this the fact that this is a favorite, loved as much by bigger crowds as smaller ones.

And there are many other versions out there. With all the variations, you have a wealth of options to draw from as inspiration for your cover.

The lyrics are inspired by the “never-ending scene” of characters Petty saw on his way to the studio down Ventura Boulevard, in California’s San Fernando Valley.

The main riff and chorus though, came about after only one night of writing, and by trying to make Electric Light Orchestra’s Jeff Lynne laugh. As it turns out, Lynne ended up almost producing the song, giving Petty advice throughout the evening – things like cutting a chord from the main riff, and even the iconic “free fallin'” chorus/title line.

Ain’t No Sunshine by Bill Withers

If ever there’s a song to appeal to the lonely hearts brigade, looking for the answers to their sorrows at the bottom of a bottle, then it’s this one. And just judging by the acoustic cover linked here, one that you can really make quite powerful. This is the perfect track to really draw your audience in, if you pull it off.

Withers wrote the track that skyrocketed him to fame after being inspired by the 1962 movie Days of Wine and Roses, about a couple who lose themselves to alcoholism. He does also admit that there might be something from his life that inspired it too, although he is very coy about it.

The iconic “I knows” that Withers croons in the bridge weren’t a stylistic choice. In fact, they’re really the result of the song being unfinished at the time of recording. The “I knows” were supposed to serve as a filler until Withers had written the rest of the lyrics. Good thing he never did.

Hey Ya by Outkast

Let’s move on from the classic rock and blues songs to something a bit more out there. Outkast’s Hey Ya is an early-2000s hit that, if you add it to your acoustic set, is sure to be a winner with crowds across all generations. It’s fun, upbeat, and easy to get your crowd into, to sing along with.

And it’s no wonder you’ll have everyone in the audience singing along – the track was the most downloaded song in iTunes’ first year of existence, and was the first one to ever reach a million paid downloads.

André 3000 says the song isn’t based on anything autobiographical. Rather, it’s just a 50s style, Woody Allen-esque humorously honest song inspired by small moments in his life – the line “all the Beyoncés, and Lucy Lius” only came about because he was watching a Beyoncé video on TV while he was writing the track.

No Diggity by Blackstreet, ft. Dr Dre and Queen Pen

Another one that you wouldn’t necessarily expect on an acoustic setlist, No Diggity by Blackstreet is actually a really fun song to cover. And just the fact that it’s not a tune you’d expect an acoustic musician to cover makes it a fresh addition to have in your arsenal.

This track is linked to another artist in this list: Bill Withers. Withers influenced soul, RnB and hip-hop so much that Blackstreet sampled one of his tracks, Grandma’s Hands, for this 1996 number 1 single.

According to producer Teddy Riley, who takes credit for writing No Diggity, William “Style” Stewart suggested the sample. He even said “If he hadn’t played that sample for me, there would never be a No Diggity.”

The most modern of all the tracks to cover on this list, Despacito is sure to be a hit with the younger members of your audience. It’s fun, upbeat, and even features a really cool flamenco style riff in the intro that the more advanced solo artists can have a crack at. It’s definitely a track to add to your set if you want to get your crowd up and dancing.

The song was written quite organically. Luis Fonsi apparently woke up one morning with the melody in his head. He started work on a demo that same day, and added it to this list of 50-odd songs that were vying for a place on his album.

Bieber got involved after hearing it in a club and seeing how the audience reacted to it. He helped skyrocket the track to the acclaim that it has achieved. According to Fonsi, “He recorded in Spanish and added such an important layer to the song that was already known. All of a sudden we had this huge known act singing it, and it opened doors.”

We know this is far from an exhaustive list. There are no songs specifically written for the baritone guitar, for example.

We just wanted to give you a quick list of some great songs that most people know and like, so you can be sure they will go over well with just about any audience. If you have some additional recommendations for tracks that fit that definition, please feel free to let us know in the comments below. We’ll put in our best strings and bridge pins and give them a try!