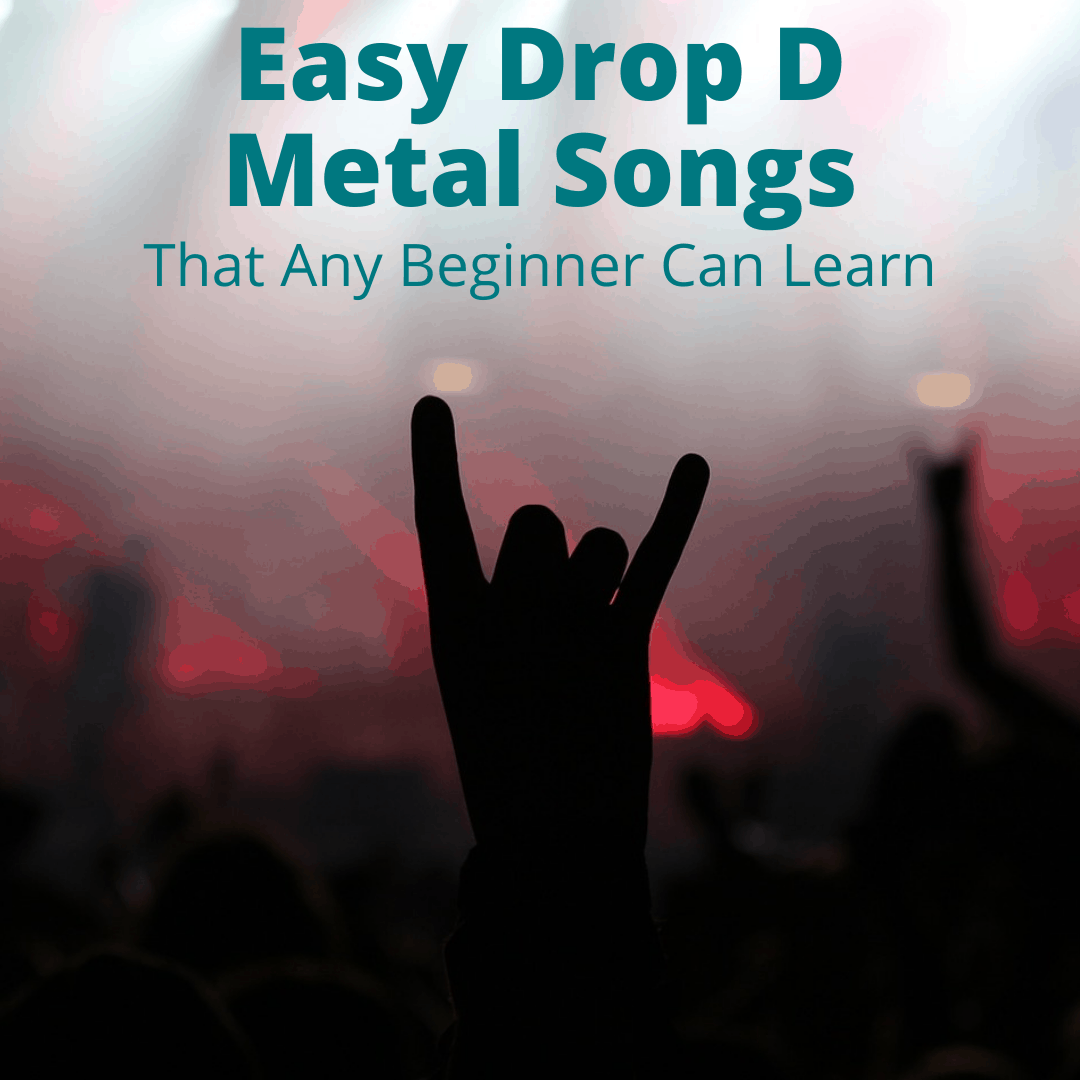 A lot of beginning metal guitarists want to try playing in drop D, but they don’t know which songs to practice.

Obviously, there are a ton of them out there, but you want something that’s easy to pick up, if you’re just getting started. That way you can master a song or two fairly quickly and actually start playing.

But which drop D metal songs are easiest?

That’s what this list is for. We’ve gathered some absolute classics that everyone loves, but that are also quite easy to learn. Take a look at our list and see if there’s something there that appeals to you.

The following songs are all played in drop D and they are all easy to learn on the guitar. So break out your favorite heavy metal guitar and start jamming!

Pantera’s 1992 powerhouse of an album, Vulgar Display of Power, continued the rise that started with 1990’s Cowboys from Hell. It would go on to become one of the most influential metal albums of all time. Walk, the third track off the album, is a large reason for the success and popularity the band achieved.

The song is really easy to play too! The riff is in a really forgiving time signature of 12/8, and to make this an even more beginner-friendly riff, it is built on a base of two notes – open on the low string, and then the first fret (which is D#) on the low string.

Then, to break that riff up, Dimebag Darryl, who played the now famous 0-1 riff during soundcheck, much to the adoration of his band members, throws in a quick double slide, and then a chunkier, pretty groovy lick.

Listening to the track, you should be able to pick up the rhythm quite easily. From there, it’s just a matter of practice.

Journeying over to this side of the millennium, we come to Avenged Sevenfold’s breakout single, Bat Country. It is taken off the band’s third album, City of Evil, which saw the band change their style up quite a lot. We listed them as similar to Slipknot, but they are also very different on most of their albums.

The shift in styles on the third album saw them lose fans – predictably, since some people just can’t get over the fact that their favorite band might want to evolve and change their style. After selling well in the first week of its release, the album’s sales plummeted.

That is, until they went on TRL. They played Bat Country on the show and their lives changed forever. The track, and its odd video, shot them into the mainstream so they could grace the ears of a whole new audience of listeners. And there have been many bands that sound like Avenged Sevenfold cropping up in the years since.

While not as minimalist as Walk by Pantera, this is still a relatively simple track to play. It has far more riffs in its 4 minutes and 10 seconds, but they aren’t anything overly intimidating.

All the notes are placed relatively close together, so you don’t have to stretch your fingers out too uncomfortably. The tempo isn’t extremely quick either.

Once you get the hang of playing the different parts of the song and you can string them all together, you won’t ever feel rushed or like you’re falling behind when you’re playing along to the track or a metronome.

Killing In The Name by Rage Against The Machine

Any list of easy to play drop D metal songs needs to include this all time favorite. You’d be hard pressed to find anyone who fancies themselves a metal head who doesn’t know, let alone like, this classic Rage Against the Machine track. In fact, it’d be difficult to find anyone who listens to music, of any genre, who hasn’t at least heard the track.

Now, nobody expects you to be Tom Morello – the man is a genius and a pioneering guitarist. But that doesn’t mean that you can’t melt faces to this track.

Morello wrote the song’s main riff by accident. He was teaching someone how to play in drop D, and ended up laying down the riff on an old, and in his words “crappy” Ibanez bass.

What makes the song so fun to play, is that it’s just so creative, so groovy, and at the same time, manages to be heavy without relying on the same old metal-guitaring tone we’ve come to expect.

And it’s easy, to boot. The only part that might trip you up is the solos. Not that it’s a hard solo, per se, but you probably won’t have access to the same equipment Morello used, so you won’t get the exact same tone.

My Own Summer (Shove It) by Deftones

Technically, this song is in drop D, but tuned a half step lower (playing it in D, won’t be the end of the world, though). The track is another, slightly heavier, classic.

There is no band like the Deftones, with their unique flavor of heavy music. And that comes through so clearly in this track – the rolling, heavily distorted guitar beneath the desperate vocal line is a staple of these giants.

And the track deserves the praise it got, and the work it did for the band’s success. It was the first of Deftones’ songs to chart, reaching a high of 29 on the UK Singles Chart in 1997.

While the track is quite high tempo, it’s not necessarily difficult to play. The main riff’s chords are all placed relatively close together, with the convenient inclusion of an open chord between the ones that would need a little more stretching.

And to make the track even easier, there’s a whole verse driven by just the bass. This type of thing is one of the reasons they are said to be a band that sounds like Tool.

When you play this track, use it as an opportunity to practice getting creative – what would you do in the open part? Play that, and have fun.

The Beautiful People by Marilyn Manson

Off of Marilyn Manson’s highly-acclaimed second album, Antichrist Superstar, The Beautiful People has proven to be one of the musician’s most famous songs. The album was released in 1996, but both it, and this particular track, are still referenced and very much listened to today.

A lot of the song’s popularity can be attributed to Manson’s unique sound – heavy and industrial, with a tinge of nu-metal, but riddled with poppy, catchy hooks, melodies and lyrics. It’s quite a masterful blend of genres that don’t generally speak to each other too well.

And The Beautiful People is a great proponent of this sound, with huge thanks given to the guitaring. The majority of the riffs bounce between open notes and one chord, giving the song the energy that it has, without a ridiculously upbeat tempo.

It’s a great one for beginners to learn, and it helps you get the hang of the way metal incorporates open notes between other, more emotive ones. And most importantly, it’s a fun song, and even more when you play along to it.

Sonne is one of the singles released off of Rammstein’s third album, Mutter. Released in 2001, the album took around 20 months to create, with the band traveling throughout Europe to record, mix and master.

The lengthy recording duration created quite a bit of tension within the band. During production, guitarist Richard Kruspe apparently became nigh-on tyrannical.

Drummer Cristoph Scheider is quoted as saying, “We reached the limit when it became impossible to mention the name ‘Richard’ without adding an ‘idiot’ or ‘asshole’! It’s strange that there were no personal complaints. But as soon as it came to music, Richard was the last person we wanted to listen to.”

During production, the band invited journalists to listen to early demos of six of the songs that would be featured on the album. Sonne was one of them. Interestingly, the song wasn’t named that at that specific time. It was called Klitschko, because the band had originally written it to be the entrance song for Ukranian (then) boxer Vitali Klitschko.

Like the rest of Rammstein’s repertoire, Sonne is very industrial, with layers of instrumentation throughout. This gives the guitarists room to play with groovy, yet driving riffs. This shines through nicely with the main riff in Sonne. It’s a repetition of a simple chord progression, throughout the introductions and verses, with an easy to strum, melodic chorus.

Assistant to the Regional Manager by The Devil Wears Prada

Ohio metalcore pioneers The Devil Wears Prada released Assistant to the Regional Manager in 2009 as a single from their album With Roots Above and Branches Below. The album peaked at number 11 on the Billboard Top 200; a testament to writing music that you’re happy with, as drummer Daniel Williams alludes to in an interview with Female First.

Williams says that the band didn’t necessarily have a goal in mind in terms of what they wanted the album to achieve, but instead just wrote an album that they liked, and (apparently, safely) assumed others would too. This mindset can be seen in the song titles, too.

Back when they wrote the album, the band weren’t really fans of naming their songs anything too serious, opting for more light-hearted comical titles. Assistant to the Regional Manager is pulled from the classic TV series The Office.

This song is definitely the most difficult of the tracks to play on this list. It’s hallmark 2010’s Ohio metalcore, featuring a higher temp (than the rest of the songs on this list, anyway), complex song structure, and more chugging.

But it’s a great song to introduce you to this style of metal. There’s even a lead section that’s really difficult to play, so you have a new challenge to master, once you can play the rest of the track comfortably.

Some of these drop D metal songs are more difficult to play than others, but none are overly challenging. Unless you are a complete beginner, you should be able to get the main riffs down fairly quickly. The solos are another matter and will take a lot more practice to master. And once you’ve got those down, why not move on to some drop C songs?