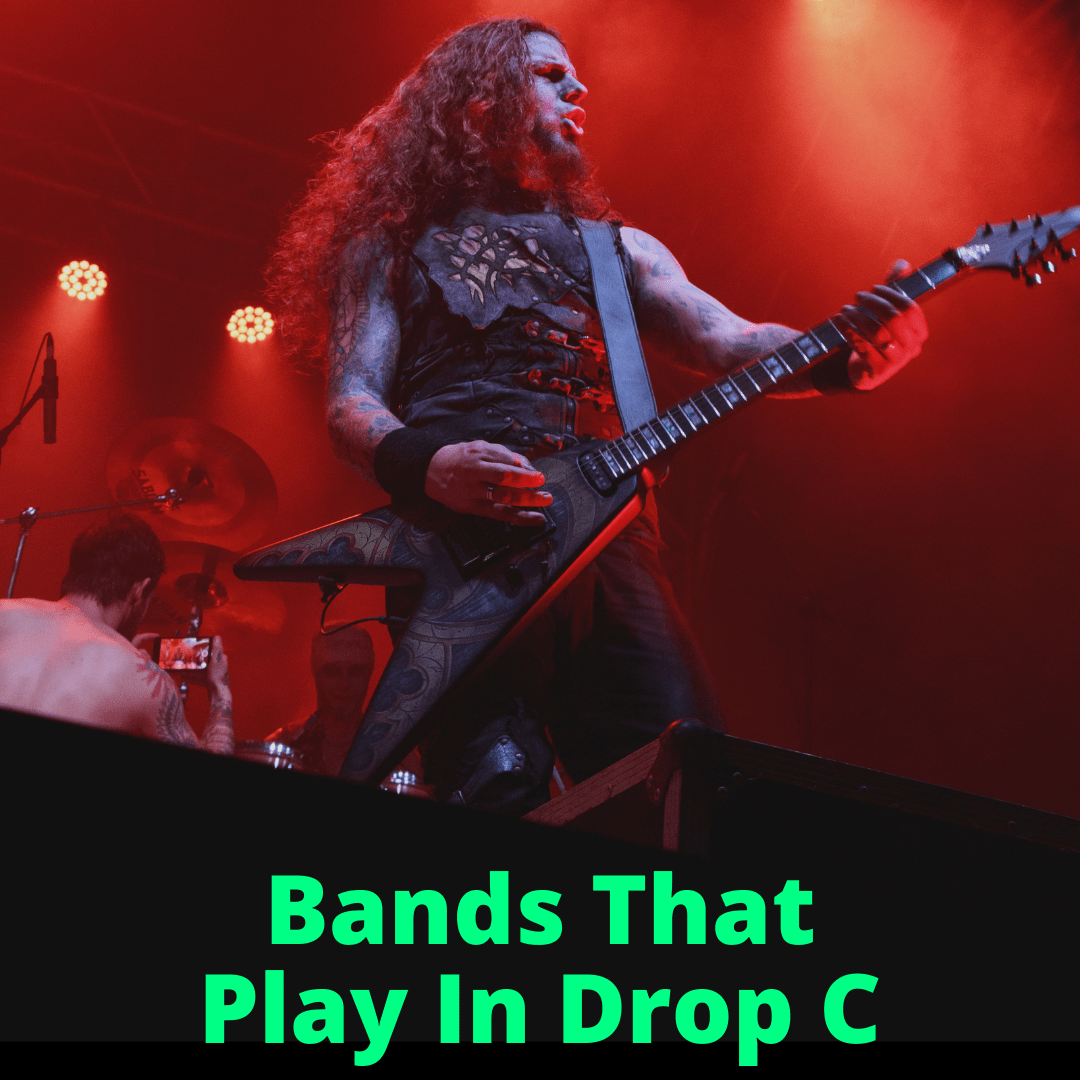 Do you know what drop C tuning actually sounds like?

Most people don’t, which is why we’ve created this list of bands that play in drop C, along with an example song for each one.

You’ll notice they are all metal or hard rock acts.

Drop C tuning is primarily used in these genres, because it lowers the range of your guitar and makes it easier to play power chords. It also better complements a singer with a low voice.

Listen to some of the examples below to see what we mean.

Bands That Play In Drop C

Unlike drop D, drop C requires you to change the tuning on all your strings, not just the lowest one. To tune in drop C, you lower the low E string two whole steps to C. The other strings are lowered on step each, so you end up with C-G-C-F-A-D, from lowest to highest.

Here are some bands that make heavy use of drop C tuning, along with an example song for each.

System of a Down

Back in the late 1990s, everyone thought that metal and rock music reached their peak and that there was nothing new that can be done to take these genres to another level.

But when System of a Down burst onto the scene, they proved everyone wrong with their unusual yet appealing style. Although the band has a relatively modest discography compared to the length of their career, they managed to do a lot for the genre.

When it comes to the guitar and bass tunings, most of their work is in drop C. This fits perfectly with their style and we can hear how it works in songs like Aerials, Toxicity, Prison Song, and others.

In fact, they might be the most famous band to play in drop C tuning, with guitarist Daron Malakian exploring previously unknown aspects of the genre. Simply put, there are no other bands like System of a Down.

Industrial metal music is well-known for the use of drop tunings. Many bands, like Rammstein, mostly use drop D tuning. Ministry is one of the bands that implemented drop C to a greater extent.

And after all, they’re the ones who served as an inspiration for the entire subgenre. Going through Ministry’s discography, The Last Sucker is an album that kind of stands out and where we can hear how effective drop C tuning can be in metal music.

In fact, this heavy guitar sound fits perfectly with the record’s politically-charged theme. For instance, the main riff of Death & Destruction implements fast picking of the open C string, along with additional power chords, making it sound extremely heavy and energetic. Of course, other songs on the album are worth mentioning as well, including Let’s Go, No Glory, and the title track.

Metalcore was another genre, along with nu metal, that surprised music fans in the late 1990s and the early 2000s. One of the biggest bands, if not THE biggest band, within the metalcore movement is Killswitch Engage. These guys further pushed the boundaries of music and delivered a unique style.

As this was a new era in music, they were one of the first bands to use drop C tuning at a great extent. Of course, they implemented standard D tuning as well and have experimented a lot with their approach to writing.

When it comes to their drop C songs, we’d like to single out My Last Serenade as a great example. They also covered Ronnie James Dio’s legendary classic track Holy Diver in drop C tuning, giving the song a completely different twist.

Speaking of innovative bands and artists in metal music, there’s hardly any collective of musicians that can compete with Mastodon. In fact, you won’t find another band that sounds anything like them. They are live a super heavy version of Tool.

The quartet featuring Troy Sanders, Brann Dailor, and an amazing (and underrated) guitar duo of Brent Hinds and Bill Kelliher has taken an unexpected turn into the unexplored territories of metal.

During their career, they have experimented a lot with different tunings, some of which are rather unusual, giving a lot of headaches to those who tried to transcribe their music. But they’ve also used the good old drop C tuning on occasion, as is the case with their best-known song.

Coming from the 2009 album Crack the Skye, Oblivion is still the fan-favorite. Their unconventional writing in this song fits perfectly with the lyrics and the album’s theme, dealing with some difficult topics, like self-harm and suicide. And let’s not forget how awesome their video for this song is.

Going back to metalcore, As I Lay Dying is another example of the game-changing bands that pushed the boundaries of modern music from the early 2000s to today. They also feature in our article on bands like Bring Me The Horizon.

Led by singer Tim Lambesis, the band changed the lineup in their early phases, but finally settled on a stable formation back in 2006. The guitar duties in As I Lay Dying are performed by Phil Sgrosso and Nick Hipa, although Hipa just recently left the band in August 2020.

Their discography is a real feast for lovers of heavier music. Needless to say, they’re also known for using lower tunings, most notably drop C.

Their work includes a lot of exciting stuff, but it seems that fans are very fond of My Own Grave, which was released in 2018 and was later included on their 2019 album Shaped By Fire.

The song is somewhat controversial and is inspired by Tim Lambesis’ crimes and his time spent in prison. In this song, we can hear how well drop C tuning works for outstanding metal guitars in modern metal music.

Bullet for My Valentine

It seems as if we have an abundance of bands that blew up in the early 2000s here. This is not really a surprise as these lower tunings became really popular around those times.

Although known for other approaches to guitars and bass, Bullet for My Valentine is another band that wrote their music in drop C tuning. Widely considered as metalcore, they’re well-known for some of their slightly “softer” stuff, especially in the more recent albums.

One of their most famous pieces Tears Don’t Fall. In fact, this is one of the songs that earned them the status of one of the biggest metal bands of today.

And we could easily say that the drop C tuning in this song is one of the main ingredients that made it so great. Released back in 2006, it’s still a song that both their older and younger fans adore.

Aside from metalcore and nu metal, we also got a new wave of progressive metal and progressive rock bands in the 21st century. What’s more, these bands really pushed the limits of what was previously considered conventional and took not only metal music to a new level, but have also set the standards for other genres as well.

A shining example of modern progressive metal is Periphery – a collective of musicians that managed to implement some previously unheard elements in their music.

They are widely known for extended-range guitars: ones with 8 strings that cover the deep-end baritone guitar territories. They do have songs that are performed on 6-string guitars, too, and those are mostly in drop C tuning.

Listen to a piece like Marigold from their Periphery III: Select Difficulty album. Full of changes and intricate parts, this is one of the most respected progressive metal songs of all time.

While we mostly associate drop C tuning with metalcore, nu metal, and progressive rock, it also finds its way into the more vintage-oriented genre of stoner rock. One of the most respected bands in this movement, Stoned Jesus have a pretty bluesy yet heavy approach to songwriting, somewhat in the vein of an old school Black Sabbath album.

On the other hand, they’re very well-known for their use of the drop C tuning. Their biggest song I’m the Mountain is one of the best examples of how well it fits in the world of stoner rock.

Ggoing back to metalcore, August Burns Red is a band formed back in 2003. Holding a stable lineup since 2006, they’ve released nine full-length albums in total, eight of those with the currently active formation.

Browsing through their discography, most of their stuff was written and recorded in drop C tuning. If we were to choose one song that represents August Burns Red the best, it would be Identity from their 2015 album Found in Far Away Places. It’s also the song that earned them the Grammy award for the Best Metal Performance category.

Continuing the tradition of the groove metal movement, Chimaira became one of the most successful metal bands of the first part of the 21st century. Despite breaking up in 2014, they’re still well-respected among metal fans. In 2017, the band had a classic lineup one-off reunion for old time’s sake.

Coming from this particular era, they’re also one of the bands that used drop C tuning for most of their career. If we were to look deeper into it, a song like Resurrection from the 2007 album of the same name really stands out.

The biggest industrial metal on the planet (often categorized as “Neue Deutsche Härte”), Rammstein have worked with the same 6-piece lineup since their formation in the 1990s.

Earning their fame by releasing some of the most innovative albums in metal, most of their work is in drop D tuning. However, with the release of their unnamed album in 2019, we’ve finally seen them going more with drop C, which they previously only implemented occasionally.

A song from their unnamed 2019 album that we would mention here is Radio, as it features one of the best riffs in drop C that we’ve ever heard. It will make you want to break out your best metal guitar amp and start playing along!

We hope you enjoyed this list of bands using drop C tuning. As you can see, it comes in quite handy in metal music. Of course, you might be thinking: “why not tune even lower?” And you’re right. That would sound great in a lot of heavy metal songs.

However, if you tune lower on a regular guitar, then strings become very loose. If you find yourself regularly wanting to tune down to B, or even lower, you should consider getting a baritone guitar. There are some amazing electric baritone guitars on the market and many great songs that use baritone guitars to achieve a unique sound.