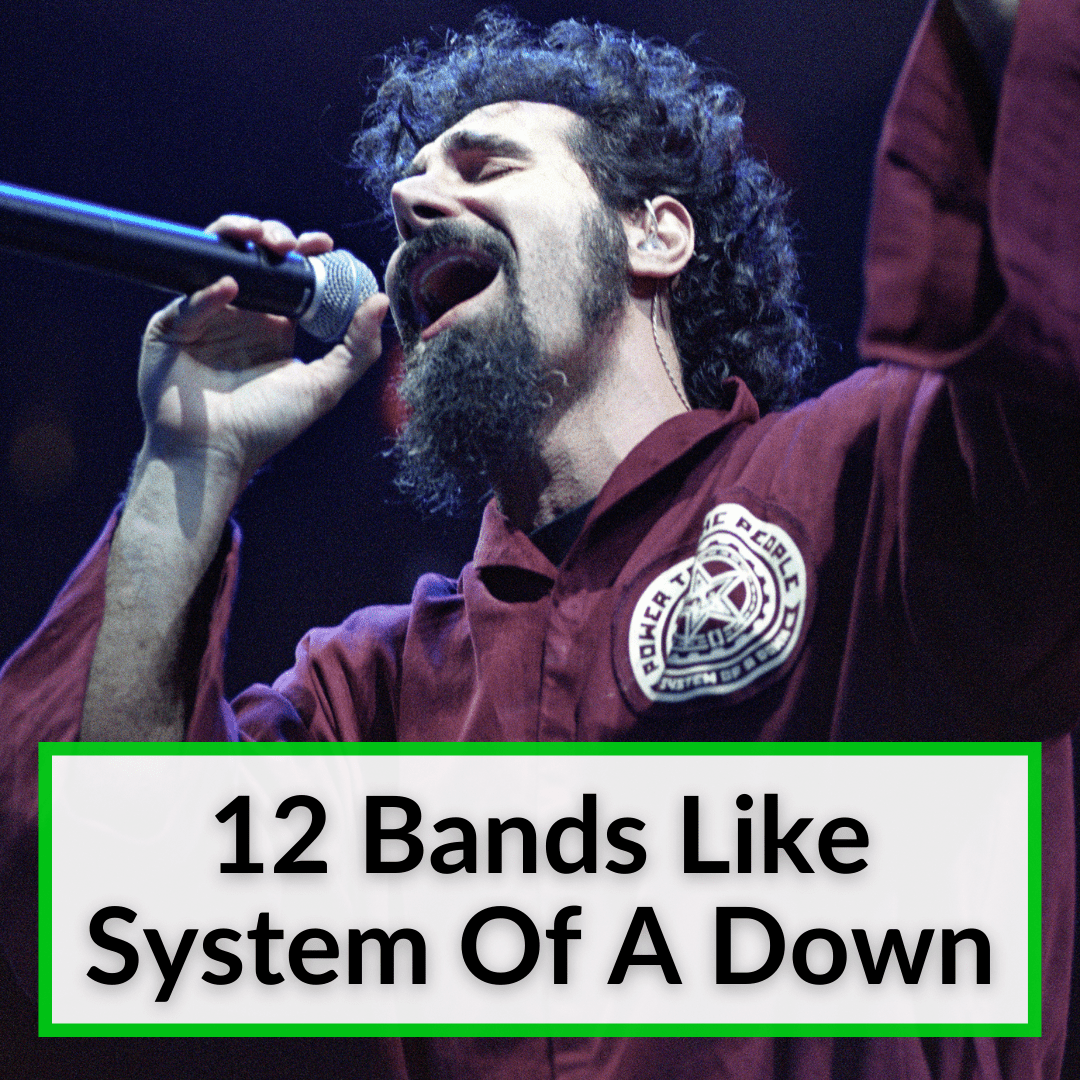 System of a Down is one of the most unique metal bands ever.

It’s basically impossible to make a list of bands like System of a Down, if you’re looking for artists that are virtually identical.

But there are groups that have a number of similarities, even if they differ in sound, style, or something else.

Those are the types of bands you will find below.

All have something in common with SOAD, and all are great bands in their own right.

Daron Malakian And Scars On Broadway

Honestly, it’s pretty hard to find a band that sounds like System of a Down. And none of them are exactly the same. Nonetheless, Scars on Broadway gets as close as possible. After all, this band is a side project of SOAD guitarist Daron Malakian.

And Malakian is the creative force behind most of SOAD’s songs. He wrote the majority of their hits. For a little insight into his creative process, check out our article on the Chop Suey lyrics and meaning.

Officially, the full band name is now Daron Malakian and Scars on Broadway. Aside from Daron on vocals, guitar, and keyboards, the group also featured SOAD drummer John Dolmayan on the drums, Franky Perez on rhythm guitar, and Danny Shamoun on keyboards.

These days, however, it’s Daron with three touring members. Although Daron defined their music as just rock, Scars on Broadway have some similarities with System of a Down. But there are also other elements in there, so they can be defined as experimental rock.

There are only two albums in the band’s discography. The self-titled debut, released in 2008, was more of a metal record. But 2018’s Dictator, gravitated more into hard rock and punk. Either way, you’re going to like both of these albums if you’re a fan of System of a Down.

Avatar is another one of those bands that sounds unique. But you can still notice some similarities with SOAD.

The band is all over the place. You’ll find slower parts, faster parts, steady parts, and some of the most incredible riffs in modern metal.

The group has been around since 2001. Coming from Sweden, they combined Scandinavian extreme metal with metal elements that were emerging during that era.

So just like with System of a Down, it’s really hard to confine them within one subgenre. But we could say that they’re like SOAD with a more European twist. If you like how that concept sounds, then you can’t go wrong with Avatar.

Between 2006 and today, they released a total of eight records and two EPs. While they never reached major mainstream success like SOAD did, they’re certainly not a band to be overlooked.

The best way to start with them would be with 2014’s Hail the Apocalypse album. The song Bloody Angel is probably their most famous.

We know that SOAD’s music can get crazy. For instance, Jet Pilot from the legendary Toxicity album is one of the weirdest songs in metal. But it can’t even compare with the madness of Igorrr.

Seriously, this project by French musician Gautier Serre is unlike anything you’ve never heard before. The most common genre label for his music is just experimental. Nonetheless, there’s a very obvious influx of metal and some songs are more conventional.

Take a closer listen to his piece Very Noise. I guarantee you have never heard a song like it before.

Then there’s also Cheval from the Savage Sinusoid album, which combines extreme metal with dubstep, French accordion music, and a few other styles.

Yes, it’s as crazy as that. But guess what? It all somehow works in perfect harmony.

Now we’re heading over to Tokyo, Japan for a band that’s actually older than System of a Down. Their style is often described as avant-garde metal. However, you can notice some serious black metal elements in there.

If you’re into metal in general, chances are that you haven’t heard about Sigh. Although they formed in 1989 and have been present on the scene since the early 1990s, they aren’t that big in terms of commercial success. But they’re easily one of the most underrated metal bands of all time.

Sigh went through lineup changes and different shifts throughout the years. However, bassist Satoshi Fujinami and vocalist and multi-instrumentalist Mirai Kawashima remain from the band’s original fold.

And they’ve had quite a fruitful career. They have released a total of eleven albums and four EPs so far – and you will find a lot of great stuff in there.

There really isn’t a band out there like Body Stuff. In fact, they’re a super-small band with only a handful of releases on Bandcamp. However, they come as the perfect addition to a list like this one.

Their music combines metal with some unconventional elements. It’s a bit more atmospheric in feel and there are some traits that you wouldn’t expect in the genre.

It’s a great thing to check out lesser-known and underrated bands once in a while. Body Stuff is a great choice for this. There’s not much info available on them, but having this veil of mystery just adds to the excitement.

If you’re looking for some funk elements wrapped in a dark coating, you should add The Budos Band to your playlist.

Now, bear in mind that this isn’t a metal band. First and foremost, they’re into afrobeat, funk, and some jazz and soul. However, there are obvious psychedelic rock elements in there as well.

This group has been around since 2005. There are a total of nine people in The Bodos Band, so it kind of feels like a smaller orchestra. Aside from a guitar, bass, and drums, you can also find an organ, trumpets, saxophones, and even bongos and congas.

They have a total of six full-length records and two EPs, one of which is a live release. The third album, The Budos Band III, is probably the most successful one. We’d advise you to start from there and then move on to other material.

Once again, we’d like to go to Japan and take a closer look at their innovative and very versatile metal scene. Maximum the Hormone is one of the scene’s most successful bands.

They’ve been around since 1998, releasing their debut record A.S.A. Crew in 1999. Over the years, they released three more full-length albums and four EPs.

The most important thing to mention here is that this four-piece is most often compared to System of a Down. Therefore, we’d say that they’re probably the safest bet if you’re looking for bands that sound like SOAD.

Now, Deftones are clearly a bit of a different deal than SOAD. And even though they’re older, both they and SOAD made it big around the same time.

Stylistically, they might be closer to Tool or A Perfect Circle. However, there are also parallels that we can draw between the Deftones and System of a Down.

They’ve usually been categorized as nu metal, since they broke out during the late 1990s and the early 2000s. But it would be wrong to put them into this particular category.

If you’re wondering where to start, 1997’s Around the Fur and 2000’s White Pony are both great records. In fact, they’re metal classics. No matter your music tastes, this is something that you should check out.

Formed in 1996, Mudvayne are one of those bands that you’d like to see put out way more material. Their major breakthrough happened with Dig, a song from their debut full-length album L.D. 50 from 2000. Not to mention that weird yet awesome video with the early 2000s CGI.

They, unfortunately, disbanded in 2010, leaving many alternative metal fans sad. However, they regrouped in 2021 and will most likely release new music in the coming years. But for now, you can check out any of their five albums and one EP.

Yes, Slipknot aren’t completely like System of a Down. However, no band out there is. But there are certainly some similarities, especially with their early classic material.

Back in those days, Slipknot gravitated towards death metal, adding in some other crazy elements on top of that. Not to mention how awesome their live shows have always been.

Now, if you’re a System of a Down fan and you still haven’t gotten the chance to check out an awesome band like Slipknot, then you definitely should. If you’re a metal fan, their 1999 self-titled debut album and 2001’s Iowa are the easiest ones to get into.

Rage Against The Machine

Combining metal, funk, and important social issues, Rage Against the Machine changed the musical landscape forever. Despite having only four records in their catalog, they did so much, not just for rock and metal but other genres as well.

Aside from some of the lyrical themes, tackling injustice and inequality, we can notice similar musical elements with SOAD and RATM. There’s certainly not a lack of great heavy guitar riffs. And while RATM may not be all over the place like SOAD, you’ll definitely like their stuff.

Although younger and starting off as a metalcore band, Avenged Sevenfold have given their own twist to modern metal music. There’s even some hard rock stuff in there. But most importantly, the band has explored some orchestral elements and arrangements as well.

Although it has a somewhat controversial reputation, The Stage pops up as one of their most exciting albums. There are some obvious progressive metal elements and we’d say that it’s a great choice for SOAD fans.

But the bands listed here all bear some similarities to SOAD. Most importantly, they are all groups that fans of SOAD tend to like as well. As such, we are sure you’ll find at least a few artist you enjoy among them.

If you feel we missed some bands, or if you feel some of the ones we included do not belong on this list, please feel free to let us know in the comments below.