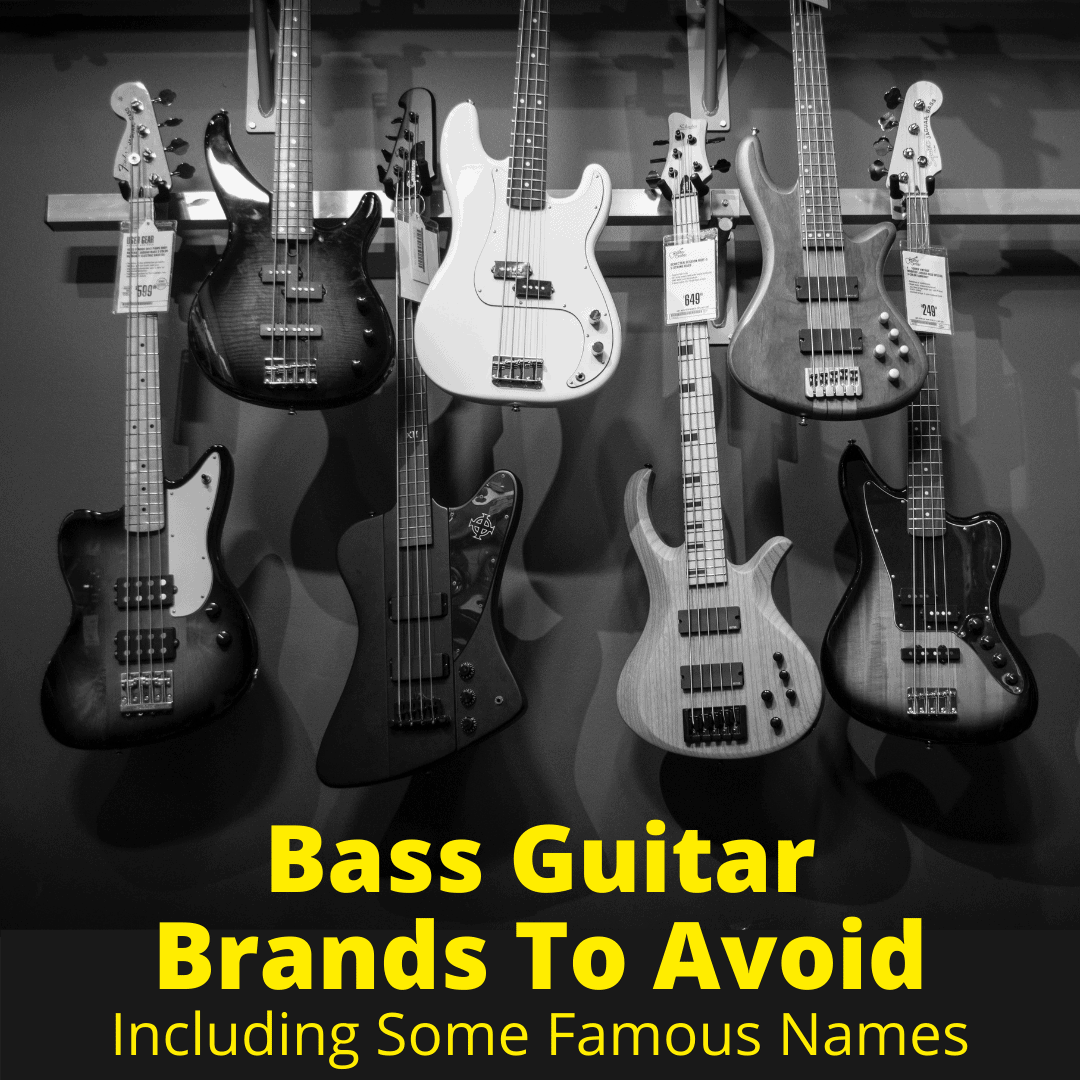 You don’t want to overpay for a substandard instrument.

That’s why we previously reviewed the best basses for your money.

But we thought it could also be helpful to write about the bass guitar brands you should avoid.

These are brands that don’t impress for a variety of reasons: some make poor quality basses, while others make great instruments, but are simply too expensive for what you get.

That means you’ll find some pretty famous brands listed below.

Some of these brands are great, but they’re just not a great value.

J&D has been present on the market for a while. They mostly target beginners and intermediate players who are looking for budget-friendly solutions.

They also began making different types of hollow-body guitars, as well as acoustic guitars, ukuleles, and plenty of other models.

Their collection also includes some interesting bass models. At least they seem interesting at first, until something goes wrong.

One of the company’s biggest issues over the years has been inconsistency. Obviously, you can’t expect things to be perfect with cheaper instruments, but other budget brands like Squier have far fewer issues than J&D.

J&D is a decent choice for the price if you’re an absolute beginner who’s just getting into it. But it’s far from the safest bet on the market.

Even if your bass arrives in a good condition, there’s a chance your electronics will stop working. Additionally, some individual guitars might be made out of a bad piece of wood, which you can sometimes notice on their fretboards.

It can be a great choice if you feel like learning what can go wrong on a guitar and how to fix it. But if you want a reliable bass guitar for live shows, we’d advise you to skip J&D.

Rarely will you find a brand that’s done as much fake advertising as HardLuck Guitars. We don’t like bashing manufacturers, but these guitars and basses are not what they claim and most definitely not worth the price. And that’s despite a fairly low price point.

Warped necks, bad finishes, asymmetrical build, mediocre dull-sounding pickups, unreliable electronics, unreliable hardware – you name it and these guitars and basses have it!

What’s more, their design is pretty weird, too.

But what really pissed us off was the aggressive marketing. They pushed these instruments into guitar stores, offering them as budget-friendly stripped-down instruments that can even satisfy the demands of professionals.

Compared to other brands on this list (none of which are great, remember), there isn’t really anything good to say about HardLuck Kings guitars and basses.

And we really tried hard to find something to grab on to.

If you don’t believe what we’re saying, feel free to check out other people’s experiences with them, including some in-depth reviews online.

In short, HardLuck Kings basses should be avoided. They’re just not worth your time and money.

You are probably wondering why Gibson is on this list. Before we get into it: no, Gibson is not a bad guitar brand.

In fact, they are one of the most famous guitar brands. They’ve changed history with their instruments and have overcome some hardships throughout the years (and they had their fair share of them). And plenty of guitar gods still prefer their guitars over anything else.

But things get a bit wild when we get to their prices. Without a doubt, they make some amazing guitars and basses.

But we’re not sure they’re worth the cost.

In fact, in more recent years, Gibson’s reputation has taken a bit of a hit due to this exact issue. And there have bee reports of a decrease in consistency and quality control.

That’s not exactly what you want to hear about an instrument with a $2000 price tag.

When it comes to basses, they’ve definitely had some interesting models over the years. But the same rule applies – it’s questionable whether they’re worth the high cost.

The SG Standard bass, for instance, looks pretty neat, but is not really an instrument that a professional bass player would want to use.

Dean is, without a doubt, one of the most influential guitar companies period, after Fender and Gibson. Founded back in the late 1970s, they slowly, but surely, began breaking into the worldwide market of music instruments.

And for good reason. Their guitars have been found in rigs of some of the greatest guitar players of all time, including Billy Gibbons, Dave Mustaine, Michael Angelo Batio, Dimebag Darrell, Michael Schenker, and many others.

As the years passed, the company began making more than just solid-body electric guitars. They tried breaking onto the market of ukuleles, banjos, acoustic guitars, and electric bass guitars.

And they tried to cover every possible price range. Anyone from a beginner to a professional could get a Dean instrument and it would serve them well.

However, their current lineup of basses now are not exactly the most popular among bassists. In some ways, they are similar to the other brands that we mentioned here, in that their basses can be hit or miss.

The difference here is that you always get what you expect from a particular model, be it good or bad. So if you stick to models that are known to be good, you will get a good instrument.

Based on that, Dean is most certainly not a brand that you should avoid at all costs. Maybe you’ll find an older or newer model that works well for you.

But then again, it’s usually hard to find more than just a decent bass in their arsenal of products.

In the end, if you’re looking for reasonably-priced basses that manage to play and sound good, Dean will work for you, but there are other brands that do it better.

B.C. Rich guitars have become really popular among metal musicians. Part of this has to do with their design, which clearly fits the aesthetic of metal’s many subgenres.

The company actually began in the late 1960s, when their body shapes were way ahead of their time. It is no surprise they found their way into one of the most shocking and quickly-expanding musical styles of all time.

But these days, B.C. Rich are either building USA-made exclusive high-end instruments or some pretty cheap entry-level models.

And it’s these entry-level guitars and basses that attract many young metal enthusiasts, who soon discover that they aren’t really worth the time and money.

Their affordable lines of guitars and basses have received a lot of negative reviews over the years. Complaints usually include unreliable hardware and dull-sounding pickups.

Additionally, many bassists have found that some of the models are not exactly comfortable to play on, due to their odd body shapes.

B.C. Rich basses may look interesting to some of the rock and metal-loving population. But that’s basically all there is to them.

If that’s what you like, then you should get one of their basses or guitars. Just bear in mind that they won’t be the most reliable companions.

Ibanez has come a long way since their inception back in the late 1950s. Once a company that copied big brands (and got in trouble for it), they eventually became one of the leading electric guitar manufacturers in the world.

In fact, their guitars pushed the limits, fusing previously unthought-of features in one instrument. They further pushed the boundaries with their clever twists on “Super Strat” kind of guitars.

In short, they had some pretty high-end instrument models, many of which found their way into the hands of famous players.

While the main focus was on beginners, their idea was also to have a cheap line of instruments that could be used by more advanced players as well.

And we can’t deny that Ibanez GIO basses are decent. It’s always nice to have an affordable line of instruments that are solid performers.

But the GIO line won’t be the best choice in the long run. Sure, they’re reliable and they look decent enough to get you through a small-sized live gig. But once you get a bit better at playing, you’ll have to buy something new.

These are not instruments that grow with you. They are for beginners only. Overall, Ibanez GIO basses are cute, but that’s about it.

Finally, we’d like to take a look at another company that focuses on affordable instruments. Rogue is one of those brands that people don’t know much about.

These instruments are manufactured in South Korea and are distributed by Musician’s Friend. And we could compare them to Ibanez’s GIO line.

These aren’t bad basses and guitars and can be a reliable companion to beginners and possibly some intermediate players.

But you won’t see them in the hands of experienced players. They’re decent and they get the job done, but you can definitely find something way better at a slightly higher price level.

Some of the brands listed above make amazing instruments. But they charge a lot for them. In the end, the value just isn’t there, so we prefer to avoid them altogether.

Other brands simply don’t make good instruments. Usually it is a quality control issue. There just isn’t any consistency. You could get a good bass, or you could end up with a poor quality one.

If you’re looking to buy a bass guitar and want some recommendations for basses that are great values for our money, check out this article.