The good old saying “you get what you pay for” still holds true.

But not nearly as much as it used to.

These days, there are a few improved, but still cheap, entry-level instruments that can really surprise you.

The Ibanez Gio GRX70 electric guitar is one of those. It obviously can’t compete with a professional guitar, but it is far better than most of the useless “toys” you generally get at this budget level.

In the past, those “toys” were your only option if you didn’t have much money to spend. It is nice to live in a time when you can get more than what you pay for, if you know where to look.

Read the rest of our review to find out what makes the Ibanez Gio GRX70 better than all other budget electric guitars and also to learn what sacrifices were made to keep costs low.

Finding a budget guitar has become much easier in the past couple of decades. Back in the day, you had to choose between having an expensive but great guitar, or an absolutely dreadful piece of wood with some strings, hardware, and pickups slapped on it.

Luckily for us, companies like Ibanez have changed that. They have led the way in introducing some amazing guitars for a reasonable price. This is exactly what we see with their Gio line and a model like the GRX70.

No, it’s not exactly a professional-grade instrument. But it’s pretty reliable and could handle regular gigs, jams, and practice sessions. The most notable thing here is the low price and the qualities you get at that cost level.

Obviously, a cheaper guitar can’t have top-notch materials and features, but Ibanez did a pretty great job at creating the best possible metal-oriented instrument at this price level. It is essentially a “stripped-down” guitar with just the bare essentials.

And as such, it is a great deal.

The GRX70 has a super-Strat kind of body made of basswood. The neck is maple and attached to the body using the standard simple bolt-on construction. The choice of fretboard material is pretty interesting: it is made of purpleheart wood.

Other features are pretty much the “standard” ones that you see on such guitars. It comes with humbuckers in the bridge and neck positions, along with a single-coil in the middle. These are the company’s so-called Powersound pickups that they perfected over the years and began implementing on these more affordable instruments. Despite the low cost, they still manage to deliver quite a solid punch.

As expected, we have a regular 5-way switch that gives some nice versatility. In addition, it’s accompanied by two control knobs for volume and tone.

The headstock is the “6-in-line” model in Ibanez’s classic style and there are a standard 22 frets. The guitar also comes with a classic Fender-style tremolo bridge.

Everything is rounded off with a great-looking finish and a color pattern that comes in a few different variants. All in all, it’s a pretty solid instrument for the price.

While it’s mostly geared toward metal players and young “shredders,” you can definitely use it for other things as well.

Aside from a few minor downsides here and there, like the lack of additional controls, it’s a pretty reliable guitar. In fact, we would even feel comfortable using it for some gigs or at least as a spare instrument in case things go wrong.

When looking into a guitar for metal music at this price level, there are quite a few instruments in a similar style to the Ibanez GRX70 that are worth considering.

One of those the Jackson JS22, which is also known as the “Dinky.” Yes, this is a timid-sounding name, considering that it is meant for the metal population. But don’t be fooled. It’s a pretty potent electric guitar, especially for its price level. Jackson JS Series Dinky JS22
$199.99
View on Amazon
We earn a commission if you make a purchase, at no additional cost to you.

It is a similar instrument to the GRX70 and rocks some of the same features, but with a slightly different twist. Let’s start with basics. It takes just one glance to realize that these two guitars have a lot of similarities.

First off, we have almost the same Super-Strat kind of shape and overall design, meaning that both of these instruments are focused on the metal-playing population or just those who love lightning-fast shredding.

The instrument construction is similar, although the “6-in-line” headstocks are somewhat different. On the Ibanez GRX70, the strings go almost in the straight line from the tuning machines up to the bridge. On the Jackson Dinky, there is somewhat of a bend going from the tuners to the nut, especially on the treble side.

Looking at the build quality and the materials, these two guitars are roughly the same. Both have the basswood body and maple necks, as well as the standard bolt-on construction. The only noticeable difference is that the Dinky has an amaranth fretboard and a very stylish-looking binding.

There are a few other similarities, like the similar type of Fender-styled tremolo bridge. Both axes also have the two standard controls for the volume and tone (treble roll-off).

However, you can easily see that the pickup formation is different. On the Dinky, you have only two humbucker pickups, which makes it closer to those standard Gibson-style guitars. 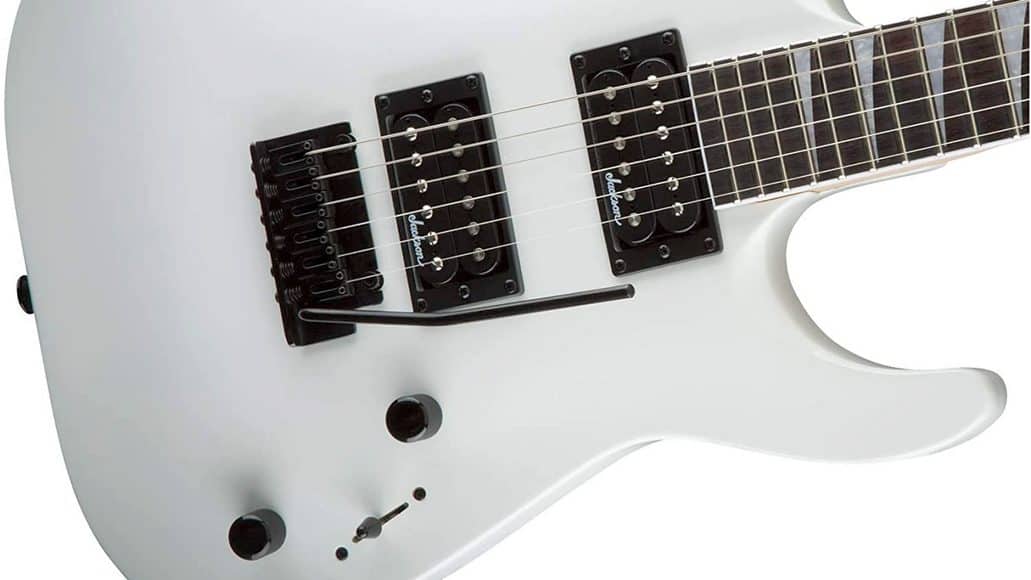 Of course, it’s accompanied by the regular 3-way pickup selector switch, making it a little less versatile than the Ibanez GRX70. However, you shouldn’t necessarily write this off as a downside. It really comes down to personal preferences.

As for the overall quality of the pickups, they are pretty much at the same level. The Jackson might be a little heavier, since the pickups have a higher output level, but you can achieve pretty much the same tone qualities with either of these instruments.

However, we did notice a few important distinctions when it comes to playability.

First off, the Dinky has 24 frets, which is usually a trait of more expensive instruments. Also surprising for an instrument in this price range is the easier access to higher frets.

The backside of the body, right where it meets the neck, has a very useful indent that makes the playing experience at higher frets much easier. And as if that wasn’t enough, we also have some indents on the front side of the body, right at the deepest parts of the cutaways. These indents don’t ruin the guitar’s overall aesthetics either, and fit in nicely with all of its features.

While we’re on the aesthetics, another thing to point out is that the JS22 Dinky comes in some pretty nice finishes. You can choose from glossy or matte finishes, and both look super-stylish.

To add to all this, the guitar has an arched top, which is yet another feature not typically seen on budget guitars. All in all, the features are actually very close to the slightly more expensive J32. Read our review of the Jackson J32 for more on the Dinky series.

Overall, you can’t go wrong with either of these two instruments. They’re at the same price level and, while similar, both have their advantages and disadvantages.

If you’re looking for a more stylish guitar, you might want to go with the Dinky. That said, some might prefer the good-looking color patterns of the GRX70.

The Ibanez does have more sonic options due to the fact that it has three pickups. The bridge quality is pretty much the same, but the Dinky does have a slightly more ergonomic feel when it comes to the higher frets.

At the end of the day, it’s hard for us to say which one is better or worse. It just comes down to personal preferences. We recommend trying both out and playing a few simple heavy metal riffs to see how they feel.

The Dinky has a few more interesting ergonomic features, while the Ibanez GRX70 is a little more versatile with its three pickups. It also keeping things a little “softer” in this regard. As we said, you can’t really go wrong with either of these, if you’re looking for a cheap but decent guitar.

Although cheap, the Ibanez Gio GRX70 is not one of those random no-name electric guitars from China that sell beginner friendly bundle that includes a bunch of cheap crap, like a gig bag, a small amp, and a various other “goodies.”

Note: I should point out that not all Chinese brands make cheap, low quality instruments. For now, most do, but there are also a few brands like Eastman that make excellent guitars. Read “Where Are Eastman Guitars Made?” for more.

The GRX70 is actually a pretty decent instrument that can handle a lot of stuff. The only real downside worth mentioning is the tremolo bridge. The guitar might get out of tune if you abuse it. Other than that, this ax works great.

This is a guitar intended for beginners and intermediate players, mostly those who are into metal music.

However, it does work well even if you’re a more experienced player who needs a spare guitar for live shows. It will do the trick, as long as you don’t abuse the tremolo bar, causing the guitar to go out of tune.

This electric guitar is obviously nowhere near the level of a professional instrument, but for those on a budget, it is easily the best option. That earns it a Musicaroo rating of 4 out of 5.