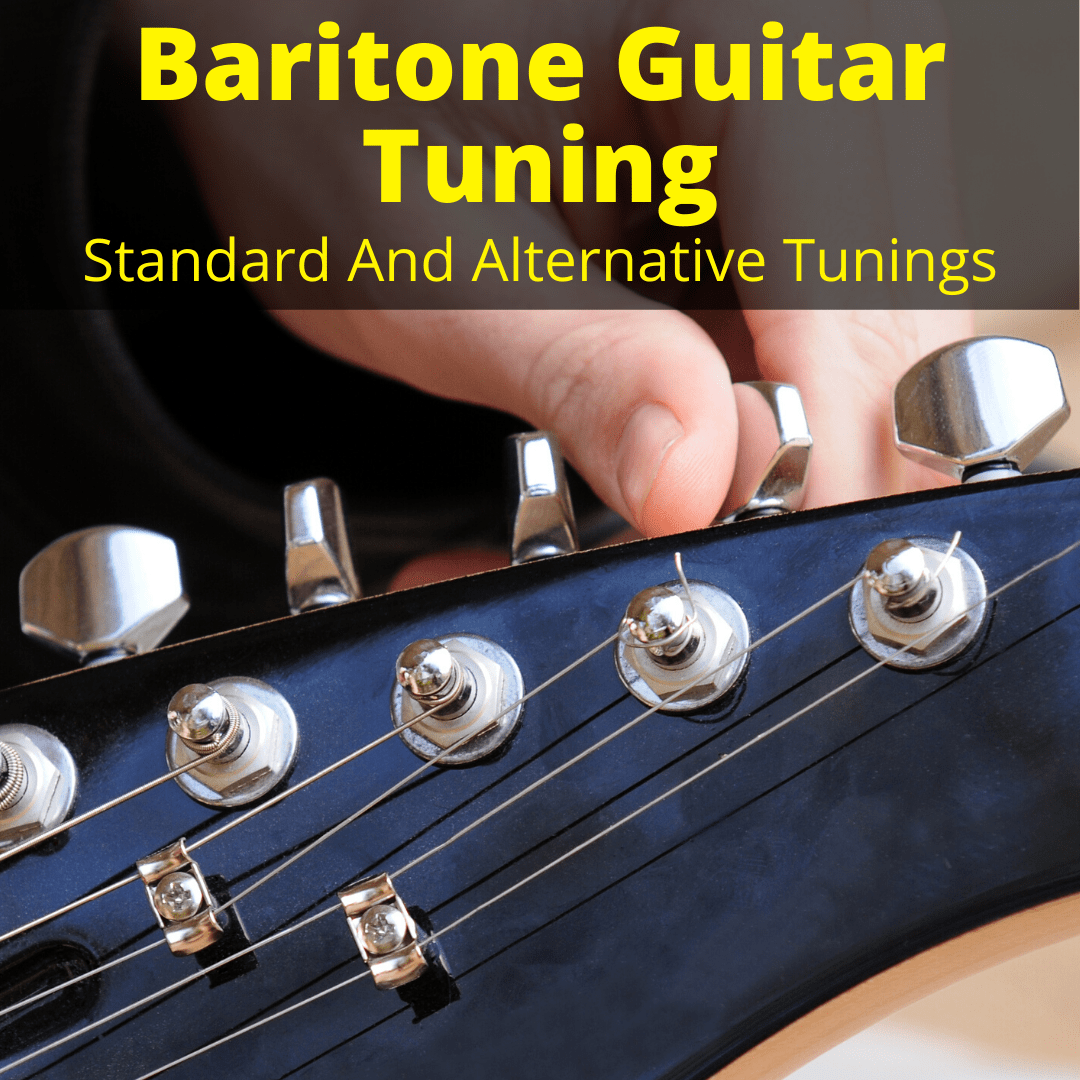 The primary difference is a longer scale length, which means you can get a much lower tone. Our article What Is A Baritone Guitar covers all of that.

What’s important for this article is that the longer scale length makes baritone guitar tuning different from the tuning of a regular guitar.

While the actual tuning process is the same (we cover it briefly below), the actual notes to which the strings are tuned differ.

Baritone Guitar Tuning: How It Differs

Let’s begin with E standard tuning. That’s what normal guitars are tuned to. By “normal” guitars, we mean ones with a scale length between 24 and 25.5 inches. These are the most popular guitars and the ones you generally see and hear.

In E standard, the strings are tuned as follows, beginning with the first string (the thinnest one, i.e. first from the bottom):

But this is only standard tuning. There are so many other interesting tunings that you can use with the guitar.

One that most intermediate guitarists turn to (stereotypically) when they begin to experiment is drop D (here are some easy drop D metal songs, if you’d like to give this tuning a try). That’s when the low E (the sixth, or thickest) string, is lowered from E to D, so that it is exactly one octave lower than the fourth string. Drop C tuning is also popular.

But there is a limit to how low you can go. Because of the scale length (the length from the nut to their saddle), you can’t tune your guitar too low. The standard guitar simply is not long enough for the strings to maintain enough tension to sound the way they should, if you tune too low (i.e. loosen the tension in the strings).

That’s where the baritone guitar comes in.

These guitars have a scale between 27 and 30 inches, allowing them to  go much lower. In fact, they were created to accommodate low tunings.

Then there are alternate tunings which are really just relative tunings to common ones used on standard guitars – tunings like drop A, double drop A, A-E-A-D-E-A , and G-D-A-D-E-A. We’ll go into more detail about what each string should be tuned to for these tunings below.

This is all well and good, but what does that actually mean for you as a player?

Baritone guitars, in their typical tuning, have a very unique sound. They’re twangy and full – think of that distinctive surf rock sound.

But they can also be heavy and crushing – like when they’re used as metal guitars.

Those aren’t the only genres that have made use of these instruments. Country artists, jazz musicians, and even spaghetti-western composers have all relied heavily on the baritone guitar. And this diversity of tone is thanks to the fact that these guitars are tuned so low.

Baritone guitars broaden the sounds you’re able to produce on the guitar. They’re an extra tool in your arsenal and you don’t have to learn an entirely new instrument to play them either.

The following are the standard tunings for baritone guitars and thus also the most common.

As covered earlier, this is the standard tuning for baritone guitars. The strings are tuned as follows, from bottom to top:

However, because every string is strung exactly two and a half steps lower, the relative tuning stays the same, so you can simply transpose chord shapes to this tuning. For example, you can still play the G major chord shape, with the root note on the sixth string’s third fret. It will sound fine, but instead of being a G, it’ll be a D.

The table below tells you what each E standard chord would be transposed to in B standard, using the same shapes on the same strings and frets.

The second of the standard tunings for baritone guitars, A standard is a full seven notes lower than E standard. That’s three and a half steps lower, and one more than B standard. Each individual string is tuned as follows, from the first string:

Just like with B and E standard, the strings are tuned relative to each other. And that means you can use the same chord shapes in this tuning as well, but the chords will be transposed three and a half steps down.

Relative to what they would be in E standard, the transposed chords are as follows:

You might remember the mention of drop D tuning earlier. That is where you take a guitar tuned to E standard and drop the tuning of the sixth string only, going down a step from the low E to D.

You can apply the same process to tuning to drop A on a baritone guitar. If your baritone guitar is tuned to B standard, and you want to tune it to drop A, simply lower the tuning of the sixth string from B to A. This is the same note as the fourth string, but an octave lower.

Drop A, and indeed pretty much any drop tuning, are often used in heavier music. Because the sixth and fourth strings are tuned to the same note, but different octaves, these tunings allow you to play power chords with one barred finger. This lends itself well to the guitar techniques used in metal and the multitude of heavy music subgenres.

Each string is tuned as follows on a baritone guitar in drop A:

This tuning is basically the baritone guitar version of double drop D tuning on standard guitars. To get to this tuning from B standard, you need to drop the low B string down until it reaches A, just like above for drop A tuning.

The difference for this tuning, is what you do to the first string, the high B – you tune it to A as well. This means that your two outside strings, and the fourth string on your guitar, are all tuned to A.

This is what each string is strung to in double drop A on a baritone guitar:

This tuning gives your chords a low, droning sound. This is perfect for ethereal, atmospheric music. Its higher pitched counterpart, double drop D, is quite versatile. It is used for various genres, so it stands to reason, that the lower double drop A tuning is also extremely useful for a range of different genres.

This tuning isn’t as fun to say as its higher-pitched relative, D-A-D-G-A-D, but it’s just as fun to play. Great proponents of the D-A-D-G-A-D tuning are artists who play fingerstyle acoustic guitar, like Andy McKee, who plays incredibly emotive baritone guitar songs in this tuning.

The A-E-A-D-E-A tuning provides all the hallmarks of D-A-D-G-A-D, but in a lower register, giving it a warmer, more inviting tone. The thing that makes this tuning so beautiful, and allows you to create such wonderful sounds from it, is that it’s an open tuning. If you strum the open strings, without playing any notes on the fretboard, it still creates a gorgeous sound.

It may be self explanatory, but each string in this tuning is strung as follows, starting from the bottom string:

Do you notice any similarities between this tuning, and the one above? If you said that only the fifth and sixth strings are tuned differently, and the bottom four strings are exactly the same, you’d be right. Another open tuning, this baritone tuning’s higher-pitched relative tuning is C-G-D-G-A-D.

In G-D-A-D-E-A, the two low-end strings are tuned so low that the sixth string almost reaches bass territory. In fact, it’s only two steps higher than the low E tuning used as standard for bass guitars.

From low to high, each string on the baritone guitar is tuned as follows:

If you’ve tuned a standard guitar, you already know exactly how to do this. The only difference is the fact that you’re tuning the baritone guitar much lower. That’s why it’s suggested to use the guitar tuner for accuracy, rather than tuning each string relative to the others using your ear.

However your tuner works, if you have to plug it in with your lead or just put it on your headstock, or even if you’re using a tuning app on your phone (these are great if you’re in a bind and don’t have a proper tuner, but it’s recommended to always use a proper tuner if you have one handy), turn it on.

Then play your low sixth string, and turn the tuning pegs to adjust the tuning until you hit the correct note.

Repeat this for each string.

Just like on standard guitars, if you’re tuning to B standard, you can tune the strings relative to each other. You can do this to check how all the strings sound in respect to each other, so that you’re sure everything sounds as perfect as it should.

Just like with the standard guitar, beginners on the baritone guitar will probably want to stick to the standard tuning. But as you get better, experimenting with alternative tunings can be a fun way to get more creative. Give some of them a try and see how they sound!