Sometimes you just need to play louder on the trumpet.

But it’s not simply a matter of just blowing harder and reaching a higher volume.

You need to know how to play the trumpet loud while still maintaining control, core, projection, and musicality.

And that can be tricky.

Keep reading to learn all about playing the trumpet louder, while still sounding just as good.

How To Play Loud On Trumpet

Here are three exercises that will help you play louder Long notes will accompany you throughout your musical life. They will be your best allies for the good development of your “robust” mouthpiece. The attack is nothing more than the way in which we start the sound. For this we rely on the pronunciation of syllables: Ta, Ka, Da, Ga. You can start with TA, which is the most used.

Benefits When Developing The Attack

This type of exercise will help you know how to control the air, and significantly improve the quality of your sound, as well as the loudness. Getting a better tone on trumpet while playing louder is the key and this helps immensely with that.

Why Playing Loud Correctly Is Important A powerful, emotionally rich sound is determined not only by its strength, expressed in decibels, but also by the quality of its pronunciation, a clear, active sound attack. You don’t want a muffled sound from your trumpet.

The boundaries of the dynamic range of the pipe can be expanded through intense tone coloration, intense vibrato, volitional guidance, and joining and ending sounds.

All this creates the impression of a great emotional and dynamic intensity, which is usually necessary at the culminating points of a work.

However, the loud sound of a good trumpet, without other important qualities (a clear attack, flight, sonority, timbre, depth, vibrato), will not be able to meet all the requirements that it must satisfy.

The trumpet has a bright and powerful sound, capable of cutting through the sonority of the largest symphony orchestra.

At the same time, the sound of the trumpet can be soft and quiet. That type of sound also makes a lasting impression on the listener. It is no coincidence that some of the best trumpet solos are soft and quiet.

The dynamic range of the pipe is very wide. Therefore, dynamics occupies one of the leading places among other effective means of expression. At the same time, it is also a very complex component of the trumpet player’s performance skills.

An increase in the intensity of the air stream sent to the instrument, thanks to the metal mouthpiece and the metal resonator (pipe and its bell), leads to a large increase in volume, the limit of which is determined by the strength and training of the trumpeter’s ear cushions.

The most important condition for the correct performance of dynamic nuances is the preservation of pure intonation and the good sound quality of the instrument.

It is quite difficult to achieve pure intonation on the trumpet in conditions of changing dynamics.

This leads to an increase in the amplitude of the vibrations of the lips, as a result of which the frequency of their vibrations decreases somewhat, and the pitch of the sound decreases.

With a decrease in the speed of the airflow, the amplitude of the vibrations of the lips decreases, as a result of which the frequency of their vibrations increases and the sound intonationally increases. 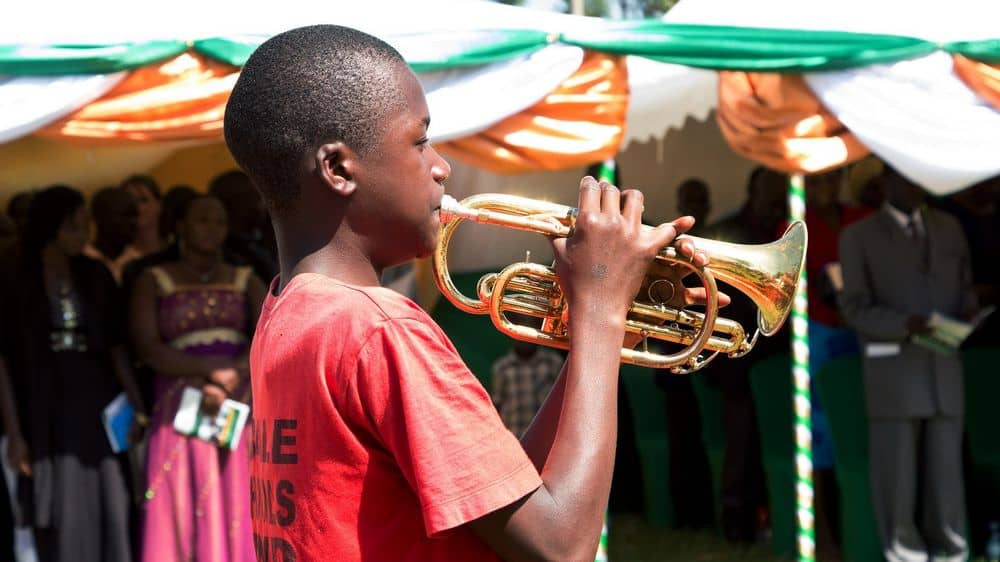 The emotional side of the perception of dynamics, in addition to changes in the strength of sound, is influenced by other factors.

For example, other things being equal, the sound in pp in its spectrum has more intense lower harmonics, including the fundamental tone, and with ff, high harmonics are more pronounced.

Therefore, professional trumpeters achieve the effect of dynamic growth, not only by mechanically increasing the intensity of breathing into the instrument, but also by changing the timbre of the sound, its brightness, and sonority.

At the moment of increasing the speed of the air stream, the trumpeter intuitively changes the quality aspect of his sound apparatus.

He or she strives to ensure that a greater number of high harmonics are excited in the instrument, the intensity of which in the sound spectrum is perceived by our hearing as an increase in volume.

In practice, this is due to the tighter cohesion of the lips, due to which conditions in the sound spectrum are created for the detection of higher frequencies.

Less taut and taut ear cushions lead to fewer high overtones. Expanding the dynamic boundaries of the instrument, which makes it possible for the sound of a trumpet to cut through a powerful orchestral tutti, is actively helped by the nature of the sound production, and the corresponding attack of the sound.

The main material for working on the dynamics of sound is exercises in sustained sounds. The sound should be pulled in the nuance of piano four quarters:

Particularly important is the ability to mill the sound on piano. At the same time, it is necessary to monitor intonation, not allowing a decrease in the sound in forte and an increase in piano. From Piano To Forte

It is easier to play the trumpet in the nuance of forte and mezzo-forte, which is more difficult in piano. In this nuance, the sound quality, depth, timbre are usually lost.

It should be remembered that in piano the trumpet should sound like “forte, but very far away”. It was noted above that increasing the volume leads to an enrichment of the timbre.

The smallest number of overtones, especially high ones, has the spectrum of sounds produced in piano and pianissimo. That is why a lot of work is required on this nuance.

Piano requires a solid and full breath. Dynamic gradations from piano to forte in performing practice should be gradual. One-sided fascination with extreme nuances is undesirable.

How To Play Louder On Trumpet: Final Thoughts

Playing the trumpet loud is easy. Just blow more air into the instrument and blow it with more force. But you’ll likely find that the quality of your sound suffers.

Playing the trumpet louder, while still sounding just as good, is much harder. You’ll need to practice consistently, to train your embouchure and breath control properly. This is especially true when recording your trumpet with a microphone.

If you have the opposite issue and need to practice more quietly, so you don’t disturb your neighbors, we have help for that, too. Read “How To Practice Trumpet Quietly.”