It shouldn’t be that hard.

The best trumpet mouthpieces are easy to insert and easy to remove.

At least most of the time.

But sometimes a mouthpiece can get stuck. Usually this means you have an ill-fitting mouthpiece, or it get damaged somehow.

If you find yourself with a stuck trumpet mouthpiece that you can’t get out, don’t panic.

Keep reading for 5 quick and easy methods you can use to remove that stubborn mouthpiece.

How To Get A Stuck Mouthpiece Out Of A Trumpet

A trumpet mouthpiece gets inserted into the main tube of the instrument. And it should be just as easy to remove from the instrument, with a simple twist.

However, sometimes playing with too much pressure, or having a mouthpiece that does not fit well enough, can result in the mouthpiece getting stuck.

When this happens, it is important to use decoupling techniques that do not damage either your valuable trumpet or the mouthpiece. 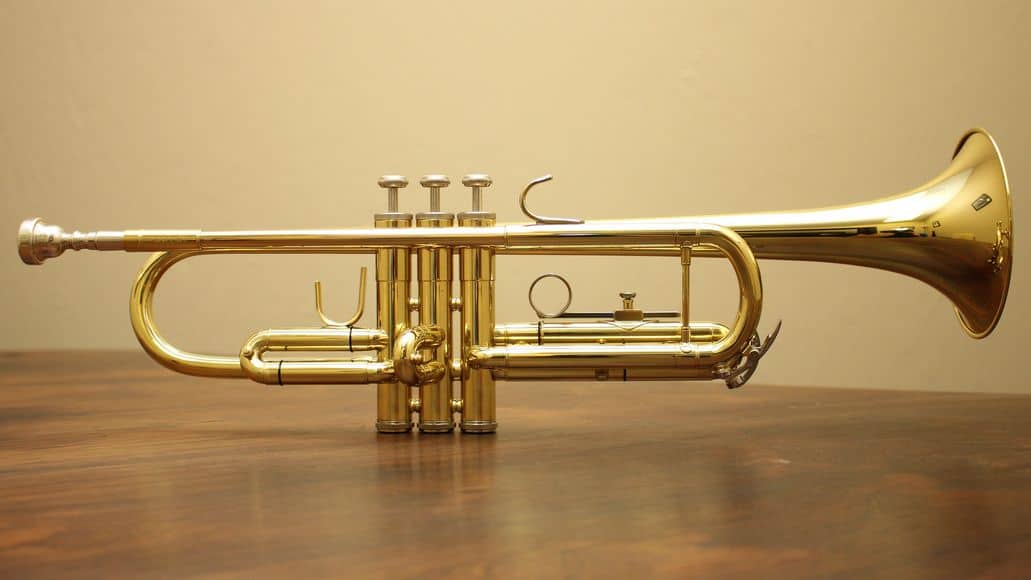 Having a stubborn trumpet mouthpiece is a very frustrating experience for a trumpet player. Oftentimes, you might not even realize that the mouthpiece is stuck until you really need to remove it, such as after a concert or when packing your trumpet for travel.

Regardless of how the mouthpiece became stuck in the first place (usually by dropping the trumpet or just pressing by pressing the mouthpiece in too much), you can still remove it relatively easily.

We’ll go over 5 different methods for removing a stock trumpet mouthpiece. The last is the easiest, but it requires a piece of specialized equipment.

If you don’t have that, try the other methods first. If you try one and it does not work for you, move on to the next and give that one a try.

Use Material To Improve Your Grip

Improve your grip by placing a piece of material between your hand and the mouthpiece. Use a piece of cloth, or wear a glove, which will allow you to squeeze, grip, and twist more firmly without hurting your hand.

Good materials to try include leather and terry cloth (towel material), especially if they are slightly damp.

Loosen the mouthpiece with a little bit of oil. Drip some trumpet valve oil into the crevice between the mouthpiece and the lead tube. Use a very small amount to prevent oil from dripping down the pipe nozzle area and making it slippery. Cool down the mouthpiece. When heated, the metal expands, while a cool temperature will shrink it slightly. Put the end of the mouthpiece into a glass of ice water while keeping the lead tube warm with your hand.

This method is pretty similar to the previous one, just without cooling. Gently tap the mouthpiece with a rubber mallet. Use a pair of mouthpiece pullers. Get in touch with a local instrument service person (or in some cases, the band director at your local school) to find and use this piece of equipment. You can also find them on Amazon: Mxfans Trumpet Mouthpiece Puller
$24.99
View On Amazon
We earn a commission if you make a purchase, at no additional cost to you.

Brass instruments shops also typically have this tool, which is specifically designed for this type of job. It is made primarily to remove the mouthpiece from a trumpet, but it can be used with other brass instruments as well.

It turns a complicated situation into easy operation without damaging the instrument and avoiding unnecessary efforts. Its operation is simple, allowing you to adjust and remove the mouthpiece with ease.

The body is made of aluminum and the lever is made of galvanized steel for greater resistance. It is ideal for both professional musicians and students.

Under no circumstances should you use tweezers to remove a stuck mouthpiece. It is likely to damage the mouthpiece or the trumpet itself.

In the future, apply a small amount of wax to your mouthpiece catcher to prevent the mouthpiece from getting stuck in the first place.

How To Play Trumpet Without A Mouthpiece

If your mouthpiece gets damaged before the show and you have no time or means to replace it, there is a way to play your trumpet without a mouthpiece. This can also come in handy if you don’t have a clean mouthpiece. 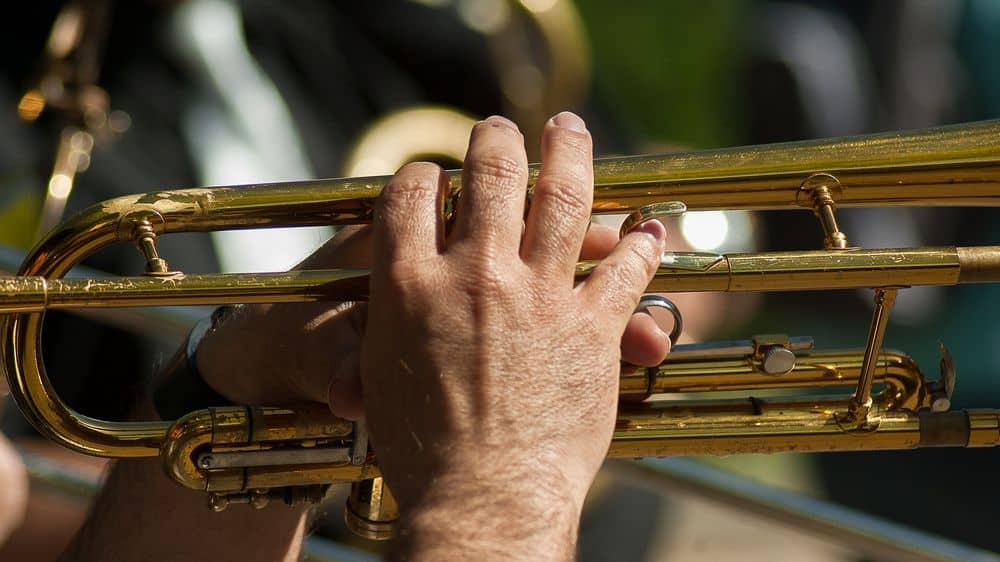 Buzz on your trumpet mouthpiece and simulate scales and melodic passages that you would rate as moderately difficult to difficult. Take at least 10 to 15 minutes to heat up on the nozzle.

Put your trumpet up to your mouth without the mouthpiece placed on the lead pipe. Place your lips on the free shaft of the lead tube and buzz on the trumpet just like there is a mouthpiece there.

You will notice that the sound of the trumpet is much harsher than the tone you are used to. This is a direct result of producing much more pronounced vibrations from the lips. The mouthpiece normally picks these vibrations up and redistributes them.

Perform a Bb major scale using half tempo quarter notes as its rhythm. Play at least one octave of the Bb concert low scale for the beginning. Stop after completing the scale.

Take a rest for 5 minutes. Play the trumpet again, this time performing an Eb major scale starting at the Eb concerto in the background of the treble staff. Play at least an octave up on the move.

Buzz your lips with just the mouthpiece, i.e. with it not attached to the trumpet. Buzz for just two minutes or so.

tart playing the trumpet again without the mouthpiece, this time performing a melody that you have memorized. Try and play a tune that requires you to play it in at least one and a half octaves. The idea is to adjust the lips to play both highs and lows without a mouthpiece.

Take the trumpet away from your face and flutter your lips for at least 5 minutes to get the blood flowing again. Repeat this process every other day for a week before beginning to perform a greater number of scales and higher notes on the register.

Differences Between Mouthpieces For Trumpets And Cornets 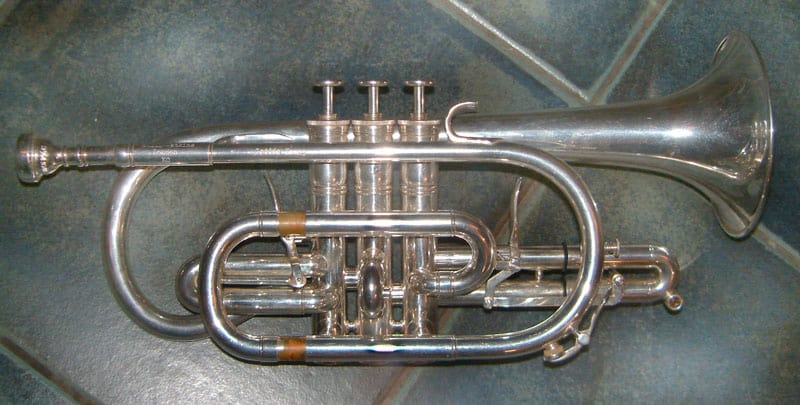 For beginners, this is a very important distinction to know, or you might accidentally buy a cornet mouthpiece and place it on your trumpet.

To an untrained ear, the difference in sound between a cornet and a trumpet can be imperceptible.

The trumpet was the first of the two to be developed. Appearing in the Baroque era, the distinction that the trumpet had over other brass instruments is that the diameter of the hole (the size of the inside of the horn) was kept as constant as possible.

The tuning is also kept as straight as possible and these aspects produce a bright and powerful sound. The distinct blast of the trumpet has made it a favorite tune instrument of brass sections in bands and orchestras in the late ’70s.

The cornet was developed in the 19th century in France and quickly became an instrument of the main melody. The horn has a bore diameter that increases with the length of the horn.

The tubing of a cornet is wound more compactly, increasing the resistance of air blown into the horn. These factors give the cornet a softer sound than a trumpet.

In written music featuring a cornet and trumpet, the cornet will generally perform the most complicated technique within a piece due to its softer tone.

The Difference In Embouchure

Embouchure is the use of the facial and lip muscles to produce the sound of a metal instrument through its mouthpiece. Embouchure affects the tone of the instrument with adjustments to the cheek and jaw muscles as well as manipulation of the tongue.

The embouchure when playing a trumpet or cornet is different. The extra resistance in a cornet forces the muscles to be used differently to force air into the cornet.

The Difference In Mouthpieces

Mouthpieces for cornets and trumpets vary in cup diameter, cup depth, and the edge of the shape. Diameters range from 15.00 to 17.50 millimeters.

Cup depth can vary between deep, medium, and low, and rim sizes can be thin or wide, with multiple variations. Cup diameter and depth affect the sound and tone of an instrument while the rim shape is more for feel and comfort.

Cornets and trumpets use the same entry-level mouthpiece system, and choosing the correct mouthpiece depends on what is comfortable for you and what tone you are looking for.

The main difference between the two mouthpieces is in the back hole, the stem that connects to the mouthpiece and inserts into the hole in the instrument.

Usually mouthpieces are easy to remove from a trumpet, but sometimes they can get stuck. When that happens, don’t panic.

Try one of the 5 methods above to get the mouthpiece out. The 5th method is the best, if you have a mouthpiece remover, or are willing to buy one. If not, try the other methods first. One of them is sure to work just fine.