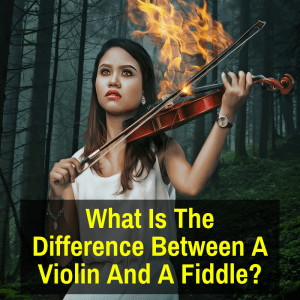 What is the difference between fiddles and violins?

You don’t spill beer on a violin!

Ok, so that’s an old (and somewhat lame) joke.

And that was actually a trick question.

The violin is the smallest and highest pitched instrument in the chordophone family. It has four strings which require a bow to play.

The bow is usually made of a collective of strands of horse hair. They are tuned to the exact right tension that they create the desired sound when they glide along the violin strings.

It is believed that the violin originated from ancient Asian cultures and spread through Europe some time before the 15th century.

Then there is the fiddle.

What is a fiddle exactly and what is the exact difference between a violin and a fiddle?

As mentioned, this is a bit of a trick question.

Physically, the two are the exact same instrument.

What we also refer to as a “fiddle” has the same mechanical structure as a violin in every way, with four strings, a bow that needs rosin, a hollow wooden body of the same shape and size and the same sized neck.

So if the two instruments are exactly the same, why have two different names?

The New York Grove Dictionary of Music and Musicians defines the fiddle as “a generic term for any chordophone (string instrument) played with a bow.”

Naturally, the violin fits into this category. This is just one definition out there and it certainly isn’t the most widely used.

On a broader scale, a more popular approach for defining the difference between a fiddle and a violin is that they are, in all practical terms, the exact same thing.

The difference lies solely in the style in which the musician is playing it. 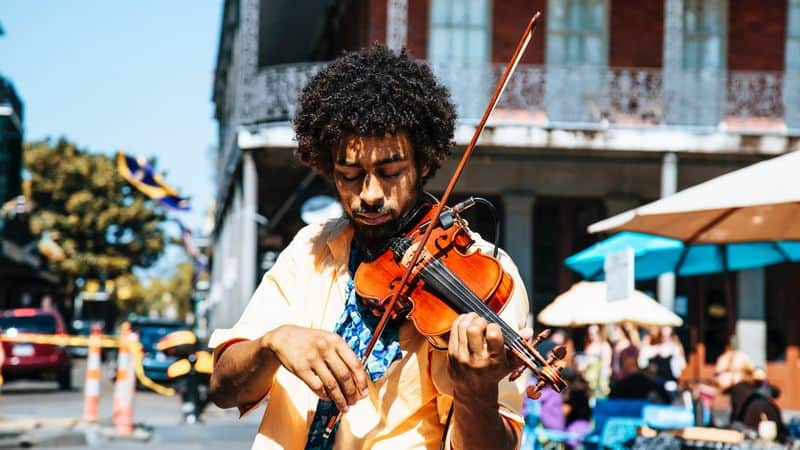 That said, the style and the manner in which the two are played does dictate a few physical differences. Those differences are in the set up of the instrument only. The size, shape and other characteristics remain the same.

For example, classical violinists generally prefer synthetic string cores, while fiddlers prefer steel core strings, because they produce a clearer sound. Because steel core strings are more sensitive, this necessitates fine tuners, in addition to the tuning pegs. You can learn more about strings here.

Another possible difference is a flatter bridge on the fiddle. This makes it possible to play three (or even all four) strings at the same time.

The shape of the bridge does not matter when it comes to other things however, like storage of your violin.

When we say “she is a violinist”, this means that the preferred style in which she usually plays this instrument is either classical, jazz or contemporary. These are some common violin songs for beginners, for example.

When we say “he plays the fiddle” we are still referring to the same instrument, but the style in which he plays differs from that of a so-called violinist. The style and character of the fiddle is far more lively, upbeat and ornamented.

The so-called fiddler is someone who uses this instrument to play traditional Celtic music (whether Irish, Scottish or Welsh), folk, blues or bluegrass. Modern folk rock bands like Mumford And Sons can also be seen using the fiddle.

Any genre of music that is played by a violin and is highly decorated with very acutely ornamented melodies, a fast tempo and a variety of intervals of syncopation and vibrato all wrapped into one, is generally called fiddle music.

If we look at the famous Irish fiddler Mark O’Connor in contrast with any of the violin concertos or sonatas composed by the classical genius Ludwig von Beethoven, we can certainly hear a stark, audible difference in styles. 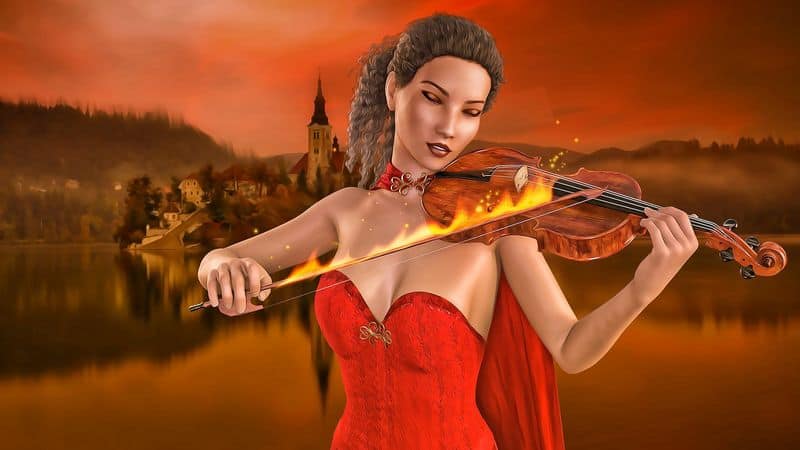 The fiddle has an almost bouncy feel to it; the melodies seem to go up and down with great haste and without much warning, whereas Beethoven’s violin sonatas seem to follow what we now know as the strict classical form.

Fiddle music is ornamented heavily with unexpected quavers popping up and fluttering around like a family of butterflies flying through a field of flowers on a warm day. The role this style plays is to get the listener up and dancing, in order to provide a lively atmosphere at social and communal events.

Classical violin masterpieces tend to often drag out their notes more, like long waves hitting against a shore. And they seem to avoid the same kind of fast-paced ornamentation that fiddle music provides. They are characterized by clear homophonic melodies and contemporary expression.

Many fiddlers also hold their instruments differently. They play with it pressed against their chest, or lower down on their are, instead of under the chin, as is common for violinists.

They do this, because it frees their mouth up for singing. Violinists never sing, but many fiddlers do, necessitating they hold the instrument somewhere other than below the jaw.

For those who prefer video, this one does a good job of explaining the differences between violins and fiddles.

Difference Between A Fiddle And A Violin: Related Questions 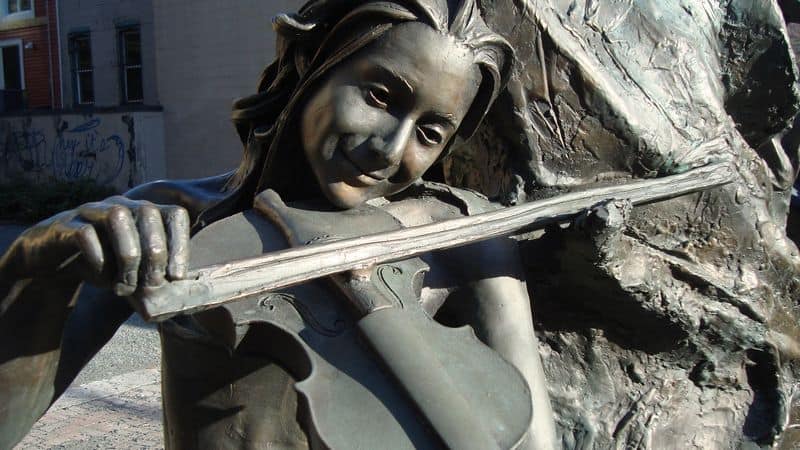 How Many Strings Does A Fiddle Have?

A fiddle has 4 strings, just like the violin (because, remember, they are the same thing). That said, some fiddles have five strings. The additional string is in C and added to the bass end.

Is A Fiddle Hard To Play?

It is certainly difficult to learn and more so than many instruments, but whether it is the most difficult of all depends on the learner. Some people just take to the fiddle/violin more easily than others.

Who’s The Best Fiddle Player Of All Time?

Obviously, whenever you ask this type of question there is a lot of debate. You will never find agreement on who is the best fiddler ever, so I won’t even try to name one. Instead, I will give you a handful of names that typically come up in this conversation.

A few of the greatest fiddlers of all time are (in no particular order) Michael Cleveland, Kenny Baker, Vassar Clements, Mark O’Connor, and John Hartford. And yes, there are quite a few more I could list. Feel free to add some names in the comments below.

Why Did Old Time Fiddlers Put A Rattlesnake Rattle Inside Their Fiddles?

The primary reason they put a rattlesnake rattle inside their instrument was to ward of bugs. The inside of a violin is aparenrly very inviting to wasps and mud daubers, who enjoy flying in through the F holes. And since fiddles were often kept in the barn or on the porch, this was a big problem.

The rattle inside the fiddle would begin to vibrate when the insects wings beat inside the instrument. The rattling would scare the insect away and keep the instrument free from invaders. This worked to keep spiders from building cobwebs inside the violin, too.

Some fiddlers also found that having a rattlesnake rattle in their instrument was like adding a rhythm section. Another reason given is that is makes for a crisper and louder sound, by attracting the lint, fuzz, dust in the instrument to itself, thus keeping the violin clean.

So with this, let the discrepancies and the misinformation about whether the violin and the fiddle are in fact two instruments end.

The mechanical structure is identical; only the musical style varies, but varies greatly. Listening to a fiddler and listening to a violinist, you will be able to hear a very obvious, audible difference between the two musical styles.