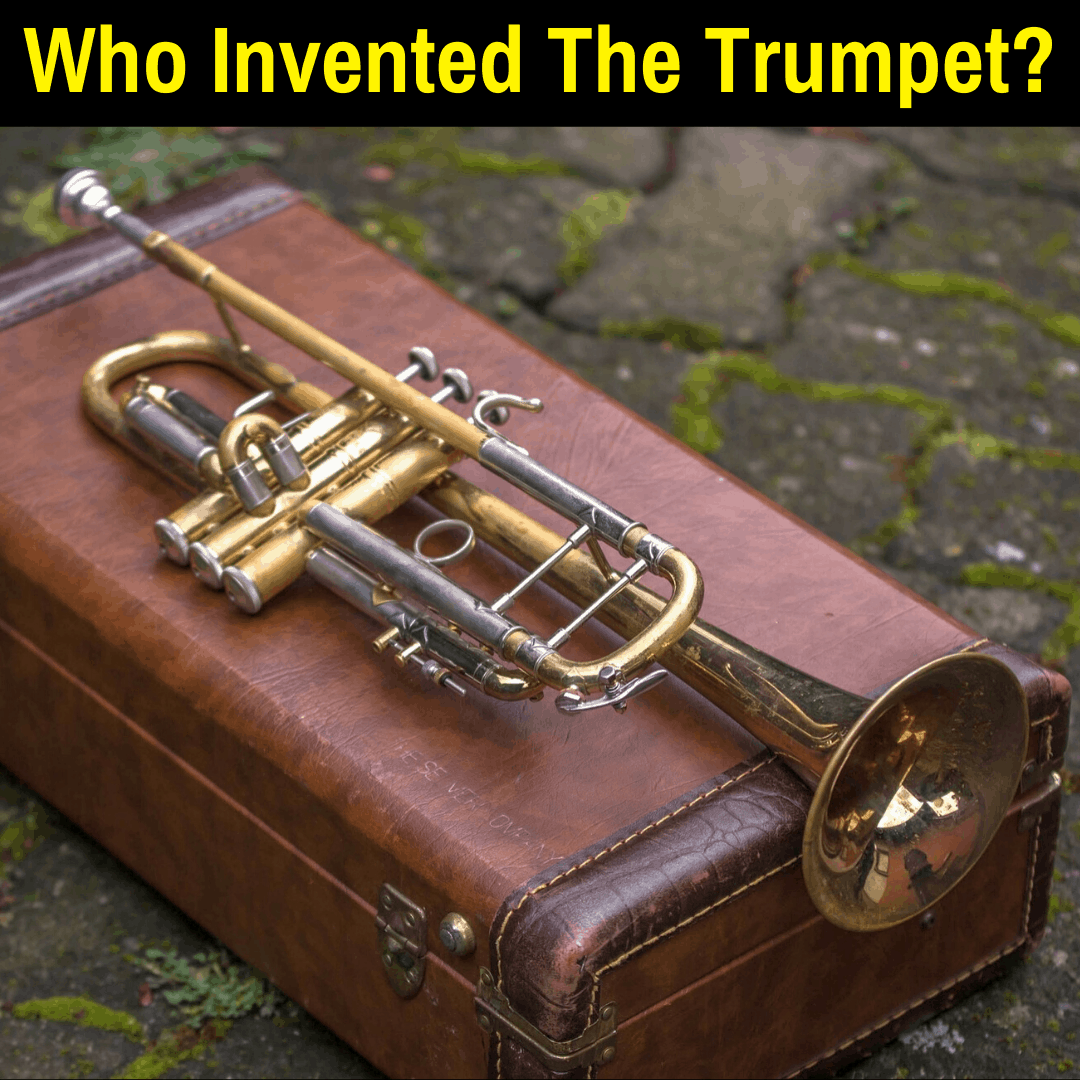 Just give the name of the man or woman who invented the trumpet.

But to do that, you first need to define what the trumpet actually is.

Is it the modern day instrument we all know and love?

Or is it some previous version that did not have the valves, or the same tubing, or that was made from wood or bone?

These instruments are all precursors to the wonderful modern trumpet and they all had different inventors. For that reason, we cover them all below.

Who Invented The Trumpet?

Their names were Heinrich Stölzel and Friedrich Blühmel. In 1818, they created and patented the box tubular valve – the invention that would spur the evolution of the trumpets we use today.

Born on the 7th of September 1777 in Schneeberg, Saxony, Stölzel was a horn player and credited as being the primary inventor of the Stölzel valve, which lead to the invention of the box tubular valve. He died in Berlin on the 16th of February, 1844.

Born in 1777 in Germany, Blühmel was a miner who played trumpet and horn in a band. In partnership with Stölzel, he created and co-patented the box tubular valve. He died in 1845.

How did they come to invent the trumpet?

As mentioned, they invented the box tubular valve. But the trumpet as we know it wouldn’t be what it is without the patent that Stölzel and Blühmel submitted in 1818.

Their patent was born from the invention of the Stölzel valve. The namesake inventor came up with, and executed, the idea of putting a valve on a horn in 1814. This was called the natural trumpet.

Why did they invent the trumpet?

Apparently, they invented the trumpet to make natural trumpets chromatic. The truth dispels the belief that Stölzel invented it as a way to change the crook quickly.

And, more than just debunking a rumor, this stance is based on a letter Stölzel sent to the King of Prussia, Friedrich Wilhelm III. In the letter, Stölzel said, “The horn, to which I have chiefly dedicated myself, is most defective as regards the inequality of its notes and the impossibility of producing them with the same purity and strength.”

Obviously not too happy with the instrument in its then current state, Stölzel goes on to say that he tried and failed many times to come up with ways to improve it to his liking and his standards.

That is, until he invented something that “… rewarded me for all my trouble and satisfied my demands on the instrument. My horn can play all the notes from the lowest to the highest with the same purity and strength without having to stop the hand into the bell.”

At around the same time that Stölzel was busy at work on his valve, Friedrich Blühmel was hard at work on ideas involving rotary valves. Blühmel submitted a patent for a valve in which he stated that he was not satisfied with the brass instruments he’d been playing, and this needed to change. His main goal was similar to Stölzel’s – to make brass instruments chromatic.

Blühmel developed the design, and the two eventually came to an agreement to submit a patent for a tubular box valve together.

History Of The Trumpet Before those two history-changing gentlemen could create the valve that changed this instrument forever, there had to be an instrument to change. And that history stretches back to Ancient Egypt, Greece, and the Near East.

Those locations had the first ever recorded instances of horns. But if you think about it, those horns had to be inspired by something. The real birth of the horn may date back to before records were taken or history written down. We really have no idea when it was invented.

Played by vibrating your lips together, these ancient instruments were often made out of wood, bamboo, clay, bark, metal, and even human bones. They’re thought to have been used for religious reasons, and for magic.

The Ancient Greeks and Romans used natural trumpets to keep their soldiers marching to a rhythm. Following their lead, members of other European nations started employing bands of trumpet players to play military music.

It was during the Middle Ages and Renaissance that these natural trumpets really started coming into fashion as musical instruments.

But the natural trumpet is far from today’s version. Its range pales in comparison to the notes made available to trumpet players today, thanks to Stölzel and Blühmel. That is to say, natural trumpets could only play natural harmonics and did not have the chromatic range that today’s trumpets boast.

Those poor trumpeters, having to lug around so many instruments, would have rejoice if only the valve had been invented in their day.

And if you were to lie it down next to a modern trumpet, it would be twice as long. But it only had one solid tube. Modern trumpets have a bit more going on. But before the instrument could reach the heights of modern trumpets, it had to go through more transformations.

The Baroque era died down, and with it, the trumpet’s prominence. When the Classical era rolled around, the trend turned towards music being higher, and the natural and Baroque trumpets just couldn’t keep up, seeing as they couldn’t play in the middle register. That spurred the drive to make the trumpet chromatic.

One of those attempts was the creation of the keyed trumpet. Its inventor was Anton Weidinger, an Austrian from Vienna, and he got to work in 1793. 5 years later,  it was played in public for the first time. But it wasn’t very popular – in fact, it was only played 9 times.

The keyed trumpet worked in a similar way to modern day flutes or saxophones. Little holes were made at certain points in the tube. The player would cover and uncover the holes to play.

But the thing is, they couldn’t get a consistent enough sound throughout the registers in which they tried to play. Sometimes, they’d even have to use specific lip techniques in order to play some of the more hard to reach notes.

But then came the world changing year (at least in trumpet terms) of 1818, and the two men you met earlier. Stölzel and Friedrich Blühmel invented and patented the box tubular valve, an improvement on the original Stölzel valve – the easiest way to hit chromatic notes on the trumpet yet devised.

The changes that the valve brought on were more than just a new array of notes. The addition of the valve saw the addition of a second tube, and the two worked harmoniously together.

The second tube was added in the middle of the original tube, and the valve was attached to where the two tubes joined. The valve would direct the player’s air to one of the two tubes depending on the key they wanted to play in.

The beautiful thing about creating something is that it can only be made better. And exactly that happened to the valve.

The Vienna And Berlin Valves

It went through many variations, such as the Vienna valve, which was piston based, and resembled the Stölzel valve. And then came the Berlin valve, which more resembled the box tubular valve, and was invented by none other than Stölzel himself.

Berlin band leader and instrument designer Wilhelm Wieprecht improved the design, but it never really caught on with trumpets. It is, however, used in lower brass instruments.

The next most remarkable invention was the rotary valve. Invented and patented by Josef Kail and Joseph Reidl in 1835, the rotary trumpet (or German trumpet, as it was sometimes called) became one of the most popular trumpets in Eastern Europe. Interestingly, the valve was inspired by the taps on kegs.

Then, the most significant change to happen to the valve, and one that still stands strong today, happened in 1839. François Périnet improved the piston valve by bettering the action and giving it a new tubing system. This version of the trumpet was very popular in France and England, it wasn’t really favored in Germany.

While François Périnet invented the trumpet named after him, he wasn’t the most successful salesman for it. He fell into competition with more accomplished businessmen, and even though his invention is one that has so far stood the test of time, it’s not one that he could maintain.

He was forced to sell his business, and moved his attention to hunting horns. Someone who did prosper from the invention was Adolphe Sax.

Other than obviously being the inventor of the saxophone, he was a businessman worth his salt and knew how to build a brand. He held the monopoly on supplying the army, navy, and public theaters with wind instruments, including the trumpet.

Who Invented The Trumpet: Final Thoughts

A simple question like “Who invented the trumpet?” turned into a long and complex answer. But that is because there wasn’t a single inventor, nor even a single invention. There have been many different instruments that could be called trumpets, with each successive one improving on the previous.

Given that history of the trumpet, what do you think are the chances of future innovation to the instrument? Do you think it is done changing or will we see more improvements to it? Perhaps they might find a way to make it easier to play the trumpet with braces?

I guess we’ve already seen some advancements, like the smaller pocket trumpet. Perhaps someone in 1000 years will look at our modern trumpet and barely even recognize it as one.