You are here: Home / Microphones

The Rode NT1-A is extremely popular.

A large reason for that is the low price. It is rare to find a condenser microphone selling in this price range.

But where exactly does it fall behind? What do you lose by saving money on this mic instead of spending more on a higher-quality one?

The good news is: not as much as you might think.

The NT1-A is not the mic for you if you want to record vocals professionally, but if you are just starting out as a singer or podcaster and you need a budget microphone to record yourself at home, it is by far the best choice out there.

Let’s take a closer look at everything this mic delivers, despite the low cost. We’ll also compare it to two other hugely popular alternatives.

No matter your style of music or preferred vocal techniques, you just can’t get good recordings without a proper condenser microphone. But we all know how expensive these mics can get, which may discourage you from wanting to get one for home recording purposes.

Fortunately for all the enthusiasts who don’t want to (and probably don’t need to) shell out tons of money for a full-on professional mic like the Neumann TLM 103, there are some fairly affordable options. One of the best is the Rode NT1-A.

It’s a classic large-capsule microphone, featuring a gold-plated diaphragm. This condenser mic is very well-known for its warm tone, while still managing to keep some brightness and clarity in there.

This is mostly due to its specific voicing, i.e. the distribution of frequencies over the spectrum. While covering anything between 20 and 20,000 Hz (pretty much the entire audible spectrum), there are a few boosts in certain frequencies, specifically in the lower and higher-end.

As for the pickup pattern, the NT1-A is a standard cardioid microphone. It’s also worth noting that it has a pretty good dynamic range, making it capable of capturing even the slightest nuances or distant sounds and vocals. Self-noise is extremely low, somewhere at 5 decibels.

Last, but not least, it features internal capsule shock mounting and comes with Rode’s specialized external shock mount, a dust cover, and a pop filter. Rode also gives you a 10 year warranty.

As mentioned, Rode’s NT1-A captures anything within the audible spectrum, having a frequency response of 20 Hz to 20 kHz. But its main characteristics and strengths are heard in its recordings.

First, the microphone features no low cuts, and anything from 20 to 100 Hz is mostly flat. Then we notice a boost beginning somewhere between 90 or 100 Hz and going up to about 250 Hz.

There are a few bumps on the curve in the mid and higher mid area, somewhere between 2 and 6 kHz. It reaches its peak at around 12 and 13 kHz and then drops sharply after about 15 kHz.

Looking at this data, it’s pretty clear that this is somewhat of a “scooped” microphone, giving that bottom-end boost with additional high-end clarity. It’s somewhat unusual, as condenser vocal mics are generally focused on having a flatter distribution across the spectrum, with occasional boosts only in the highs and high mids.

But this curve works. The NT1-A does an incredible job with vocal recording, including spoken parts. This response can be attributed to its pressure gradient acoustic principle.

But this has a downside as well. Recordings might get a little “bassy” due to the curve’s lower end, which can result in those “popping” low-end sounds to the vocals. The included pop filter helps a lot.

What’s also worth noting is its extremely low self-noise. Levels even above 10 dB are considered to be low, but this Rode mic features only 5 dB, which is practically unnoticeable in the mix. Some significantly more expensive microphones, like Neumann’s TLM 103, have a higher self-noise rate compared to NT1-A.

This is a classic large-diaphragm condenser microphone, following all the set industry standards. It features a 1-inch capsule that has a gold-plated diaphragm. Another important feature is its internal shock-mounted design.

The mic is not that heavy, weighing in slightly below 330 grams, or about 0.7 pounds. It’s pretty sturdy on the outside, and the inclusion of the internal shock mount makes it pretty resistant to rougher handling. That said, this might be a bit overkill, as the microphone is intended for studio work and doesn’t generally see any live stage action. As stated, this is a microphone for recording vocals. As a budget mic, it is generally used in home studios, but it can handle professional studio recordings as well, though in studios it is mostly used for backing vocals. However, the cardioid pattern is perfect for solo vocal performances.

It has somewhat high noise handling, but the microphone’s voicing isn’t ideal for on-stage uses. It could potentially come in handy for some acoustic instruments, including guitars, strings, and even some louder stuff, like trumpets and other brass instruments. But if you have more funds at your disposal, a microphone with a “flatter” response would be a more suitable choice for those purposes.

The same goes for loud electric and bass guitar amps. You can technically use them, but you’ll need to set up the EQ right and do some additional tweaking in the mix. However, live usage would be complicated for guitar amps, in large part because the mic can capture some unwanted noises.

The NT1-A has no additional controls. That makes it easy to use, but having additional options can always come in handy with any condenser microphone. Having a few pickup patterns can help in implementing it in different settings, and a low-end cutoff filter would certainly make things easier with any vocal recording.

Since the Rode is a budget alternative to higher quality, and much more expensive, condenser mics, it only makes sense to compare it to one of the most popular budget mics on the market: the Audio-Technica AT2020.

That said, there is really no comparison. The NT1-A is a much better microphone. Not that the AT2020 is bad. It was designed to be a very affordable home recording and podcasting microphone. It does those things well and sells for a very low price. The Nt1-A does those things better and costs more.

They’re both condenser microphones with cardioid pickup pattern. However, one of the first things you notice is the AT2020’s significantly higher self-noise of 20 dB SPL. And while it’s flatter in the overall frequency response, it still has almost no low-end cut off.

There’s a slight boost in the higher mid and high end, but the tones are, overall, less “scooped” than those of the NT1-A. The full frequency scope is exactly the same for both of these mics. The AT2020 does have one little advantage with a higher noise handling of 144 dB SPL.

Audio-Technica’s mic is an affordable solution for vocal recording. You won’t get the warmth and other qualities that the NT1-A provides, but it costs a lot less and gives enough of a punch for the price.

It’s great for home recording or things like podcasts, but it’s not suitable for professional applications. If you’re starting a podcast or just want to record some vocals for fun or YouTube, the AT2020 is a great choice. If you want a bit more quality, the AT2035 is also a good option that doesn’t cost too much more.

But if you want to create professional level vocal recordings, be it singing or rapping or speaking, the Rode NT1-a is the perfect choice for anyone on a budget. If you have a bit more money to spend, check out the next section below. 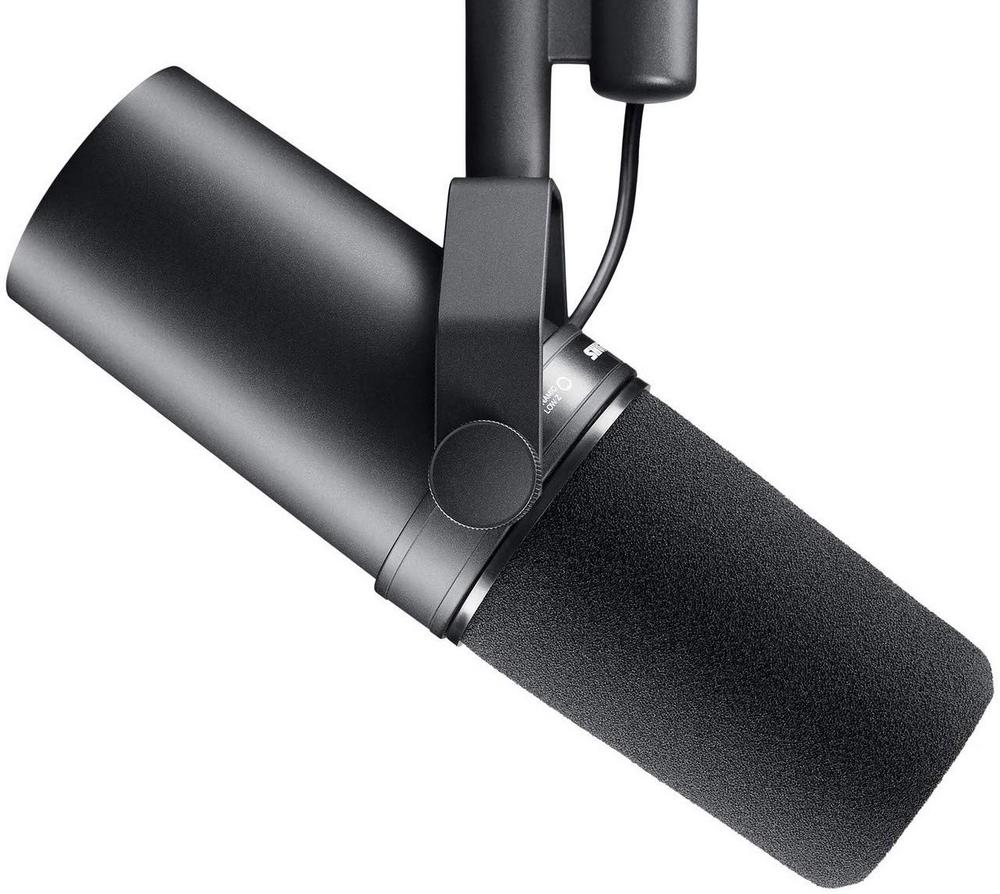 Shure’s SM7B is a higher-end option. Although it has a slightly narrower frequency scope, from 50 Hz and up to 20 kHz, it has a flatter territory in the mid-section and a slight low-end cutoff. As a result, the SM7B generally works better for solo vocals or speech at closer proximity than the NT1-A.

It’s pretty similar when it comes to the overall features, like the polar pattern and lack of controls. What makes the SM7B very interesting is the specially designed internal shock isolation, with gets rid of all the potential unwanted mechanical noise. The mic also has its own pop filter that allows some low-end roll-offs for more stable vocal performance.

The whole thing is rounded out with a very sturdy build and a more modern design. It only takes a quick glance to see that the Shure is more expensive than the Rode.

But there is one big difference. Even though both mics are designed for home and studio recordings, the Shure is actually a dynamic mic. These are generally preferred for live performances, but Shure has delivered a dynamic mic that is ideal for studio work. It is the better option here for recording studio vocals, but it also costs more. If you are on a budget, the Rode is easily your best option.

Check out our full review of the Shure SM7B.

Although not very versatile, the Rode NT1-A is a solid microphone for a very good price. Though it sits somewhere between inexpensive and expensive, it is actually a great price when you consider that you’re getting a quality condenser mic.

It is so good that you’ll find it in some professional studios, but it’s more of a higher-end home recording solution with its design and features. For professional work, you’ll probably want to spend a bit more and get something like the Neumann TLM 103.

As expected for a budget mic, a few useful features are missing. An additional switch for a low-end cutoff would be nice, and it’s not clear why such a simple and useful feature was not included. Depending on the setting, it might get a little tricky to work with, as some consonants might cause sudden boosts and pops in the lower end. You definitely want to use the included pop filter.

If you want recording quality that comes close to the professional level, but that costs far less, the Rode NT1-A is by far the best option on the market. But there are obviously better mics out there (that also cost a lot more). That is why the Rode gets an overall Musicaroo rating of 4.5 out of 5.