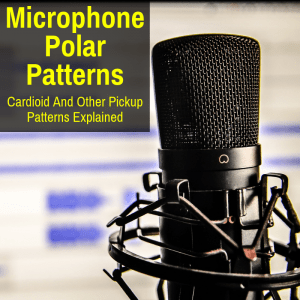 Those are two types of microphone pickup patterns and I realize reading that probably doesn’t clear much up.

But we’ll take care of that.

Microphone patterns show the zones around the microphone where that mic picks up sound well and where it does not pick up sound at all.

Depending on your needs, you might need a mic that only picks up sound from a source directly in front of it and blocks out sound coming from all other directions.

Whatever your needs, there is a mic or a combination of mics that will meet those needs.

But you need to know the different pickup patterns for mics and what their best uses are, before you can decide on the right one.

Microphone Polar Patterns: The 5 Most Common

The following polar pickup patterns are the five most common ones you will encounter. I’ll explain exactly how each one picks up sound and for which uses it is best suited. The cardioid pattern is the most common unidirectional microphone pickup pattern. The definition of cardioid is “heart-shaped” and a quick look at the diagram to the right shows where it got its name.

A microphone with a cardioid pickup pattern only picks up sound from sources located in front of the mic and minimizes any sounds coming from behind. This makes them great for studio recording, even in rooms with poor acoustics.

And since cardioid mics pick up nothing from behind, you can easily place monitor speakers directly behind them and get no feedback. One of the best cardioid mics available is the TLM 103.

Microphones with cardioid polar patterns are perfect for a single sound source, like one singer or speaker. They work especially well in these situations: This means a supercardioid mic is ideal for a single sound source in a loud environment, because it does a great job of blocking out all sounds that aren’t coming directly from the front. But, because it also captures sound in the rear, you have to be careful not to place monitoring speakers directly behind the mic, like you can with a regular cardioid mic.

The hypercardioid pattern takes the supercardioid one step further. It is even more focused toward the front, blocks out anything from the sides and picks up more sound from the rear.

As such, a hypercardioid microphone is used mainly in loud environments where ambient noise needs to be blocked out. Because the pickup zone is so narrow and it picks up more sound from the rear than other cardioid mics, special care needs to be taken with mic placement. More info on this pattern here. Omnidirectional microphones, by definition, pick up sound from all directions equally. As a result, their polar patter is a perfect sphere.

Obviously, this means you will pick up any sound in the environment. This makes for a very natural-sounding recording, and is great if you are trying to capture everything around you or a multitude of sources at once, like a complete orchestra.

The omnidirectional microphone pattern is not well-suited for use with a single sound source, like one speaker or singer singing into the mic.

It would only make sense if you are purposely trying to capture every other sound in the environment along with the single source. For that reason, cardioid mics are much more commonly used these days.

What is an omnidirectional microphone used for? Basically, you use one when you want to capture every sound that is in the area. For example, if you are recording an entire orchestra or if you are recording drums in a drum room. The omni polar pattern is also good for talk shows or movie or TV sets where only one mic is in use, rather than each person having their own mic. A figure 8 mic pattern picks up sound equally from the front and the rear, but nothing from the sides. The pattern basically looks like the number 8. At first glance, it would seem figure 8 mics are only used for duets, but how often do you see a duet where the signers are facing each other from opposite ends of a microphone?

The most common uses for mics with a figure eight pickup pattern are for stereo recording and if you want maximum isolation of off-axis sounds. Figure eight mics allow you to isolate instruments that are positioned close to each other, since these mics pick up no sound whatsoever from the sides.

There are other pickup pattern, but these 5 are the most common. Almost every microphone you find will have one of these polar patterns. Hopefully you now know the difference between them and which one is best suited for your needs.

Please let me know in the comments below if you have any questions or comments concerning microphone polar patterns.