Don’t know the difference between a violin and a viola?

And there is a good reason for that.

These two instruments are very similar and are often confused.

That said, while they are closely related, they each have distinct features that set them apart, in both appearance and performance.

In this article, we will examine all the major characteristics of the viola and the violin and see exactly where they differ. By the time you reach the end, you will never confuse these two string instruments again.

What Is The Difference Between A Viola And A Violin?

Let’s examine that main characteristics in turn and see where the differences lie. The viola is slightly larger than the violin. Placing the instruments next to each other makes this clear.

The viola is both longer and wider. The average body length of a violin is around 14 to 13 inches. A viola generally ranges in length between 15 to 18 inches.

The pitch of any string instrument is directly related to the strings. The viola and the violin have three strings in common, but where the viola has a C-string as its fourth, the fourth string on a violin is the higher E-string. This gives the violin a higher range.

In fact, the violin is the highest pitched stringed instrument, while the viola is the second highest. The lower range and more somber tone is what makes the viola an attractive choice to many musicians and music fans. The order of strings on a violin is: G, D, A, E. The order on a viola is; C, G, D, A. As mentioned in the previous section, the viola plays in a lower range.

The viola is larger than the violin and it has heavier strings and a larger bow. The difference in size means a slightly different technique is required to play each instrument.

Both instruments are played with the body supported by the player’s left shoulder and the jaw resting on the chin rest, but the viola requires a bit more strength to keep it firmly in the correct position. This is one of the biggest differences between the violin and the viola. Violas use an alto clef, which uses the C clef and is actually very easy to read, though it might take a bit of practice.

The alto clef was popular in the Baroque period, but these days, it is only ever used by the viola. Sometimes viola music will also contain notes in the treble clef. For this reason, many violists can read both clefs.

The violin is played in the treble clef, which is also known as the G clef. As mentioned, the violin is the highest ranged stringed instrument and, for that reason, it is known as the “soprano voice” of any orchestra or ensemble.

Speaking of orchestras, they generally include two sections of violins and only one viola section. The violin is actually the only string instrument with two sections in a symphony.

Violas have a deeper sound than violins. This is due to the differences in the size and arrangement of the strings. The viola’s thicker strings slow down their sound compared to a violin.

Both instruments possess the G, D, and A strings, but they produce a different tone on the viola than on the violin. Violins are commonly used to play the melodic portions of a piece of music, while violas are used for harmonic parts. The violin is one of the most popular instruments, because it is used in many different genres of music, both modern and classical. It fulfills a similar role musically as the lead guitar and is commonly used in pop and jazz, in addition to classical music.

The viola plays a large role in some classical and Baroque pieces and is also commonly used in chamber music, like string quintets. In modern times, very few pieces are composed specifically for the viola.

The viola is actually an improved version of the violin, although the timeline and exact history is disputed. 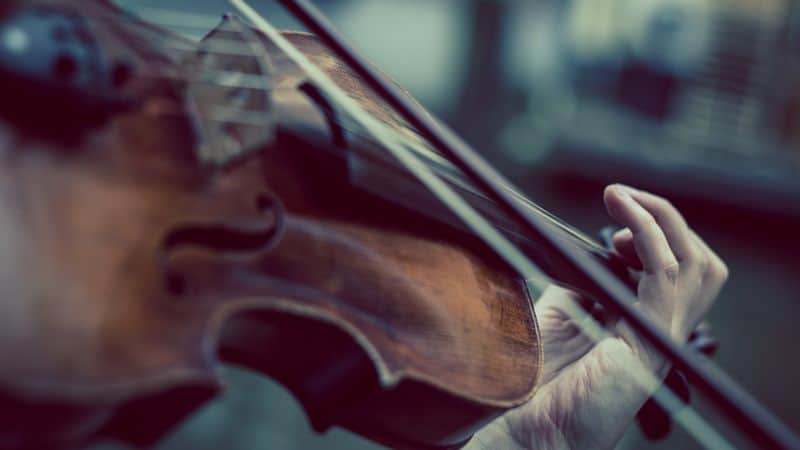 For beginners, the violin is more common than the viola, mainly because it is more prevalent and better known. It is more complicated to learn, though.

For that reason, as learners progress, some actually prefer to switch to the viola, simply because it is easier to learn to play. Deciding which to play is not always easy.

The majority of children who take music lessons, learn to play the violin and many parents will enroll their child in violin lessons as early as 3 years of age. Due to the tough competition and the complexity of learning the violin, many eventually look into alternatives and this is when they begin to look at the viola or the even larger cello.

In French, the viola is known as “alto” and in Germany it is known as “Brastshe.” The violin is known as “violon” in French and as “Geige” in German. In Turkish it is called “Keman.”

Both instruments generally have four strings, but the violin can sometimes be built with five strings.

Difference Between A Viola And A Violin: Final Thoughts

As you can see, despite the many similarities between the violin and the viola, there are also a lot of differences. Not only do they look different and sound different, they are each very distinct instruments that fulfill unique purposes.

While the violin is the more prestigious instrument, it also has a lot more competition and is more difficult to learn. For that reason, it may make more sense for a new learner to choose the viola instead.

Hopefully this article has not only explained the differences between the viola and the violin, but also helped you decide which instrument is the right one for you, if that is a question with which you have been wrestling.

If you have any additional questions or comments, please leave a comment below.