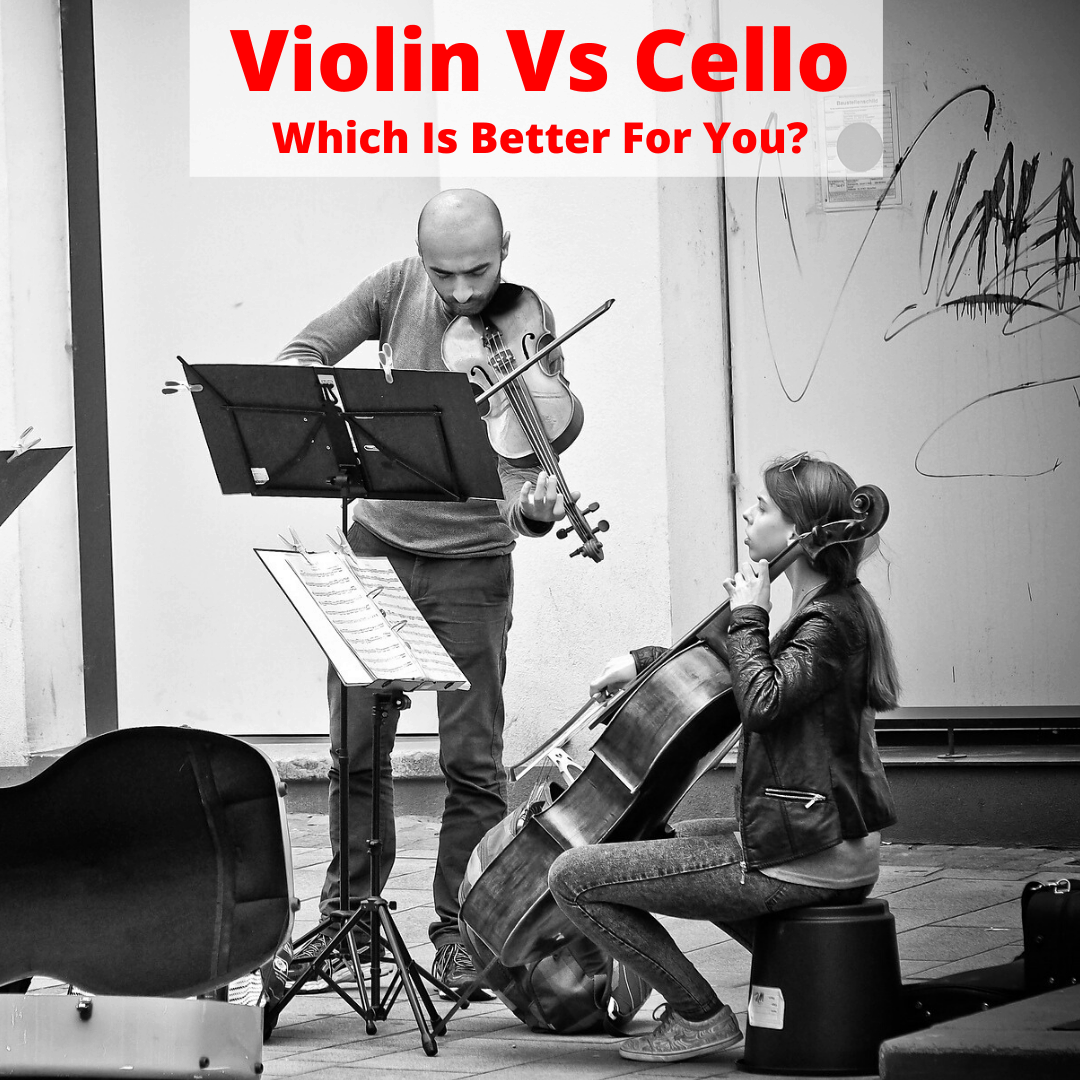 The cello is really just a big violin, right?

Yes, but also no.

The two do look very similar and they are played in a similar fashion, but they are actually quite different.

They size and weight obviously differs, but so does the way the sound, the way you hold them while playing, the cost, the demand for professionals who play them, and the level of competition you face.

So which is better?

Neither. Both are wonderful instruments.

If you are trying to decide between the two, the good news is: you can’t go wrong either way.

We’ll cover all the differences and similarities and also help you figure out which instrument is better for you. Let’s begin with the basics.

You have probably seen a violin before. Even if you haven’t seen one, you have almost certainly heard it in some capacity, whether listening to Spotify or watching an orchestra, or a folk band with a fiddler. Whatever your existing familiarity, here are the basics you need to know about this instrument.

Features Of A Violin 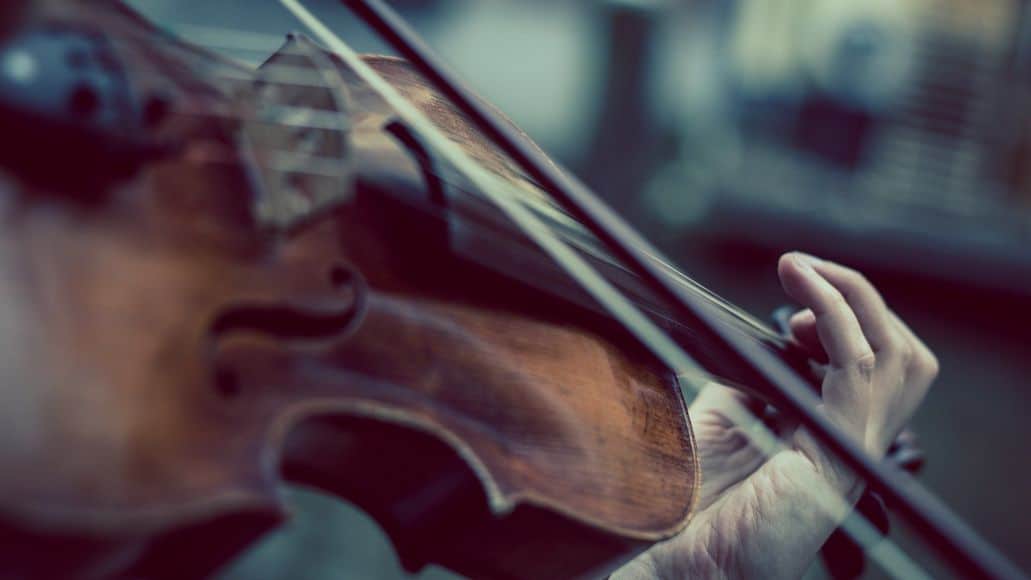 Books and various online resources describe the violin as a four-stringed instrument. Typically, that is true—most violins have four strings, namely G, D, A, and E.

But there are also five-stringed violins available. These include a C string in addition to the usual four strings previously mentioned. Six and seven-stringed violin also exist, but they are rare. Their additional strings are F and B♭.

The body of a violin is like an hourglass, but with an arched top and back. The shape is formed by multiple bouts: two upper bouts, two lower bouts and two concave C-shaped bouts that form the waist. This pinched waist provides a space for the bow to move through during specific points of playing.

The body of a classical violin is usually made from different types of wood, like boxwood, ebony, maple, poplar, rosewood, spruce, and willow. Luthiers (violin makers) prefer old-growth trees, especially those that are grown in higher altitudes, because they are denser, harder, and stronger.

Some distinctive features of the violin include the scroll, as well as various fittings. These fittings include the chin rest, the tailpiece, and the bridge. The scroll has four pegs, to hold each of the four violin strings in place.

Some violins have four fine tuners at the tailpiece, and some only have these adjusters for the A and E strings.

To produce sound, a violinist can do two things in general. Use the bow and draw it against the string (or strings), or use your finger and pluck the strings. Other than drawing the bow, advanced techniques include hitting the strings using the bow and more.

The violin is known for mimicking the human voice. To appreciate the way it sounds, watch the video below:

You may have seen videos of The Piano Guys or come across an orchestra poster with an oversized-looking violin, and wondered what that instrument is. Well, that is the cello. It is a stringed-instrument that is very similar to the violin, but also quite different.

Features Of A Cello

Here are the different parts of the cello that you should know before deciding on buying this instrument. The typical cello has four strings—A is the highest and thinnest string followed by D, G, and C, which is the lowest sounding and thickest string. These strings are strung down the length of the cello, over the fingerboard and the bridge, and kept in place by the tailpiece at the end of the instrument.

Like the violin, the body of a classical cello is constructed from wood (either from a spruce tree or maple). Some other variety of wood can be used as well, depending on the luthier’s choice. Near the bridge, cello.

The cello has bouts and a waist too, just like the violin, for bow clearance and to maximize the production of sound. Other components include a bridge, pin thumb screw, fine tuners, fingerboard, tuning pegs, and scroll. See the image below for reference.

And, in contrast to the violin’s end pin, the cello has a spike (also called pin rod) at the bottom. The pin rod is a retractable piece of wood or metal that makes contact with the floor and serves as an anchor to the ground while playing.

The cello also comes with a bow. Sound is made by plucking the strings, called pizzicato, or by using the horsehair part of the bow.

To appreciate the cello and how it sounds, watch the following video:

As mentioned above, cellos have the form, look, and function of their smaller counterpart. They both have four strings, hourglass shape, and certain ways of playing. They are similar in many ways, but the ways they differ are key.

Differences Between Cello And Violin

There are a lot of differences between a cello and a violin, but we only included the most important here. These are the ones you need to be aware of. 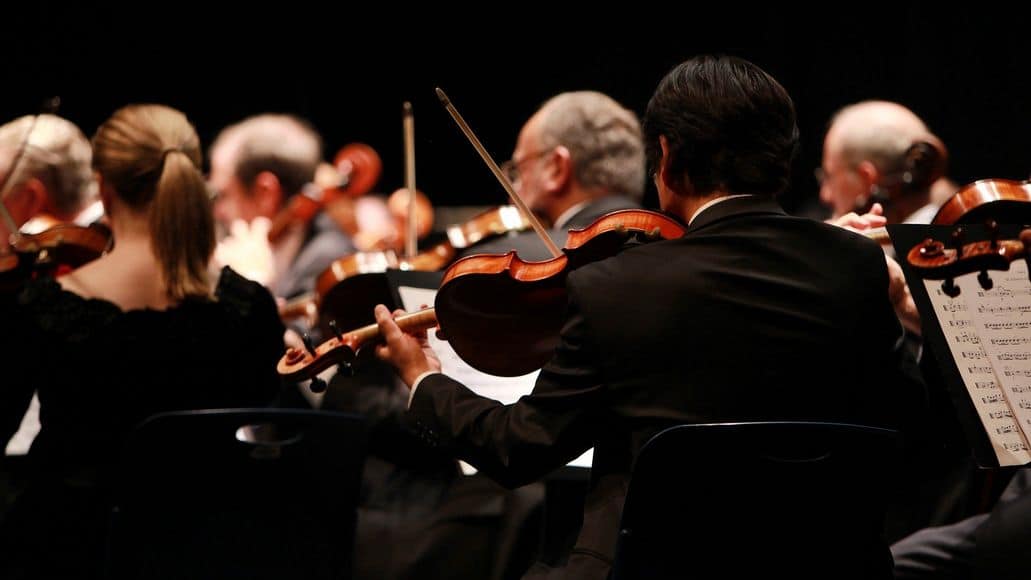 The primary difference between a violin and a cello is the size. They have the same fractional names, like full size, half size, three quarters, and so on, but this doesn’t reflect the accurate measurement of each instrument.

For instance, if we take a full-sized cello and a full-sized violin, the cello will be twice as tall as the violin.

Depending on the violin maker, a full-sized violin can be up to 23 inches, or 58.2 centimeters, measured from the endpin to the scroll. On the other hand, a full-sized cello can be as tall as 47.6 inches or 120.9 centimeters. 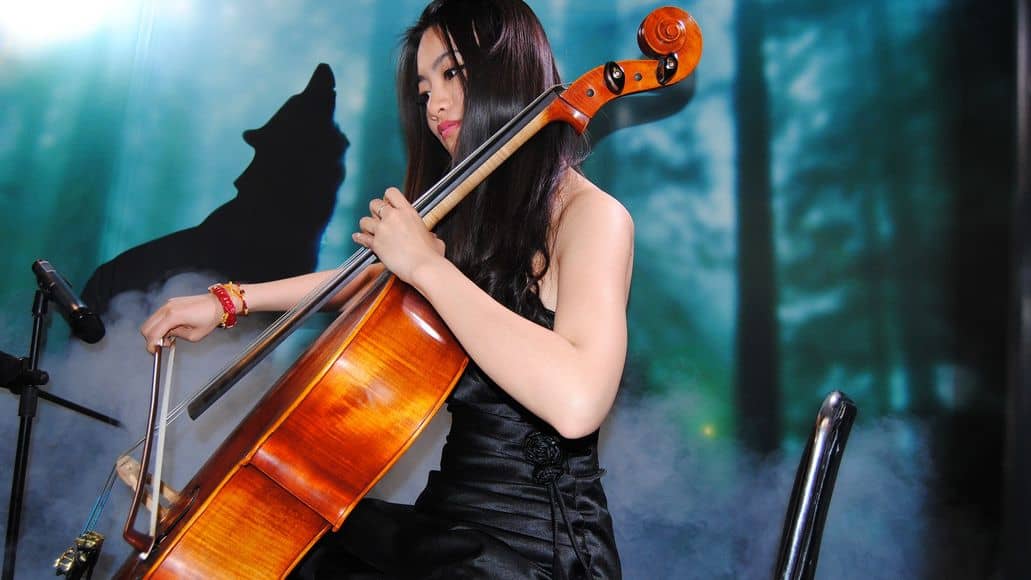 Another significant difference between a violin and a cello is how they are played. A violinist positions the violin between the chin and the shoulder, while a cellist places the cello upright between the knees, with the spike touching the floor. It makes sense, because the cello is far too large to be positioned under the chin.

The violin can be played either sitting or standing. Musicians who play the cello usually sit on a stool to play the instrument. Some kinds of cello can be played while standing up, but it is a little bit challenging, because the knees function to stop the cello from moving or rotating.

You can rig come kind of device to allow you to play the cello while standing up, but why bother. Most cellists prefer to play while sitting down.

In addition to differences in playing position and size, the sound each instrument produces is also different. The cello produces low, rich sounds, while the violin, has a higher pitch and doesn’t have as wide of a usable range as the cello.

Musicians tune cello strings to A, D, G, and C—from the lowest pitch or thickest string to the thinnest. Violin strings are tuned to G (lowest and thickest), D, A, and E. The thickest cello string (the G string) is a full octave lower than the violin. As should be obvious given the size and weight differences, the violin and cello differ greatly in terms of portability. Since violins are small, you can just tuck them in a case and carry them anywhere you go.

The cello can also be carried, but it is obviously more difficult. In addition, more restrictions apply in many forms of public transport, which have a specific set of rules for larger instruments.

Other differences between the two include weight, material construction, string-length or gauge, the bow, and compositional requirements.

Advantages Of The Violin

For many centuries, the violin has been a favorite instrument around the globe. More people play the violin than the cello and that is due to the advantages it has. Why do more people prefer the violin?

The first reason is obvious: the size. As the smaller instrument, the violin is more portable. That makes it much easier to take with you and much less of a hassle. Being smaller also make the average violin much less expensive, which is a big factor for parents who are getting their child into an instrument.

Another major advantage is that there is far more need for the violin in a professional setting. A violinist will have more opportunities to find work than a cellist. On the flip side, this also means stiffer competition, because the most talented children tend to play the violin.

Many people also prefer the tone and range of the violin. This might be because they are very similar to the human voice.

Advantages Of The Cello 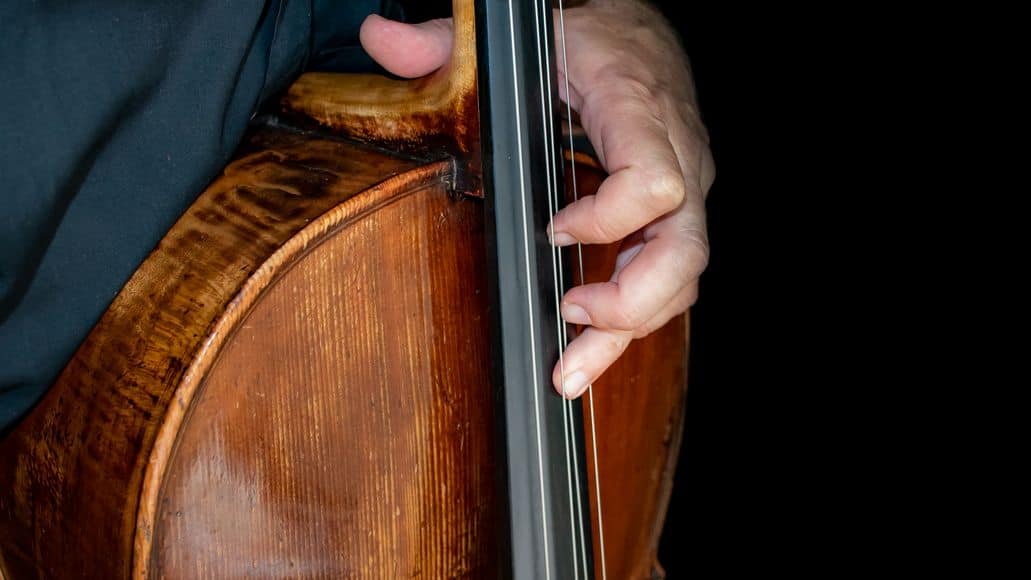 While the practical disadvantages of the cello, like the size and price, are obvious, the advantages are not so easy to see. But they exist.

For one, many prefer the lower register and love the darker and moodier tones. The other big advantage is that there is much less competition. Even though there is less demand for cellists, the fact that there are far fewer good ones means you often actually have a better chance of landing a job.

Who Should Learn The Violin?

There is no specific age range for people who are interested in playing the violin. If you want to learn how to play it, there is no stopping you. Many people even begin learning as adults and often teach themselves to play the violin.

The deciding factor in choosing the violin comes down to one of two things. Musicians who prefer not to deal with the large size of the cello should choose the violin.

Similarly, those who are on more of a budget should also go with the violin. Beginner violins are quite affordable, while even a starter cello is pretty expensive. Finally, go with the violin if you want to challenge yourself and compete against the best. Child prodigies almost always end up playing the violin, not the cello, Yo-Yo Ma notwithstanding.

Who Should Learn The Cello?

Whichever instrument you choose, learning to play will have tons of positive effects on your life. In addition to everything else, it will also benefit for your health. Many studies even say that playing an instrument can improve memory, school performance, emotional stability, and other benefits, including physical strength.

Why learn how to play the violin or the cello? Well, besides all the other benefits, there is no greater feeling in the world than expressing your emotions and pouring your heart out through your instrument.