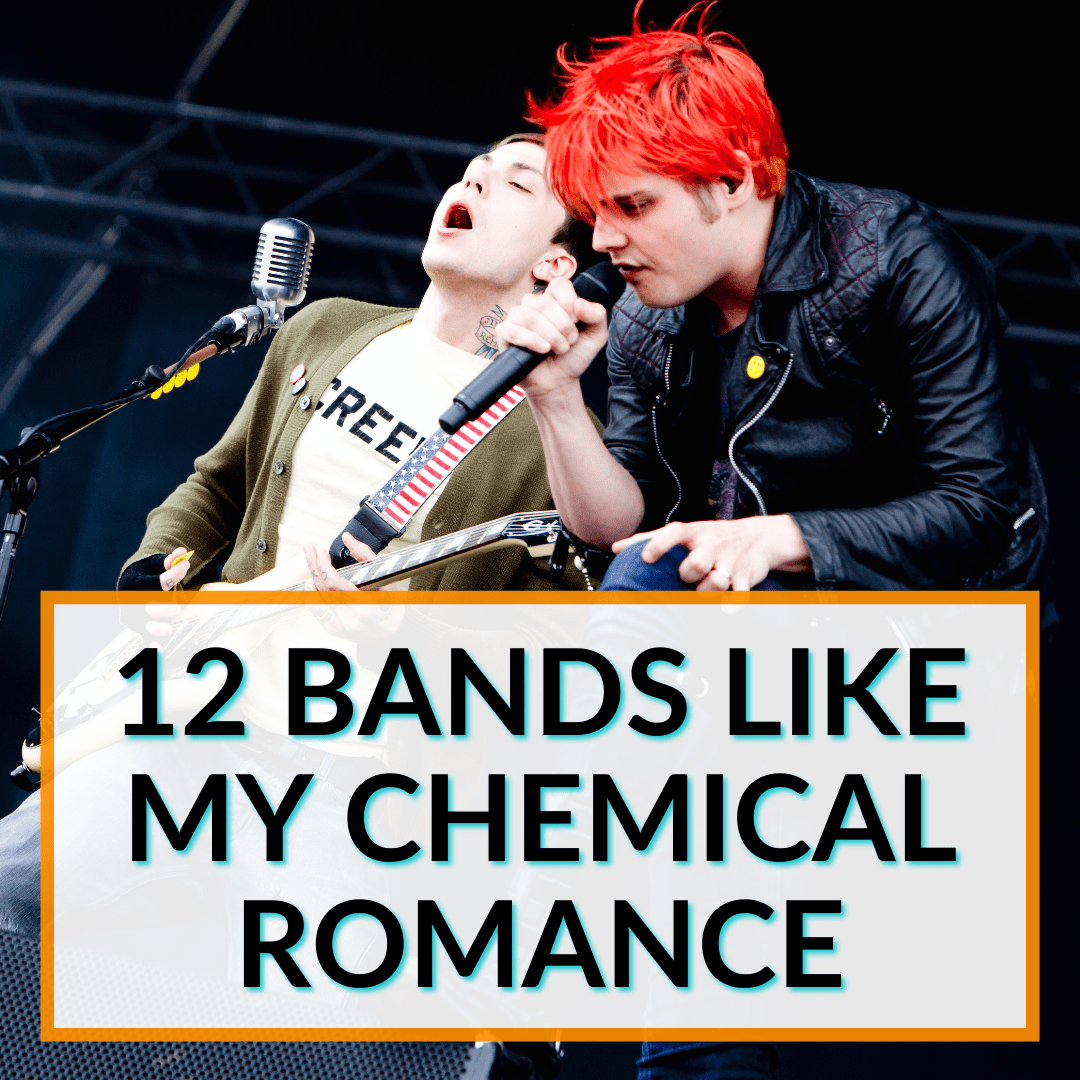 The struggle is over.

Below, we’ve compiled a list of the best bands with a similar sound and/or style.

Naturally, this includes quite a few pop/punk bands from the 1990s and early 2000s.

You couldn’t make this list without including those groups.

But we only included the best, along with (we hope) a few lesser known and perhaps more surprising choices.

Keep reading to discover some great new music that you’re sure to love if you enjoy My Chemical Romance.

If you want the easiest answer as to what bands are the most similar to My Chemical Romance, we’d start things off with Green Day. It’s the same classic pop punk style, but with their own unique twist.

What’s more, My Chemical Romance opened for Green Day during the American Idiot tour. Both bands also show up in our post on groups that are similar to Weezer.

Green Day is a trio that takes us all the way back to the late 1980s and the early 1990s. At the time, punk was generally seen as a somewhat aggressive genre that was not accessible to wider audiences.

But Green Day, led by singer and guitarist Billie Joe Armstrong, changed all that by combining punk with more easy-listening pop elements.

To this day, their third album Dookie, released back in 1994, remains Green Day’s pivotal work. You can start with this one, or you can also go with Nimrod or American Idiot.

Then we have a band like Fall Out Boy, which comes from around the same era as My Chemical Romance. What makes these bands so similar is the overall pop punk style.

But Fall Out Boy goes more into pop and emo pop styles. Since their formation in 2001, they’ve been led by vocalist and guitarist Patrick Stump, who’s also the principal songwriter for the band.

Although you can always recognize their signature style, they’ve experimented with a few different genres over the years. For instance, you can hear some R&B elements, as well as hardcore punk stuff in different songs.

Either way, Fall Out Boy are one of the safest bets if you want to try out music that sounds like My Chemical Romance.

Coming from Utah, The Used is another band that formed in the early 2000s. They lean more towards the typical emo stuff, although there’s still the classic pop punk foundation in their music.

From their foundation to now, their creative aspects have mostly been dictated by singer and pianist Bert McCracken. Aside from McCracken, the only other original member in the fold is bassist Jeph Howard.

With eight albums under their belt, there’s a lot of interesting stuff worth checking out. We’d advise you to start with their early materials first, since it is most similar to what My Chemical Romance is doing.

Shoulder to shoulder with pop punk giants Green Day, Blink 182 are another example of how a trio can create an incredibly full sound.

Ever since 1992, they’ve been blessing the world with some of the finest pop punk we’ve ever gotten the chance to hear.

Although the band no longer features their classic lineup since the departure of Tom DeLonge, he’s been replaced with Matt Skiba who’s also a great guitar player and a singer. Mark Hoppus and Travis Barker are still there.

At this point, they hold legendary status among rock fans. And if you’re a My Chemical Romance fan and still haven’t gotten the chance to hear Blink 182, we’d strongly advise you to do so. You’ll be amazed.

Pierce the Veil never reached the high status that they deserve. Formed in 2006, they released their debut album in 2007. From then to now, they’ve released only four full-length studio albums.

However, their material is honest and features no fillers. As far as commercial success goes, their third album, 2012’s Collide with the Sky, has achieved the biggest success so far.

And we recommend Collide with the Sky as the easy way to get into Pierce the Veil. Their overall style is often described as post-hardcore, which makes them a bit heavier than My Chemical Romance.

But the classic pop punk stuff is in there as well. If you’re looking for a slight boost in heaviness and even some clever songwriting practices, then Pierce the Veil is the band to check out.

Coming from Las Vegas, Nevada, Falling in Reverse is yet another band that you’ll like if you’re into My Chemical Romance. Once again, we have an emo post-hardcore group.

Starting their work in the late 2010s, they have four studio albums and one EP released so far. If we were to compare them to My Chemical Romance, there’s an obvious boost of heaviness.

You’ll also notice some classic metal elements in there, and even harmonized guitar parts. But you still get to hear those catchy and pop-inspired choruses and passages in their songs.

To get you started, we’d recommend their earliest stuff, possibly the debut album, 2011’s The Drug in Me Is You.

If you’re into classic emo stuff, but with the cheerful twist to it, then check out All Time Low. Formed in 2003, they launched their debut EP, titled The Three Words to Remember in Dealing with the End, in 2004.

Their debut full-length record The Party Scene dropped in 2005. Albums then lined up every couple of years or so, all while keeping the same exact lineup since the debut record.

They’re very similar to some of their influences, which include Blink 182 and Green Day. Nonetheless, you can still notice their distinct style, which you’ll enjoy if you’re into My Chemical Romance.

Good Charlotte is an easy pick for a list like this one. There are obvious similarities between them and My Chemical Romance. If you haven’t gotten the chance to hear them, there’s a high chance you’ll like their stuff.

The band is led by identical twins Joel and Benji Madden. Benji is a guitar player and he does most of the music, while Joel does the vocal duties and also has great creative input.

At this moment, their discography consists of seven albums. 2002’s The Young and the Hopeless is their most successful record, selling over five million copies worldwide. It is the best record to start with.

Jimmy Eat World is a classic cheerful pop punk band, with some influx of emo stuff. They’re more in the vein of Blink 182 or Green Day, but there are still some obvious similarities between Jimmy Eat World and My Chemical Romance.

Of course, they formed back in the early 1990s, so there’s a chance that they actually influenced MCR directly or indirectly. Between then and now, they’ve had quite a prolific career, releasing 10 albums in the process.

There’s definitely some great stuff in there that you should check out. The easiest way to get started with Jimmy Eat World would probably be with 2001’s Bleed American and 2004’s Futures.

Revenir isn’t exactly the most commercially successful band. But they feature Matt Pelissier, My Chemical Romance’s original drummer. They have one album so far, 2015’s Exiled From Bear Country.

Sure, there’s not much material to listen to, but the album is actually pretty good. You won’t find much info about them online, but the music is good. It’s similar to My Chemical Romance, but it has a slight dash of classic heavy metal to it.

Although they do kind of have a creepy name, Creeper is an awesome band. Mostly delving the into horror punk style, there’s an obvious influence of pop punk, emo, and gothic rock.

If you enjoy the darker aspect of My Chemical Romance’s music, then Creeper is the kind of band that you’re looking for. What’s really interesting is that they’re a relatively younger band. Well, at least much younger than most names on this list.

Formed in 2014, they have only two full-length studio albums so far, as well as six EPs. And they’re really easy to get into, especially if you like the idea of gothic rock and pop punk working together.

Paramore was one of the easiest picks for this list. They and My Chemical Romance are from the same generation. And although their respective styles aren’t completely the same, the Paramore and MCR fanbases often overlap.

Paramore is a trio led by Hayley Williams. The band is usually associated with her, which is not a surprise since she’s been the sole constant member over the years.

Starting in 2004, they’ve racked up five studio albums so far. Although that’s not much, they did their work thoroughly and focused on bringing quality rather than quantity.

With that said, all of their stuff is worth checking out. We’d advise you to start with the early material and move on from there. You won’t be disappointed.

We hope you found some great new music among our recommended bands like My Chemical Romance. For some harder versions of the pop punk sound, read our article of groups similar to A Day To Remember.

Do you feel all of the bands we included belong on this list? Are there some missing groups that should have been included? Feel free to let us know in the comments below.

Finally, we are obviously all thrilled that the long wait for new MCR music is over! We celebrated by doing a deep dive into the The Foundations of Decay lyrics meaning.