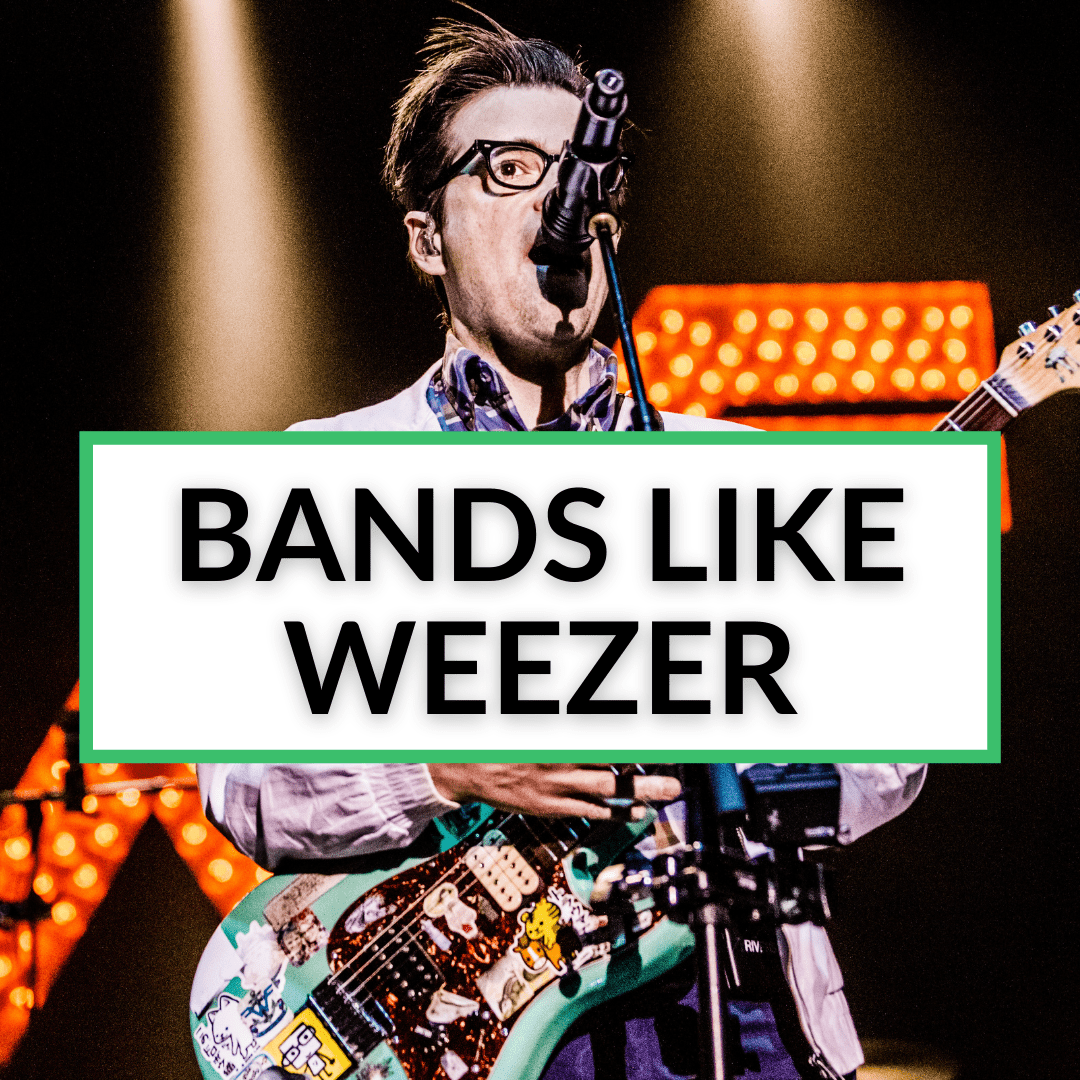 Weezer took the world by storm in the 1990s.

They were the geeky, yet cool, band that made weird, but catchy, tunes.

And many of those tunes became huge hits.

If you’re looking for some other bands like Weezer to give you more of that style of music, you’re in luck.

There are plenty of good ones out there. We’ve compiled the best of them in our list below.

Keep reading for some more great music in the vein of Weezer.

The Pixies influenced a whole new generation of musicians that emerged during the 1990s and onwards. They are actually the primary influence listed by Kurt Cobain of Nirvana.

Starting their work in 1986, they immediately became known for their bold and somewhat experimental style for the era. They’re mostly known for their frontman and creative leader Black Francis who does most of their music.

But they also featured two incredible women on bass. Both Kim Deal and Paz Lenchantin made our list of the greatest female bass guitar players.

The Pixies are one of the main bands that influenced Weezer. In fact, they even went on a tour together in 2019.

The Pixies will be really easy to get into if you like Weezer. Any of their albums is a good choice to start, but we’d recommend that you go from the beginning and hear how they evolved throughout the years.

Next up, we’d like to mention a band younger than Weezer: Cage the Elephant. Although they started their work in Kentucky, they relocated to London in 2008, only two years after their formation.

And listening to their music, we understand the move, since they gravitate more towards the “traditional” British rock kind of style.

The band’s core lineup stayed the same over the years, and they’ve released a total of five studio albums so far. While they are unique and do their own thing, we can notice obvious similarities with Weezer. And if you’re a Weezer fan, they should be really easy to get into.

Aside from an obviously bizarre name, Death Cab for Cutie are a pretty interesting and unique band. We’re talking about America’s classic alternative rock, the kind that emerged during the late 1990s and the early 2000s. Led by singer and guitarist Ben Gibbard, they’ve been going strong since 1997.

With their debut album “Something About Airplanes,” they began developing their own unique style. It’s sometimes hard to put them in a specific genre category. However, listening to their work, we’re certain that Death Cab for Cutie will sit well with all Weezer fans.

Of course, it’s really hard not to include a band like Blink 182 on this list. In fact, both they and Weezer started their work around the same era. However, Blink 182 are more of a classic punk pop band, but with their own twist. Well, pop punk is kind of their twist since they helped create this genre.

The band has been working since the early 1990s and they’ve always worked as a trio. However, to many fans’ dismay, guitarist and one of the singers Tom DeLonge left the band in 2015 and was replaced by Matt Skiba, known for his work with the Alkaline Trio.

Nonetheless, they still remain a force to be reckoned with. They’re popular among fans of pretty much all genres, and we’re sure all Weezer fans will like them too.

And when we have Blink 182, then we must include Green Day as well. They take us a bit further back in rock music history, starting their work back in 1987.

Of course, the mastermind behind the band is vocalist and guitarist Billie Joe Armstrong. He and Mike Dirnt have remained since the beginning, but drummer Tré Cool rounds up the formation after his recruitment in 1990.

Although they already had a following, Green Day’s major breakthrough came with their third album. Released in 1994, Dookie is a genre-defining piece of work. We recommend that you start with this album, 2004’s American Idiot, or 1997’s Nimrod.

Coming from California, Cake not only bears a sweet name (pun intended) but is also responsible for shaping the American rock scene of the 1990s, ultimately impacting generations of new musicians.

As you can notice, it’s a rock band with a trumpet. Although somewhat unconventional, it worked perfectly for the band’s alternative rock style.

If you’re up for some experimentation, Cake have a lot of stuff to offer, even incorporating country music, jazz, funk, and even some middle-eastern folk music into their work.

The Presidents Of The United States Of America

Calling your band The Presidents of the United States of America is a bold move on its own. As if that wasn’t enough, this grunge and punk rock trio has pushed the boundaries with their work as well, ultimately inspiring new musicians to get into these genres.

What’s also interesting is that frontman Chris Ballew and guitarist Dave Dederer use specially modified instruments that are a combination of a guitar and a bass guitar. This allows them to do different parts when needed.

Clearly innovative in their work, we’d say that any of their six albums is a safe way to get into their music.

Ween predates Weezer, starting their work back in the mid-1980s. They originally started as a duo, featuring Mickey Melchiondo and Aaron Freeman. Remaining the sole constant members throughout the band’s history, they’re known for their stage names Dean Ween and Gene Ween.

They only started releasing music in the early 1990s, and have offered nine albums so far. They were on a hiatus between 2012 and 2015, but they haven’t released any new material yet since their reformation. Either way, if you like Weezer, we’re certain that you’ll like Ween too.

Sublime is one of the most underrated bands of all time. If you’re into the catchy and slightly poppy style of Weezer, Sublime’s music will sit well with you.

Although their career was cut short after frontman Bradley Nowell’s tragic passing, their legacy still lives on, with many bands like Sublime carrying the torch.

Working from 1988 to 1996, Sublime released three studio albums. There have been a few hits, like What I Got and Santeria. But we can’t stress enough how underrated their albums are. Therefore, we’d advise you to start with pretty much anything.

If you’re gravitating more towards the classic 1990s and 2000s pop punk, then we’d recommend Jimmy Eat World. Along with Green Day and Blink 182, they pretty much defined this genre during the ’90s.

Their music is, overall, pretty catchy, and fans of pretty much all genres can easily get into their stuff. If you’re a Weezer fan, then this will be super easy for you. The early material is pretty interesting if you’re into pop punk.

Queens Of The Stone Age

After the disbandment of stoner rock pioneers Kyuss, Josh Homme started his own band called Queens of the Stone Age. From 1996 to now, he remains the sole creative leader of the band, which makes QOTSA pretty much his solo project.

Be that as it may, there’s been a lot of interesting music released under this moniker. And the material is really diverse, going from some heavy stoner rock stuff up to some cheerful poppy songs.

But the overall vibe remains the same. There are some punk-ish elements in there as well, and you can certainly find stuff to enjoy if you’re into Weezer’s music.

The Offspring is one of those bands that everyone can get into. They have a nice collection of albums, and there’s good stuff on pretty much all of them. If you’re into Weezer, then getting into The Offspring will be a breeze.

The band’s style is more focused and they usually stick to their signature formula most of the time. However, what singer Dexter Holland and guitarist Noodles (real name Kevin John Wasserman) achieved with their music is unprecedented.

Although they stick to punk rock, they managed to add a different dimension to the genre. Albums like Americana, Smash, or Ixnay on the Hombre would be the easiest way to start with them.

As already mentioned, Alkaline Trio is Matt Skiba’s band. Although he joined Blink 182, he still does work with Alkaline Trio, too.

Although he’s the sole original member, bassist Dan Andriano and drummer Derek Grant have been members throughout most of the band’s career.

Alkaline Trio is a classic pop punk band with some emo-inspired stuff in there as well. At the same time, you can also notice the raw punk energy of bands like Sex Pistols or Buzzcocks. They have nine studio albums and we’d recommend that you go chronologically through their works.

Lastly, we need to mention the Foo Fighters on this list. This band’s success is something you don’t see that often in rock music, with fans and musicians of all genres praising their work.

After Nirvana’s disbandment, drummer Dave Grohl decided to start his own one-man band. Eventually, it turned into one of the most successful bands of all time.

Almost all of the band’s work is written by Dave Grohl. But other members have contributed over the years, especially bassist Nate Mendel and drummer Taylor Hawkins. All of their albums are pretty much awesome, so you can start with any of their material.

Weezer were always an unusual band with a penchant for writing catchy tunes. It comes as no surprise that many of those tunes became huge hits.

If you enjoy Weezer, we sure you’ll also like most of the bands like Weezer listed above. Do you agree? Or do you feel we should have included some other bands that we missed. If so, please let us know which ones in the comments below.