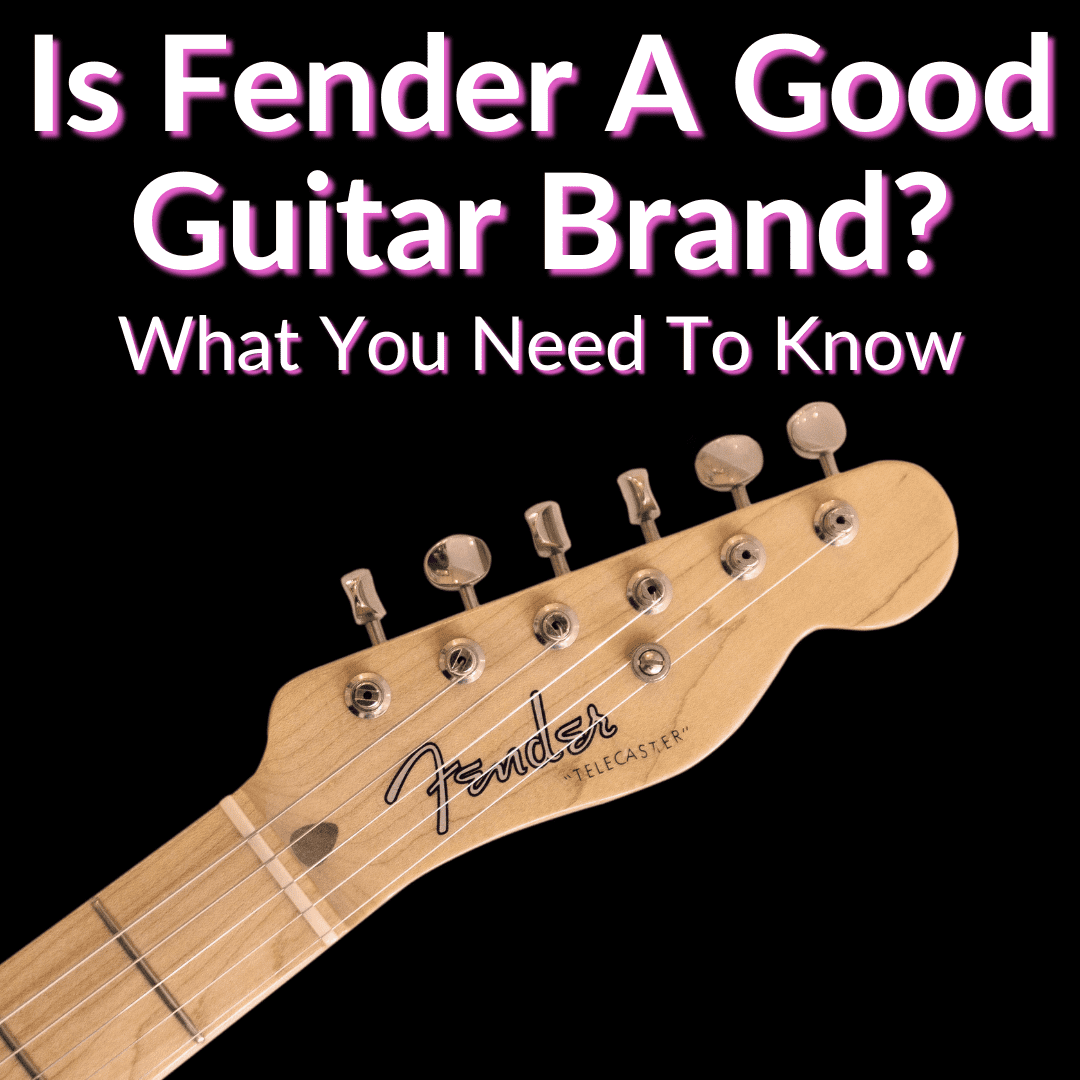 Two guitar brands come up more than any other.

If you know anything at all about guitars, you’ve heard of these two brands.

You know they have excellent reputations and that their guitars cost a lot of money.

But are they worth the premium price?

Is Fender a good guitar brand in terms of value for money, or is it just another case of overpaying for the brand name?

The truth is a little of both. Fender makes excellent guitars that are worth every penny. But there are other brands that give you more value for money.

Keep reading to learn exactly what makes Fender such a highly regarded guitar manufacturer and what bother brands might be worth a look if Fender guitars just aren’t in your budget.

Is Fender A Good Guitar Brand?

Yes, Fender is a good guitar brand. Fender is one of the world’s largest electric guitar brands, both in terms of sales and historical importance in the industry. In fact, many consider it the best guitar brand, period.

Leo Fender, the founder of Fender guitars, had an immense impact on the guitar world. In the 1950s he designed the Telecaster and the Stratocaster, the two most recognizable and imitated electric guitar models in history.

Many of the most famous guitarists in history have used Fender guitars and many still do today. The brand has not stopped growing on its way to become the titan it is today.

Many believe that the musical knowledge and skill of a guitarist is what determines the interpretation of a piece of music. This belief captivates the public who love to worship “guitar gods”.

But the quality and clarity of the sounds also depends on the instrument. It is essential to get a guitar that has the same capacity as the musician to produce the most harmonic sounds.

Many believe that Fender guitars have the ability to create unmatched sounds, which are easy to distinguish from other guitars around the world.

That is why many rock stars have used these guitars over years. There are even some musicians who have used them throughout their whole lives, because they knew they were guitars of excellent quality and materials from the first moment they heard their sounds.

Among the main virtues of Fender guitars is their weight. This feature is important, since the production of clear and harmonic sounds depends on it.

It is well known that guitars that are manufactured with heavier wood tend to have better harmony when playing melodies.

The greater the weight, the more stability the string has, meaning it vibrates for a longer time. Of course, you want to make sure you put the best strings for a Fender guitar on your Fender guitar.

In the case of rock music, the heaviest guitars are ideal for interpreting this musical genre. That is why dozens of famous musicians who play this genre prefer to use of Fender brand guitars. It guarantees the production of special sounds that are different from those of traditional guitars.

Another important element of a quality guitar like the ones produced by the Fender brand is resistance. This directly influences the timbre of the guitar.

The number of harmonics, as well as the low and high tones of the instrument, are produced because the instrument has a much more resistant wood.

It is important to note that the weight of the wood is directly related to the resistance. That is why buying heavier guitars (within standardized limits) is a better option to produce much more aesthetic sounds.

Undoubtedly, these two elements could not be achieved if the materials used were not of high quality. That is why the Fender brand has become one of the most prestigious around the world.

The material quality that Fender offers, in addition to the production processes, is simply unmatched. Fender guitars are high quality, efficient, and they offer virtues that many other lower-quality brands do not.

The first thing you need to do before buying a guitar from a famous brand like Fender, is to investigate the authenticity. Find out where the authorized dealers are in your area and only buy from them. Or have them authenticate any guitar you plan to buy from a non-authorized dealer.

It is unfortunate that there are many instrument stores selling replicas of original instruments. These are guitars that are exactly identical on the outside to the original Fender guitars, but the sound they produce is nothing like the signature sound produced by Fender-brand.

Fender guitars that are not original have not been manufactured by specialists and professionals in the field. They are not produced by specialists who have the right knowledge to offer instrument consumers the best quality and the ability to make instruments that produce the best sounds.

Through the Squier models, the Fender brand produces cheap electric guitars for around $200. In the factory in Mexico, they start at around $500. Fender guitars that we can consider “original” are made in the United States and start at around $1000.

If you don’t have the money for a real Fender guitar (or if you just don’t want to spend that much), Squier is a great alternative. Their pared down versions of Fender guitars cost much less, but still deliver great sound. This Bullet Strat is a great example.

They obviously can’t compete with a premium Fender guitar, but they give you a bit more value for your money.

Other options are guitars from other brands that use similar shapes (usually the Stratocaster body shape) and have similar features. Ibanez is one such brand. They make guitars in all price ranges, including the budget ranges.

Our favorite budget manufacturer is Yamaha. The Pacifica line from Yamaha is perhaps the best value on the market for strat-like guitars.

Both Gibson and Fender are well-loved all around the world. They are two very strong brands, that have both played monumental roles in the music scene for many years.

But in virtually all aspects, they are completely different guitars. As a result, most people feel there is no debate. They have a clear favorite and that is the best brand, period.

But the truth is both brands make incredible guitars that give you different sounds. As a result, many famous guitarists have used both, depending on what they were trying to accomplish. Even some guitarists who are famous for their almost exclusive use of one of the two brands.

For example, Page played a Gibson Les Paul on stage and a Telecaster in the studio. David Gilmour, who is known for his Strats, played an entire album on a Les Paul.

In the end, all that we can say is that both Gibson and Fender are manufacturers of high-quality guitars. Which is better depends on personal taste and whether a guitar with single coils (if we are talking about the usual Stratocaster and Telecaster) or a guitar with humbuckers is better for your needs.

Are Fender Acoustic Guitars Any Good

Their acoustic guitars are great for beginners. They don’t cost as much as some more established brands, but they are well made and they produce a nice sound. Professional guitarists generally prefer other brands, though.

The brand’s story speaks for itself. Fender makes great guitars in all price ranges. It’s all a matter of taste, but who doesn’t like a good Stratocaster?

Today, Fender is considered one of the top guitar brands in the world, along with Gibson and perhaps Ibanez.

The brand, created in the 1940s by Leo Fender in the United States, has become a benchmark in the string instrument market over time. Fender specializes in manufacturing its legendary electric guitars, but also has a wide range of amplifiers.

Guitar lovers have surely heard of the famous Stratocaster. This is the guitar that Jimi Hendrix burned on stage in 1967 in Monterey.

Likewise, other mythical and captivating Fender guitars have inspired the greatest musicians of the last century, and their legacy goes on to this day.

Many beginning guitarists dream of one day owning a real Fender guitar. But for most of us, they simply are not in the budget, especially when we first start playing the guitar. In that case, take a look at Squier’s guitars, and also Yamaha’s Pacifica line.