Even those who prefer the muddier Les Paul tone still know to appreciate the Strat sound.

But if you have the wrong pair of strings on your strat, you lose that tone. It just won’t sound right anymore.

Or you might want to alter that tone, to muddy it up, or to highlight it even more. The right pair of strings will help you here too.

The problem is: knowing which strings are best for a Fender Stratocaster.

Luckily, all you have to do is keep reading. We’ve gather all the top strings for your strats and strat clones.

We tried to include strings in a variety of budgets and ones that produce different kinds of tones. Read our brief reviews below, to figure out which of these string sets is ideal for your genre and playing style. 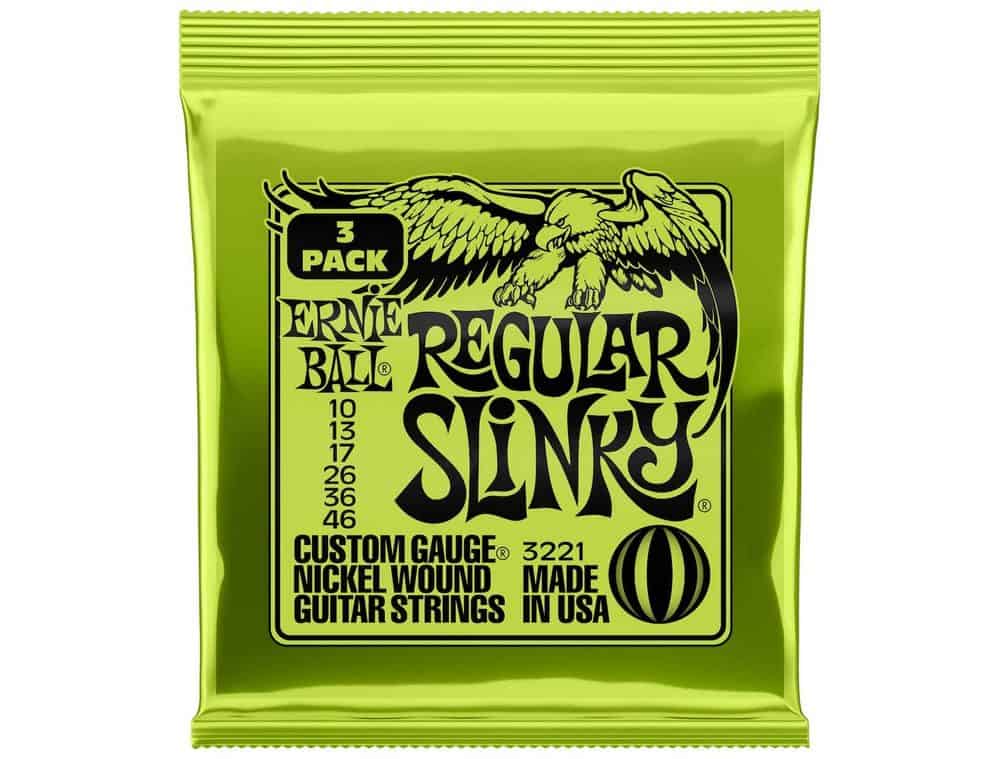 There’s nothing out there like the classic Fender Stratocaster tone. But in order to take full advantage of its sonic characteristics, you need a great set of strings to go with it.

Strings are one of the most underrated components of your tone. And if you’re playing a Fender Stratocaster of any kind, Ernie Ball Slinky strings are pretty much the “standard” at this point.

Of course, the series has several very interesting variants, covering different types of tones, as well as gauges. No matter which variant you choose, Slinkies give you the best combination of price, quality and performance.

They might not last as long as some of those super-protected string brands with expensive coating materials.

However, if you’re playing and practicing on a daily basis, then the cost turns out to be much lower in the longer run. In short, you can’t ever go wrong with the Slinkies, especially if you’re playing a Strat and you enjoy shredding with heavy picks. 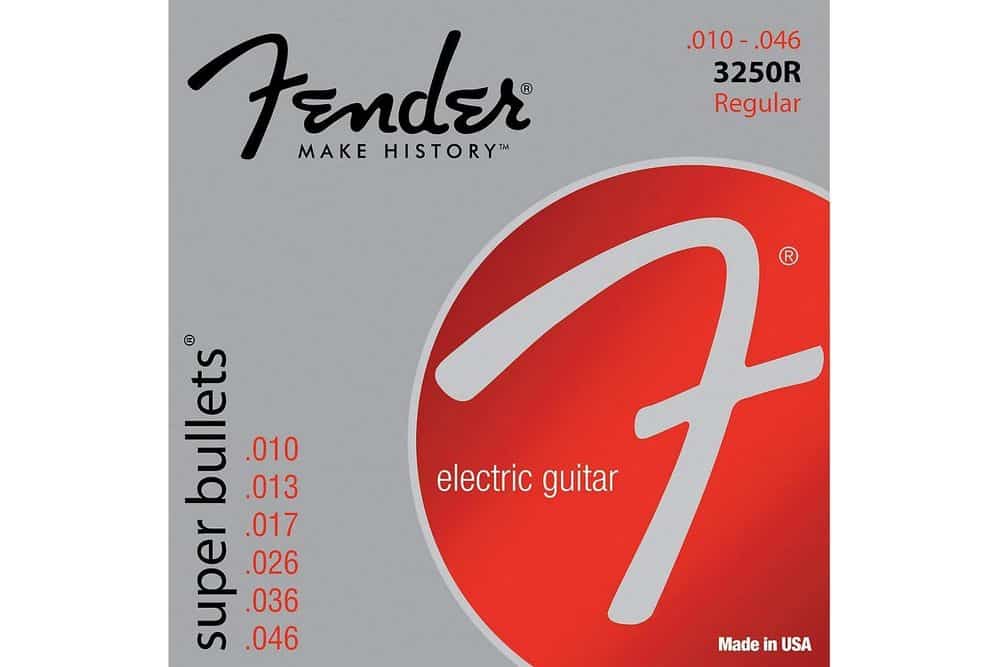 How could we avoid mentioning Fender strings when we’re talking about Fender Stratocaster guitars?

We consider Fender’s Super Bullets to be the best possible budget-friendly string set. These strings are as simple as it gets, although they do incorporate one very innovative feature.

Instead of the regular “ball” ends, they have, as the product name suggests, so-called “bullet” ends. These parts not only make it simpler to restring your Stratocaster but also add more mass, which is essential for adding more sustain to your tone.

This is especially the case with Stratocaster-styled tremolo blocks. These bulkier and heavier metal ends serve to further enhance the tone.

Best If Money Is No Object: Pyramid Gold 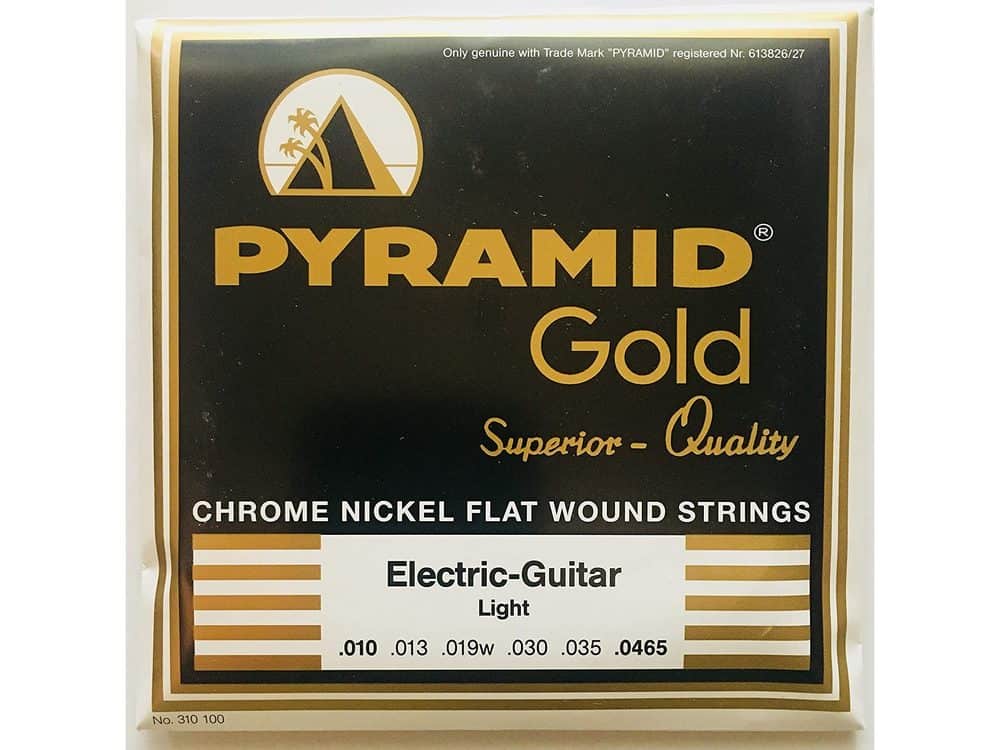 You don’t often stumble upon Pyramid Gold strings. And that’s no surprise. These are prestigious strings intended for those who are willing to pay more for a superior tone.

There are a few different variants, mainly differentiated by their gauges. The most important factor is that these are all flat-wound strings. And you don’t see that every day, at least not with regular guitar strings.

There are two things that some players love about flat-wound strings. First, they may feel much more comfortable to play.

Second, such strings give a noticeably smoother tone, which can come in handy for those who play Stratocasters. “Smoothening out” those “twangy” Strat tones may be a good idea if you prefer it that way, and flat-wound strings can help you do that. 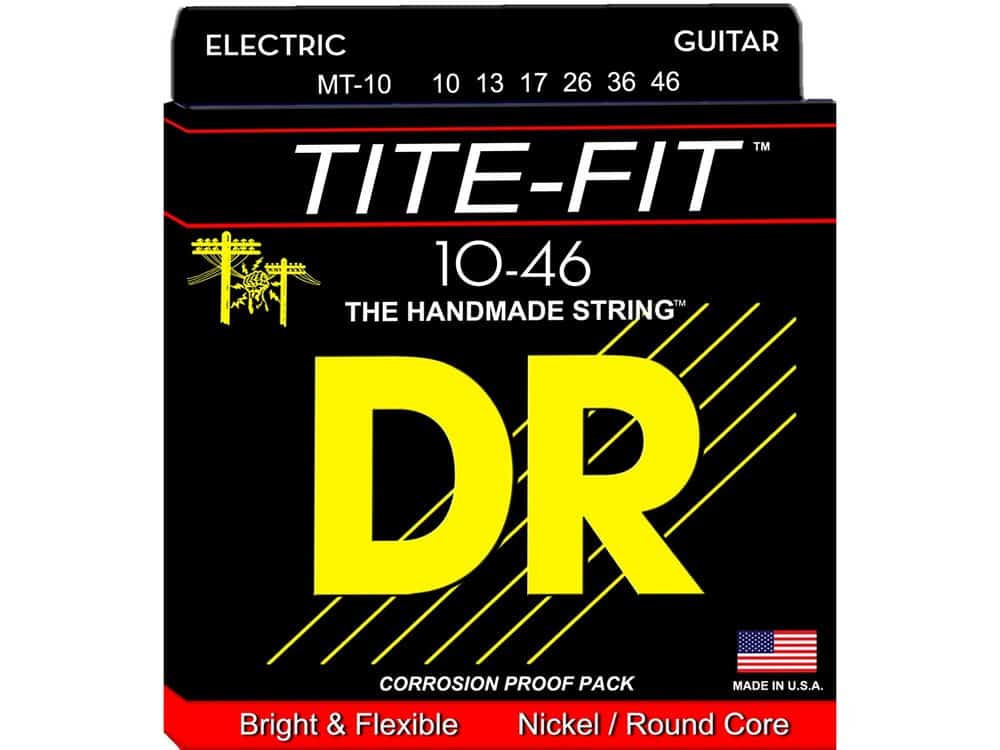 It’s no secret that many guitar players fit the struggling artist stereotype. As such, they are always looking for ways to save on their equipment. Guitar strings are no exceptions.

With this in mind, we’ve decided to include a second string set that keeps things within budget-friendly limits. That brings us to DR Strings and their inexpensive Tite-Fit string set.

Sure, you can’t expect a professional string set for such a low price. But we’re amazed by the qualities these strings do have at this cost level.

These simple strings with a round core come in all the different basic gauges. They’re fairly reliable, but pretty cheap as well.

If you’re worried they won’t last, you can always buy several packs, since they’re so affordable. Even experienced players use these strings as backups or for their practice instruments. 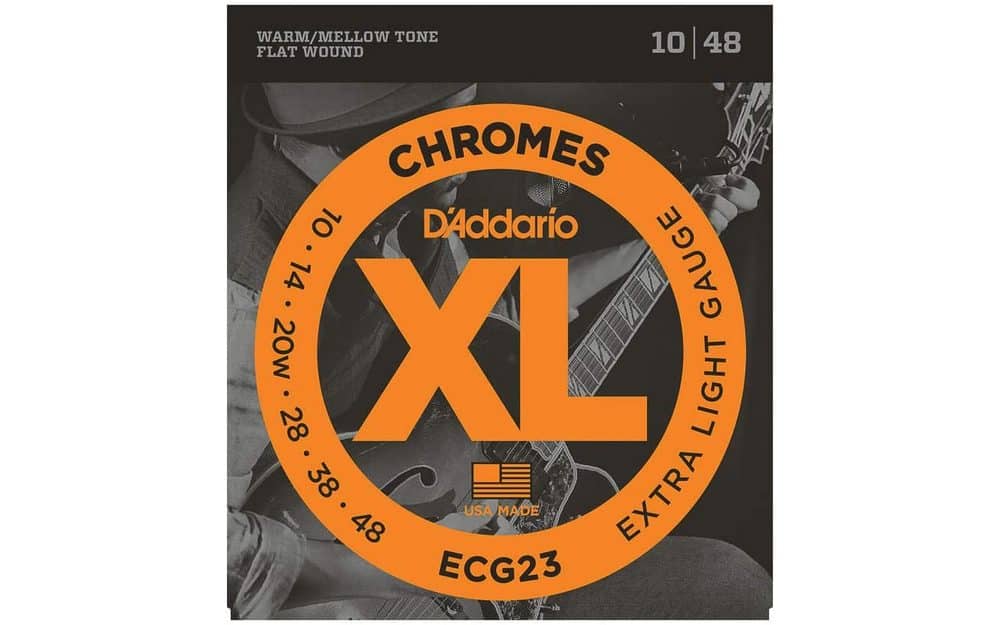 After many years of commercial success, D’Addario remains one of the best-known brands among guitar players. Their success is down to far more than just superficial branding. There’s a good reason why they’re so popular.

Their electric and acoustic guitar strings are present in pretty much any genre that comes to mind. Given their huge selection of products, it comes as no surprise that they have awesome string sets for Fender Stratocaster guitars.

Our favorite is the D’Addario’s ECG23.

Sure, they’re not exactly the cheapest strings out there. But they are worth every penny.

In fact, if you feel like smoothening out and “darkening” your otherwise bright and jangly Fender Stratocaster tone, D’Addario ECG23 strings are the way to go.

This is a plain steel string set, but what makes them special is that they have four nickel-wound strings in the set – G, D, A, and E. Such a formation gives quite a different feel to an otherwise “standard” non-wound G set.

Even better, despite “darkening” your tone a bit, these strings will still help you keep the main desirable sonic properties of your beloved Fender Stratocasters. 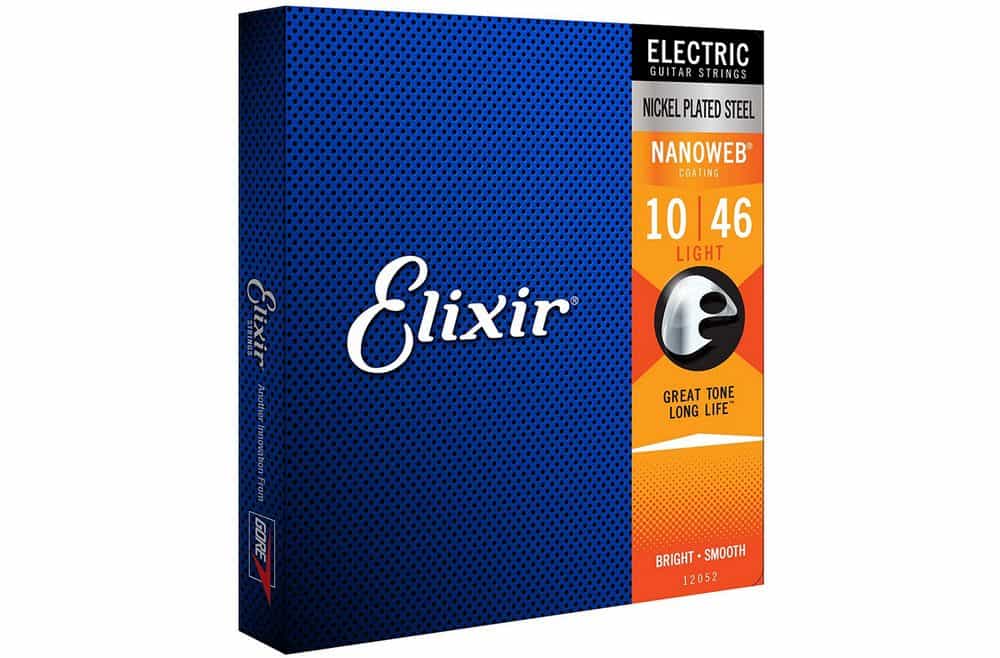 The brightness of Fender Stratocaster guitars (or pretty much any of the hundreds of Stratocaster imitations) is what most Strat fans adore.

Just hitting those strings and getting that “snappy” tone with a strong attack has a unique feel. In fact, a lot of Fender players want the tone to be as bright as possible.

The problem is that bright tone can sometimes be too difficult to control. Well, with Elixir’s Nanoweb Nickel-Plated strings, this is exactly what you can achieve.

For quite some time now, Elixir strings have been enjoying a huge boost in popularity. There are two main reasons behind it.

First, they’re very reliable and durable, and can even sound super-fresh after months of heavy use. To the very last day, they’ll sound the same as if you’ve just restrung your guitar, due to the protective layer that keeps the strings rust-free.

Second, the Elixir Nanoweb strings are fairly bright, providing you not only with a strong attack but also a great feel while you’re playing.

To put it simply, Elixir is one of the few brands that will never do you wrong. These strings are also quite cheap, but you need to buy packs of multiple strings. That shouldn’t matter, because they’re most certainly worth every single penny.

And pairing them up with your favorite Stratocaster guitar will further enhance the instrument’s tone.

Strings are one of the most neglected components among beginning and intermediate guitarists. Let’s change that.

To do so, there are several important aspects that you need to be aware of. Here are some things to consider when buying strings for a Fender Stratocaster.

The Tone That You’re Aiming For

Strats are delicate guitars, usually intended for brighter and twangier tones. However, even this type of tone has important nuances.

Do you want to smoothen it out? Do you feel like getting the best out of the instrument’s brightness?

Then go with strings that will get the tone in your desired direction.

Things can get a bit tricky with Fender Strats though, as their single-coil pickups and overall “tightness” completely dictate how they sound.

Even if you alter your amp’s EQ and add a compression pedal to the signal chain, you’ll still hear that it’s a Fender Strat.

What many people don’t know is that strings can actually change the tone a lot. You can even take that “edge” off. Or, you can further enhance the Fender brightness, if you prefer to go that direction.

String gauge is one of the most important factors to consider when buying a new set of strings for your guitar. The important thing to bear in mind here is the scale length of the guitar model that you’re playing.

The longer the neck, the higher the chances that your strings will feel tenser. Stratocasters come with a relatively longer scale length, just on the edge between regular and baritone guitars.

With their scale length of 25.5 inches, we advise getting lighter strings, probably something like 9s or 10s.

Of course, some Stratocaster players reportedly used very heavy gauges, so it comes down to personal preferences. Just know that heavier strings will make your playing experience much more complicated.

Most strings have a steel core. The three or four bottom strings are wound. These wounds can usually be pure nickel, phosphor-bronze combo, nickel-plated, maraging steel, and premium alloy.

Each of these comes with its specific sonic characteristics and overall feel. This is always noted on the individual string set package.

Do They Have A Protective Layer?

Having a protective layer not only extends the string’s life, but also makes it feel different. Additionally, protective layers will help an individual string’s tone stay fresh for as long as it remains on it.

But in some cases, the protective layer might take some of the brightness off of the tone. This isn’t necessarily a bad thing, but you should be aware of it.

Finally, the price range is usually an important consideration. Electric guitar strings tend to cost anywhere from $5 to $15. But there are some more extreme cases, both cheaper and more expensive.

With guitar strings, things are usually pretty simple. You get what you pay for.

Cheaper strings will need to be changed more often, while more expensive ones last longer. For most, the best balance is a mid-priced set.

We included a number of different varieties and budget levels in our list of recommendations. All are excellent choices, so you can’t go wrong with any. But by including many options, we hope there will be something there to meet your specific needs.