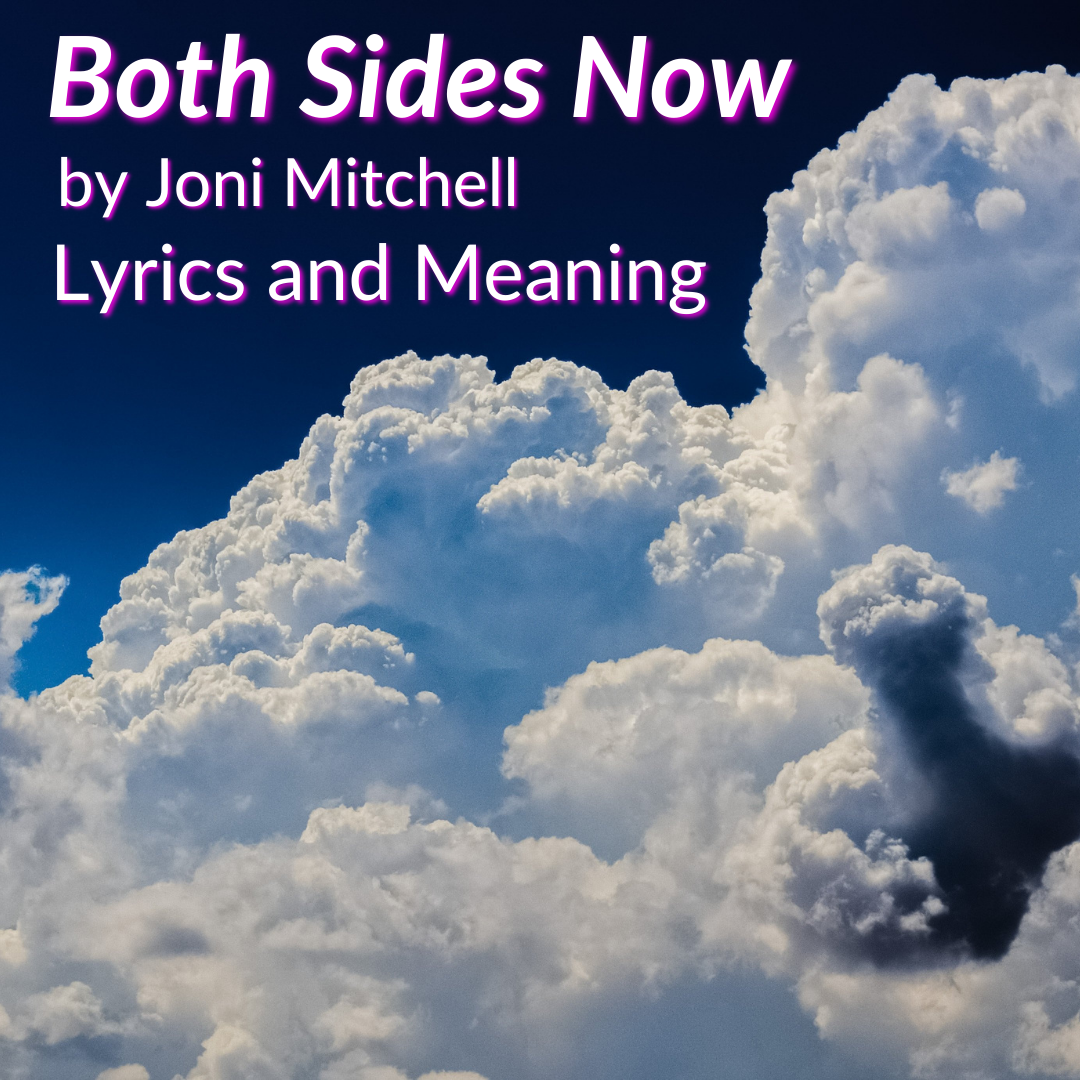 Joni Mitchell took these three common and mostly unrelated topics and intertwined them into one of her most beautiful compositions: Both Sides Now.

The song was born from a tumultuous period in her life, as is true for the majority of great art.

What exactly was going on in her life at the time?

Which book inspired this song?

How do clouds fit into the whole thing (Clouds being the name of the album, as well)?

Keep reading to learn all that and more. We will take a much closer look at the lyrics of Both Sides, Now and the meaning behind them.

Both Sides, Now Lyrics And Meaning

Joni Mitchell wrote Both Sides Now, but Judy Collins first recorded it in 1967. It was a hit, but Mitchell did not like Collins’ version, so she released her own on an album titled Clouds in 1969.

That version went on to become one of Joni Mitchells’ best known hits. Rolling Stone ranked it at number 170 on their list of the greatest songs of all time.

Where did Mitchell find the inspiration for the song and what do the lyrics mean exactly? Let’s find out. We’ll look at the lyrics first, before getting into their meaning.

I’ve looked at clouds from both sides now
From up and down, and still somehow
It’s cloud illusions I recall
I really don’t know clouds at all

But now it’s just another show
You leave ’em laughing when you go
And if you care, don’t let them know
Don’t give yourself away

I’ve looked at love from both sides now
From give and take, and still somehow
It’s love’s illusions I recall
I really don’t know love at all

But now old friends are acting strange
They shake their heads, they say I’ve changed
Well something’s lost, but something’s gained
In living every day

The song starts from a dichotomy and continues by trying to grasp certain contradictions, from how we can manage to enjoy what relationships offer when in full mourning, to how we view life when it does nothing more than whip us up.

First and foremost, Mitchell wrote an ode on maturity, about moving through everyday life with full awareness of how elusive certain moments in life are. Moments like a chat with friends or a ride on a Ferris wheel.

Both Sides Now is a song full of symbolism, existential musings, and all the idea that popped into her while listening to what those clouds had to tell her.

That is why this song is so immense. Few artists can write about those fleeting moments in life, oscillating between the tangential and the conceptual.

Inspiration Behind The Song

Mitchell was in the middle of a plane trip when she gave birth to Both Sides, Now. It happened during an exercise in contemplation. The same thing that the song refers us to, which Mitchell herself described as a ‘meditation’.

“I had such a big idea in my head about how I wanted it to be that I thought I was only going to be able to scratch the surface,” said Joni.

Roberta Joan Anderson (Mitchell’s real name) met Brad MacMath while studying art at the Alberta College of Arts, in Calgary, Aberta, Canada. After separating in 1964, she found out that she was pregnant.

As Mitchell herself would later reveal, MacMath abandoned her in the attic of a house with no money and in the middle of winter. The place had other occupants, as well. At the time, Joni was playing on small stages, still looking for her definitive place in music.

The situation was so overwhelming that she decided to give their daughter Kelly up for adoption. The two would meet again in 1997, but in the mid-60s, Mitchell’s life was marked by the sadness of not having been able to raise her daughter.

Having no contact with her little girl, she spent much of her life writing about her and for her. Both Sides, Now is no exception.

In the midst of that, Joni met musician Charles Scott “Chuck” Mitchell. She married him in 1965, at the age of 21, before leaving for Detroit. Two years later, the marriage dissolved.

Mitchell moved to New York alone with her guitar. That is where her most personal lyrics were born. She took many plane rides from there to various states, where she played to folk-rock-loving audiences.

Those plane rides were somewhat meditative for her. On the one where Both Sides, Now was born, she reading Henderson, the King of the Rain by Saul Bellow (another work marked by the impulse to find meaning in things).

It struck her that she was no looking at the clouds from above, whereas she had always looked at the from below in her youth. No previous generation had ever enjoyed the privilege to be able to do that.

That ‘now’ that Joni added after the comma depicts the desire to touch the present with her hands, to make the unattainable attainable, starting from the impossibility of embracing those clouds and concluding with a very mature statement: “I really don’t know life at all.”

Joni talks about how life is nothing more than a great illusion, and how we are mere mortals running to decipher the most incomprehensible enigmas while the days fly by and we do not stop to look at the clouds. Therefore, ‘both sides’ and ‘now’ are key.

A book and a view of clouds from above inspired Joni Mitchell to write Both Sides, Now. Beyond that, she contemplated the contradictions and duality of life, along with the intangibility of fleeting moments, in this famous song.

A completely different band that takes a look inward in one of their biggest hits is Queen. This article looks at the Bohemian Rhapsody lyrics meaning in detail.

Both Sides Now could also be a great title for a song about bisexuality, like The Neighborhood’s greatest hit. See our analysis of the Sweater Weather lyrics meaning here.

Another great song that combines love and life is MacArthur Park, first recorded by actor Richard Harris. Learn more in our breakdown of the MacArthur Park lyrics meaning.