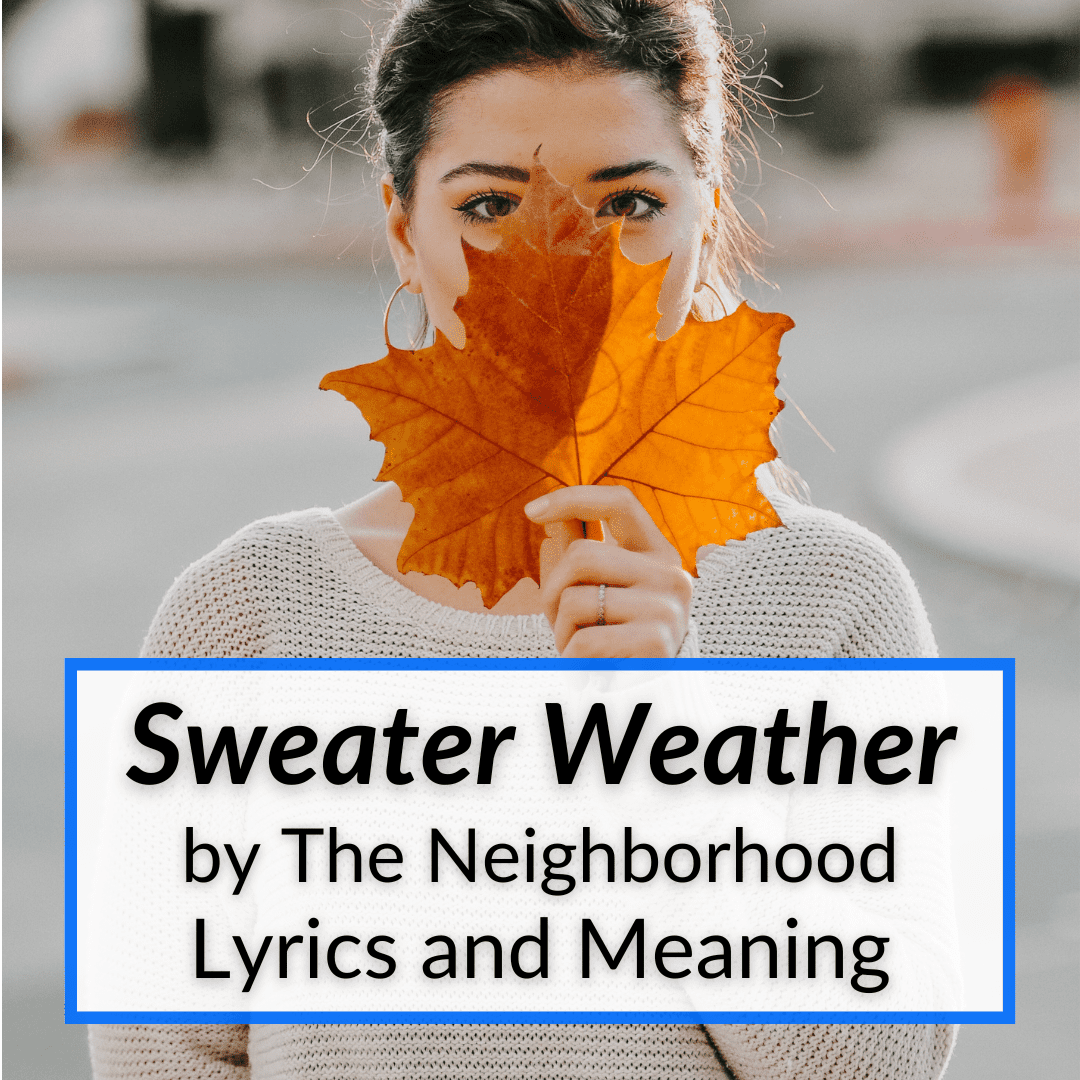 A simple pronoun switch in The Neighborhood’s Sweater Weather has led to this seemingly simple song being interpreted in many different ways.

It has also led to it becoming a “bi anthem”.

So, what was the intended Sweater Weather lyrics meaning?

And what are the various interpretations that have sprung up?

Keep reading to find out. We will do our best to make sense of the varying interpretations and clear up any confusion over what is, essentially, a fairly simple love song.

The song Sweater Weather was first released in 2012 by the band The Neighborhood. It originally gained popularity on the band’s original YouTube channel and Tumblr.

In 2021 it soared back to the top of the charts because of its popularity on TikTok. Sweater Weather is a six-time platinum record and The Neighborhood’s most popular song.

On both Tumblr and TikTok Sweater Weather was used by users to reference their sexuality. In 2021 it was declared the ‘Bi Anthem’. Users posted the song or wrote “Sweater Weather” in a caption to come out as bisexual.

The Neighborhood has never stated the song was about bisexuality, however, some of the genderless lines within the lyrics have listeners interpreting it as such. In fact, the song’s most recent return to the Billboard Chart is solely due to the LGBTQ+ Community’s use of it on TikTok.

And all I am is a man
I want the world in my hands
I hate the beach but I stand
In California with my toes in the sand
Use the sleeves of my sweater
Let’s have an adventure
Head in the clouds but my gravity’s centered
Touch my neck and I’ll touch yours
You in those little high waisted shorts, oh

‘Cause it’s too cold for you here
And now, so let me hold
Both your hands in the holes of my sweater

And if I may just take your breath away
I don’t mind if there’s not much to say
Sometimes the silence guides a mind
To move to a place so far away
The goosebumps start to raise
The minute that my left hand meets your waist
And then I watch your face
Put my finger on your tongue
‘Cause you love the taste, yeah
These hearts adore
Everyone the other beats hardest for
Inside this place is warm
Outside, it starts to pour

Comin’ down
One love, two mouths
One love, one house
No shirt, no blouse
Just us, you find out
Nothing that I wouldn’t wanna tell you about
No, no, no

Due to its popularity in the LGBTQ+ community, this song has been interpreted in several different ways. It seems that each line has a double meaning depending on the perspective of the listener.

This is a humbling line. It says that there is nothing special about him, that he is a man of simple means. It also states that he wants more out of his life. Whether that is desire for success, love, understanding, or power is unclear.

This line implies the singer and the song’s subject do not live near each other. He hates the beach but has gone there just to see the person he loves. Regardless of where he is, being with the person whom he cares about is the most important thing.

Oh, she knows what I think about

This line has been interpreted in several ways by listeners. Some think that this simply means he is singing to a girl whom he really likes or is really attracted to and that she knows how he feels. This line has been considered an innuendo for intimacy.

Others have noted that in previous lines the word “you” was used and now “she” is used. There are theories that this song actually involves 3 people. The “you” is a man and the “she” is obviously a woman.

The theory is that Jesse (the male singer) is in a relationship with a woman who knows he is also sexually attracted to men. By following these observations, Sweater Weather could be considered a confessional rather than a love song.

Inside this place is warm
Outside it starts to pour

Life is hard or being alone is hard. There is also an implication that they are not accepted by society or struggle with who they are as individuals.

This line has also had conflicting interpretations, because it is unclear who the singer considers being safe or “warm”. Is it the man or the woman?  Or is there only one subject of the song?

In short, Sweater Weather by The Neighborhood is irrefutably about love and physical attraction. The muse of the song is unclear. However, there are clear references to sexual attraction and intimacy.

It also seems that the singer is emotionally unavailable in some way. Whether that is regarding personal identity, emotional availability or commitment to another is undefined.

Another great song about a love affair comes from Harry Potter actor Richard Harris (really!). See our look at the lyrics and meaning of MacArthur Park for more.

Quick, what’s the biggest gay anthem ever? There are a number of songs to choose from, but chances are many people will say Y.M.C.A. by Village People. We also did a breakdown of the YMCA lyrics meaning.

Finally, we have one of the biggest hits of all time that also happens to be about bisexuality. Learn all about the Poker Face lyrics meaning here.