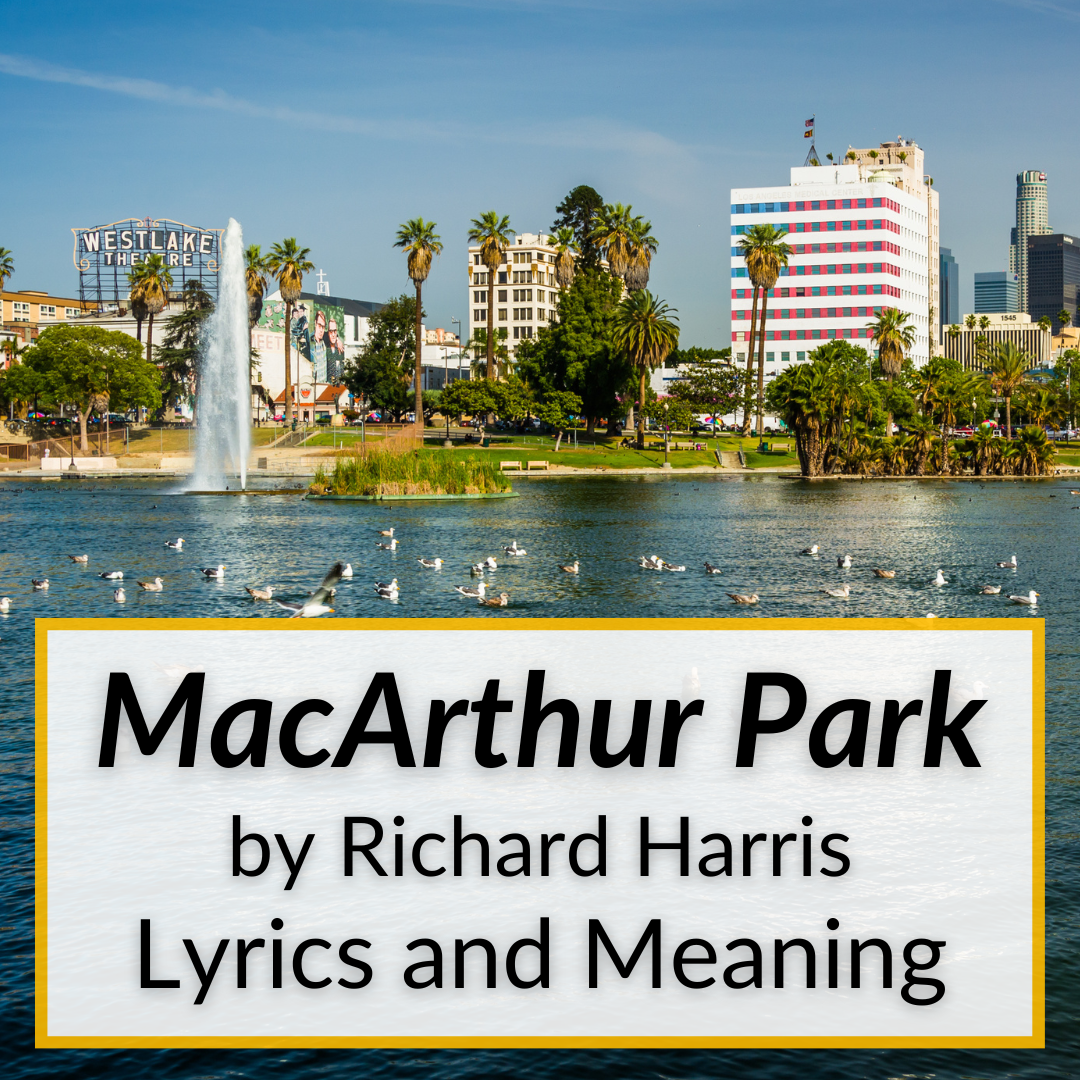 MacArthur Park is an actual park in Los Angeles, California.

And the song MacArthur Park is about that park.

But it is, in essence, a love song.

A love song about a park?

No, not exactly. The song is about the park, but it is also about the writer’s love for a woman.

Keep reading to learn exactly what the Mac Arthur Park lyrics meaning is. We’ll also explain how the length was kind of an “F you!” to the record executives.

MacArthur Park was penned by American singer-songwriter Jimmy Webb at the behest of producer Bones Howe in 1967. They originally intended for it to be recorded by the band The Association.

The band was not overly impressed with the song’s ambitious arrangement and unorthodox lyrics and duly rejected the chance to record it.

Instead, the first recording of the song was made by Irish actor and singer Richard Harris. It was released the following year, in 1968, and reached number 2 on the US, and number 4 on the UK, singles charts.

MacArthur Park is an actual park in Los Angeles. It was across the street from where Webb’s then-girlfriend, Susie Horton, worked.

The couple would meet regularly for lunch in the park. Upon their breakup, Webb was heartbroken. He wrote the song as a lament for that love lost.

Let’s take a look at the complete lyrics to MacArthur Park, before going into our analysis of their meaning.

Spring was never waiting for us, girl
It ran one step ahead
As we followed in the dance
Between the parted pages and were pressed
In love’s hot, fevered iron
Like a striped pair of pants

MacArthur’s Park is melting in the dark
All the sweet green icing flowing down
Someone left the cake out in the rain
I don’t think that I can take it
‘Cause it took so long to bake it
And I’ll never have that recipe again, oh no

MacArthur’s Park is melting in the dark
All the sweet green icing flowing down
Someone left the cake out in the rain
I don’t think that I can take it
‘Cause it took so long to bake it
And I’ll never have that recipe again, oh no

MacArthur’s Park is melting in the dark
All the sweet green icing flowing down
Someone left the cake out in the rain
I don’t think that I can take it
‘Cause it took so long to bake it
And I’ll never have that recipe again
(Oh no, oh no)

MacArthur Park was a little unusual in terms of its length, arrangement, and some of its lyrics. At almost seven and a half minutes, it was much longer than the average pop song of the era.

Rumor has it that Webb was annoyed by British record executives, so he extended the song past seven minutes, with the intention that it would cause problems for the executives trying to get the song radio airtime at first.

The song’s arrangement was notable for being quite complicated, with time changes and a classical structure featuring several movements.

But it was some of the song’s seemingly odd lyrics that caught the public’s imagination, with the chorus in particular sparking debate as to its meaning:

Someone left the cake out in the rain
I don’t think that I can take it
‘Cause it took so long to bake it
And I’ll never have that recipe again.

Listeners the world over were confounded by this lyric and drove themselves crazy trying to decipher its meaning. The songwriter himself had this to say regarding the infamous “cake in the rain” lyric:

“I’ve also tried to tell the truth, which is that it’s just a song about a girlfriend of mine, Susie Horton, and this place on Wilshire Boulevard where we used to have lunch, which is called MacArthur Park. And the truth is that everything in the song was visible. There’s nothing in it that’s fabricated. The old men playing checkers by the trees, the cake that was left out in the rain, all of the things that are talked about in the song are things I actually saw. And so, it’s a kind of musical collage of this whole love affair that kind of went down in MacArthur Park.”

And there you have it—straight from the horse’s mouth. Susie Horton may have broken Webb’s heart when she ended the relationship, but in doing so, she indirectly gave the world MacArthur Park.

Jimmy Webb wrote MacArthur Park and Richard Harris was the first one to record it, although many artists have covered it since.

The song was unusual for its time, in terms of the length, the arrangement, and even the lyrics. Those lyrics are basically about a park, but the song is also a love song.

Another song about a relationship ending is one of The Rolling Stones’ biggest hits. Take a look at our analysis of the Wild Horses lyrics meaning here.

The meaning of the Whiter Shade Of Pale lyrics has been hotly debated for decades. What we know for sure is that it is about a young couple at a party. The debate concerns how their relationship progresses.